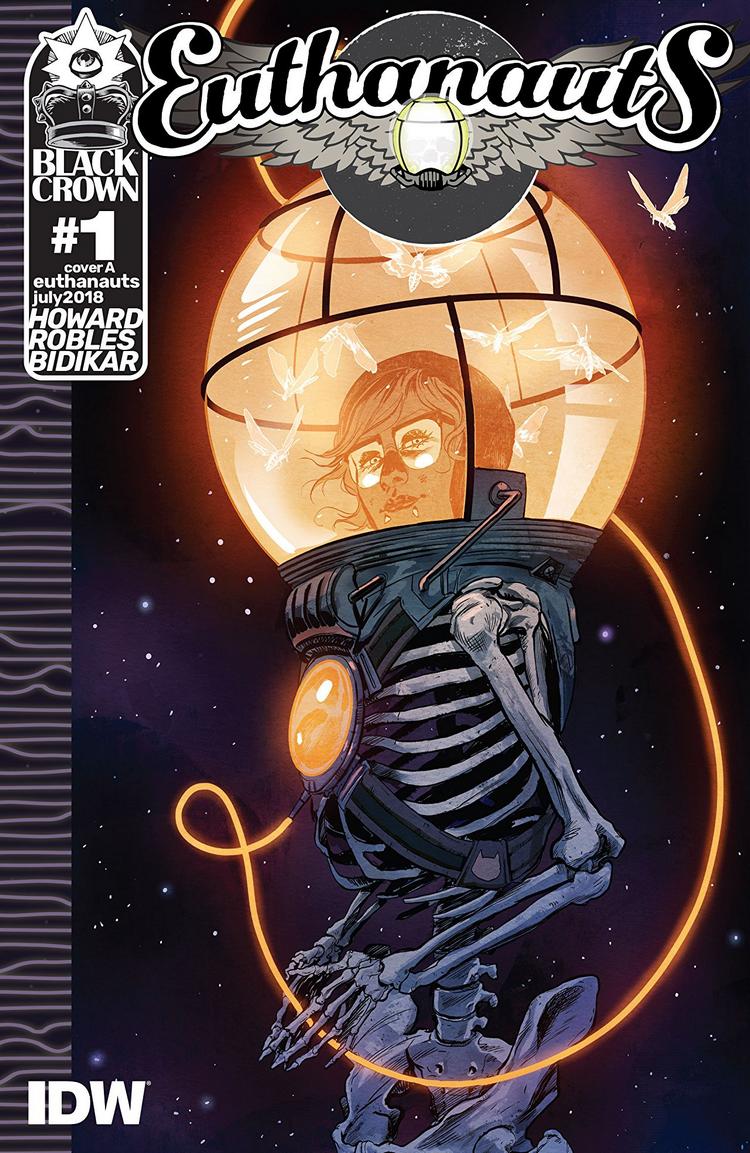 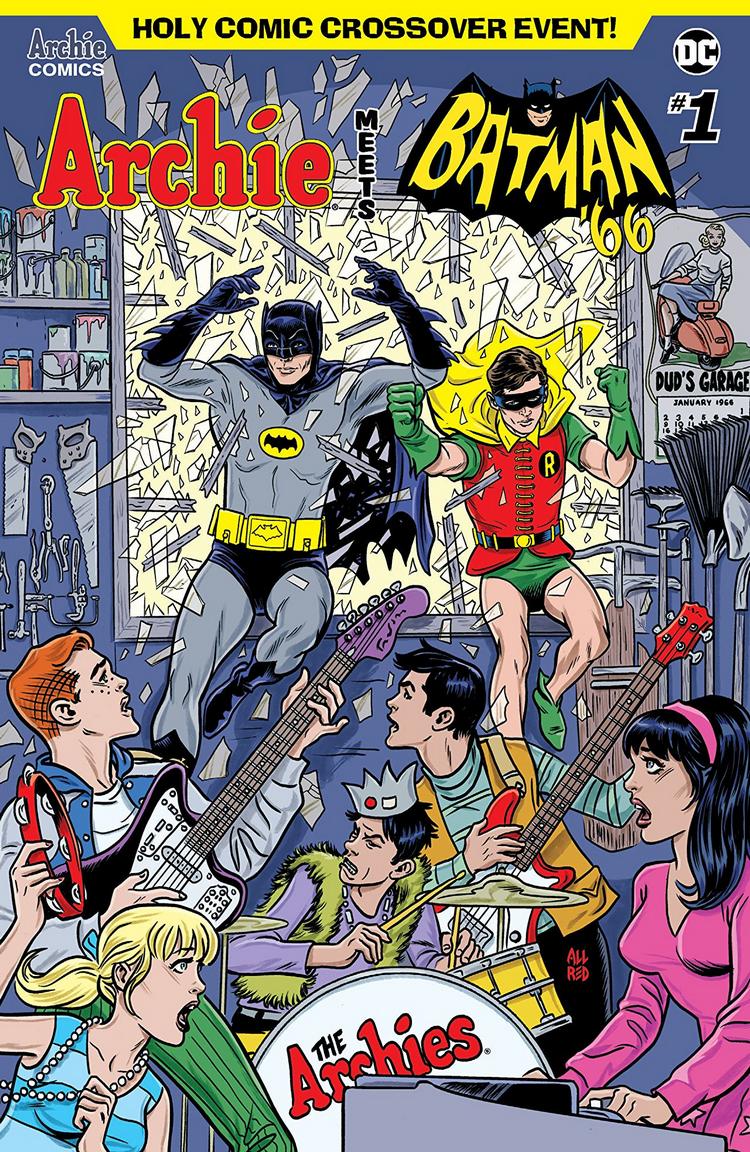 Two iconic comic book characters meet up for the FIRST TIME in this historic crossover mini-series! A battle in Gotham City extends its reach into Riverdale-with Mr. Lodge becoming enemy #1 of the dynamic duo! Now it’s up to Veronica to recruit some help and place a call… to the Batcave!

Why It’s Hot: The inherent campiness of the classic TV Dark Knight combined with traditional take on Riverdale’s favorite son make Archie and Batman a perfect match. With this group of amazing creators taking on two of comic’s most iconic characters you couldn’t ask for more from this company crossover extravaganza. 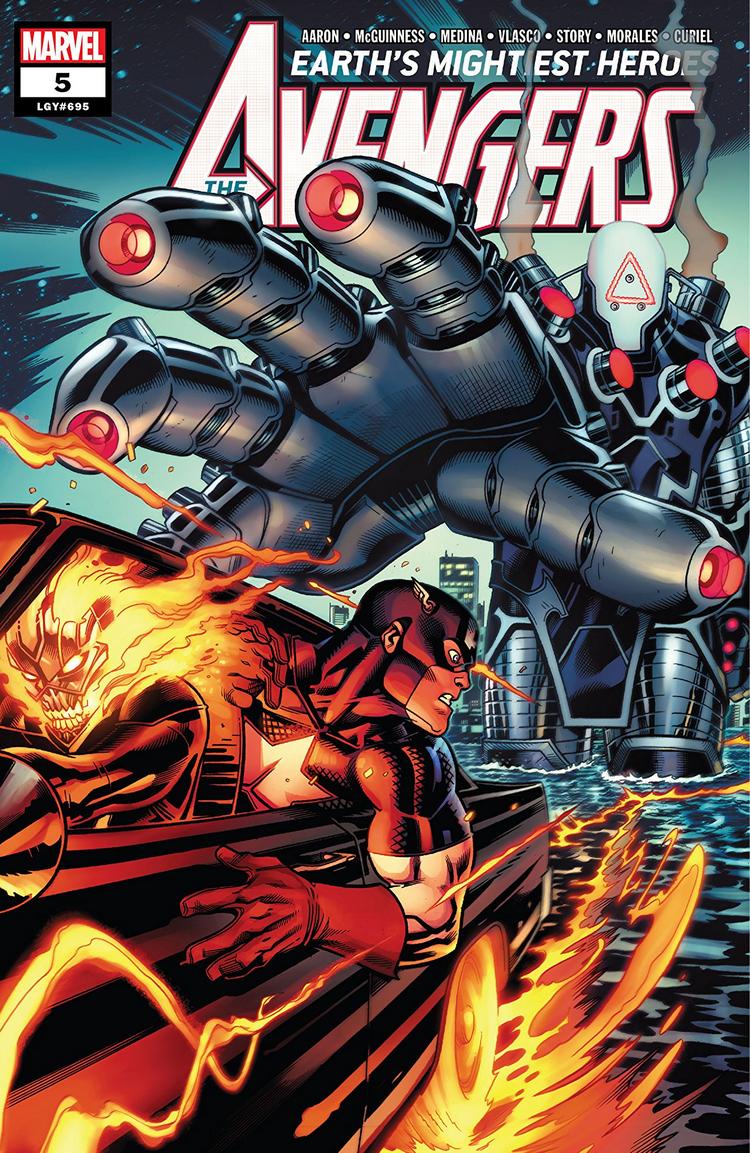 Behold the wildest, most awe-inspiring team of Avengers ever assembled! But will it be enough to defeat the combined powers of Loki and the Final Host of Dark Celestials? And what is the startling secret of the Progenitor?

Why It’s Hot: After four solid, but not spectacular issues Jason Aaron and company deliver on the promise of what this Avengers run could be. There are game changing reveals about the origin of the Marvel Universe, big battles, heroes starting to realize their potential, and a final stretch that will have you pumping your fists until the sixth issue arrives. 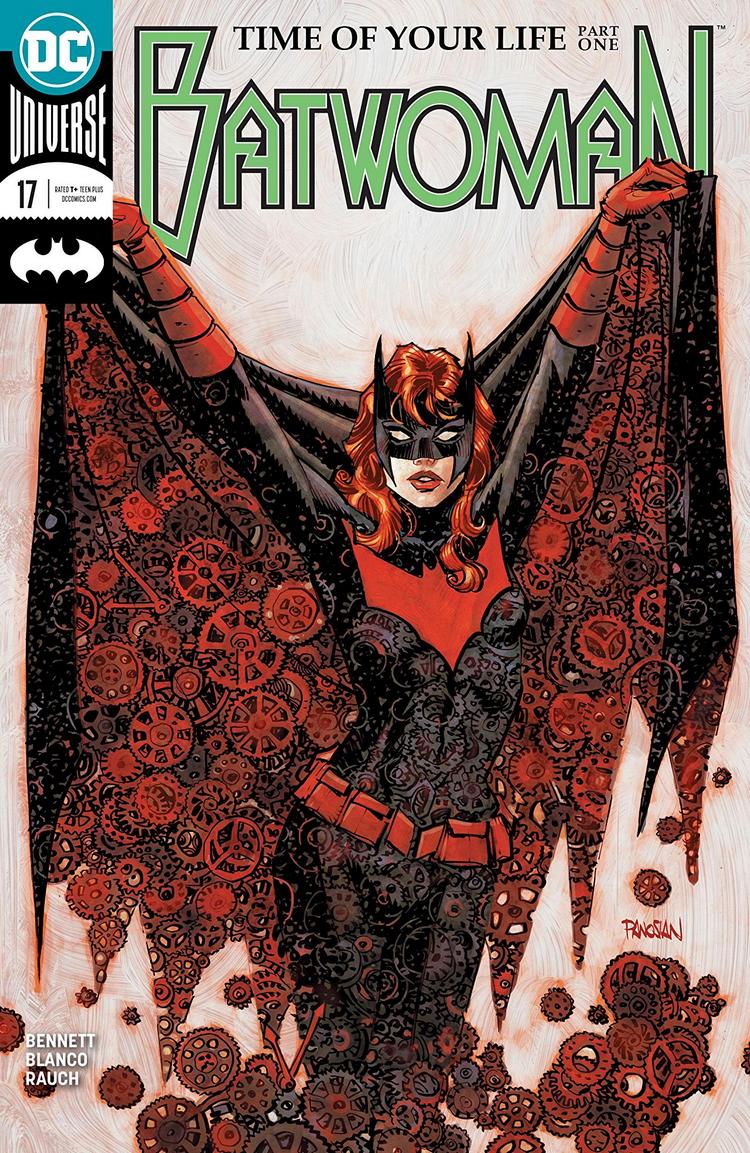 Kate Kane’s latest assignment is leaving her cold-it’s a cold case that forces her to team up with GCPD Detective Renee Montoya, and which, as usual, has Gotham City running out of time. Is this the start of a beautiful crime-fighting partnership? No spoilers, but expect sparks and punches to fly!

Why It’s Hot: Hot off the reports that Batwoman is getting her own TV show and Renee Montoya will be in the Birds Of Prey movie what better way to celebrate than to read the only comic this week with both characters? If you don’t know why fans are so excited about these characters here’s your chance! If you aren’t about anything other than comics then just ignore everything above. except the part about Kate and Renee being in the same comic this week!

Death is like outer space-a seemingly unknowable, terrifying blackness that yields beautiful discoveries and truths-if only you’ve got the right kind of rocketship. Thalia Rosewood has had a lifelong obsession with death, keeping her from living her life to the fullest. Mercy Wolfe has a brain tumor the size of a billiard ball, and a need for a new recruit before her next journey begins. Inigo Hanover is a reluctant tether to the world beyond, seeking to continue a cycle that exploration would halt. Go toward the light. Then go beyond. EUTHANAUTS.

Why It’s Hot: This comic is really good and you should buy it. No, but it all seriousness what Shelly Bond has put together with Black Crown has been one of the most impressive editorial feats in recent comic memory. Every book coming from the nascent imprint has fit a certain aethestic and has been really well done. Based on the high concept alone this new series from Tini Howard and Nick Robles may be the most exciting entry yet. 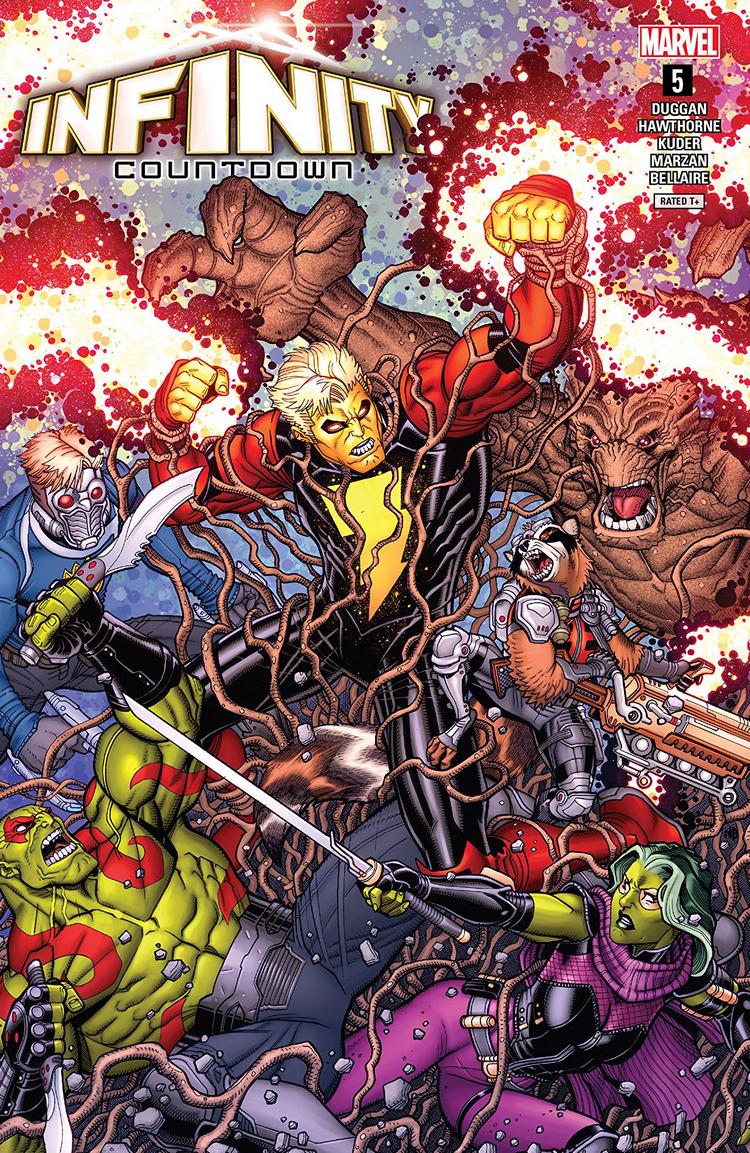 THE COUNTDOWN CONCLUDES!
The battle for Infinity among the stars comes to its dramatic conclusion, and all the stones are in place to bring the INFINITY WARS to Earth!

Why It’s Hot: Now THIS is how you build towards an event. Everything from the moment Gerry Duggan and Aaron Kuder began their Guardians of The Galaxy run has been slowly building towards Infinity Wars, and that build comes to a head in this issue. While the big event that this series is counting down to doesn’t start until next week that doesn’t mean big Duggan and his partners on the art side of things have done an amazing job in organically moving towards this huge story while telling some of the best stories Cosmic Marvel has ever seen. Not to mention this entire run may be the single best Guardians of the Galaxy story ever, and a lot comes to a head in that department here. On top of that they’ve added Adam Warlock, Pymtron, Silver Surfer, Black Widow, Doctor Strange, Captain Marvel, Turk Barrett (!), Galactus, and more as the story got bigger and bigger. They did all of this while keeping the stories accessible as they go, which is an impressive feat in itself. The end result has been the raising of the bar when it comes to launching an event, and this issue will leave you really excited for Infinity Wars: Prime in a week’s time. 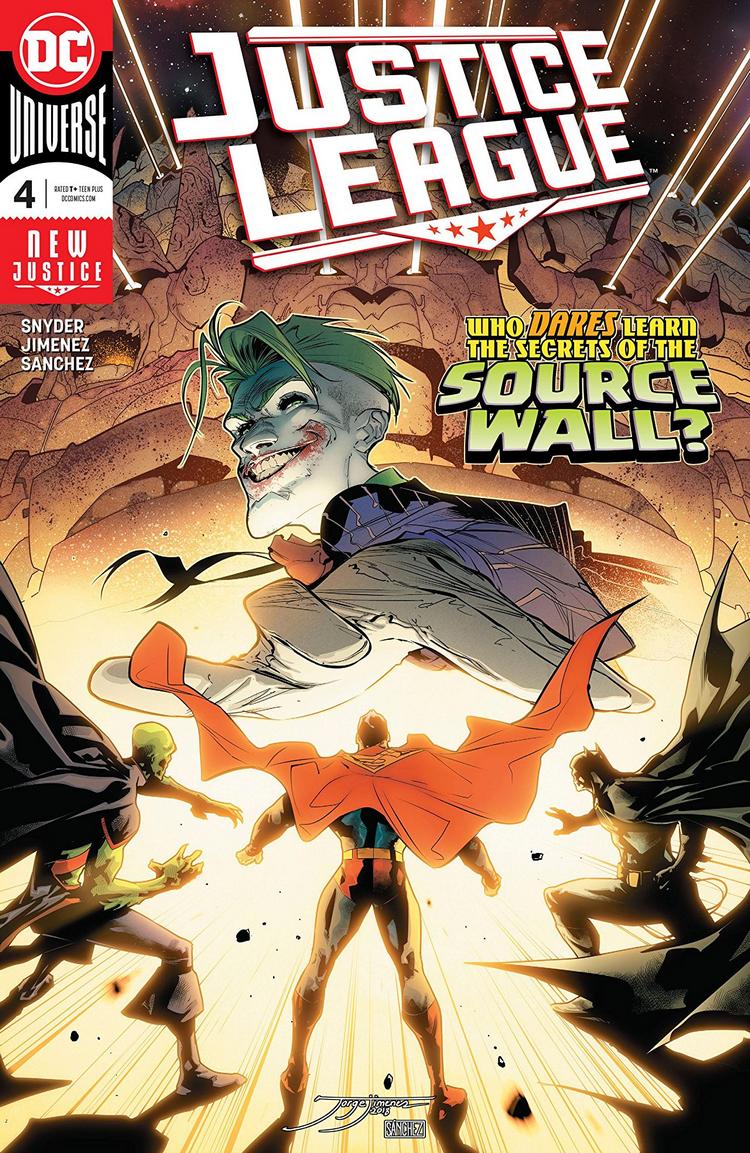 What is hidden in the darkest depths of the ocean and farthest reaches of space doesn’t even compare to the insidious secrets buried in the pasts of Flash, Green Lantern, and Martian Manhunter! While the rest of the League battles to save their friends before all of reality unravels, the citizens of Earth make a startling decision…to join the Legion of Doom!

Why It’s Hot: It may only be four issues deep as of this week, but this Justice League run is amazing. I really don’t know what more I can say that I haven’t already said, but there’s no way I’m keeping a superhero comic this good off of this list because I’m afraid to repeat myself. Snyder, Jimenez and the entire team continue to tell the biggest story DC has going right now. This is a story that is changing the DCU with big idea after big idea that keep on topping the big ideas that came before. More has happened in the first few issues of this series than in a year’s worth of stories in other books. If you’re a DC fan you need to be reading this comic. 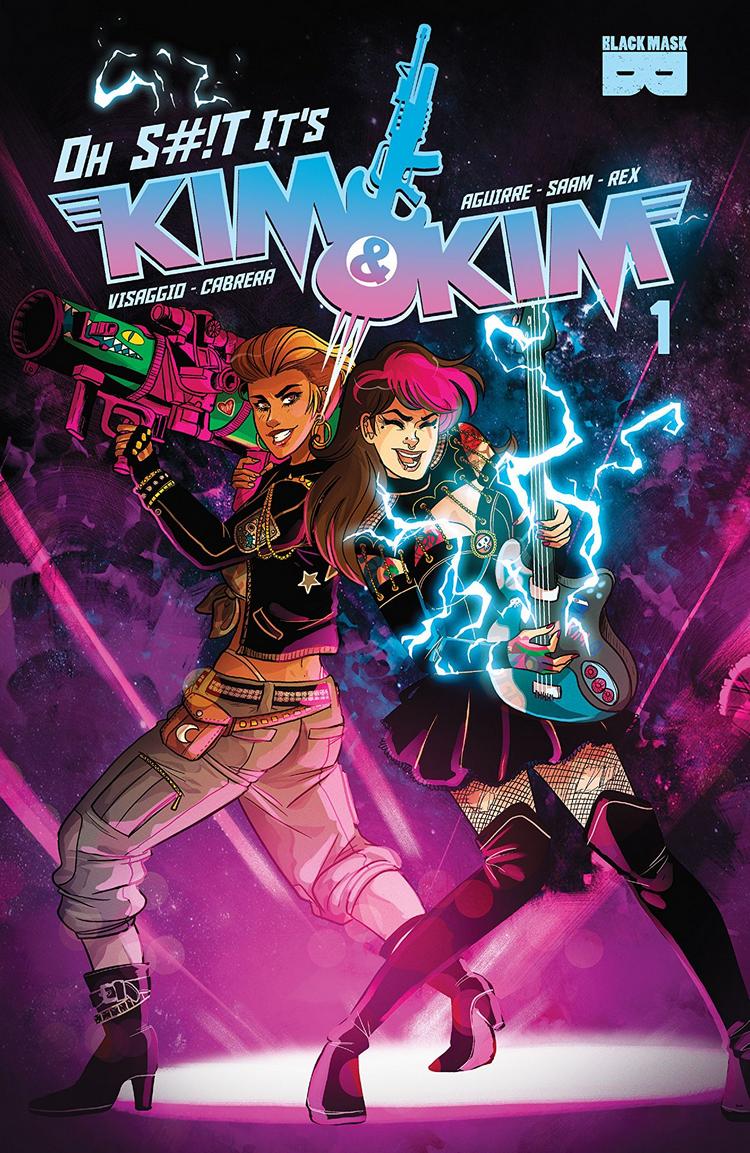 The Fighting Kims are back! Kim & Kim trade their denim vests and spiked chokers for tuxes and gowns as they infiltrate the glitzy space colony of Santa Palma to try and con a master thief. But, as usual, everything goes to hell… and it’s definitely Kim Q’s fault. Come on, Kim. Get your life together. A brand new ongoing series from writer Magdalene Visaggio, artist Eva Cabrera, colorist Claudia Aguirre, letterer Zakk Saam, and editor Katy Rex, the original creative team behind the GLAAD & Eisner nominated Kim & Kim!

Why It’s Hot: They’re back! The critically acclaimed, fan favorite comic from Black Mask returns this week! This is the series that put Magdalene Vissagio on the map, and there’s a good reason why. Everything about this comic’s creative team is a perfect match for these characters and concept. If you’re a new fan of Visaggio through her recent work at other publishers this is the time to experience the writer at her most pure and unfiltered, as the Kims continue to traverse the universe with trouble never far behind. 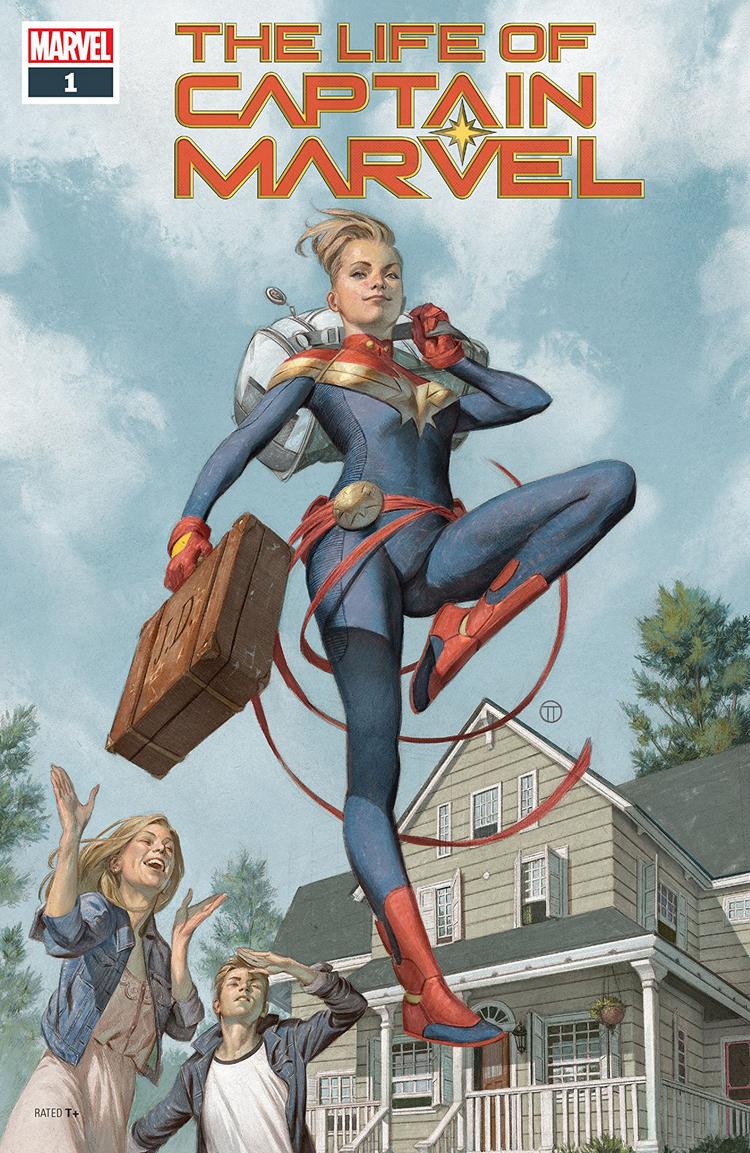 THE DEFINITIVE ORIGIN OF CAPTAIN MARVEL!

Carol Danvers was just a girl from the Boston suburbs who loved science and the Red Sox until a chance encounter with a Kree hero gave her incredible super-powers. Now, she’s a leader in the Avengers and the commander of Alpha Flight. But what if there were more to the story? When crippling anxiety attacks put her on the sidelines in the middle of a fight, Carol finds herself reliving memories of a life she thought was far behind her. You can’t outrun where you’re from – and sometimes, you HAVE to go home again. But there are skeletons in Captain Marvel’s closet – and what she discovers will change her entire world. Written by best-selling author Margaret Stohl and drawn by fan-favorite comics veteran Carlos Pacheco, this is the true origin of Captain Marvel.

Why It’s Hot: Launching at a perfect time to have the collection in stores by the time a certain movie comes out in March, The Life And Times Of Captain Marvel begins to unravel the secret origin of Carol Danvers, and it begins with her family. This issue may be emotionally tough to read for some, but just might be my favorite issue ever to star Carol. There is a lot of excitement for this series from fans of the character, and in my humble opinion Stohl, Pacheco, Sauvage, and everyone involved has made sure this first issue more than lives up to the hype.