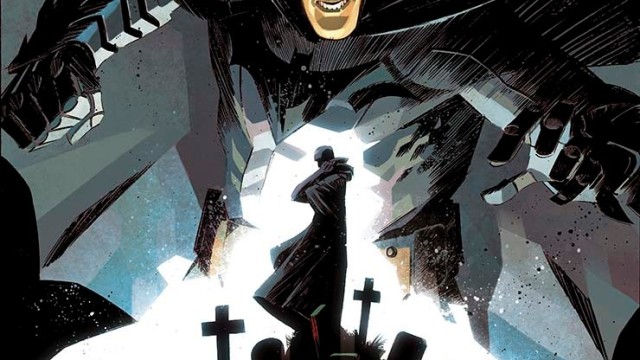 ZERO YEAR is over, and the events of BATMAN: ETERNAL have put Gotham City in a tailspin, but Batman is focused on finding a killer who has haunted his hometown in secret for years. This special issue features art by Matteo Scalera (DEADPOOL, Black Science) and sets the stage for the next major Batman story in the fall.

Why It’s Hot: Month after month Batman finds its way onto this list, as it is consistently one of the best comic books released every month. The critically acclaimed and much beloved Zero Year story has come to an end. After a year spent exploring the Dark Knight’s early days, Scott Snyder provides a great jumping on point set in he present day. Joining the creative team for this issue is an artist that is no stranger to the Hot Five in Matteo Scalera.

Years have passed since the monster apocalypse nearly destroyed mankind. Now it is merely a distant, nightmarish memory for Hiroshi, an elder in one of the few remaining tribes of humans. Little does Hiroshi know that the apocalypse is not over, and that his memories of the past may yet save the future!

Why It’s Hot: A new era of Hulk begins as rising star writer Gerry Duggan, and th ever dependable Mark Bagley, set out to tell a Hulk story unlike any that has come before it. We’ve seen Duggan’s versatility on books such as Nova and Deadpool, and it will be exciting to see what he has in store for the Incredible Hulk.

Jon breaks into Kegelface’s house and oh my golly what on EARTH do you think he finds there. Not only are our beloved Sex Criminals not alone…they’re not unwatched, either. And Suzie learns once and for all the fate of her precious library.

Why It’s Hot: Fraction and Zdarsky have taken a ridiculous idea that on paper looks as if it has no business existing, and they have turned it into one of the best comic books in the industry. There are laughs, action, humor, sex, and genuine emotion to be found in each and every issue of Sex Criminals. This is one book that is not to be missed!

FROM THE EXECUTIVE PRODUCER OF TV’s “ARROW”!

• NEW CREATIVE TEAM! And a new mission for the first all-female team of X-MEN…

• S.W.O.R.D. is Earth’s premiere counterterrorism and intelligence agency when it comes to dealing with extraterrestrial threats.

• But when the ferocious Shi’Ar warrior Deathbird lands on their doorstep at the brink of death, S.W.O.R.D. calls in the X-MEN to investigate!

• But are the X-Men equipped to handle the horrific new threat that’s emerged from the edge of space?

Why it’s Hot: A new creative team joins the all female X-Men as the cast heads off for a classic X-Men space adventure. With all the talk about the representation of female superheroes in comic books, and other mediums, this book has quietly existed under the radar for the past year and a half. Space? Bad-ass female characters? A new creative team? All of this adds up to an issue that serves as a natural jump on point that isn’t to be missed!