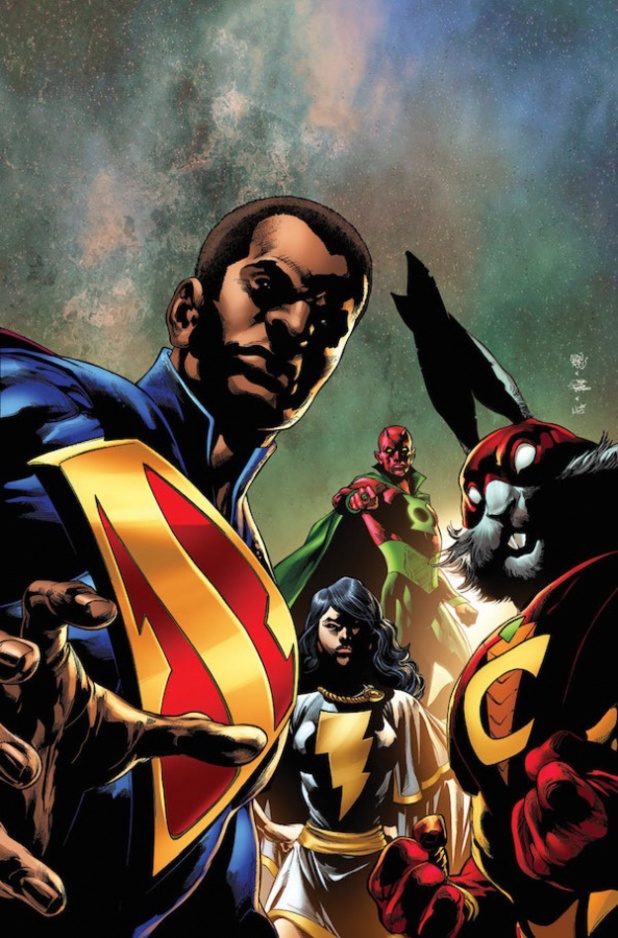 Diana Dane is being transported by Darius Dax in the hunt for the mysterious Ethan Crane. It’s a car ride that takes her a lot further than she expects: out into the nature of the universe itself.

Why It’s Hot: After the resounding creative success of the first issue, Warren Ellis and Tula Lotay dive even further into the deep end of craziness in Supreme: Blue Rose. Warren Ellis is one of the great writers of this generation (this Hot Five seems to be full of legends). He is at his best when dealing with the metaphysical, the exact type of story featured in this book. Ellis’ theoretical science is second to none, and has resulted in some amazing stories throughout the years. The second issue of Supreme: Blue Rose is a smart, and challenging comic book, featuring amazing artwork from Tula Lotay that will leave you wanting more. This is quintessentially Warren Ellis and it is wonderful.

Confrontation! Devastation! Inebriation! (And the lost secret of the hobos too!) Oh dear God no, you’d better get out of the way…because here come the Delinquents!

Quantum and Woody are the world’s worst superhero team. Archer & Armstrong are a mismatched pair of conspiracy-busting adventurers. When a mysterious force collides these ill-suited and irresponsible “heroes” for a cross-country race through the darkest corners of American mythology, all hell is bound to break loose. Can two busted pairs become four of a kind in time to defeat the Hobo King, save the day, and make it back home in time for happy hour? Let’s hope so…’cause these guys make a really, really bad team. (And you don’t even want to know about the goat.)

Why It’s Hot: Valiant’s two premiere duos team up for an insane mini series event! It’s Archer & Armstrong, Quantum & Woody, Asmus & Van Lente, and they’re all in one comic! This is going to be one wild ride, and you’re not going to want to miss out.

The first project from their groundbreaking five-year deal at Image will have ED BRUBAKER and SEAN PHILLIPS fans, old and new, at the edge of their seats, as they weave an epic crime story unlike anything they’ve done before.
Hollywood – 1948. A noir film stuck in endless reshoots. A writer plagued with nightmares from the war and a dangerous secret. An up-and-coming starlet’s suspicious death. And a maniacal Studio Mogul and his Security Chief who will do anything to keep the cameras rolling before the Post-War boom days come crashing down. THE FADE OUT is the most ambitious series yet from the award-winning Noir Masters.
Bonus: This 40-PAGE FIRST ISSUE features more story pages, as well as exclusive back pages articles that are only in these single issues!

Why It’s Hot: Well that didn’t take long. With their last series, Fatale, wrapping up less than a month ago, Ed Brubaker and Sean Phillips are already back with a new series! These two men are among the best in the industry on their own, and when they work together they just might be the greatest creative team working together today. The creative triumphs continue in The Fade Out, a noir tale about the dark side of post war Hollywood. This debut issue is exactly the masterpiece that we’ve all come to expect from Brubaker and Phillips. 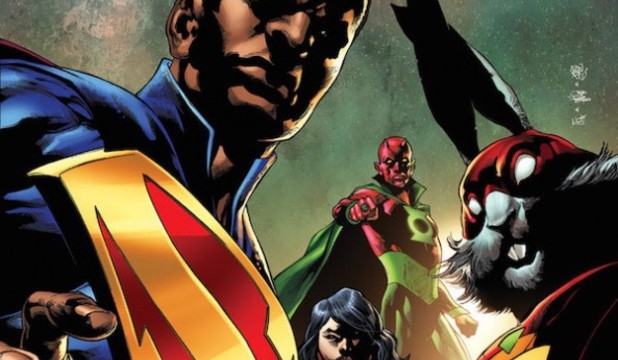 The biggest adventure in DC’s history is here!

Join visionary writer Grant Morrison, today’s most talented artists, and a cast of unforgettable characters from 52 alternative Earths of the known DC Multiverse! Prepare to meet the Vampire League of Earth-43, the Justice Riders of Earth-18, Superdemon, Doc Fate, the super-sons of Superman and Batman, the rampaging Retaliators of Earth-8, the Atomic Knights of Justice, Dino-Cop, Sister Miracle, Lady Quark, the legion of Sivanas, the Nazi New Reichsmen of Earth-10 and the latest, greatest Super Hero of Earth-Prime: YOU!

Comprising six complete adventures – each set in a different parallel universe – plus a two-part framing story and a comprehensive guidebook to the many worlds of the Multiverse, THE MULTIVERSITY is more than just a multipart comic-book series. It’s a cosmos spanning, soul-shaking experience that puts YOU on the frontline in the Battle for All Creation against the demonic destroyers known as the Gentry!

In issue #1, pencilled by superstar artist Ivan Reis (AQUAMAN, JUSTICE LEAGUE), President Superman of Earth-23 uncovers a threat to all Reality so apocalyptic it will take a team of incredible heroes from across the Multiverse to face it – including Captain Carrot, like you’ve never seen him before!

But even with a multitude of alternate worlds to choose from, where every variation is possible, can anyone hope to prevail against the onslaught of ultimate evil and undying hatred – in the unstoppable form of a one-time cosmic defender with unimaginable powers?! Join us, if you dare, for the beginning of THE MULTIVERSITY!

Why It’s Hot: It’s here. Literally years in the making, one of the most anticipated comic books in recent memory is finally hitting the stands. Legendary writer Grant Morrison teams up with some of the greatest artists in the industry to tell a universe spanning, quantum theory inspired epic. If you haven’t been following the creation of Multiversity it is time to get excited. The series is nine issues long and features two bookend issues (just like Seven Soldiers), and a guidebook to the Multiverse. The middle six issues will be essentially standalone adventures of a different Earth residing in the DC Multiverse. On the art side you can expect some of the biggest names around, many of which are frequent Morrison collaborators. The great Ivan Reis kicks things off with the forty page introduction issues, and in subsequent months you can look forward to stories with art by Chris Sprouse, Frank Quitely, Cameron Stewart, Frazer Irving, and Ben Oliver. Morrison is pulling from the vast history of DC Comics while developing his own ideas to create something that promises to be truly special. Prepare for big adventure, and mind bending concepts that can only come from the crazy mind of Grant Morrison. If you couldn’t tell, I’m excited, and I hope you are too.

Laura has no choice. She has to go underground to find the goth-goth-gothity-goth of the Morrigan. Is this the most ill-advised underworld-related decision since Orpheus decided to see how Eurydice was doing in the back seat? To find out, read the comic that people are literally calling “The one by GILLEN/McKELVIE/WILSON with the very long title.”

Why It’s Hot: Gillen and McKelvie have taken the comic book world by storm with The Wicked + The Divine. This book is the total package from one of the best creative duos in comics. Brubaker and Phillips are featured earlier in this week’s column, and when making a list of today’s best writer/artist combination, Gillen and McKelvie would be right up there with those two. They are THAT good, and it shows in their work. It shows in the continuity between the script and art. Then you throw in the stellar, nearly unparalleled color art of Matt Wilson as the sweet, sweet cherry on top. It’s no surprise that this book is that good.