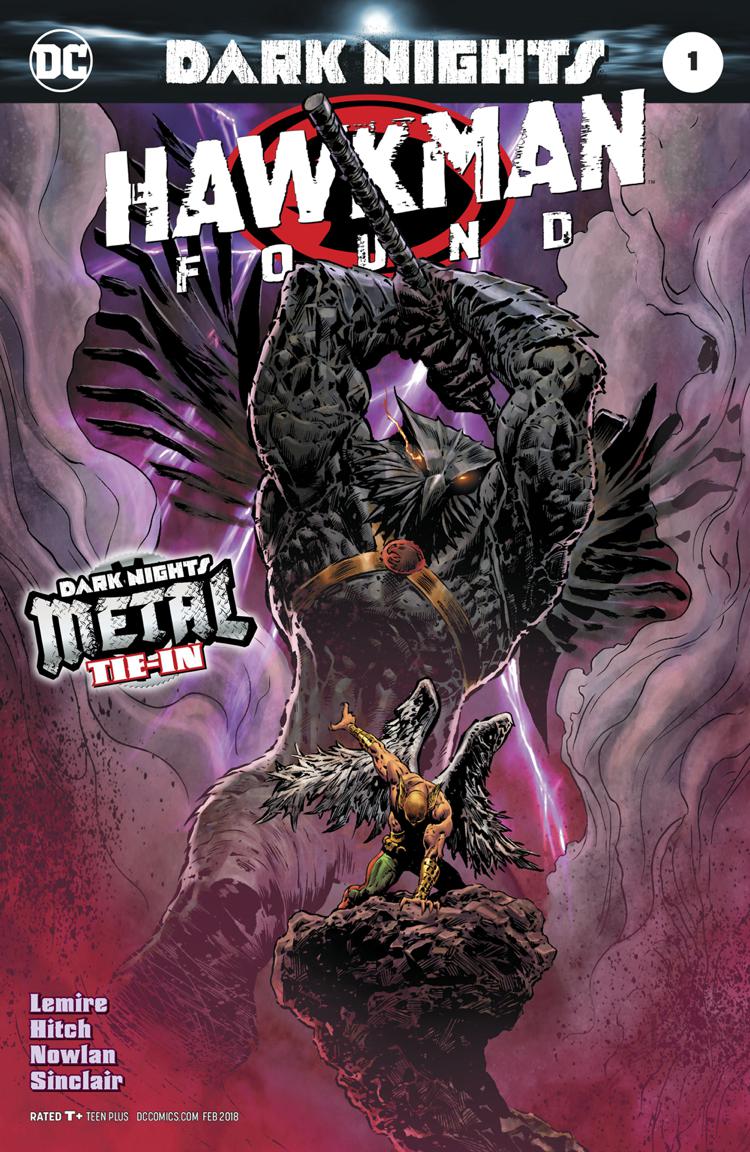 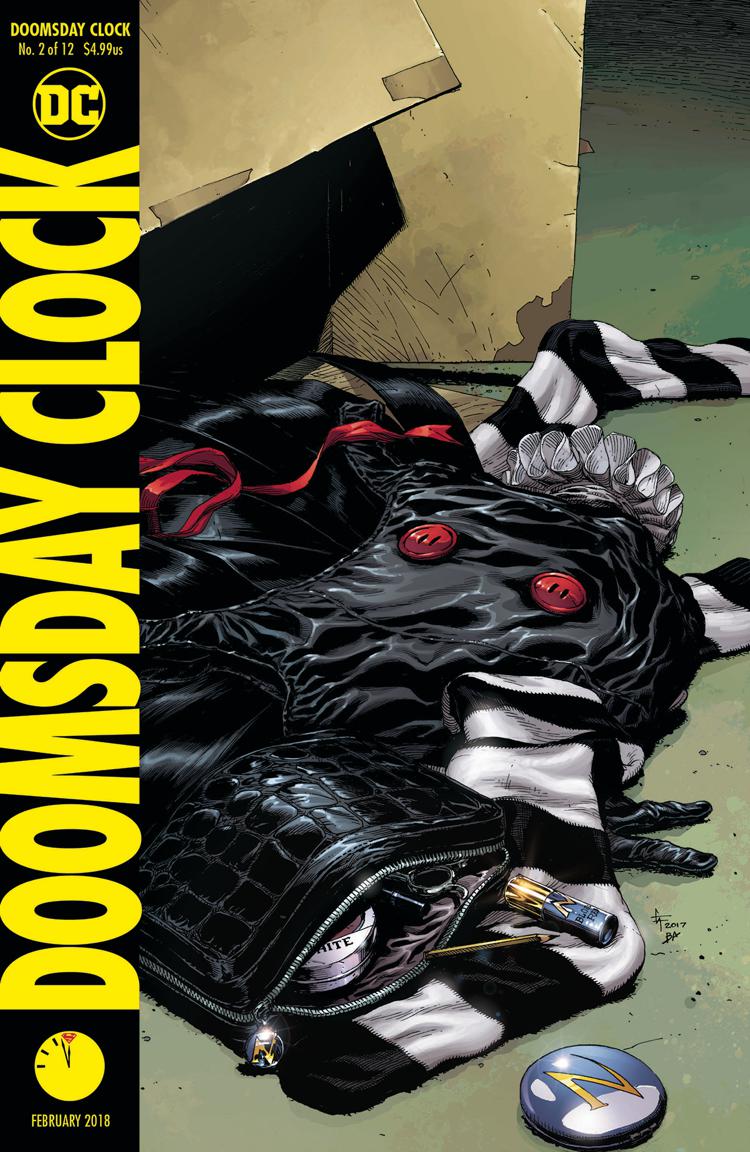 DC and Watchmen characters collide at last! The story that began in DC UNIVERSE: REBIRTH #1 comes to a thrilling and unexpected crescendo in the pages of this titanic twelve-issue series by the all-star team that brought you BATMAN: EARTH ONE and SHAZAM!

In this second chapter: The Dark Knight discovers another relic from the Watchmen world. Lex Luthor pays a devil’s bargain. And killer clowns trek through Gotham seeking a madman.

Why It’s Hot: The Watchmen meet the DC Universe is something I never expected to see, but here we are. After a fairly cautious first issue Geoff Johns and Gary Frank look to pick things up a notch with the second issue. Whether you agree with what DC is doing or not with regards to using Moore and Gibbons’ creations, you can’t deny that Doomsday Clock is the biggest thing happening in superhero comics right now. Warning, if you are all on board with this series you may find yourself with goosebumps as you make your way through this issue. Don’t say that I didn’t warn you!

One of DC’S greatest heroes is missing! No one has seen or heard from Carter Hall-a.k.a. Hawkman-in years. Reincarnated repeatedly since the dawn of humanity, Hawkman has spent his many lives uncovering history’s most fantastic mysteries, and now he has become one himself! Take a journey into the one of the darkest corners of the DC Universe as a mysterious man tries to piece together what happened to Hawkman, and how it all connects to the events of DARK NIGHTS: METAL!

Why It’s Hot: Jeff Lemire making his return to DC Comics to tell the tale of what happened to Hawkman leading up to the events of Dark Nights: Metal. That alone would be an instant entry on the Hot Five, but adding in a pair of great artists like Bryan Hitch and Kevin Nowlan makes this an absolute must read for fans everywhere. Metal has been a wild and crazy event so far, and I have a feeling this will live up to what has happened before. Did I mention that Hawkman is back and being written by Jeff Lemire? This may very well be the beginning of a fresh new era for Hawkman, and you don’t want to miss out. 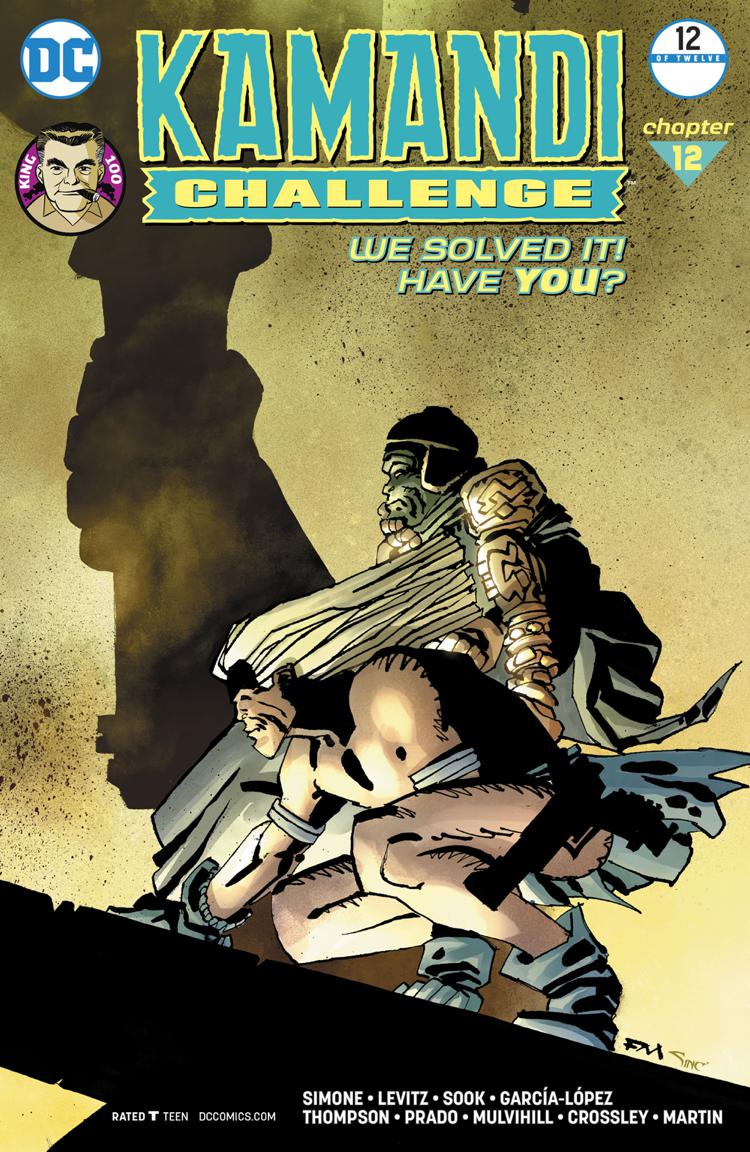 After the out-of-this-world end of last issue, fan-favorites Gail Simone and Ryan Sook bring us our hero’s next adventure in the world of the great disaster. With the fate of his parents revealed and one final threat to overcome, can Kamandi figure out a way for animals and humans to peacefully co-exist before their battles for ultimate power result in the destruction of the entire planet? Find out in the stunning conclusion of our tale! Plus, a bonus epilogue from comics legends Len Wein and Jose Luis Garcia-Lopez.

Why It’s Hot: The Kamandi Challenge is coming to an end, but I hope this will be only the first of many modern “Challenges” at DC. The concept was brilliant, and the creators even more so. We’ve seen some of the best in the business come together and challenge (hence the name) one another to create a ode to Jack Kirby. Of all the projects to celebrate Kirby’s life this year this might be the most true to the spirit of The King. Not only do we get the great creative team of Gail Simone and Ryan Sook wrapping up the story, but we get an epilogue from two legends in the recently departed Len Wein, and the master known as Jose Luis Garcia-Lopez. 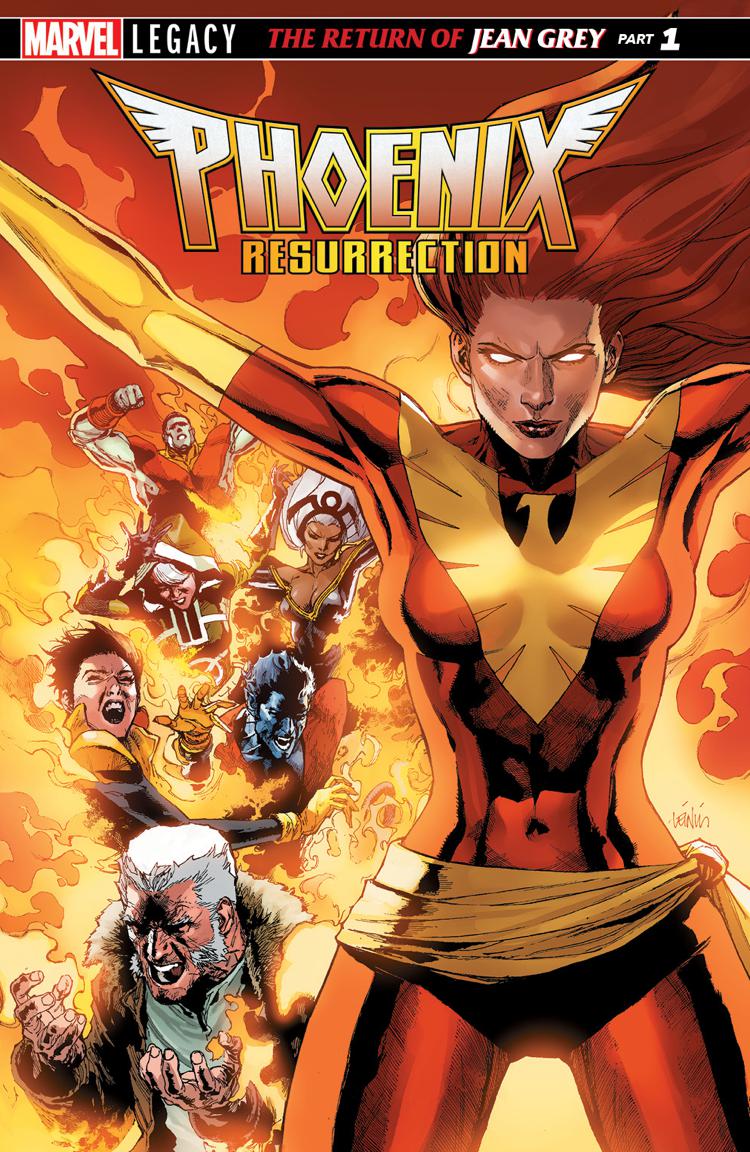 She will return, like a Phoenix from the ashes.
Years ago, Jean Grey died and the X-Men mourned her. Since then, the world has changed, her teammates have lived without her and died without her. And now, when strange events start happening all over the world, those teammates can only come to one conclusion – the one true Jean Grey is back!

Why Its Hot: The original, fully aged Jean Grey is back for the first time in almost fifteen years. The last time we saw Jean alive and well was in Grant Morrison and Phil Jimenez’s New X-Men #150. That was all the way back in December 2003. To put it in perspective, that was nearly six months before Joss Whedon’s first issue of Astonishing X-Men was released. Colossus was still dead, Cyclops wasn’t a revolutionary, Kitty Pryde hadn’t been assumed dead and returned, Nightcrawler was still years away from dying and coming back, and the same goes for Wolverine. It was so long ago that Brian Bendis hadn’t written a single issue of Avengers, and the X-Men were still the most popular team in comics. That’s a long time for a major character to stay dead in comics, and even longer when you consider it’s the X-Men. Marvel has tasked star Matthew Rosenberg to bring back Jean Grey, and he is joined by some of the best artists in comics to make this as big of a story as possible. 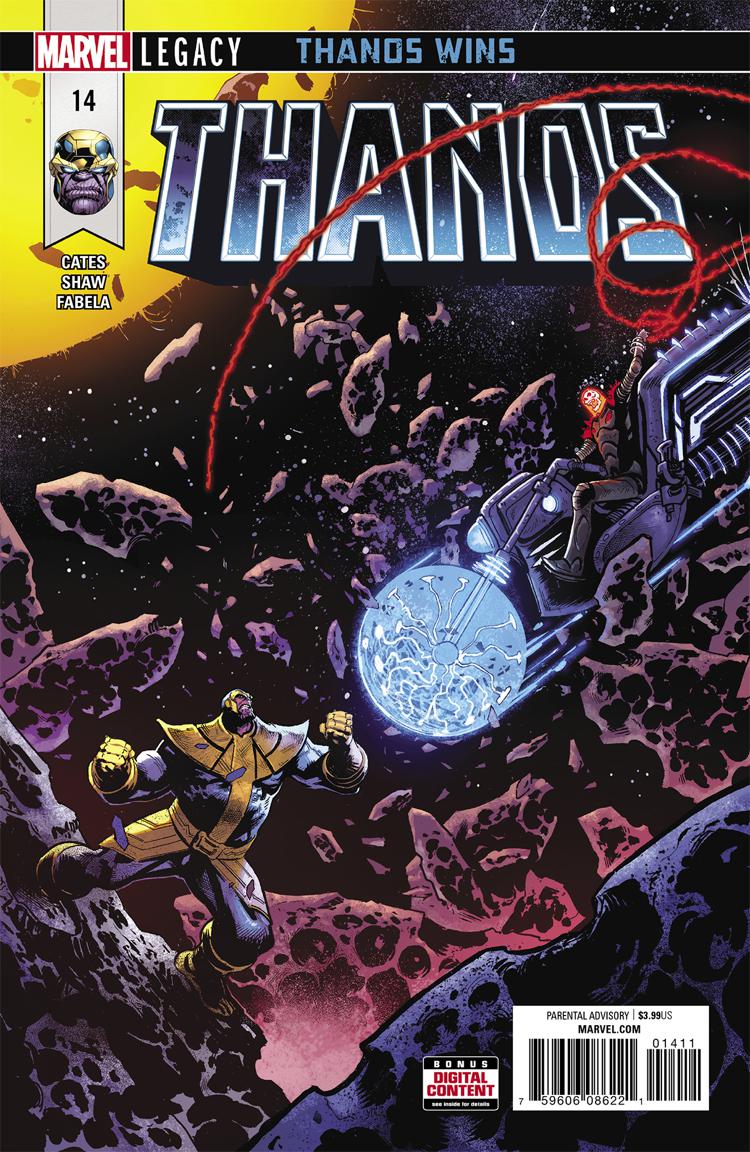 THANOS WINS Part 2
• Thanos has journeyed to the end of time to the moment of his complete victory…and he’s not happy with what he sees!
• Writer Donny Cates and artist Geoff Shaw (God Country) continue the tale of the Mad Titan’s biggest glory and ultimate shame!

Why It’s Hot: Donny Cates and Geoff Shaw took Marvel by storm with their first issue of Thanos. Their debut on the title was one of the best issues to ever feature the Mad Titan’s name on the cover, and one of the best to feature the character period. Issue thirteen can only be described as bonkers (in the best possible way). It featured a Cosmic Ghost Rider, a bad ass Thanos, and even an Infinity Stone. Now it’s time to see what they do for an encore! I have a feeling it’s going to be good, because this creative team is good.

Action Comics #994 – Booster Gold and Superman together on Krypton! Wait? What? Huh? The march to ONE THOUSAND keeps on going!

Jessica Jones #15 – The Purple Man is back and more frightening than ever. With Bendis winding down his long career at Marvel there’s no reason to think he won’t go out with a bang. That makes this even more exciting and nerve racking than it already would have been.

Moon Knight #190 – Max Bemis and Jacen Burrows have more than lived up to the creative excellence that the Moon Knight character has seen in recent years.

Scarlett’s Strike Force #1 – The book may have been controversially cancelled already, but that doesn’t mean you should miss out on the end of Aubrey Sitterson’s G.I. Joe run.

Star Wars: The Storms Of Crait #1 – Star Wars: The Last Jedi is one of the biggest movies of all time, and the planet Crait plays a big role in the movie. There will be no spoilers here, but the comic features the story hinted at in the movie. If you enjoyed the movie this will serve as a must read one shot!