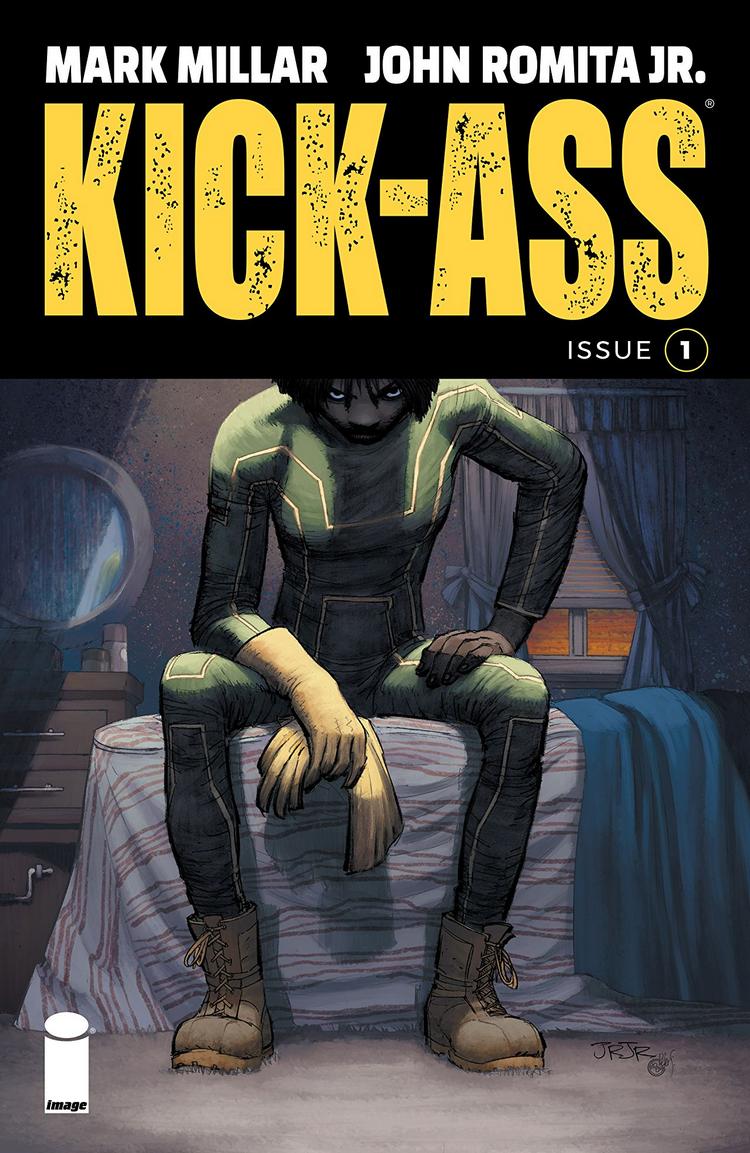 This week sees the Olympics continue to go strong, Valentines Day, the beginning of Spring Training, Black Panther’s long awaited release, and a strong crop of comics hitting the proverbial stands. Enjoy this week folks and see you on the other side! 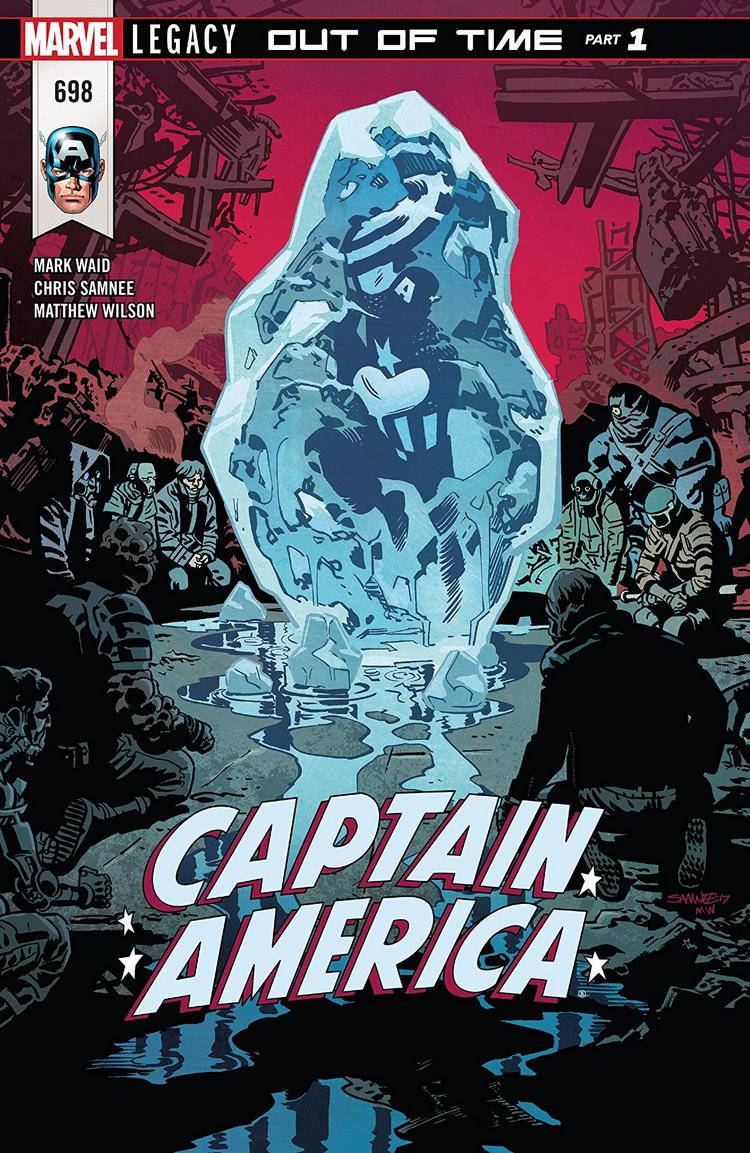 OUT OF TIME Part 1
THE STORYLINE LEADING TO THE MASSIVE ISSUE #700 KICKS OFF!
Steve Rogers awakens to find himself in a strange new future – and it’s his worst nightmare! Can he assemble a new band of Howling Commandos to help him battle for freedom?

Why It’s Hot: One of the best creative teams in comics today has been working the Captain America nostalgia in their first arc on this series. It was a fun, and pretty excercise that saw Steve Rogers getting back to what he does best, but it felt a bit light at times. Now we get to see this creative team unleashed, as Steve finds himself a man out of time and once again fighting for a future he doesn’t recognize. This story looks to be big enough to get the nod for the big 700th issue, and with this creative team’s track record I doubt it will disappoint. 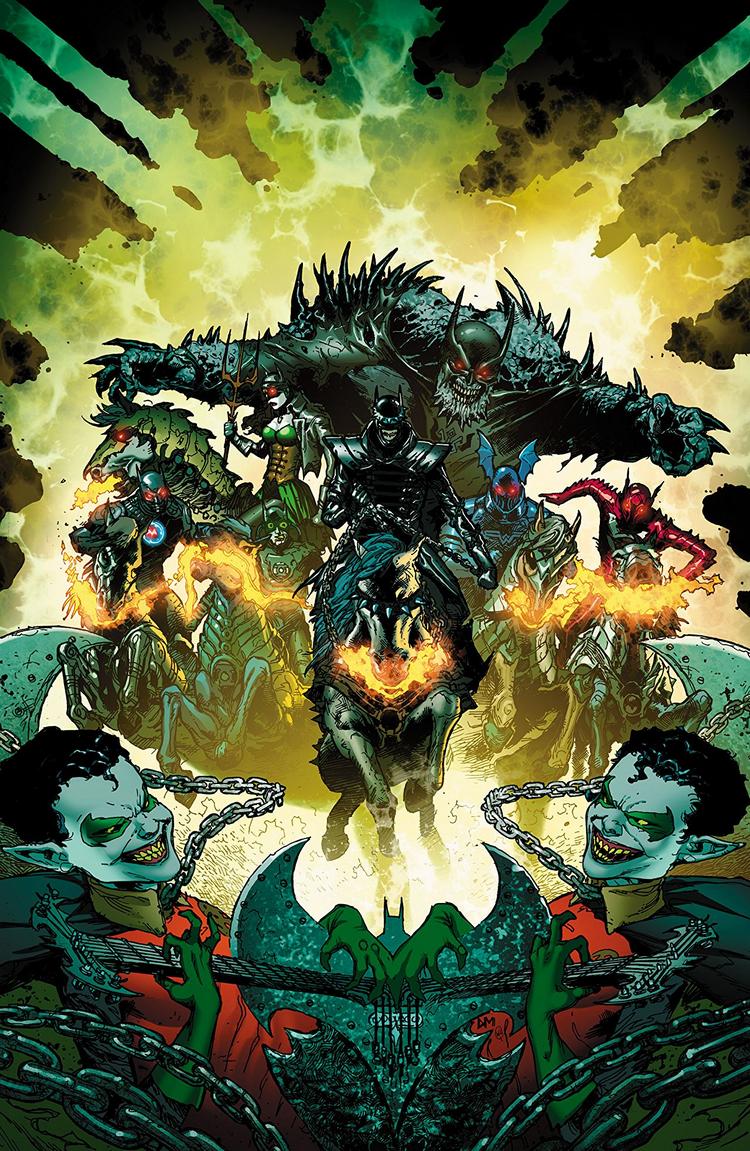 Continued from the pages of the bestselling DARK NIGHTS: METAL! The Dark Knights ride through the farthest reaches of the Multiverse to track down the unlikeliest of teams: The Flash, Cyborg, Raven and Detective Chimp. The mission: keep these heroes from completing their desperate quest to save all of existence! Plus, Challengers’ Mountain crackles with dark energy that will release an army of the world’s worst nightmares into the streets of Gotham City!
This one-shot also answers the question: Where are the Metal Men? And who is the latest addition to the team?

Why It’s Hot: Grant Morrison’s name on the cover of a DC comic for the first time in quite awhile would be enough to be featured in this column, but there’s more to this issue. There’s also *some* guy named Scott Snyder, and two of the publisher’s most exciting and dependable writers in Tynion and Williamson on board. When you take into account the art team this is one hell of a lineup DC has put together for this one shot, and it shows. This issue is EXTREMELY vital to the larger Dark Nights: Metal story, as that series heads towards its final issue (much like Morrison’s Superman Beyond during Final Crisis). To be frank, the issue is absolutely batshit crazy. It feels like Scott Snyder and Grant Morrison’s comics and ideas about the larger tapestry of the DC Universe had a baby and that baby grew up to be this issue. If that didn’t convince you to pick up this issue then nothing will. 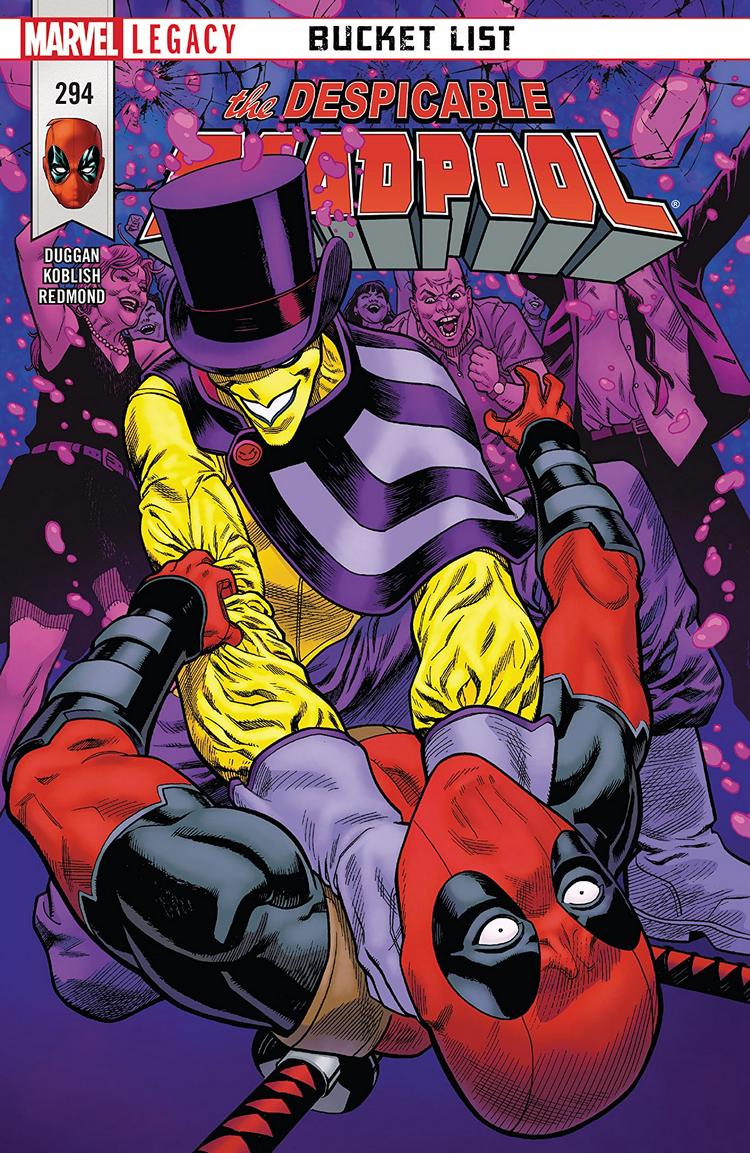 BUCKET LIST Part 3
Wade continues checking off his BUCKET LIST! Deadpool continues to wrap up his remaining business, you know, just in case. This time…Madcap is back to ruin his life! Then – is Deadpool really going to kill Apocalypse? That’s his next target…sort of…

Why It’s Hot: While fans have gotten excited and laughed at the various trailers and social media posts for the upcoming Deadpool 2 movie over the past week I think comic readers have come to under appreciate just how good the Merc With A Mouth’s monthly comic has been. Under the watch of Gerry Duggan and Scott Koblish (and others) Despicable Deadpool is quietly one of the very best comics that Marvel is publishing. In recent months we’ve seen Deadpool kill Cable, come face to face with “Stevil Rogers” in a rare post Secret Empire appearance, and figure out what the hell is going on with him and Rogue. This book is as funny as it has ever been while tying in with the larger Marvel Universe more than ever before. This is good stuff, and as the series gets closer to issue #300 it is one you’ll want to keep an eye on.

KICK-ASS IS BACK-ready to wipe out the city’s criminal lowlives, destroy its gangs, and save its communities from decay. But there’s a new face beneath the old mask, a new figure wearing that famous green and yellow spandex. Who is this new vigilante superhero? Who can fill Dave Lizewski’s shoes? WHO IS THE NEW KICK-ASS? Find out in the first issue of this new, ongoing monthly series. Comic book legends MARK MILLAR and JOHN ROMITA, JR. reunite for the next chapter of the greatest superhero comic of all time.

Why It’s Hot: Kick-Ass is back! Mark Millar and John Romita Jr.’s ultra violent, over the top franchise makes its return after a few years off. Here’s the catch though, it’s a brand new character in the costume, and it takes place in the brand new setting of New Mexico. If you are a fan of the franchise’s original incarnation you will love this comic, because everything might be different, but this comic still feels like a Kick-Ass comic. With buzz surrounding the Millarworld/Netflix deal, and Tessa Thompson’s interest in playing this new take on Millarworld’s most popular character in a potential third movie, this comic will be H.O.T. HOT! 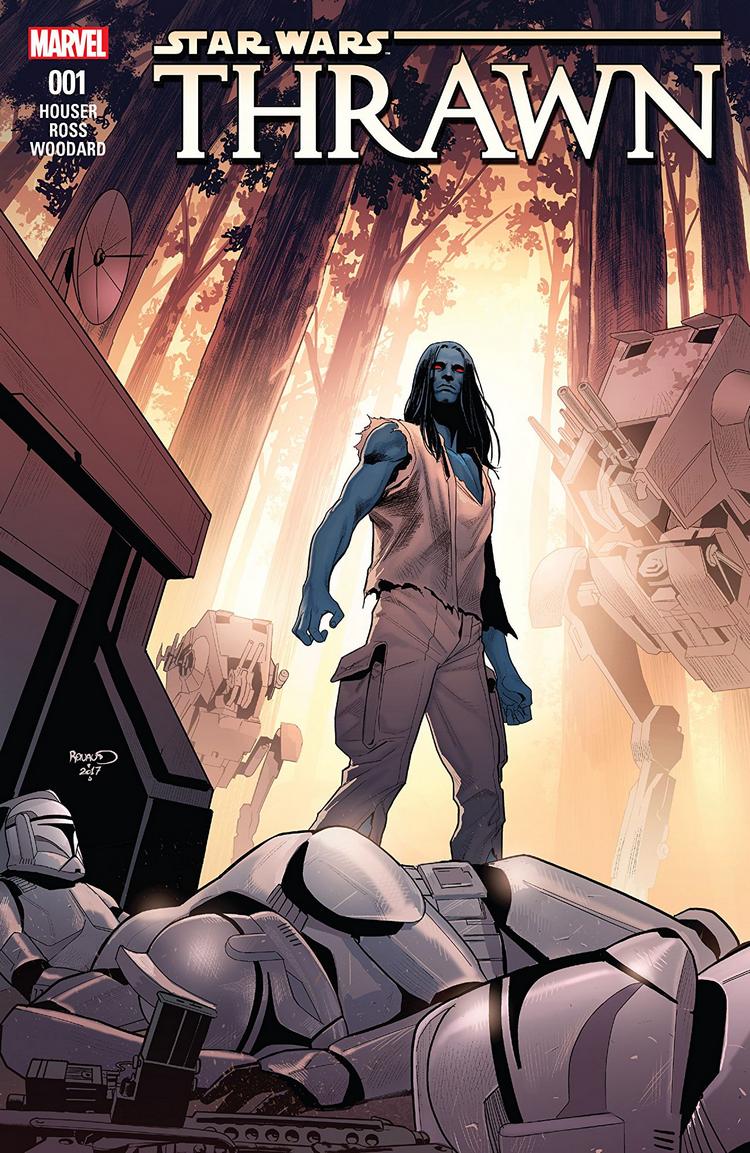 One of the most cunning and ruthless warriors in the history of the Star Wars Universe, Grand Admiral Thrawn is back with a six-issue miniseries about how he became one of the most feared military tacticians in a galaxy far, far away. Written by Jody Houser (ROGUE ONE ADAPTATION) and drawn by Luke Ross (STAR WARS: DARTH MAUL, STAR WARS: THE FORCE AWAKENS ADAPTATION), follow the comic adaptation of Timothy Zahn’s New York Times best-selling novel about Thrawn’s rise in the Imperial ranks!

Why It’s Hot: One of the most beloved Extended Universe Star Wars villains made their debut in the new canon in celebrated author Timothy Zahn’s Thrawn novel, followed by a large role in the animated Star Wars: Rebels. Now the blue skinned military mastermind is making his comic book debut in an adaptation of the aforementioned novel. Writer Jody Houser is no stranger to Star Wars adaptations, as her work on the Rogue One comic showed that she is the right woman for the job here. She is also one of the hottest writers in comics right now with this issue joining Spider-Man: Renew Your Vows, and the Mother Panic/Batman Special on shelves. That’s three of comic’s (and pop culture’s) marquee franchises with her name on the cover on shelves at the same time. Joining her is artist Luke Ross, whose work is just perfect for this project. 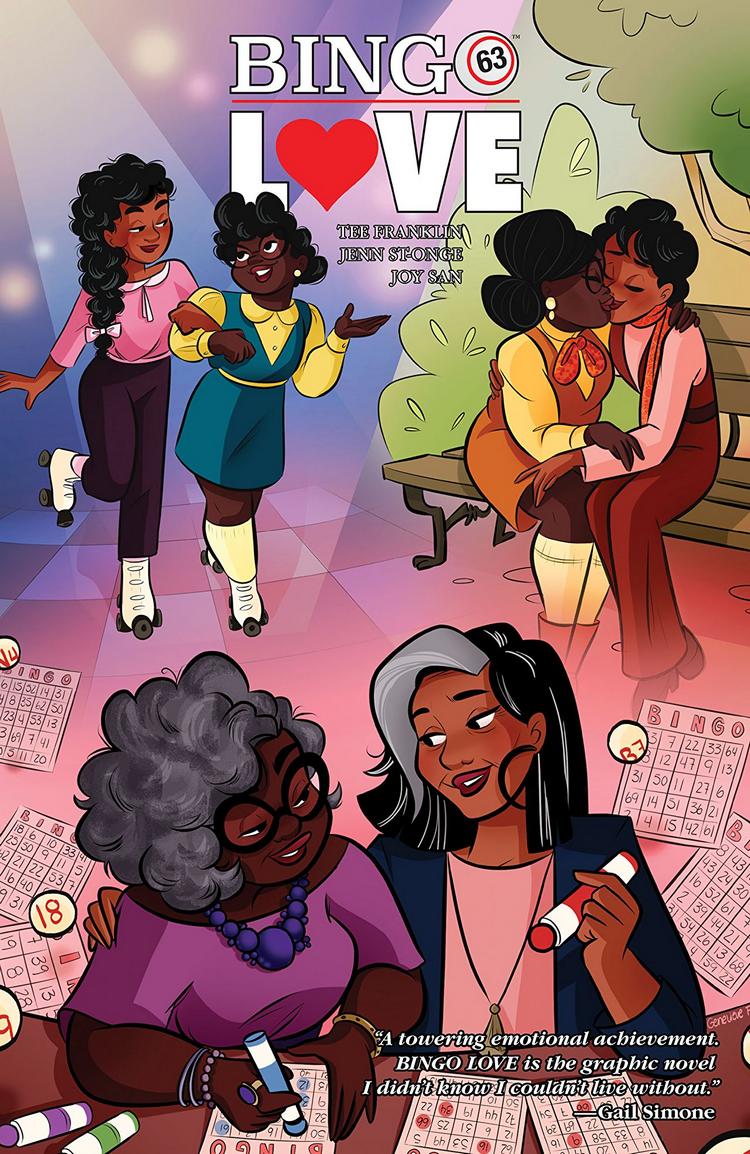 When Hazel Johnson and Mari McCray met at church bingo in 1963, it was love at first sight. Forced apart by their families and society, Hazel and Mari both married young men and had families. Decades later, now in their mid-’60s, Hazel and Mari reunite again at a church bingo hall. Realizing their love for each other is still alive, what these grandmothers do next takes absolute strength and courage.

From TEE FRANKLIN (NAILBITER’s “THE OUTFIT,” Love is Love) and JENN ST-ONGE (Jem & The Misfits), BINGO LOVE is a touching story of love, family, and resiliency that spans over 60 years.
“A towering emotional achievement. BINGO LOVE is the graphic novel I didn’t know I couldn’t live without.” -GAIL SIMONE

Why It’s Hot: Bingo Love got its start last year as a Kickstarter project. The graphic novel blew by its funding goals in a mere five days, and proceeded to blow away critics and pros alike soon thereafter. After the acclaim Franklin, St-Onge, and San received Image made the move to publish the series for a wider audience. In fact, Image has already announced a second (or technically third I guess?) printing to be released next month before the book hits shelves this week. Given that this is an OGN it normally wouldn’t belong here on the Hot Five, but I wanted to make sure this special story got the attention it deserves. Also, at $9.99 there have been single issues in this column that were just as expensive, so I didn’t feel too bad making an exception in this case. If you want to know more about why you should pick the book up this week you can read the Comicosity review HERE