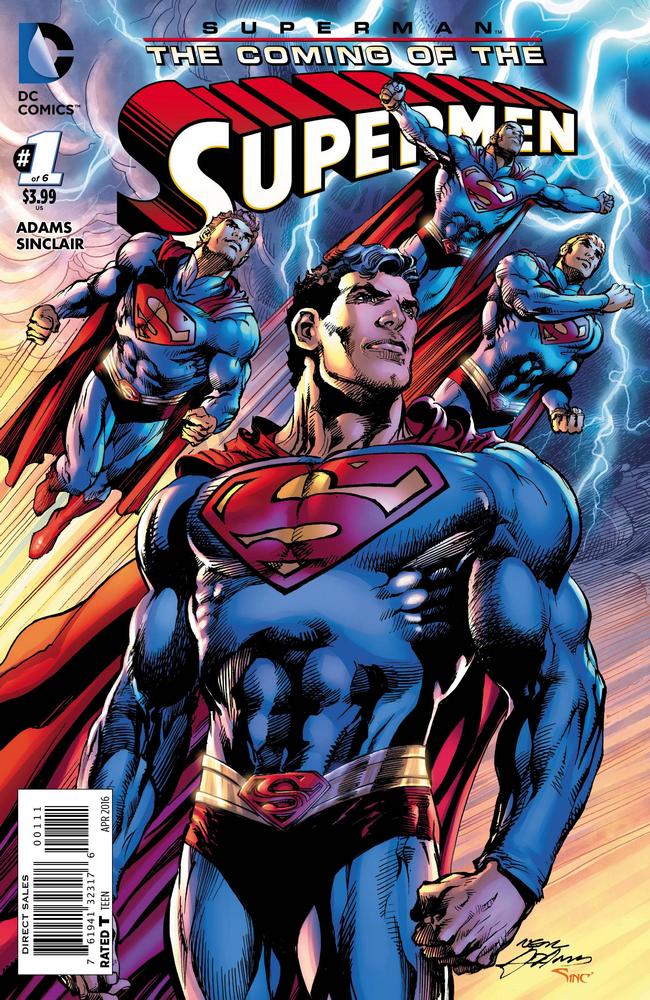 The villain pulling the Avengers’ strings stands revealed – someone who’s been a part of Avengers history for almost all of the team’s existence, in a way you’ve never seen them before! The All-New, All-Different Avengers’ first story arc ends here – and you won’t guess who’s left standing on the last page.

Why It’s Hot: The first arc of Mark Waid’s run on “Earth’s Mightiest Heroes” is coming to a close, and the new team is left to face one of the most dangerous villains in Avengers’ history. Seeing the young characters like Nova, Miles Morales, and Ms. Marvel take on this particular bad guy should make for phenomenal reading. I personally felt that the series started a bit slow, but the past few issues have seen Waid and Asrar firing on all cylinders, and making me excited to see what comes next.

The most talked-about new book of 2016 is just getting started!

Just as she uncovers a conspiracy in the Hollywood Hills that threatens the lives of her fellow psiots and new friends alike, Faith must also deal with the return of her ex-boyfriend and one-time teammate Torque…and a volatile new alien threat that nobody saw coming!

Why It’s Hot: Valiant’s newest superhero title took the comic book world by storm last month. Yes, Faith has a different look than most superheroes, and represents a group of readers who don’t see themselves in comic books too often. All of that is important, but on the periphery though, as the series’ biggest draw is that it is just really good. Houser and company have created a comic that is just flat out fun, and whose title character will put a smile on your face while she saves the world.

On a hidden island in international waters, 16 combatants enter a secret tournament… one that pits Street Fighter vs. G.I. JOE! M. Bison and Destro have joined forces, and taking them down will require the world’s finest warriors: Ryu, Snake Eyes, Guile, Scarlett, Chun-Li and Duke. New challengers Aubrey Sitterson (Hulk, Superman, Tech Jacket, Worth) and Emilio Laiso (Hack/Slash: Son of Samhain) bring the visceral combat of the world’s most popular fighting game series and the real world military action of America’s fighting elite together for the first time!

Why It’s Hot: The World Warriors of Street Fighter vs. The Real American Heroes of G.I. Joe. It’s a childhood fantasy for almost everyone that was young in the late 80s/early 90s. Given IDW’s success with the G.I. Joe property, and the quality of the franchise crossing over with Transformers, I fully expect this new series to be a blast.

From legendary writer/artist Neal Adams comes a threat so epic it will take more than one Man of Steel to handle it in this new 6-issue miniseries!
As Darkseid and the hordes of Apokolips lay waste to the world, even Superman is overwhelmed-but not for long, as three heroes from the miniaturized city of Kandor emerge at full size, armed with all the vast powers of Kal-El, ready to become the new Supermen!

This battle of titans also features the machinations of Lex Luthor, plus fan favorites Jimmy Olsen and Lois Lane aiding in the fight for Truth, Justice and the American Way.

Bailey Hoskins has just discovered he’s a mutant. For someone who’s never been special, never stood out, discovering he’s “gifted” is truly a gift-entry into the halls of Xavier’s School for Gifted Children and into the ranks of the world-famous X-Men! Unfortunately…Bailey might just be the worst X-Man ever. Max Bemis, frontman of the band Say Anything, kicks off his first Marvel miniseries by teaming with stellar artist Michael Walsh (SECRET AVENGERS, HANK JOHNSON) to bring us the story of a misfit among misfits.

Why It’s Hot: The digital first title finally gets a physical release! Max Bemis may be best known for his career as a musician, but he has become quite the prolific comic book writer over the past few years. Worst X-Man Ever is a great example of why Bemis is so good, as he teams with the always solid one of the most fun, and unique X-titles in recent memory.