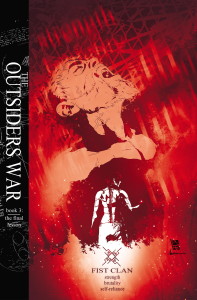 “The Outsiders War” part 3! If you’re still in shock over the end of last issue, just wait until you see happens next! Nothing could have prepared Green Arrow for this!

Why It’s Hot: Jeff Lemire and Andrea Sorrentino have quietly transformed Green Arrow into one of the best superhero books on the shelves today, and The Outsiders War is their biggest story yet. Lemire and Sorrentino are fundamentally changing the Green Arrow mythos and how readers view Oliver Queen, all while telling a beautiful looking action packed story. 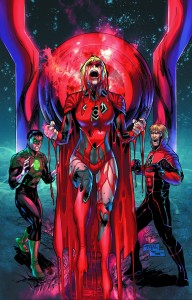 Don’t miss this amazing flip-issue with two covers at a special price of just $2.99! This DOUBLE ISSUE contains both GREEN LANTERN #28 and RED LANTERNS #28! With dozens of sectors in open rebellion against the Green Lantern Corps, Hal Jordan is faced with a crisis in the sector most important to him: 2814, home of Earth…as well as Ysmault, home of the Red Lanterns. Hal made a dangerous bargain with Guy Gardner, and now it’s time to pay up! Plus: Guy and the Red Lanterns take over policing Sector 2814! And you’ll want to keep reading RED LANTERNS next month to see what happens to their newest member: SUPERGIRL!

Why It’s Hot: Two books for the price of one is always a good thing. Two books as hot as Green Lantern and Red Lanterns together in a flipbook for the low price of $2.99 is even better. Readers who are already fans of the books are getting a special treat. For those of you that don’t read these titles there is no better excuse to check out why the Green Lantern books are as good as ever, and hopefully you will be convinced to stick around awhile.

Kid Loki’s all grown up – and the God of Mischief is stronger, smarter, sexier and just plain sneakier than ever before. As Asgardia’s one-man secret service, he’s ready to lie, cheat, steal, bluff and snog his way through the twistiest, turniest and most treacherous missions the All-Mother can throw at him… starting with a heart-stopping heist on Avengers Tower – and the death of Thor! And that’s just the beginning!
Would we lie to you? This is LOKI, true believer – we’re lying to you RIGHT NOW!

Why It’s Hot: Between the stellar work that Kieron Gillen has done with the character in Journey Into Mystery and Young Avengers, along with Tom Hiddleston’s portrayal of the Norse God of Mischief in the Marvel Cinematic Universe, Loki has become one of the most popular characters in the Marvel stable. After the recent events of Young Avengers Kid Loki is no more, and the older version of himself has returned. Not a hero, but not quite a villain, Loki has taken up arms as a secret agent for Asgard in what promises to be a comic of glorious purpose for comic readers everywhere.

The legend has returned!

Marvel Comics presents the all-new MS. MARVEL, the ground breaking heroine that has become an international sensation! Kamala Khan is just an ordinary girl from Jersey City–until she is suddenly empowered with extraordinary gifts. But who truly is the all-new Ms. Marvel? Teenager? Muslim? Inhuman? Find out as she takes the Marvel Universe by storm, and prepare for an epic tale that will be remembered by generations to come. History in the making is NOW!

Why It’s Hot: The topic of diversity has been a hot button issue among comic book readers, and Marvel is delivering with the story of a female Muslim teenager growing up in New Jersey that has already made headlines the world over. While a lot has already been said about Kamala Khan, the new Ms. Marvel, readers will be able to judge the book by its contents. Don’t expect Ms. Marvel to rest on the laurels of being diverse, as the creative team of acclaimed writer G. Willow Wilson and artist Adrian Alphona are the perfect pair to deliver this tale of adolescence and growing up in the “Mighty Marvel Manner.”

For years, The Punisher has waged a war on crime in New York City with an array of very large guns, but a lead on a major source of drugs, weapons, and more has set his many sights due west. NOW! Frank Castle’s in the City of Angels, looking to give the devil his due. Things aren’t all they appear, though, with a highly trained military hit squad hot on Frank’s tail. Caught between a posse of Punisher predators and targets of his own one-man-war, Frank’s manifest destiny may be a shallow grave!

Why It’s Hot: Fresh off the first two issues of the smash hit Black Widow Nathan Edmondson is ready to unleash his vision of Frank Castle on the world, as The Punisher enters All-New Marvel NOW! Joining Edmondson is his co-creator on the creator owned The Activity, Mitch Gerads. Anyone that has read The Activity, with its attention to military tactical detail, can easily see where the duo could do wonders with Frank Castle. The Punisher heads west to Los Angeles, and along with it readers can expect a fresh take on the character along with the expected healthy doses of action. Somewhat overlooked among the deluge of All-New Marvel NOW! launches, make sure you don’t miss out on what just might end up as one of the best books on the stands.