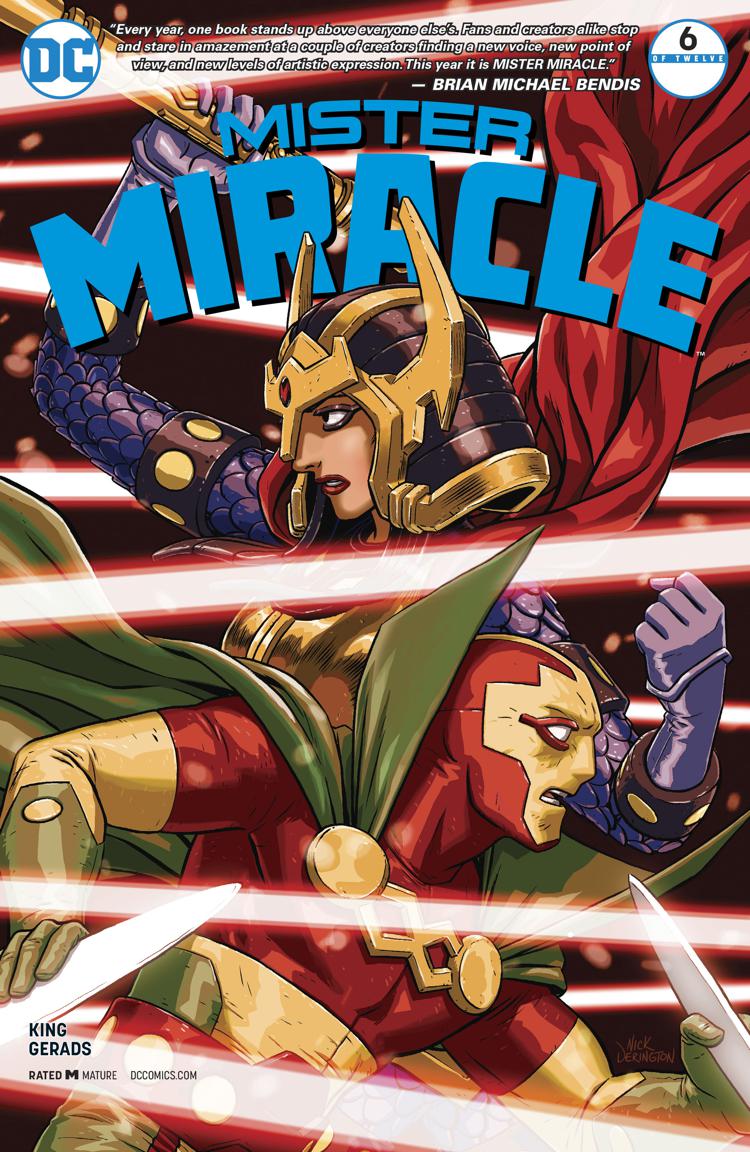 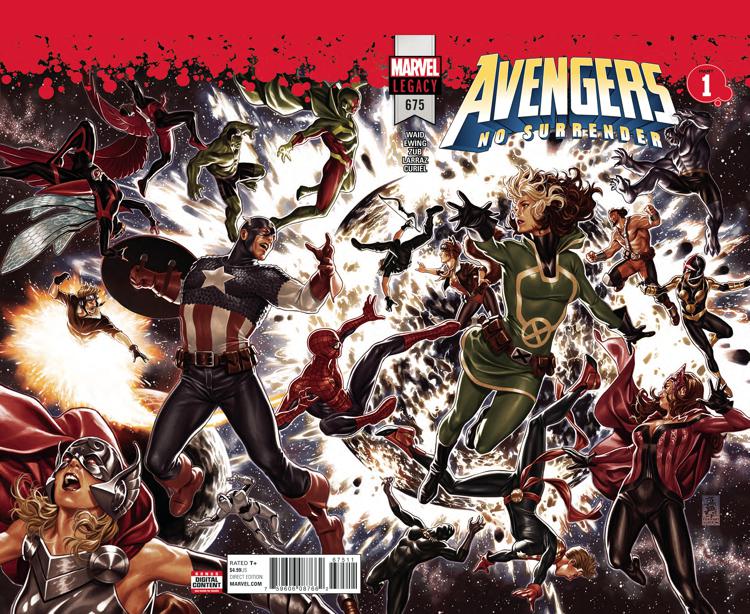 NO SURRENDER Part 1
AVENGERS goes WEEKLY for the stunning sixteen-part saga that will write the end of an era!
The Earth has been STOLEN! The sky burns while mysterious cosmic objects crash down from above, wreaking havoc across the world! The Avengers are the last line of defense between Earth and the mysterious forces threatening to tear it apart. It’s time to ASSEMBLE! The teams you know and love from AVENGERS, UNCANNY AVENGERS, U.S.AVENGERS and OCCUPY AVENGERS come together to face a threat beyond any they’ve faced before in a weekly epic adventure that will define the future of Earth’s Mightiest Heroes!

Why It’s Hot: The biggest Avengers story in recent memory gets underway as Avengers: No Surrender kicks off this week. The sixteen part story sees the Avengers line of comics consolidated down into one weekly title that will bring us to the cusp of the 700th issue. With the loss of Uncanny Avengers, U.S.Avengers, and Occupy Avengers this epic story will feature all of the teams and characters from those books while bringing on board several of their creators. Joining Avengers writer Mark Waid are Jim Zub (Uncanny Avengers), and the amazing, underrated gem that is Al Ewing (U.S.Avengers). Three of the best minds in superhero comics coming together to tell a huge game changing story for Earth’s Mightiest Heroes is something superhero fans everywhere should be excited for. 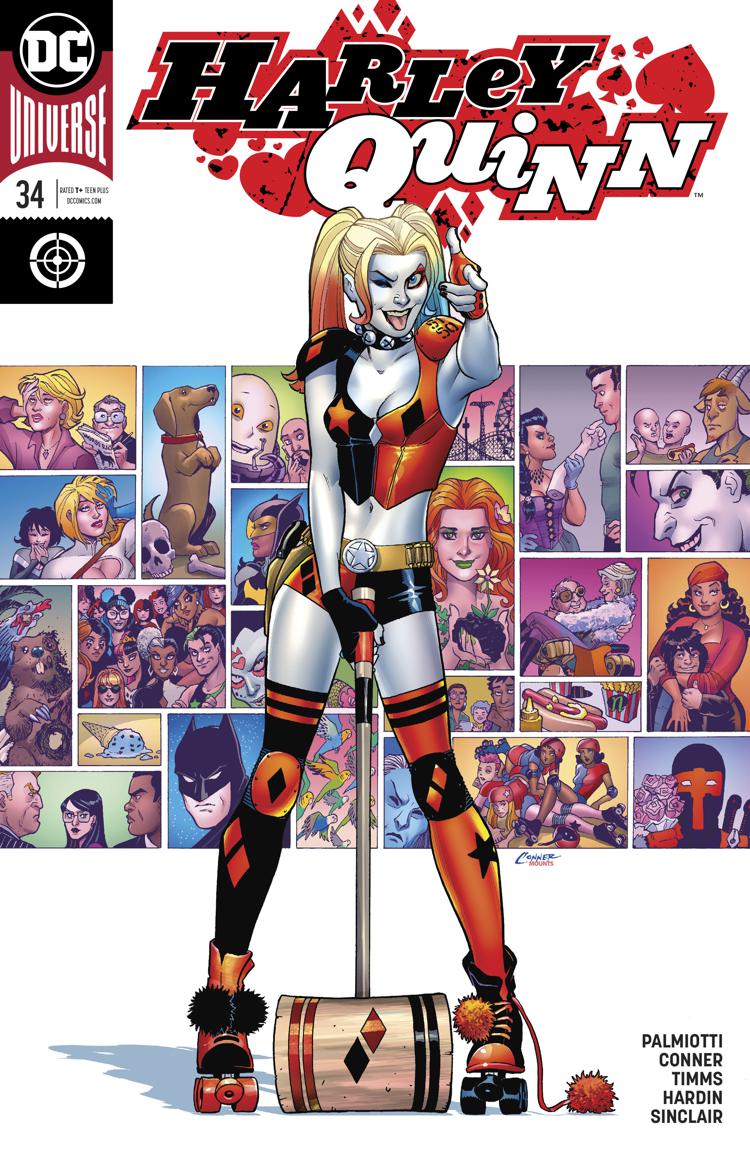 “That’s All, Folks!” After four years and nearly a hundred issues, the era-defining run of Amanda Conner and Jimmy Palmiotti has reached its end! Where will Harley go from here? Who’s coming with her? Is she gonna be…okay? Like, really? Because we’re all a little worried about her…

Why It’s Hot: For four years Jimmy Palmiotti, Amanda Connor, and a number of artists have helped turn Harley Quinn into a mega superstar character who is independent of the Joker. Their contributions to the character cannot be overstated, but it can be celebrated. Celebrate we will, as their monuments us run ends this week!

The hit miniseries reaches the emotional conclusion of its first arc! Scott Free returns to New Genesis to face his punishment, but instead finds the whole world has been flipped upside down. Mister Miracle and Big Barda battle their way through monsters and New Gods to get to the Highfather, but once they reach Orion’s throne room, they learn that the war against Darkseid has taken a bloody tu

Why It’s Hot: My personal pick for the best series of 2017 kicks off its new year by somehow improving on greatness. Tom King and Mitch Gerads bring us the story of Scott and Barda’s trip trip back to New Genesis. Gerads turns in one of the best issues of his career while Tom King’s script is unique, funny, heart wrenching, and surprising. This is the comic everyone will be talking about on Wednesday morning, so don’t miss out. 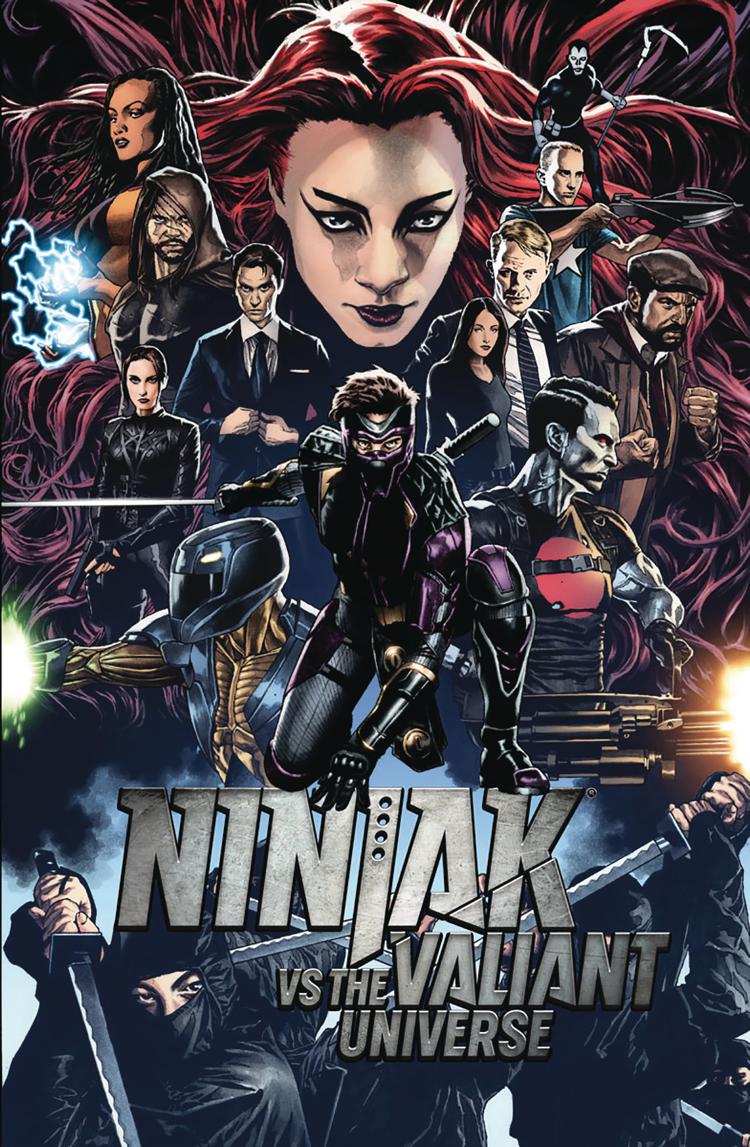 A FIRST-OF-ITS-KIND COMIC BOOK EXPERIENCE! Watch the upcoming live-action digital promotion coming this winter – then jump headlong into the fight-fueled showdown of the century as acclaimed writer Eliot Rahal (The Doorman) and red-hot artist Joe Bennett (Teen Titans,
Deathstroke) as they reveal the full scope and adrenaline-drenched intensity of…
NINJAK VS. THE VALIANT UNIVERSE! Colin King is Ninjak, MI-6’s deadliest intelligence operative and weapons expert. When the ruthless assassin Roku exploits his greatest weakness, Ninjak will be forced to betray his closest allies. Now, on the run, he must face off against the most powerful heroes known to man for a high-octane, take-no-prisoners trial by fire more perilous and more unpredictable than any he’s faced before. In 2018, the world’s most dangerous super-spy goes to war with the Valiant Universe…
Guest-starring X-O Manowar, Bloodshot, Livewire, Archer & Armstrong, Shadowman, and many more, don’t miss the ULTIMATE JUMPING-ON POINT for the most acclaimed and hotly followed publisher anywhere in comics today as Ninjak leads an all-star introduction to the most brutal fighters the Valiant Universe has to offer!

Why It’s Hot: Valiant is arguably the best publisher when it comes to offering awesome stories that also serve as great jump on points for new readers. This week sees the release of another one with Ninjak Vs. The Valiant Universe. Valiant’s resident superspy takes on all the universe’s heavy hitters in this tie-in to the live action short. 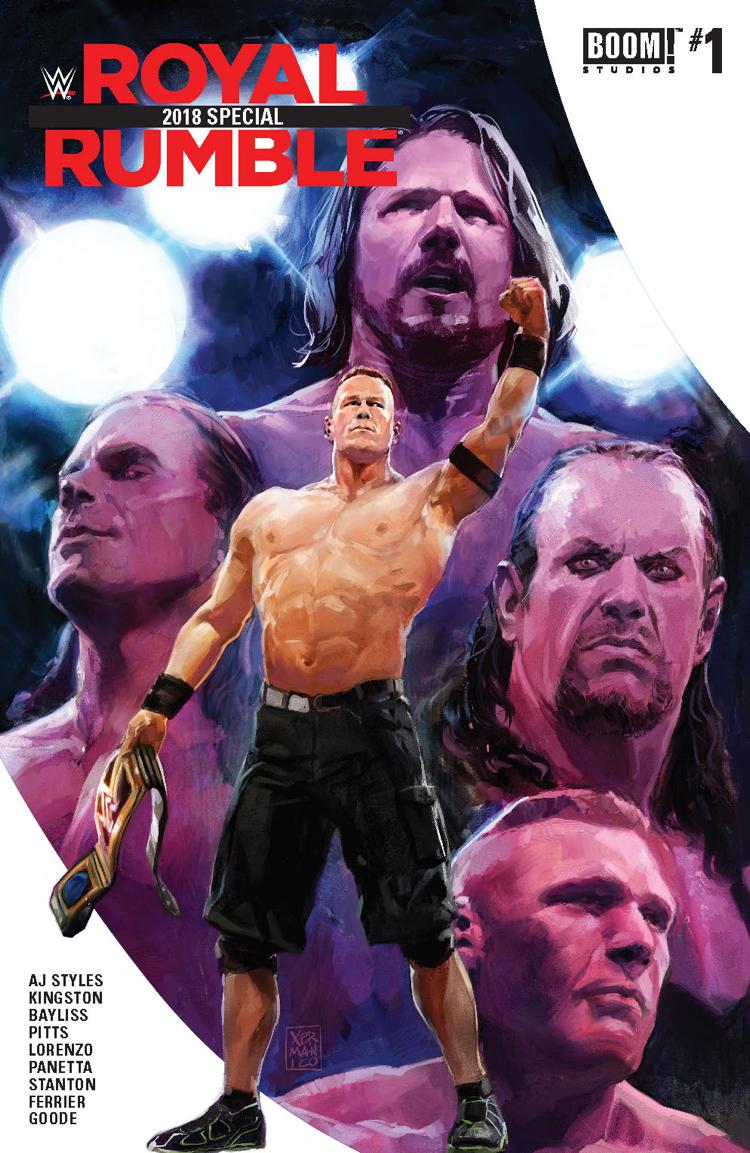 Every January, Royal Rumble takes the world by storm in a battle royale free-for-all in one of the most celebrated annual events. Featuring “The Debut of AJ Styles,” written by WWE Superstar AJ Styles and Michael Kingston (Headlocked)! From Ric Flair winning his first rumble to Shawn Michaels going the distance after teetering on the edge, we’re packing this special with the greatest hits throughout Royal Rumble history. Featuring an all-new story from WWE Superstar “The Phenomenal” AJ Styles!

Why It’s Hot: BOOM! Studio’s ongoing WWE series has been quite entertaining on its own over the past few year, but the specials created for the “Sports Entertainment” company’s four major shows have been the highlight of BOOM!’s time with the property. The 2018 Royal Rumble Special looks to continue that trend with the comic writing debut of current WWE Heavyweight Champion AJ Styles. For those of you that don’t know, the Royal Rumble is arguably the second most anticipated event on the WWE schedule. The event is headlined by its namesake, a 30 man (a woman’s match is making its debut at this year’s installment) over the top rope variation on a battle royale. The Rumble is one of the most unique matches the WWE has to offer, and fans often speculate on surprise debuts and returns by which the match has become known for. Back in 2016, the aforementioned AJ Styles changed the WWE by making his full time debut in the match. Styles, one of the best wrestlers in the world, is making his comic debut by teaming up with Headlocked creator Michael Kingston to tell the story of that night. While Styles’ name will be the real draw, the Royal Rumble has had its fair share of memorable moments over the years, and BOOM! has assembled a phenomenal (see what I did there?) group of creators to bring some of these moments to life. This is a must read for WWE fans everywhere!

Action Comics #995 – Superman and Booster visit the last place Booster ever wanted to go as Action Comics keeps on trucking towards four digits!

Batgirl & The Birds Of Prey #18 – SPYRAL is back! How will Huntress deal with the return of the agency she was so intertwined with?

Phoenix Resurrection: The Return Of Jean Grey #3 – This series has been a X-Men fan’s dream come true so far, and we get to read it weekly!