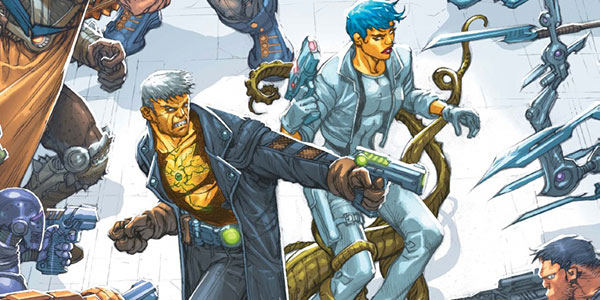 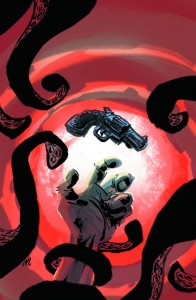 “KILL SWITCH,” Conclusion
The game of death continues in it’s final chapter as Kill Switch, surrounded by an army of blood thirsty assassins and dealing the last issue’s betrayal, vows to hunt down and punish the person responsible no matter how long it takes!

“MEATBAG,” Part Two
Potbelly Sanders is dead, deceased, expired. Now Detective DeSanto is on his own, and falling further and further into darkness. Part Two of “Meatbag” concludes with a twist of bizarre noir by SCOTT MORSE and STEVE NILES in their first CREATOR-OWNED HEROES collaboration.

Why It’s Hot: Sadly, Jimmy Palmiotti’s bold attempt at focusing on the creator-owned spirit of the comic industry ships its final issue this week. Full of smart new concepts and interesting interviews with the people who labor in love to make books each month, Creator Owned Heroes was a unique contribution to the landscape, and it will definitely be missed by members of the Comicosity staff. But “Last Issue” is NO excuse to pass up a book with a brand new Darwyn Cooke tale, not to mention all the other goodies the creators behind the heroes have to share. 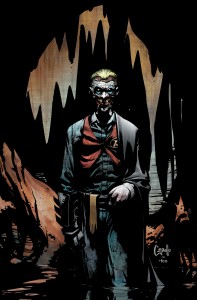 “DEATH OF THE FAMILY” continues! Batman heads into his showdown with The Joker as the madman’s plan is finally revealed – in Arkham Asylum! It all lead’s into next month’s terrifying conclusion! And in the backup story, in the midst of The Joker’s assault on Batman and his allies, get a secret glimpse into what started The Crown Prince of Crime on his horrifying journey!

Why It’s Hot: I struggle to come up with new ways to convince the last four people on Earth not reading Batman just how fantastically incredible it is, month in and month out. The recipient of three 10/10 scores three months in a row from Comicosity reviewer Gavin Craig should be enough for now. 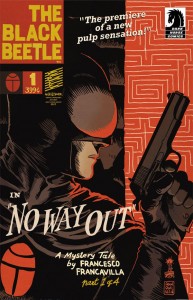 Black Beetle’s investigation of two local mob bosses is interrupted when a mysterious explosion murders them and a pub full of gangsters-taking out most of Colt City’s organized crime in one fell swoop. Who could pull off such a coup, and what danger might that murderous bomber do to Colt City and Black Beetle?

Why It’s Hot: Black Beetle #0 swept last month’s comic industry hot lists, and that was just a reprint of previously published material! #1 is the start of a brand-spanking-new adventure for this mysterious pseudo-pulp hero and it’s the perfect time to check out Francesco Francavilla’s instant classic. If you’ve ever been wistful for those classic comic book days gone by, but want a fresh story to satisfy that urge, this is the book for you. 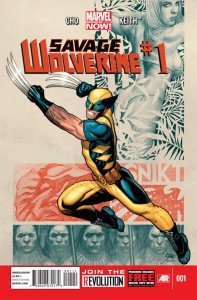 Wolverine awakes to find himself transported to the Savage Land and labeled public enemy number one! With no memory of how he got there, and Shanna the She-Devil his only ally, Logan must unravel the mystery that slumbers at the heart of the Savage Land before it finds a way to kill him first. This January, Wolverine is all brawls, babes, and brachiosaurs, and you’ll never see the end — or the future of the Marvel Universe — NOW!

Why It’s Hot: Frank Cho drawing muscle-bound guys and scantily-clad ladies in the jungle of the Savage Land? Even I know buying this book is a no-brainer. 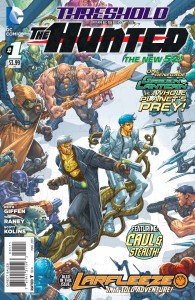 Continues directly out of this month’s GREEN LANTERN: NEW GUARDIANS ANNUAL #1! Jediah Caul, a disgraced Green Lantern stripped of his power ring, is hunted for sport on a televised reality show! With nothing but his training as a GL and whatever weapons he can scavenge, can Caul not only survive these games but win back his self-respect? Plus, in the backup story: What happens when Larfleeze, the ultimate hoarder, is robbed…of everything!

Why It’s Hot: Sure we all love Green Lanterns, and we’ve been treated a focus on some Red Lanterns in the New 52, but there is no Lantern I’ve been begging for more the past 16 months than the Orange Lantern. At last, Larfleeze takes over his own second story in DC’s new ongoing title with a focus on the sci-fi, space-faring elements of the DC Universe, all from the man who reinvented the Marvel cosmos with the Annihilation saga — writer Keith Giffen. With the promise of appearances from the Omega Men, Blue Beetle Jaime Reyes, Space Ranger, Star Hawkins, the original Starfire, and… Captain Carrot?… Threshold seems to be the new go-to space odyssey book we’ve been missing since the relaunch. Where else can you get this kind of cast… well, that is until Larfleeze wants all the pages, not just the back end of the book! Watch out, Space Ranger! (MINE!)