“GODS AND SOLDIERS” PART ONE
• Eisner Award winner James Robinson (STARMAN, EARTH 2) returns to MARVEL, uniting with Steve Pugh (ANIMAL MAN, HOTWIRE, GEN-X) to create a unique, modern day take on the INVADERS.
• The KREE EMPIRE intends to conquer the universe using a weapon that will grant them an army of NORSE GODS.
• It falls to four heroes united by their past—CAPTAIN AMERICA, NAMOR, THE ORIGINAL HUMAN TORCH and the WINTER SOLDIER—who must now face the future and wage war against the Kree to save Earth.

Why It’s Hot: Welcome back to Marvel Mr. Robinson! After years writing primarily for DC, James Robinson has made his way back to “The House of Ideas” where he is immediately filling up his plate with work. If there is one defining characteristic that Robinson is known for it is his work with Golden Age characters. Whether it be working on the characters in the context of the time period they were introduced (The Golden Age), taking these characters, tweaking some aspects around and making them work in the eyes of a new generation (Starman, JSA), or totally reinventing these Golden Age characters while keeping the essence of what made them original (Earth 2), it is clear that Robinson loves working on classic characters. It doesn’t get much older or much more classic than the characters that make up The Invaders. From the looks of it, the book will be set firmly in the present with a foot in the past, and that seems like it may just be the perfect mixture of ingredients for the recipe that cooks up the perfect James Robinson book. Just thinking of Robinson writing Captain America should be enough to get you excited to pick this book up this week! Throw in Bucky, Namor and the original Human Torch, and All-New Invaders should shoot up the read pile come Wednesday.

“The Trial of Jean Grey”
The arrival of the original X-Men in the present sent shockwaves through the Marvel Universe, but we’ve only seen the effects on Earth. When alien races learn that Jean Grey, host of the destructive Phoenix Force, is back on earth, they do something about it. Now it’s up to the rest of the All-New X-Men and the Guardians of the Galaxy to save Jean Grey from twisted intergalactic justice! Don’t miss two of Marvel’s biggest franchises crossing over for the first time!

Why It’s Hot: The biggest franchise in the history of comics meets one of the hottest franchises in comics today when the X-Men crossover with The Guardians of the Galaxy for the first time ever in The Trial of Jean Grey. For over the past year Marvel’s premier writer, Brian Bendis, has been steering the ships of both the X-Men and Guardians of the Galaxy. His All-New X-Men took an idea that many never expected to work and proved the naysayers wrong with a critical and commercial smash hit. His relaunch of Guardians of the Galaxy took a formerly B-list team that had reached cult status, and shot them straight to the top of the charts. With both franchises set to release movies this year, a lot of eyes will be on this crossover, and Bendis leading the charge along with artists Stuart Immomen and Sara Pichell there is no doubt that the story will deliver all of the goods.

GEORGE ROMERO EMPIRE OF THE DEAD: ACT ONE #1 (OF 5)
Written by George Romero
Art by Alex Maleev
Published by Marvel Comics – $3.99

• Welcome to New York City years after the undead plague has erupted—but just because Manhattan has been quarantined, don’t think that everyone inside is safe!
• Not only do flesh-eaters roam within Manhattan, but there’s another ancient predator about to take a bite out of the Big Apple!
• Plus: It’s a terrorizing team-up in variant cover form when the Zombie Godfather unites with the Zombie King – Arthur Suydam!

Why It’s Hot: Without George Romero there would be no The Walking Dead. In fact, without George Romero zombies as we know them today would not exist. The 1968 film, Night of the Living Dead is considered the birth of the Zombie genre, and over the course of the past 45 years Romero has continued to be a staple in the genre. He has turned out a total of 6 films in the Dead series, and inspiring countless others. The next installment of the series, the first since 2009’s Survival of the Dead, is upon us. This time however, the legend George Romero himself has decided to team up with Marvel Comics to tell Empire of the Dead in comic book form. Featuring art from the dark, gritty, stunning Alex Maleev and variant covers from Marvel Zombies cover artist Arthur Suydan, this book is a must read for fans of the Zombie genre.

WHY WE LOVE IT: From the creative mind of Alyssa Milano, with artist Marcus To (Huntress, Red Robin), and writers Jackson Lanzing and Collin Kelly, Hacktivist is a fast-paced cyber-thriller about friendship and freedom in a time war.

WHY YOU WILL LOVE IT: Fantastic characters and stunning action set pieces, beautifully illustrated by Marcus To (Cyborg 009, Red Robin) and Eisner-nominated colorist Ian Herring (Jim Henson’s Tale of Sand).

WHAT IT’S ABOUT: Ed Hiccox and Nate Graft are young, brilliant, and the co-founders of YourLife, a social networking company that has changed the way the world stays connected. In secret, these best friends are also “sve_Urs3lf,” the largest, white-hat hacking group on the planet, exposing information and sparking revolutions across the globe.

Why It’s Hot: Actress, fashion designer, humanitarian, and Los Angeles Dodgers fan extraordinaire Alyssa Milano can now add “Comic Book Creator” to her resume. Inspired by the rise of social media, revolutions in the Middle East, groups such as Anonymous, and Milano’s humanitarian trips around the world, Hacktivist is a globe trotting cyber-thriller featuring big ideas, and timely issues that have started to slowly rise to the forefront of public consciousness in 2013. Helping Milano bring her high concept ideas to life are the writing team of Jackson Lanzing and Collin Kelly with the great Marcus To (Batwing, Red Robin)on art. If a smart, high concept cyber espionage thriller sounds like something you may be interested in then prepare to be charmed by the first issue of Hacktivist. 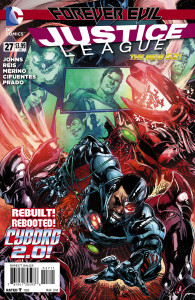 A FOREVER EVIL tie-in! With the Justice League still missing, a barely functional Cyborg will need help if he’s going to take down the Crime Syndicate! To do that, he must find Doctor Will Magnus!

Why It’s Hot: The DC line wide crossover Forever Evil is still going strong as the halfway point has been reached, and new surprises are still being revealed around every corner. The pages of Justice League have been used to flesh out the characters and motivations of those found in the main series, and while this issue will presumably focus on Cyborg, the preview pages have indicated another aspect of the story that makes the issue HOT. Geoff Johns and Ivan Reis, the same team that dominated the charts on Green Lantern, terrified the DC Universe with Blackest Night, and relaunched Aquaman as a commercial and critical smash hit in 2011 are, after several teases, introducing the Doom Patrol to The New 52. The Doom Patrol has a long and varied history with a devoted fan base (Hi Mike!). The team has gone through numerous reinventions by legendary creators and it is exciting to see these characters introduced to a brand new generation by a creative team that is as legendary as Johns & Reis.