Happy SDCC week! What comics should you be reading during one of the biggest week’s in the industry? Look no further than Comicosity’s Hot Five. Hot Five is a short list of the top books we think you’ll want to be checking out. Be they new title launches, key issues or just continuing stories from some of the industry’s most acclaimed books, this list is your guaranteed gold for the week in the comic market!

It’s been one hell of a year in Gotham City, and it all comes down to this: Batman vs. The Riddler! Gotham City and the Dark Knight will never be the same! Don’t miss this special, extra-sized finale of “Zero Year!”

Why It’s Hot: Batman vs The Riddler as the year long epic known as Zero Year comes to a big, bombastic, extra-sized conclusion! Expect The all-star team of Snyder and Capullo to pull out all the stops in what should be another great issue of one of the greatest runs ever to feature The Dark Knight. Also released this week: Batman and Robin #33, featuring the continuation of the Robin Rises storyline

Ragnarök…the Twilight of the Gods in Norse mythology…the destruction of the Nine Worlds.  And now, three hundred years later, the birth of vengeance.

Walter Simonson returns to comics in a BIG way with an all-new series… and doing what he does best!!

My wife and my children are dead. My brothers and sisters are dead.
My parents are dead. The Great Enemies still live.
But I swear on the shattered bones of my kinsmen… they will not live forever.
I shall become… the storm.

Walter Simonson is one of the most acclaimed and respected creators in comics. He has done defining runs onThor, Manhunter, Star Slammers, Elric, Orion and more. Now, in his first creator-owned series in 20 years, he brings his tremendous artistic arsenal to a brand new world… the twilight world of Ragnarök!

Why It’s Hot: One of the all time greats Walter Simonson returns to creator owned comics for the first time in 20 years, for a series with new characters rooted in Norse Mythology. I don’t think there needs to be any further explanation as to why this book is HOT!

Thief. Goddess. Headmistress. Queen. The X-Man called STORM has always defied a single title. And her desire to better the world has never been limited to only her own kind. On a mission to foster goodwill and safeguard the mutant race’s continued existence in her own way, Storm will travel the globe, confronting man and mutant, god and monster and everything inbetween. She will overthrow tyrants, quell tsunamis and strive to see her dream for the world realized. She is STORM, a hero like no other….and the skies will tremble at the sight of their namesake. 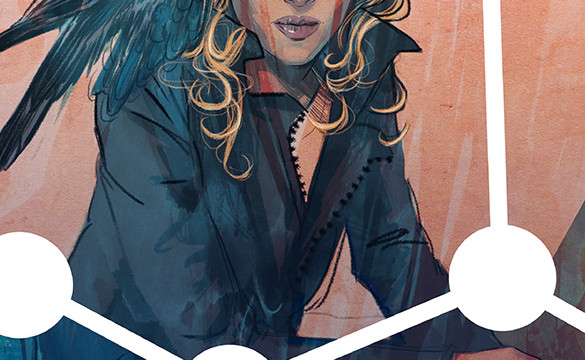 You are not dreaming. We are trying to communicate with you. Local reality has been reinstalled. Things have gone wrong. The revision has corrupted. Finding Ethan Crane is your supreme priority. We are speaking to you from the ultimate bunker within the structure of multiversal time. Do not trust Darius Dax. We are all going to die. SUPREME: BLUE ROSE. Re-introducing the central Image Comics character, with WARREN ELLIS and TULA LOTAY.

Why It’s Hot: Image struck gold with the reboots of Glory and Prophet, and they do it again with Supreme: Blue Rose. From his creation by founder Rob Liefeld, to the CLASSIC late 1990s run by the great Alan Mooore, Supreme has been one of Image’s most important characters. Now one of the best writers of this or any generation, Warren Ellis has a story to tell. A story that will reintroduce Ethan Crane, Darius Drax, and Diana Dane to the modern Image audience while keeping the old fans happy. If you’re looking for a star in the making then look no further than artist Lula Lotay. Her art is absolutely stunning and will blow the minds of readers all over the world.

SPACE WAR I! Earth makes contact with an alien race—and G.I. JOE is on the front lines of first contact! But when the TRANSFORMERS arrive—their version of “peace” does not match our own…

Why It’s Hot: Two of the iconic properties of the 1980s have had an abundance of toys, cartoons, movies, and comic books made featuring their beloved characters. This isn’t even the first time, or second, time that they’ve faced off with each other in comics. With that said, you haven’t seen anything like this new ongoing series from IDW (Unless you’ve read the FCBD zero issue). It’s heavily influenced by old school comics, and legends like Jack Kirby while being innovative and looking to the future at the same time. Whether you’re a fan of the franchises or not, do not sleep on this comic.