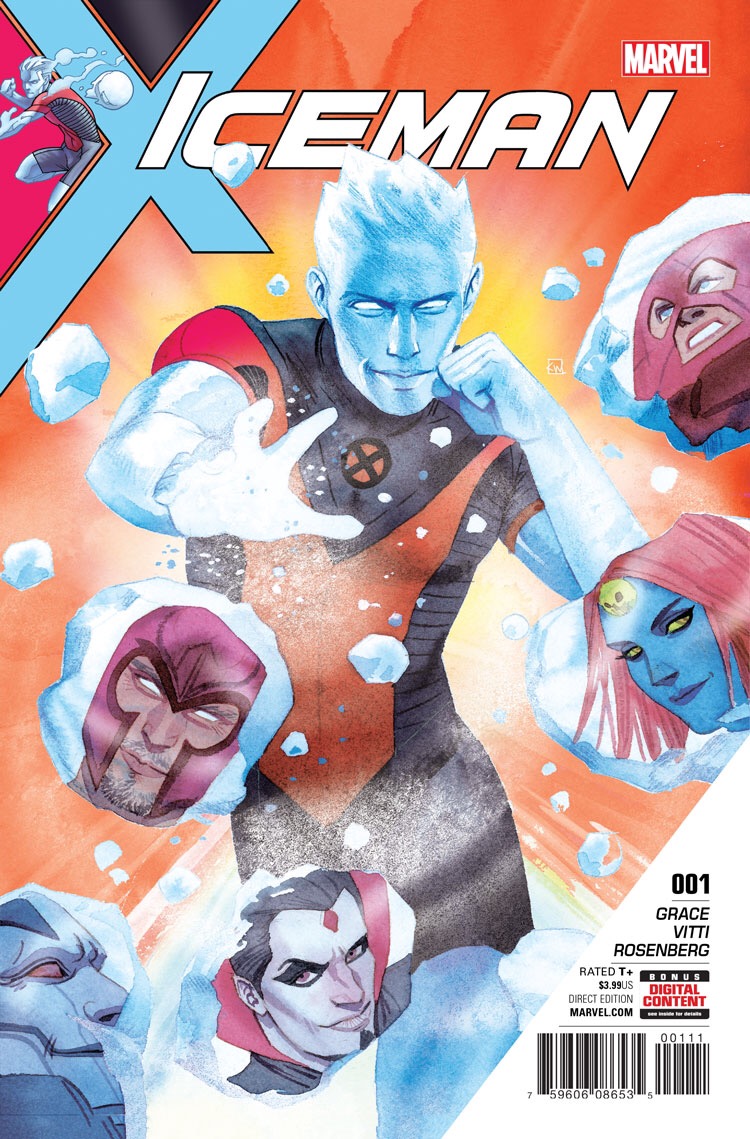 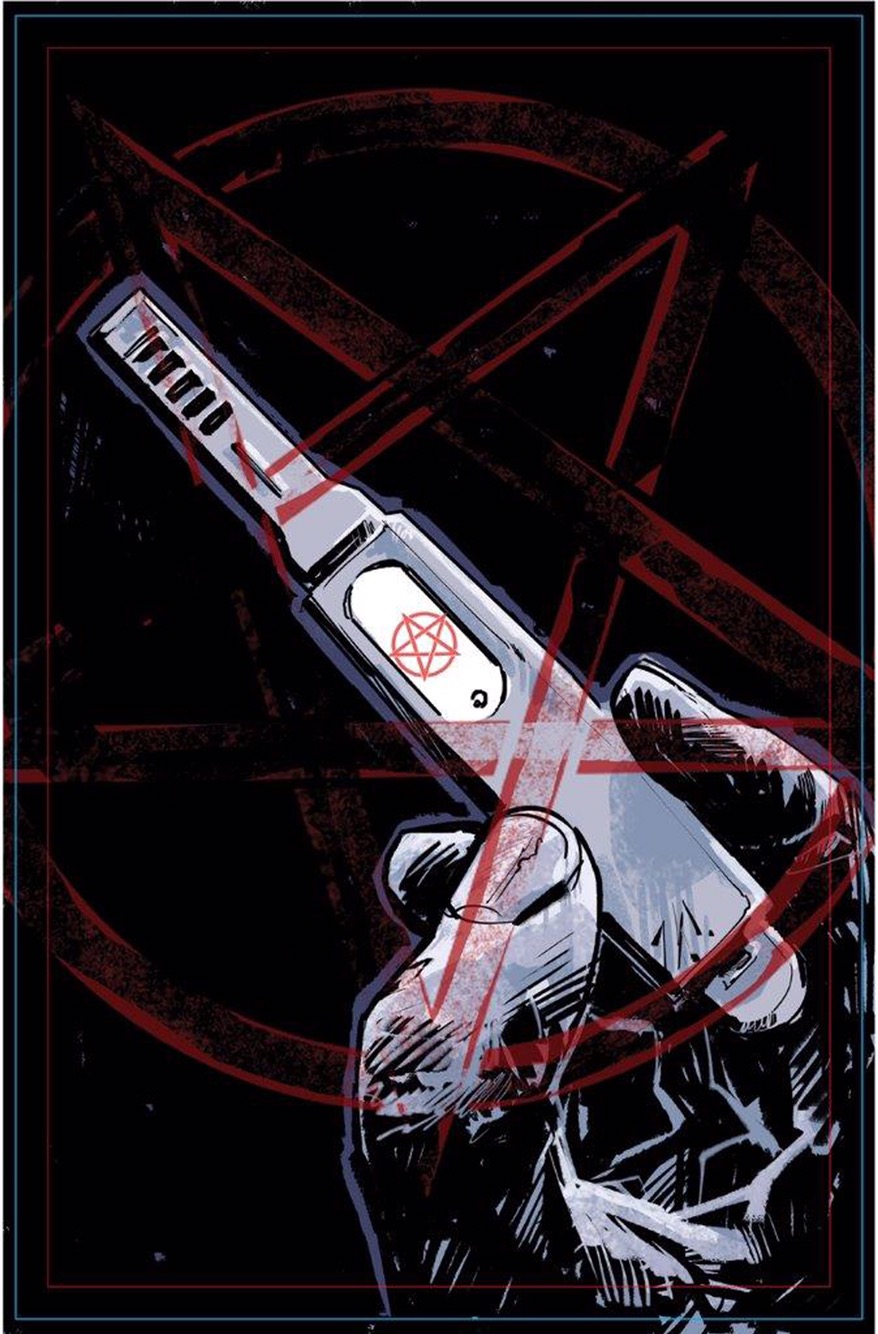 NEW SERIES! Sadie Ritter is sixteen years old, nine months pregnant, and scared out of her sweet nerdy mind. Having a baby that young is tough, but with the support of her loving family behind her, everything should be okay. OH YEAH, and also her baby is the antichrist and it’s going to break open the barriers between the earthly and demonic planes and unleash eternal suffering to all of humankind. Other than that, though…should be fine. From the writer of Buzzkill, Paybacks, Redneck and the break-out hit God Country comes a pulse-pounding new series with art from THE REVISIONIST’s Garry Brown!

Why It’s Hot: At this point I feel that I could just write “New Donny Cates” and that would be enough. The writer has seen his stock rise from up and coming writer to the cusp of superstardom over the past few months, because of comics like Redneck and God Country. Now him and artist Garry Brown bring their talents to Aftershock Comics for quite possibly the book with the craziest concept Cates has ever dreamed up. This should be great! 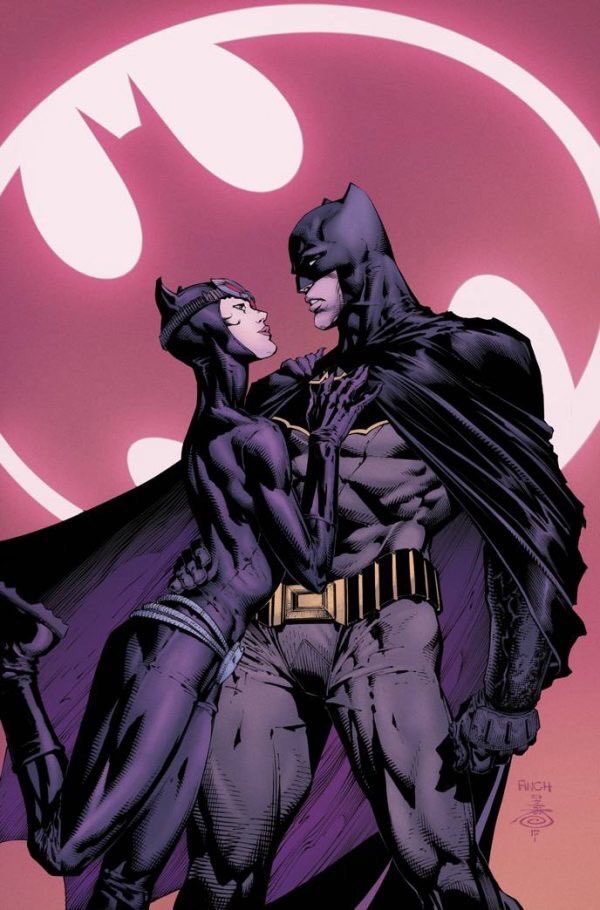 “Aftermath”! Gotham City is at peace…but a war is coming. Armed with the terrifying knowledge gained from the mysterious button, Batman prepares for the coming storm by making a proposition to one of his enemies-one that will change everything for the Dark Knight and his allies!

Why It’s Hot: You may have seen the USA Today story about this issue. If you haven’t, just know that DC felt that the events here were big enough to pull a Marvel, and spoil the issue with a major news outlet the day before release. Whether publishers should do stuff like that will forever be a subject of debate. With that said, they did get one thing right; this issue huge, and will leave fans talking. If that isn’t enough to get you excited for tomorrow then chances are you probably don’t care about Batman in the first place, and that’s okay. For the rest of us though, oh man.

Bobby Drake has been in the super hero game longer than most. But while reflecting on what he’s accomplished over the years, he realizes that the legacy he’s built is a few good one-liners and a string of failed relationships. Not only that, but now a younger version of himself has emerged from the timestream and he’s more put together than Bobby ever was: already a world-class hero in his own right, but also totally comfortable in his own skin, complete with a relationship with a handsome Inhuman to boot. In this new ongoing series penned by Sina Grace (Burn the Orphanage, Self-Obsessed) and drawn by Alessandro Vitti (SECRET WARRIORS), Bobby realizes that the time is never or now, and sets out to build a life and legacy he can be proud of…and be the best ICEMAN he can be!

Why It’s Hot: First off, Happy Pride Month to LGBT Comicosity readers, creators, my friends, and colleagues. Marvel is kicking off the festivities with the highest profile LGBT led series launch of the year. Bobby Drake is an original X-Man who has been around for six decades, and for the first time ever he is getting his own series. Leading the charge is Sina Grace, an openly gay writer whose work at Image made him a perfect fit for balancing Bobby’s superheroics with his experiences as a man just coming to terms with his sexuality. Joining Grace is Alessandro Vitti, whose art work has been impressing readers since his work on the original Secret Warriors, and Avengers Arena. This issue has a LGBT focus featuring a great character, and a great creative team. It’s as if Marvel listened to a sizable portion of their fan base, and delivered. 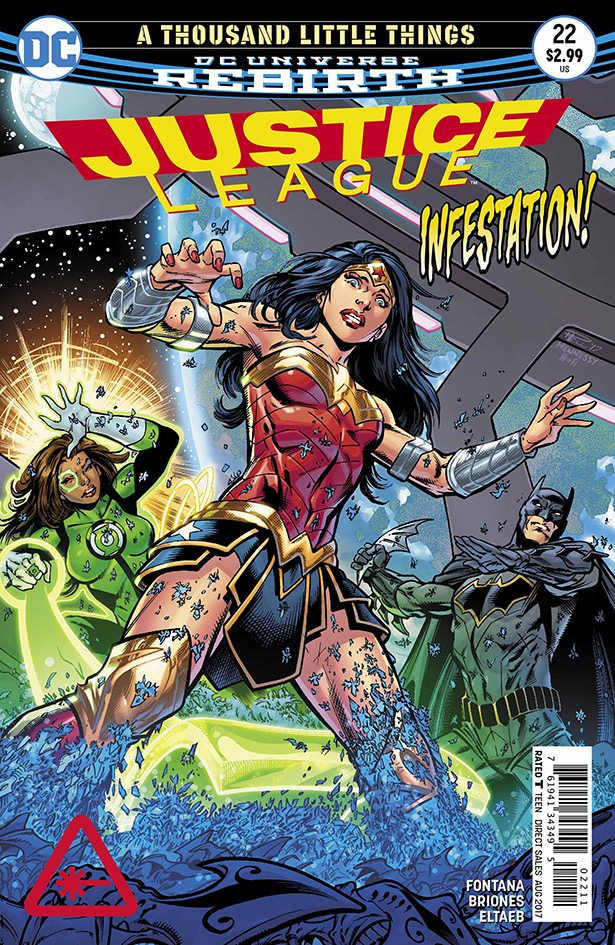 When a dangerous virus accidentally hitchhikes on Green Lanterns Baz and Cruz to the League’s Watchtower satellite, the entire team-minus The Flash and Aquaman-along with some civilians, are quarantined until they figure out how to dispatch their tiny and rapidly multiplying foe. Only one of them has the key…but will they find out in time to save the innocents on board?

Why It’s Hot: In the rare one and done issue, this issue of Justice League looks to accomplish quite a bit in the span of twenty pages. It tells a complete story with a focus on the rookie Green Lanterns, and also features a chance to shine for each of the League members, and a few supporting characters. More importantly this is our first exposure to Shea Fontana’s work in the mainstream DC Universe. Given that she is slated to have the unenviable position of following Rucka on Wonder Woman, seeing how she writes Diana should make this a HOT comic this week. Also, keep an eye out for a scene that is highly reminiscent of one from the number one movie in the world. 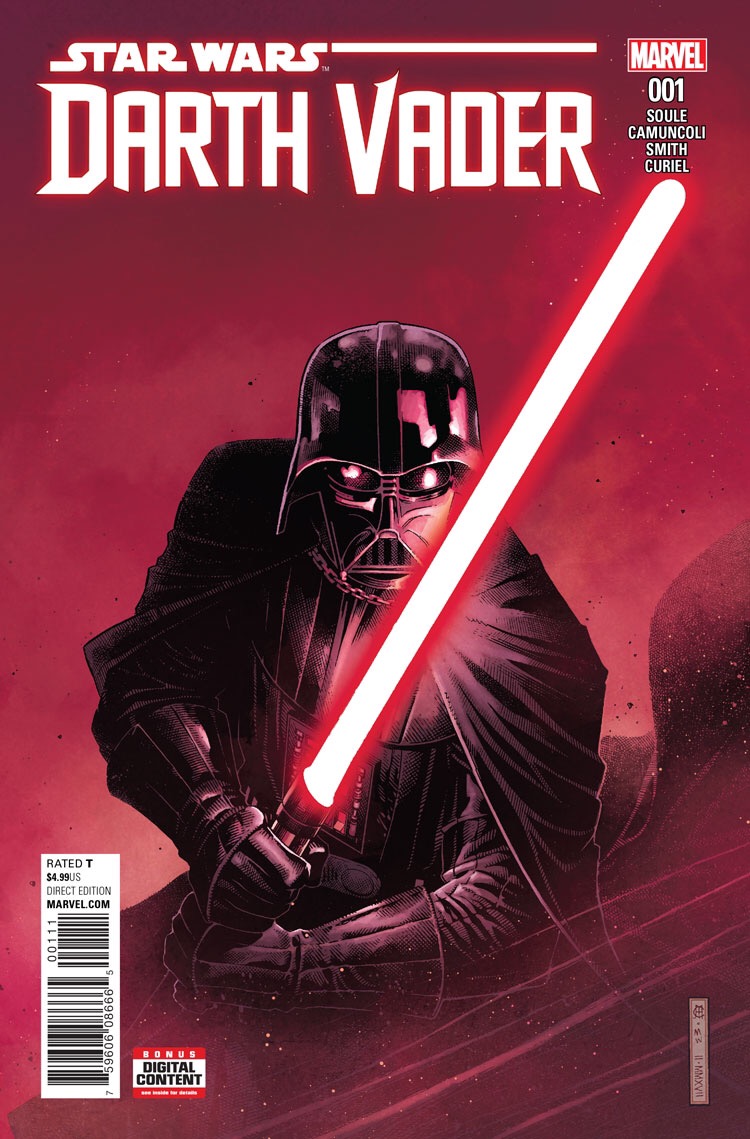 The most fearsome villain of all time returns with an all-new series! When Anakin Skywalker fell, both to the pull of the dark side and to the blade of Obi-Wan Kenobi, he rose back up, more machine than man. Having lost everything that was once dear to him, the former chosen one must take his first steps into a darker world…as Darth Vader, Dark Lord of the Sith! Join Vader as he learns a new way – the way of Darth Sidious and his newly formed Empire…the way of the dark side.

Why It’s Hot: By now it’s widely considered that Marvel’s Star Wars books are good, but Kieron Gillen and Salvador Larocca’s Darth Vader was great. It gave us some great tales about (most) everybody’s favorite Sith, and introduced us to the one and only Doctor Aphra. To say that Soule, Camuncoli, inker Cam Smith, color artist David Curiel, and letterer Joe Caramanga have a lot to live up to is an understatement. Instead of continuing where the last series left off, the creative team decided to set this new series in a time period we haven’t seen Vader in. For the first time ever we get to see the former Anakin Skywalker almost immediately after Revenge Of The Sith. We will learn how Darth Vader really became the character we all know and love to hate. That alone, should get Star Wars fans excited. Add in the extremely impressive creative team, a back up story by Chris Eliopoulos and Jordie Bellaire, and you’re left with a must read comic.

HIDDEN GEM OF THE WEEK 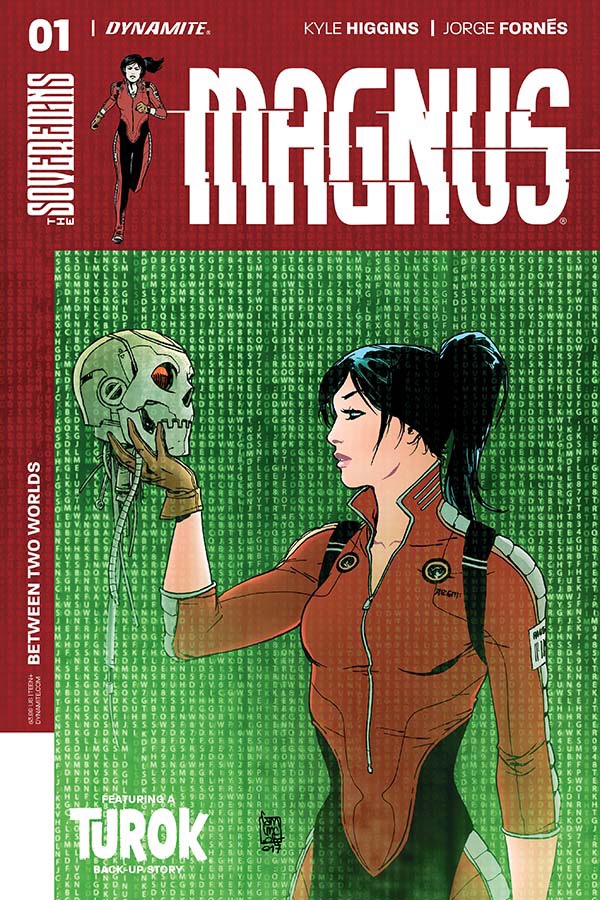 Do humans dream of owning electric sheep? Artificial intelligences, rather than becoming our overlords, have settled into an uneasy symbiosis with humanity – they work for us as our colleagues and servants, earning vacation-time they spend in a boundless digital universe running on human-maintained server farms. But not all AIs are cool with the deal. Enter Magnus – a human psychologist tasked with navigating both worlds in order to bring recalcitrant AIs back into productive society…  BONUS TUROK STORY, CHAPTER THREE! The all-new saga of the all-new Turok continues: He’s a man on a mission, possessed, and he won’t let anyone or anything get in his way!

Why It’s Shiny: A few week’s back we featured the first book to feature Dynamite’s newest take on the Gold Key characters, The Sovereigns, in this very space. That issue set up the individual solo titles that would follow. Magnus is one of these solo titles. You may have read previous comics featuring the Magnus: Robot Fighter character, but this is a fresh, new reader friendly take from Kyle Higgins, Jorge Fornes, colorist Chris O’Halloran, and letterer Taylor Esposito. This new take isn’t some macho robot fighter, but rather female psychologist for an advance race of AI. The comic can be compared to some of the better science fiction on the topic of artificial intelligence, and brings a level of sophistication that is quite the surprise. On top of that the issue also includes the next part of Chuck Wendig and Alvaro Sarreseca’s Turok story. So once again I’m imploring you dear Comicosity readers to not sleep on what Dynamite is doing with these characters when you hit the LCS, or browse through ComiXology this week. Hopefully next time a Gold Key book is featured in this column it won’t have to be as a “Hidden Gem.”