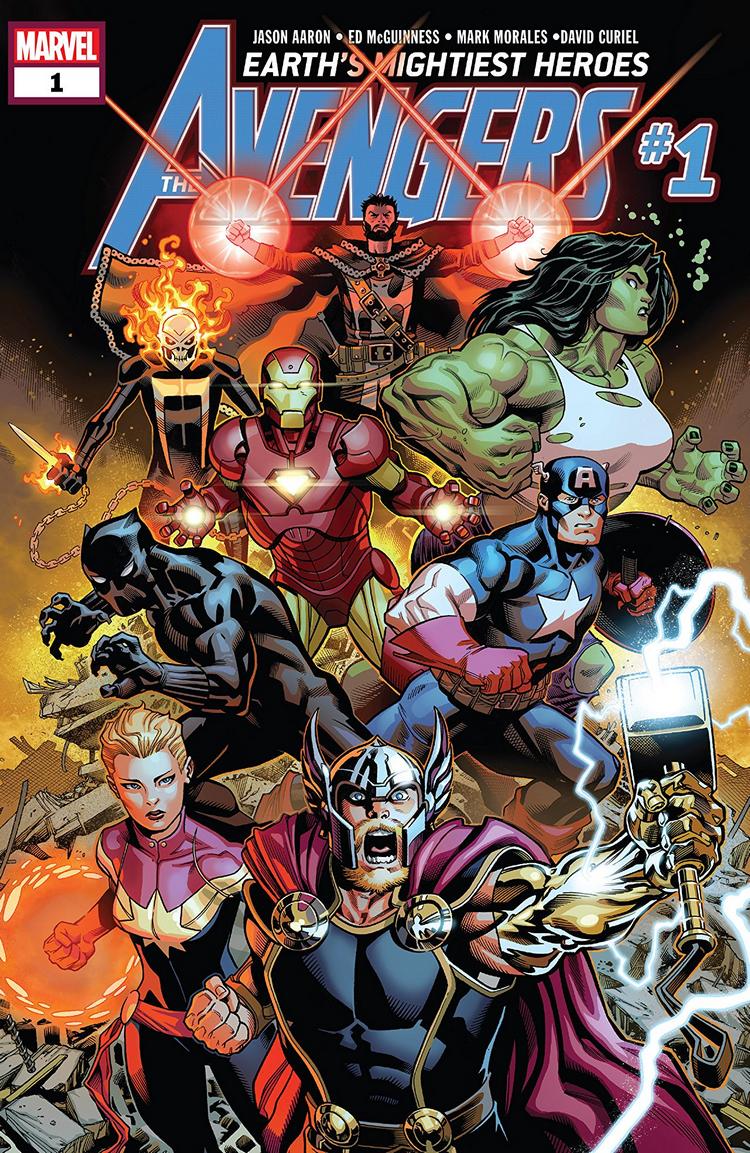 Don’t forget that this weekend is FREE COMIC BOOK DAY! If you are able to make sure to go support your local comic shop this Saturday, and enjoy a number of offerings from a multitude of publishers while you do so. You can also use the holiday as an excuse to pick up every single one of this week’s HOT FIVE.

Thor Odinson. Steve Rogers. Tony Stark. The Big Three of the Avengers are reunited at last! And just in time to save the world from total annihilation at the hands of their most powerful enemies yet: the 2000-foot-tall space gods known as Celestials.

Behold the coming of the Final Host.

Who will answer the call to assemble for a wild new era of Earth’s Mightiest Heroes? Hint: one of them has a flaming skull for a head. And what strange, world-shaking connection exists between the Final Host and Odin’s ancient band of Prehistoric Avengers?

Why It’s Hot: The Avengers are the most popular fictional characters in the world. After their latest big screen outing set the records for biggest domestic and worldwide openings ever the superstar creative team of Jason Aaron and Ed McGuinness have the comic book version of these characters ushering in a new era. Looking for Thor, Captain America, Iron Man, Doctor Strange and/or Black Panther? They are all here and ready to face their biggest threat yet. 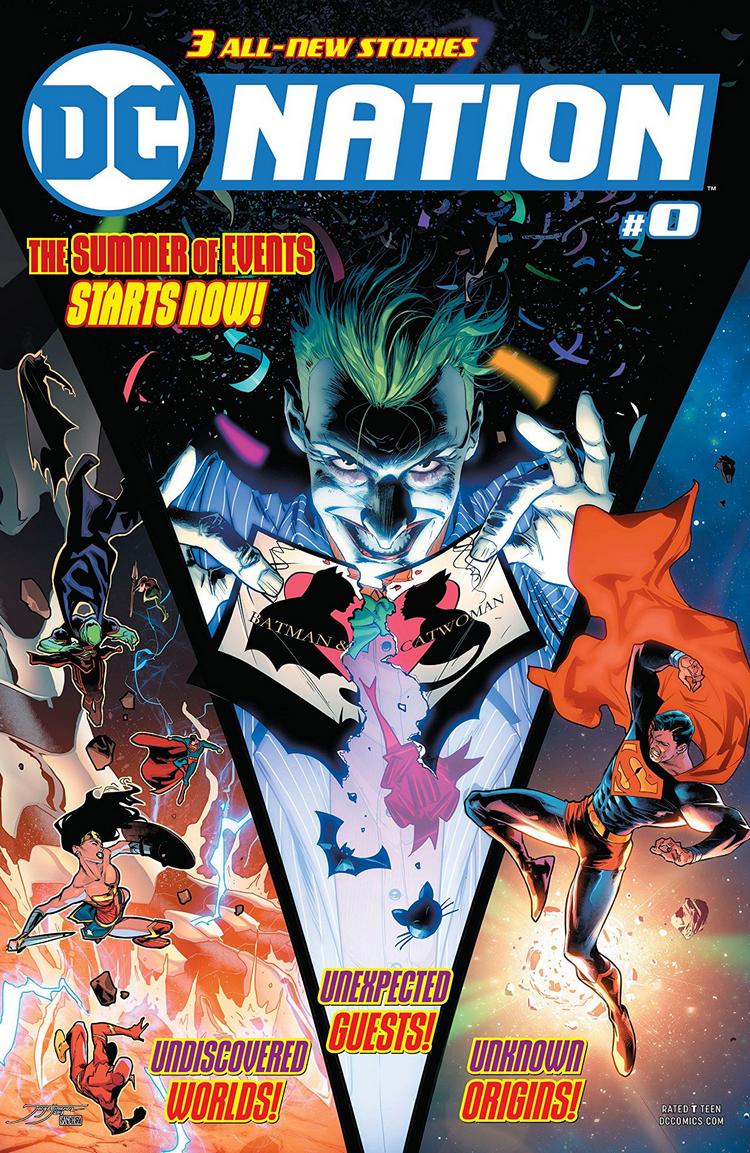 These stories will appear only in this comic book and will not be reprinted in another comic book before each series’ collected editions. Only the first printing of this issue will have a cover price of $0.25. This issue will ship with four covers. Please see the order form for details.

Just in time for Free Comic Book Day, this special comic priced at just $0.25 US features three brand-new stories from a lineup of superstar talent-and each tale serves as a prelude to some of the biggest DC events of 2018!

First, find out how The Joker reacts when he discovers Catwoman has turned her back on crime and plans to marry his archnemesis. Can the Clown Prince of Crime stand to see Batman happy? Writer Tom King and artist Clay Mann set up the events that lead to BATMAN #50!

Then, DARK NIGHTS: METAL shook the DC Universe to its deepest foundations-now it’s time to rejoin legendary writer Scott Snyder, along with all-star artist Jorge Jimenez and co-writers James Tynion IV and Joshua Williamson, for the prelude to JUSTICE LEAGUE: NO JUSTICE! Discover what universe-shattering mysteries have emerged from the most wondrous and chaotic corners of the cosmos to hunt the Justice League in DC’s summer blockbuster event!

And get your first glimpse at Superman’s new world in this exclusive preview of the upcoming six-issue miniseries MAN OF STEEL, written by Brian Michael Bendis with art by José Luis García-López. With Truth, Justice and the American Way all under attack, both Superman and Clark Kent find there’s never been a more important time to stand up for what they believe in.

Why It’s Hot: Just in time for this weekend’s Free Comic Book Day DC has taken three stories from a a superstar laden group of creators that help set up three of the Summer’s biggest comics and wrapped them up in one irresistible package. With these stories, and these creators the publisher could have got away with selling this comic for $4.99, but instead are looking to get as many fans interested in these stories by selling it for a quarter. That’s right, a new comic with never before seen stories written by three of the biggest names in comics, illustrated by a group of DC’s best artists (including the legendary Jose Luis Garcia-Lopez), and starring the most popular characters DC has to offer will be in stores this week for a single quarter. If you’re buying comics at any point this week there’s no excuse to walk out of your LCS without this comic. Even if you’re a “Marvel Zombie” or only read indie titles there’s little harm in spending a quarter to see a glimpse of what DC has up their sleeves this Summer. It doesn’t get much better than Tom King’s Joker, Brian Bendis’ Superman and Scott Snyder’s Justice League all in one comic for a single quarter. 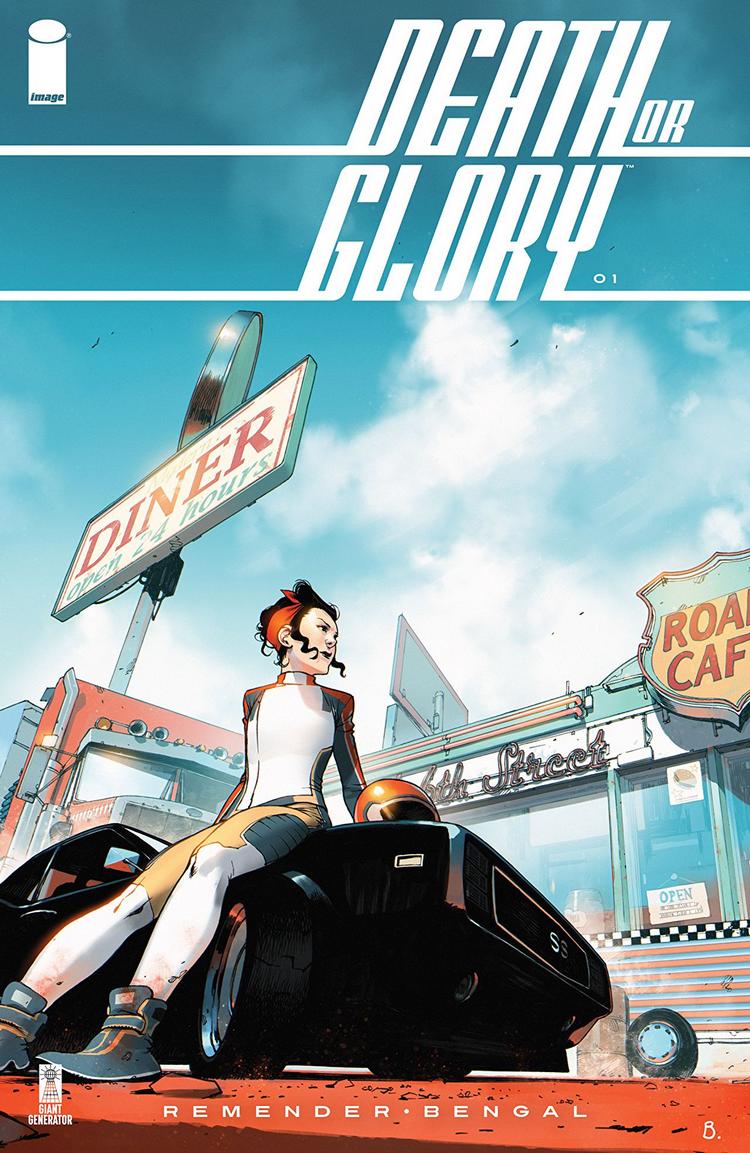 Meet Glory, raised off the grid in a convoy amid truckers-the last men and women fighting for true freedom on the American open road. Now, in order to pay for her beloved dying Father’s surgery, Glory has three days to pull off four dangerous cross-country heists with mob killers, crooked cops, and a psycho ex-husband all out to bring her in or die trying.

The new ongoing series by New York Times bestselling author RICK REMENDER and legendary French superstar BENGAL brings you a high-speed chase across the American West that examines our dwindling freedoms and the price paid by those who fight for an untethered life, in this special double-sized first issue with 40 pages of story!

Why It’s Hot: A new Rick Remender series is always an excuse to celebrate, and that tradition holds true here with the debut of Death Or Glory. Remender has become one of the most consistent and reliable writers in all of comics, as every series he’s released over the past several years has been worth reading. One of the reasons the scribe has been so successful has been the artists he’s partnered with along the way. This time around Remender is joined by fan favorite artist Bengal. The artist has already proven they can turn out amazing work, but this creator owned series might be the one to launch them into superstardom. If you’re looking for another stunning, eye popping, high octane thrill ride to add to your pull list the search just ended with Death Or Glory. 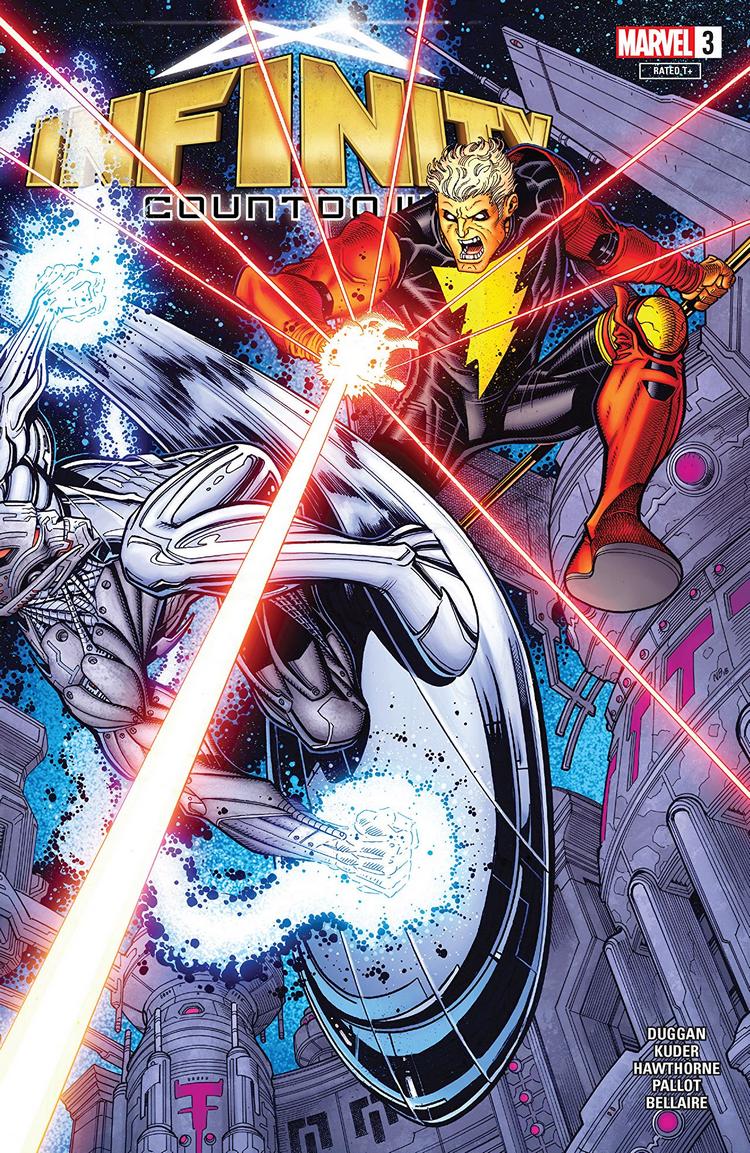 As the Guardians’ last mission together draws to a close, the war for the Infinity Stones has only just begun! Adam Warlock continues to search for the Soul Stone but encounters an unexpected foe…the SILVER SURFER?! Keep your eyes to the stars as Marvel’s biggest cosmic story continues!

Why It’s Hot: Gerry Duggan, Aaron Kuder and friends have been quietly turning out what is arguably the best Guardians Of The Galaxy run in the pages of All New Guardians Of The Galaxy. When that book ended the creative team looked to continue their story in an even bigger fashion with Infinity Countdown. I know I already mentioned Avengers: Infinity War in a previous entry in this week’s column, but I’d be remiss not to do it again here. If you came out of this movie looking for something with similar sensibilities you’ll want to pick up this series. The Infinity Stones aside, Duggan’s writing is the closest in style and tone that a Marvel comic comes to the MCU. If you walked out of the theater and wondered where you could read more about the Infinity Stones the answer is this comic. If you don’t care about the movies and just want to read good comics then this is also for you. 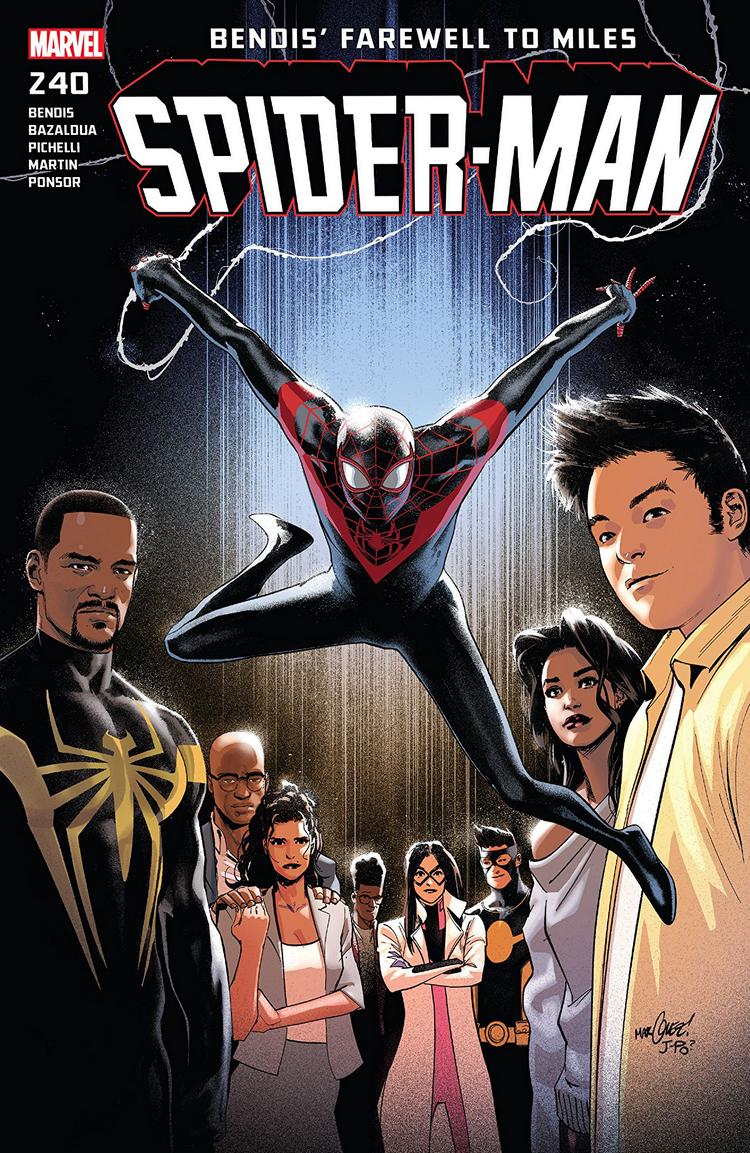 THE END OF AN ERA FOR MILES MORALES!
Marvel Comics proudly presents the final issue of Bendis’ epic (bio-electric) run! Over seven years and across two universes, Miles Morales has been an Ultimate, a Web-Warrior, an Avenger and a Champion. A New Yorker, a student, a son and a friend. And whenever the city needed him (and one time when all of reality needed him), he was always SPIDER-MAN. Don’t miss the chance to see comics superstar Brian Michael Bendis bid farewell to one of his most beloved creations, and to glimpse what the future may hold for Miles Morales.

Why It’s Hot: Brian Bendis has been writing Spider-Man in one form or another for almost eighteen years. That’s right, Bendis’ run that began in Ultimate Spider-Man #1 would almost be an adult if it was human. Since the first issue was published in the Fall of 2000 Bendis introduced a new version of Peter Parker that few thought would succeed only to end up breaking Stan Lee and Jack Kirby’s record for most consecutive issues of a comic book by the same creative team alongside Mark Bagley, Peter Parker was killed, Miles Morales was introduced, Peter Parker was brought back, the Ultimate Universe was destroyed, Miles was brought into the Marvel Universe proper where he’s become a crossover star with his own animated film on the way, and then the Ultimate Universe was shown to still exist. This isn’t to mention the almost 250 other issues, and countless memories along the way. This run has been going on for over half of my lifetime, and it will be weird without it. All good things must come to an end however, and it will be exciting to see what other writers bring to the story of Miles Morales. With that said, thank you for all the years of stories Mr. Bendis, and hopefully you know this run will go down as one of the all time greats. 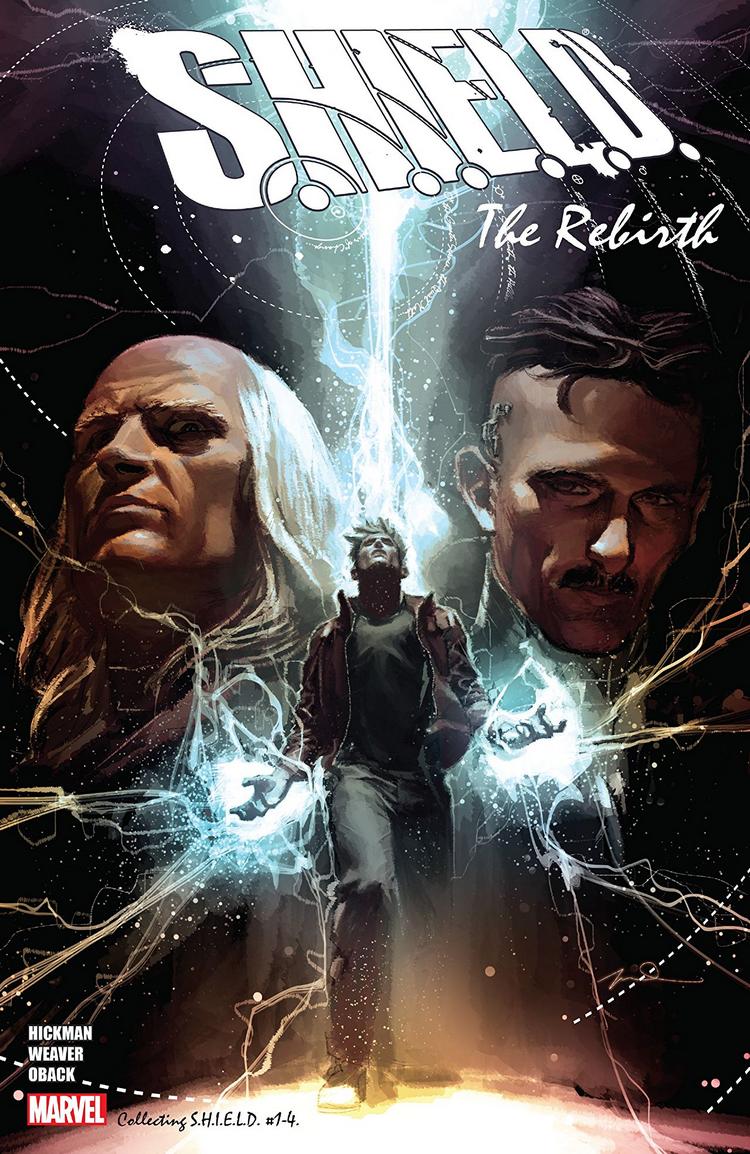 Delve deeper into the hidden past of S.H.I.E.L.D. – along with some of history’s greatest minds! Michelangelo has been pulling the strings for years, and is now becoming the prime mover. Can he keep Leonardo Da Vinci and Isaac Newton from killing each other and destroying the Brotherhood of the Shield? The battle for the Immortal City comes to a climactic conclusion! Leonid makes his choice between two fathers! Michelangelo and Nikola Tesla kick their plan into high gear! Galileo takes on Galactus – long before the Fantastic Four did! The truth behind Nostrodamus stands revealed! And Howard Stark lays the foundation for the espionage organization you know and love! Catch up on Jonathan Hickman and Dustin Weaver’s secretive S.H.I.E.L.D. saga – before the eagerly anticipated finale! Collecting S.H.I.E.L.D. (2011) #1-4.

Why It’s Hot: We don’t usually cover reprints here at the Hot Five Headquarters, but I decided to make an exception this week. This month sees one of the best unfinished comic book stories finally come to an end after years of waiting. Marvel, realizing that a lot of readers either weren’t reading comics, forgot what happened in, or missed out on S.H.I.E.L.D. when it first came out decided to repackage the first four issues of the story into one comic for a low price of $6. If you were recently left wondering why and when Leonardo Davinci became a Marvel character you’ll want to read this. If you like awesome comics you’ll want to read this. If you don’t want to pull the original issues out of a long box somewhere before the final two issues are released you’ll want to read this. This series is full of really cool stuff and you’d be remiss to disregard it because of it being a reprint.