• Marvel’s Mightiest Women finally get their own explosive series!
•  In a secluded corner of the Battleworld, an island nation is fiercely protected by a team of Avengers the likes of which has only ever been glimpsed before…
•  Fighting to protect the small sliver of their world that’s left, the Amazing A-FORCE stands shoulder-to-shoulder, ready to take on the horde!

Why It’s Hot: G. Willow Wilson and Marguerite Bennett teaming up to write an all female Avengers team with some of Marvel’s heaviest hitters. There is little doubt that this is the most anticipated Secret Wars title, and possibly the most anticipated new launch of the summer (outside of Secret Wars proper). Despite the uneducated opinion of a certain Harvard professor (How about that? Uneducated and Harvard in the same sentence) last week this comic features great writers, great characters, and could be the book fans of Marvel’s female characters have been waiting for. 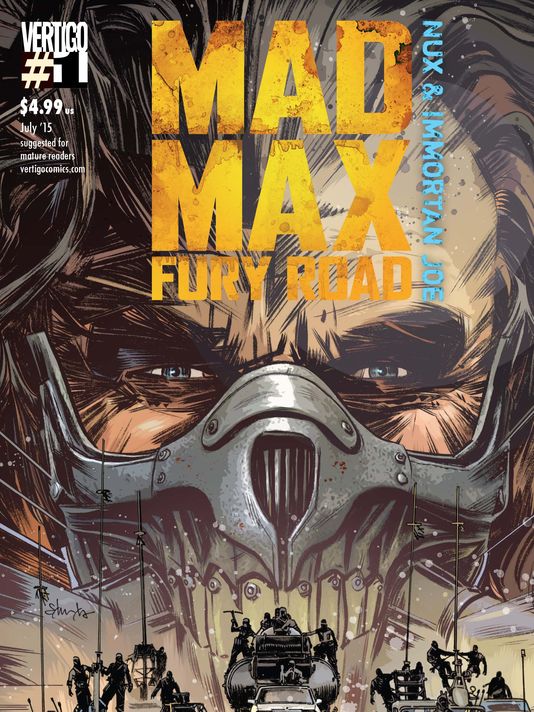 In a fallen world ravaged by oil and water wars, humanity exists without law or mercy. All those who wander the Wasteland are ruled by a single imperative…survive!
Among them is Max Rockatansky, a Road Warrior haunted by his turbulent past…

“It’s hard to know who is more crazy.
Me or everyone else?!”

And don’t miss the story of Nux, one of the Immortan’s “War Boys,” who knows only the chaos into which he was born.

From the mind of George Miller, the creator of the Mad Max trilogy, comes a brand new epic tale that serves as a prelude to the upcoming film, Mad Max: Fury Road!

Why It’s Hot: Mad Max: Fury Road came out here in the United States this past Friday, lived up to thirty years of hype, and then some. It is one of the best movies of 2015 so far, and will go down as one of the single greatest action movies EVER. If you love action movies, and haven’t seen it then do treat yourself to see it on the biggest screen possible. With WB releasing the movie it only makes sense that DC Entertainment will be handling the comic book tie-ins under the Vertigo banner. Spearheaded by George Miller himself, and featuring work from amazing collaborators with some having worked on the movie. The fun started last week with the Deluxe Hardcover Mad Max: Fury Road: Inspired Artists featuring sixty-five great artists providing beautiful double page spreads inspired by the movie. This week finds the first of four prelude issues hitting stores, as the story of the vile Immortan Joe and Warboy Nux get fleshed out. In coming weeks we will get issues devoted to Furiosa (Might want to keep your eyes on this column that week), and two devoted to Mad Max himself. Hopefully these books are successful, and opens the door for the continuing adventures of Max Rockatansky (or even the great Guitar Man).

• A forbidden zone of wild HULKS
•  A battle-worn gladiator named STEVE ROGERS
•  A journey that could break the spirit of a world’s greatest freedom fighter.
•  PLUS: A back up story by a surprise creative team!

Why It’s Hot: There are going to be a lot of Secret Wars books over the coming months, and to be honest I am excited for just about all of them. Planet Hulk was one that was lower on my list of anticipated tie-ins, but then the preview pages came out and blew me away. This book looks to be absolutely wild with stunning art from Marc Laming. Steve Rogers, Devil Dinosaur, and a whole bunch of Hulks in a crazy adventure story. Throw in a backup story from Greg Pak, the creator behind the original Planet Hulk, and you have one hot comic on your hands. Whether you’re reading the main title or not, it’s titles like these that have the potential to be fun for fans of every sort.

• MILES MORALES and the rest of the heroes of the ULTIMATE U face final extinction
•  As the end of their world becomes inevitable, will the heroes’ heartbreaking sacrifices make any difference?
•  The dramatic end of an era begins here!

Why It’s Hot: Confession time. For several years I loved the Ultimate Universe more than I did the traditional Marvel Universe. Don’t get me wrong, I loved both, but the Ultimate U. was truly groundbreaking, and special. Brian Michael Bendis and Mark Millar spearheaded this new universe for a new generation of readers. What was thought to be a huge risk ended up paying off big time. For awhile there Bendis was writing the best Spider-Man comic (some argue that Ultimate Spider-Man is still the best Spidey title), and Millar was writing the best Avengers comic along with one of the best X-Men titles. The past ten years of Marvel in both the comics and movies owe a lot to the work done on the Ultimate books. Now fifteen years after its inception, the Ultimate Universe as a whole was destroyed in the first issue of Secret Wars, and Ultimate End looks to focus on the survivors on Battleworld, and be the final chapter of the imprint that changed comics. It’s only fitting that Marvel has paired Bendis with his long time Ultimate Spider-Man partner Mark Bagley. This is THE quintessential Ultimate creative team, and the perfect choice for this series. Together Bendis and Bagley launched the Ultimate Universe and broke the record for most consecutive issues by a writer/artist team with 111. Now they are back together for five more issues, and it sounds like it’s to say goodbye. 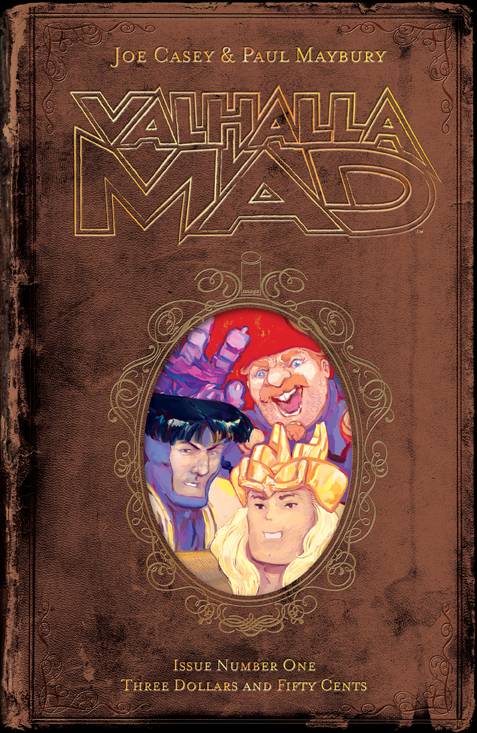 Their names are legend: the Glorious Knox! Greghorn the Battlebjörn! Jhago the Irritator! Three warrior gods vacationing on Earth, just looking to get their drink on and have a good time! Join the drunken festivities with toastmasters JOE CASEY (SEX) and PAUL MAYBURY (SOVEREIGN). The new mythology begins now!

Why It’s Hot: Joe Casey is one of the most underrated comic book writers in the business. He may be loved, and his books well reviewed, but he doesn’t get the recognition as one of the best writers of his generation like he should. Maybe it’s because he hasn’t had the long career defining run on a mainstream title, or that he is a bit more on the subversive side, or that he has spent a lot of time working in animation. Still, if there was a comic book hall of fame like the ones they have for different sports, Casey’s career would indicate that he is well on his way to being inducted. So we should be celebrating the fact that he is once again launching a brand new creator owned title at Image. Along with artist Paul Mayberry, Joe Casey brings us Valhalla Mad. The book is essentially what if Joe Casey was able to write Thor and The Warriors Three coming to Earth for the sole purpose of getting absolutely hammered. If you think that sounds remotely interesting there’s a good chance you will enjoy Valhalla Mad. It has all the signs of a hilarious, wild romp, and should not be overlooked this Wednesday.