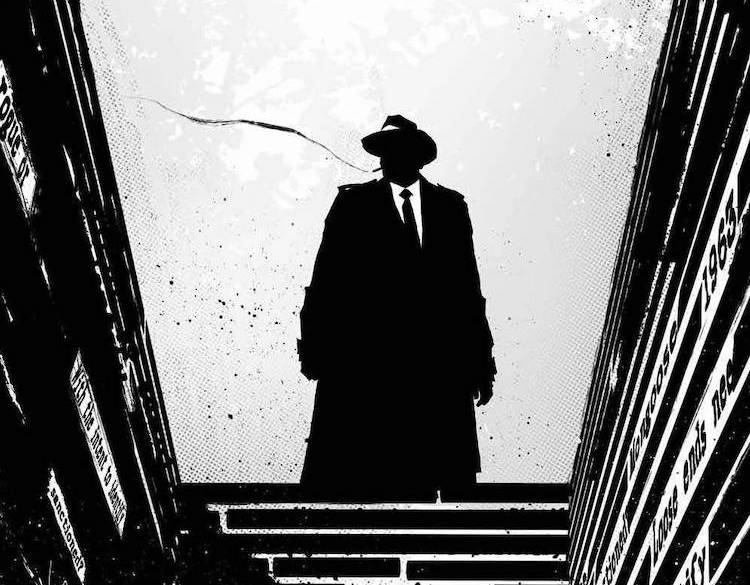 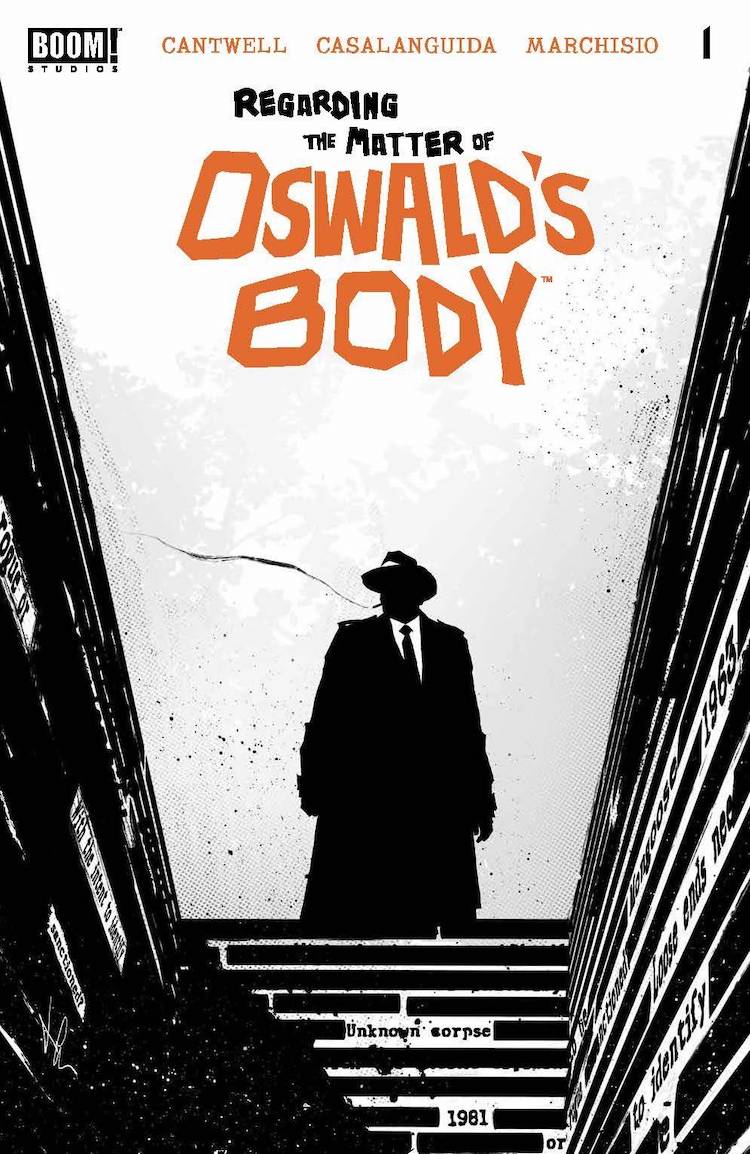 REGARDING THE MATTER OF OSWALD’S BODY #1
Written by Christopher Cantwell
Art by Luca Casalanguida
Published by BOOM! Studios – $3.99

Where is Lee Harvey Oswald’s body?

The Kennedy assassination is a rat’s nest of conspiracy theories: mafia involvement, the second gunman, government cover-up… but the most important chapter of this sordid tale may just be the theory that the body buried at Oswald’s Rose Hill gravesite is not actually Lee Harvey himself.

Meet the ragtag group of “useful idiots” who are unwittingly brought together to clean up the crime of the century – a wannabe cowboy from Wisconsin, a Buddy Holly-idolizing (former) car thief, a world-weary Civil Rights activist ready for revolution, and a failed G-Man who still acts the part – and specifically, regarding the matter of Oswald’s body.

Why It’s Hot: Christopher Cantwell not only created one of the best shows of last decade in AMC’s Halt & Catch Fire, but ever since then he’s been making a name for himself in comics at the very highest levels, including at Marvel where he’s written Doctor Doom, Captain America, Iron Man, and plenty of heavy hitters. Now he’s teaming up with Luca Casalanguida for a new series at BOOM! Studios that explores the conspiracy theory that Lee Harvey Oswald’s body isn’t the one buried in his grave. Now we are getting that story in the form of a wild crime comic with a memorable cast of characters. This might not be a book that was on your radar, but you might want to make sure to pick it up this week! 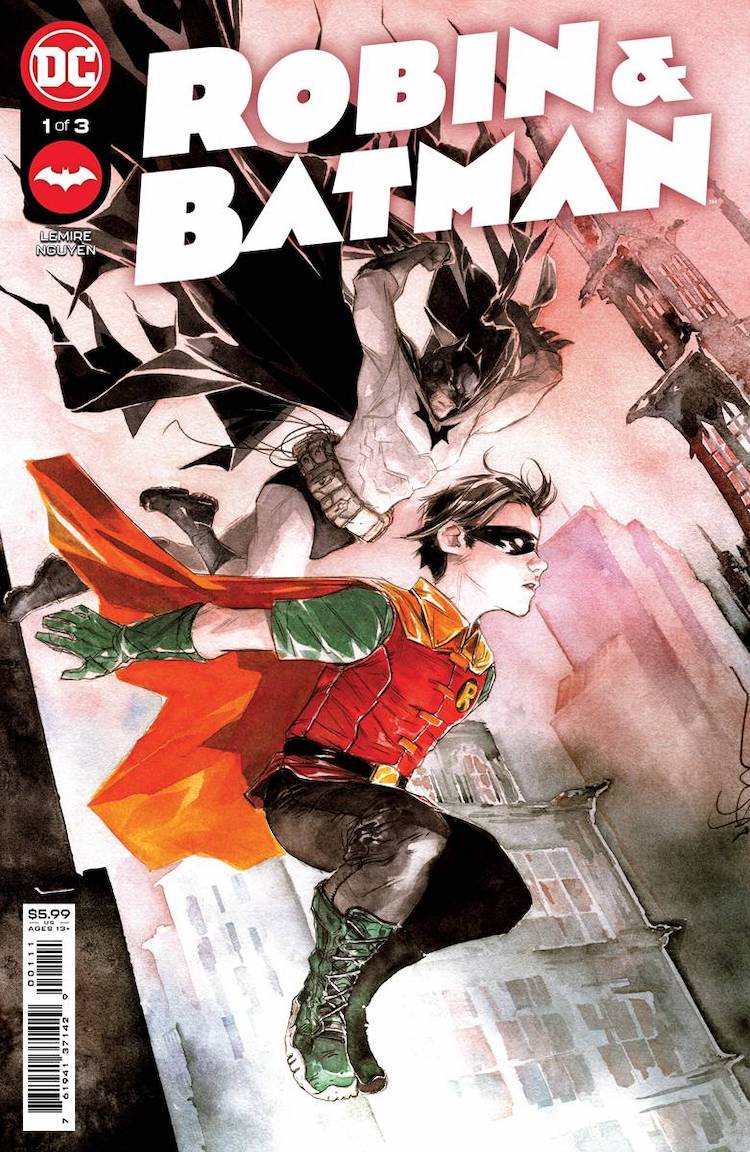 The legendary story of Batman and Robin has reached nearly mythic proportions: the crime-fighting Dynamic Duo, always one step ahead of the criminals they pursue and never meeting a case too big. This isn’t that story. This is the story of a young Dick Grayson, newly orphaned, struggling to find his way in a strange, difficult, dark new world…This is the story of Robin and Batman.

The bestselling creative team behind the Eisner-winning Descender, Jeff Lemire and Dustin Nguyen, reunite in Gotham City to tell the story of a remarkable young man learning to navigate an incredible new world!

Why It’s Hot: The Eisner Award winning creative team of Jeff Lemire and Dustin Nguyen have reunited at DC Comics to tell the story of Dick Grayson’s early days as Robin The Boy Wonder. This is another example of why DC has been on such fire this year. They’ve been bringing together creators at the top of their game to tell the best stories possible, regardless of where it fits with the continuity. This is an absolutely beautiful comic drawn by an artist who is no stranger to Gotham. It also appears to be an absolutely vital Robin story written by one of the best in the business today. 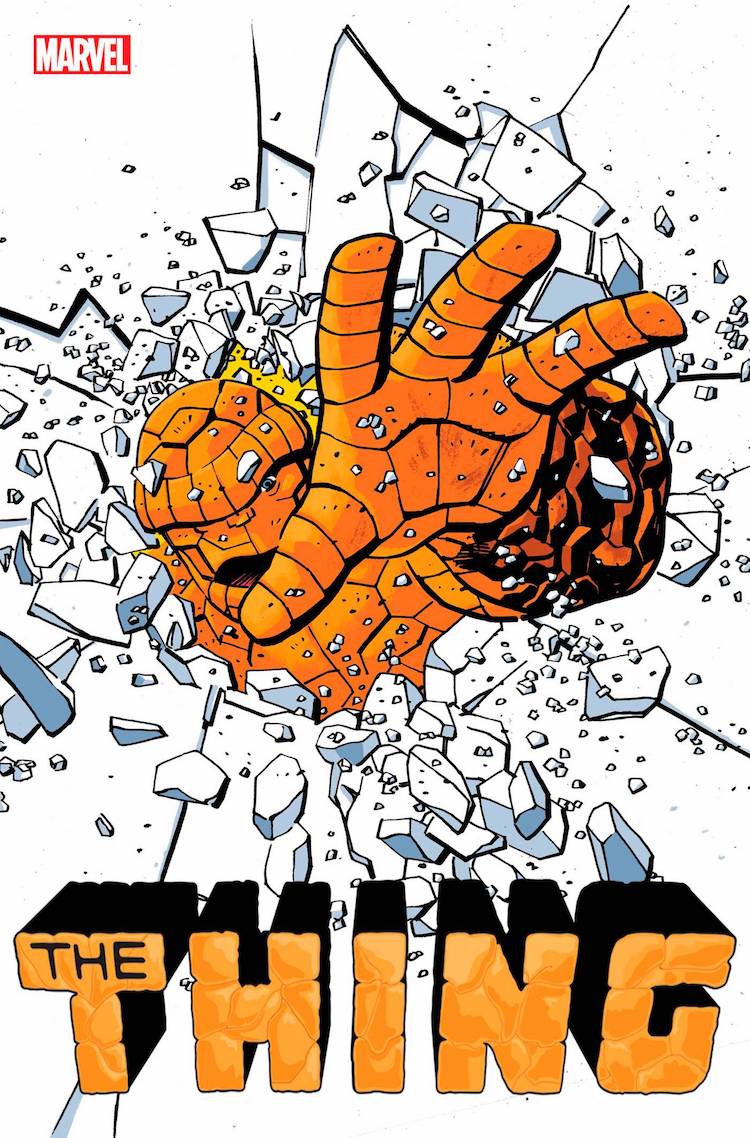 THE NEXT BIG THING BEGINS HERE!

Renowned storyteller Walter Mosley brings his signature style to a sweeping saga of Yancy Street’s favorite son that will range from the urban sprawl of the back alleys of Manhattan to the farthest reaches of the cosmos itself! A lonely evening and a chance encounter (or is it?) sends Ben Grimm embarking on a sojourn that will have him encountering – and battling – figures both old and new. Featuring guest appearances from figures drawn from throughout the Marvel Universe as well as precision artwork by Tom Reilly, THE NEXT BIG THING will remind audiences why the Thing is one of the most popular and beloved characters in the history of comics!

Why It’s Hot: Benjamin Grimm finally gets another solo series! This one is brought to us by acclaimed novelist Walter Mosley, and artist Tom Reilly. This comic feels like a true throwback to the Silver Age in both the writing and the art, but it reads more like your memories of the Silver Age, rather than how those books actually were. Both Mosley and Reilly do a phenomenal job in making the issue feel old school while keeping many of the qualities of modern comics. If an old school, slightly ridiculous, and very fun Silver Age inspired comics starring The Thing sounds like uh your… thing then you’ll definitely want to read this comic. 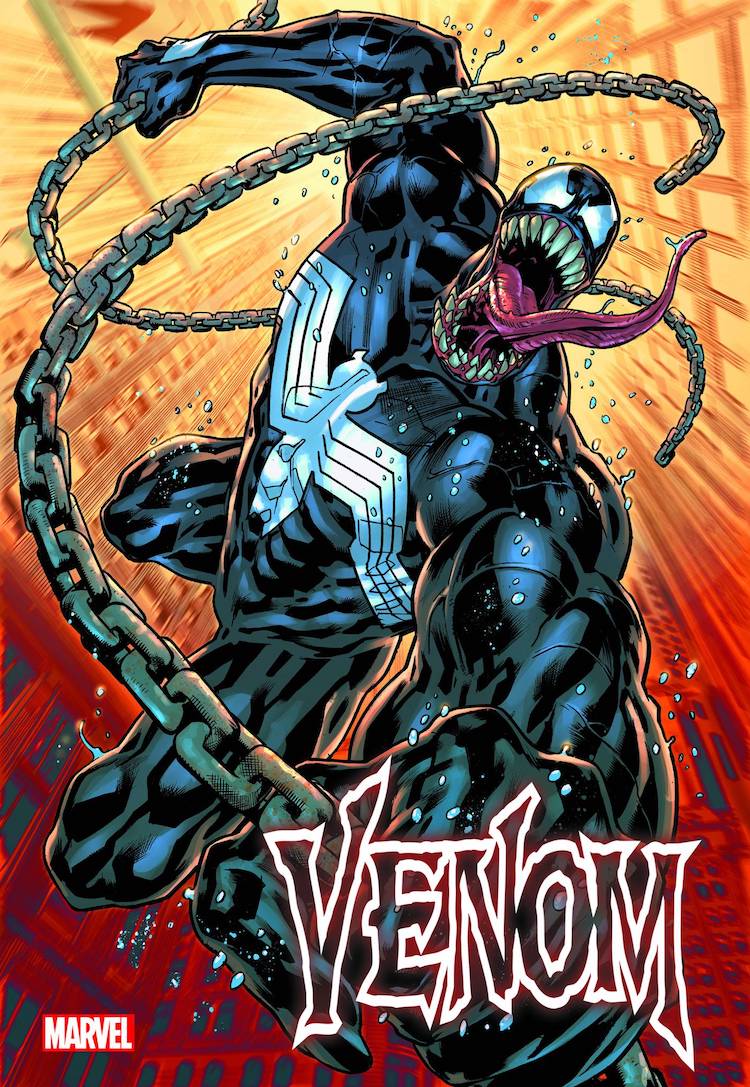 AN EPIC NEW ERA FOR THE SINISTER SYMBIOTE STARTS HERE!

Hot off the heels of VENOM #200 and EXTREME CARNAGE, we’re closing out 2021 with one of the most ambitious books in symbiote history – an all-new VENOM from some of comics’ greatest talents! Marvel mainstay AL EWING, who himself has just ended a character-redefining run on IMMORTAL HULK, is being joined by RAM V, a horror maestro all his own, to craft a mind-bending and gut-wrenching tale of symbiosis the likes of which the Marvel Universe has never seen! AS IF THAT WASN’T ENOUGH, they’ve been joined by industry legend BRYAN HITCH, who is leaving IT ALL ON THE PAGE! We haven’t led you astray yet, have we? So trust us when we tell you that you have NEVER seen a VENOM like this!

Why It’s Hot: Under the guidance of Donny Cates and Ryan Stegman, Venom reached heights not seen by the character since the boom period of the 1990s. Riding high off the last few years, Marvel has enlisted some heavy hitters to continue the symbiote’s hot streak. You have the steward of all things Cosmic Marvel in recent years in the great Al Ewing teaming with one of the best up and coming talents in all of comics, Ram V, to do-write this new era. Then to top it all off you have superstar artist Bryan Hitch on art , as he is making his return to Marvel after a stint at DC. Three great creators coming together on one of the most popular comics in recent years is something everyone should be excited for. 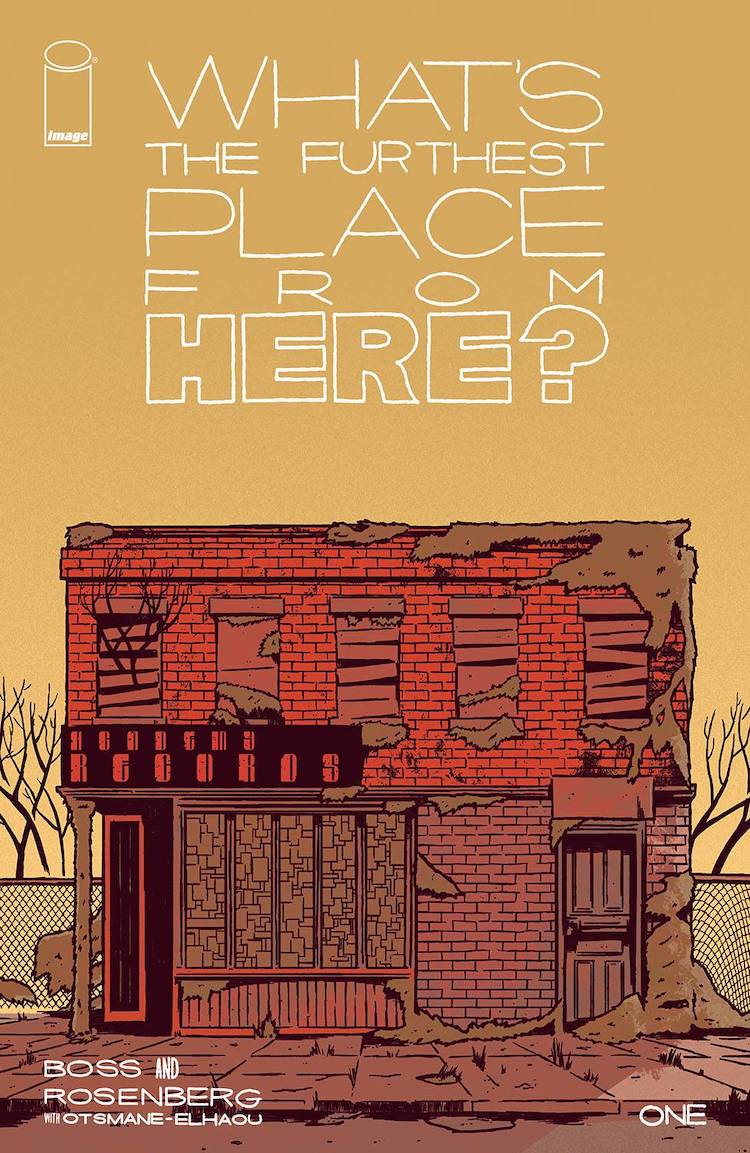 The world has ended. All that remains are gangs of children living among the ruins. But Sid believes there must be something more out there. When she disappears into the wastelands, her gang will risk everything to bring her home. A story about the things that matter most-your survival, your loved ones, and your record collection.

Why It’s Hot: The creative team behind 4 Kids Walk Into A Bank have reunited for a highly anticipated new project at Image Comics. When Rosenberg and Boss work together the end result always gives off a very strong and particular vibe that leaves you wanting to spend more time in the worlds they’ve built. If you’ve read their prior work together you know what I mean, and you’re probably already planning on getting this. For everyone else, come on by and see why the rest of us are excited, and chances are you’ll be hooked.