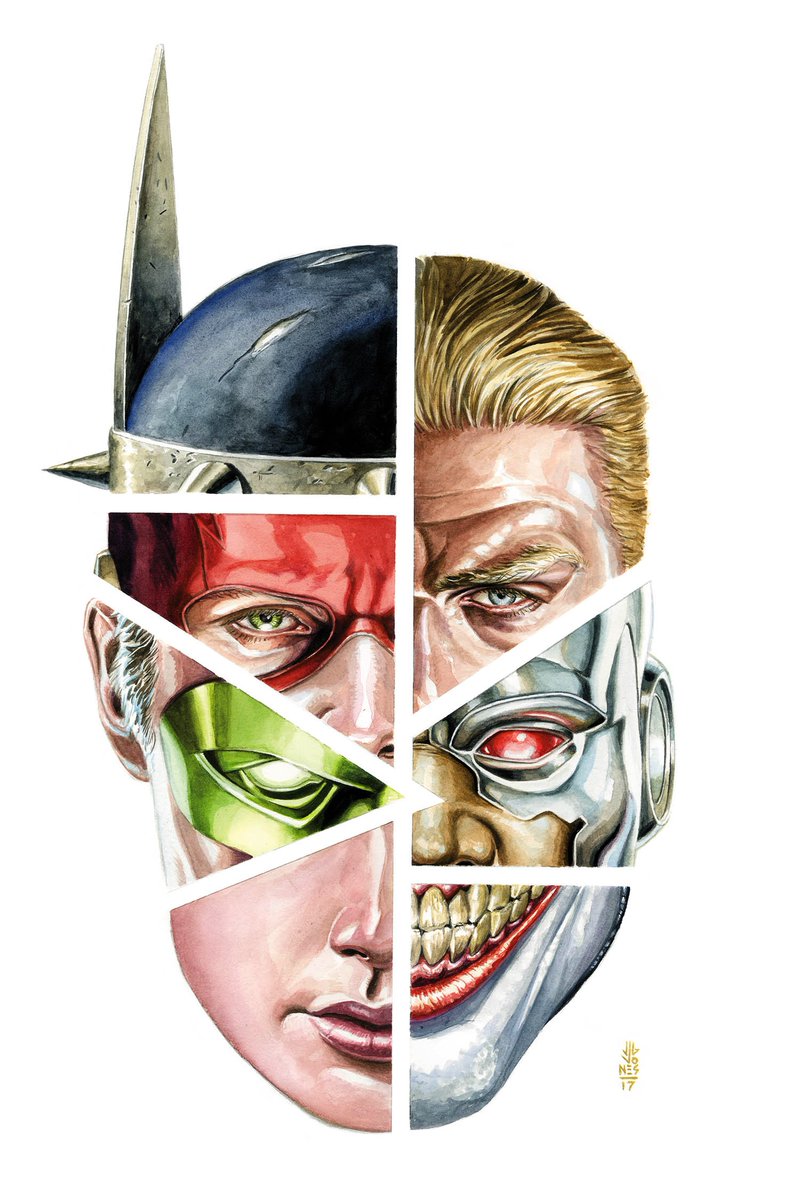 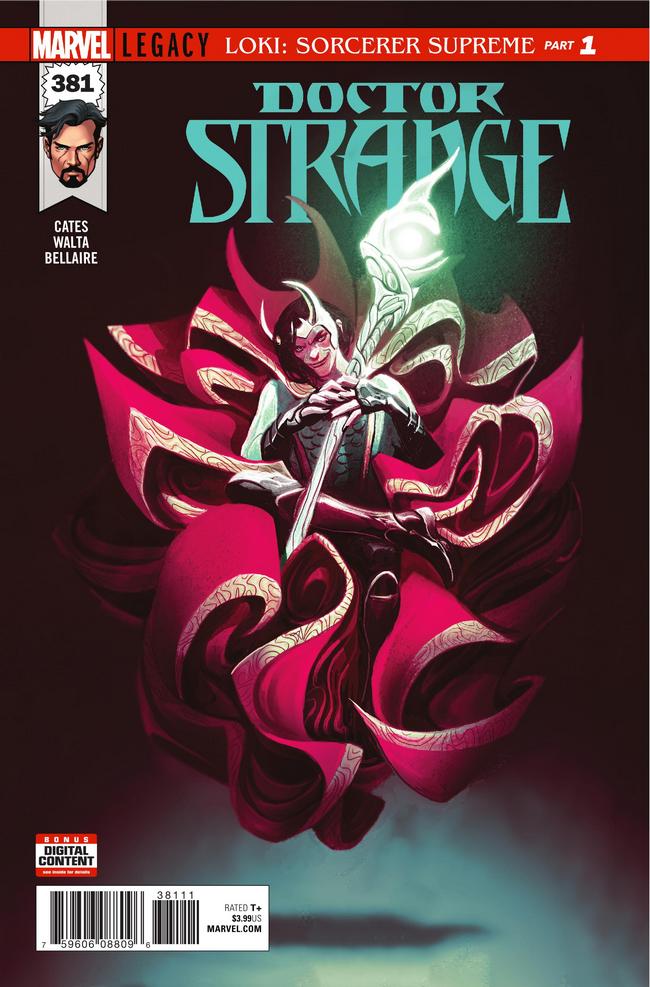 LOKI: SORCERER SUPREME Part 1
Evil is everywhere and the world needs the Sorcerer Supreme more than ever. But is the world ready for LOKI: SORCERER SUPREME? He has the cloak, the spells – he’s even got Zelma Stanton as his assistant (and possibly more?) – but is this the chance he needed to become a hero, or is the god of lies dangerously close to unlimited power? And what happened to STEPHEN STRANGE? PLUS: Includes 3 bonus MARVEL PRIMER PAGES!

Why It’s Hot: Donny Cates is one of the hottest fresh voices working for Marvel today. The art team of Gabriel Hernandez Walta and Jordie Bellaire have proven to be a powerhouse creative duo. A creative team like this telling the story of Loki being the new Sorcerer Supreme? This is what Marvel Legacy is all about! 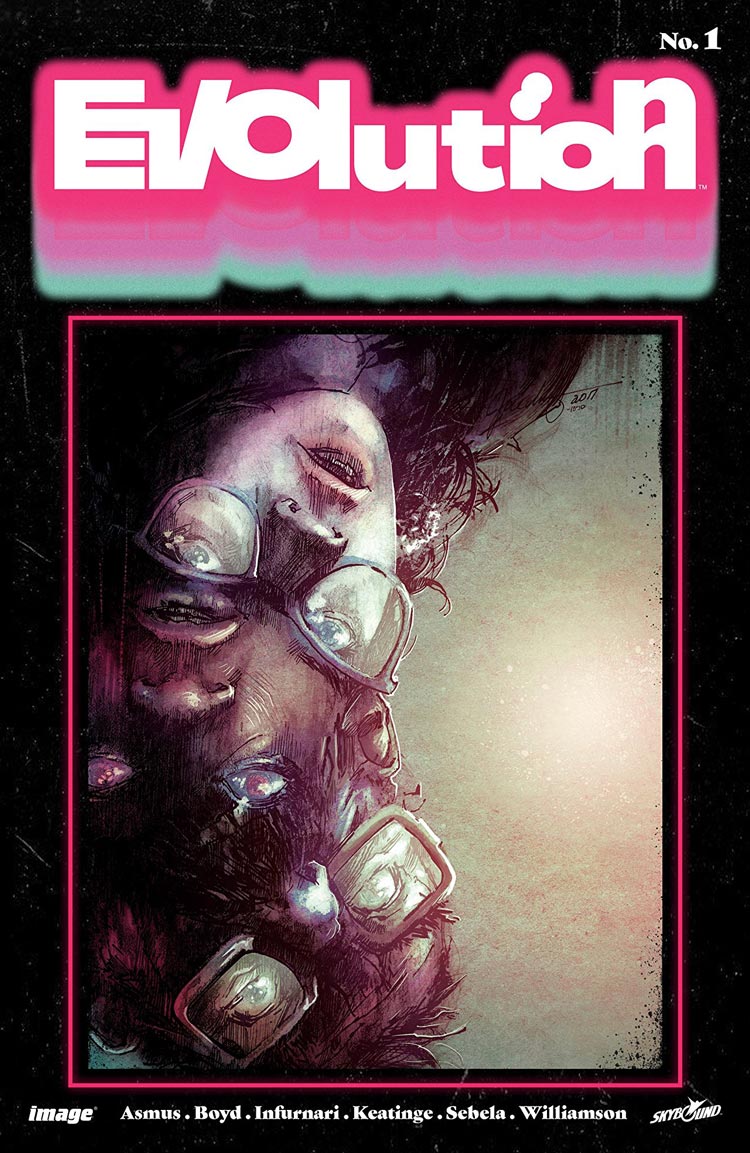 Human evolution has taken millions of years to get to this stage. But next week, we become something new. Around the world, humanity is undergoing rapid and unpredictable changes, and only three individuals seem to notice that their world is being reborn. But what can they do about it?
Skybound unites writers JAMES ASMUS, JOSEPH KEATINGE, CHRISTOPHER SEBELA & JOSHUA WILLIAMSON and artists JOE INFURNARI & JORDAN BOYD to create a new global phenomenon in this oversized debut issue.

Why It’s Hot: A creepy new series from Image’s Skybound imprint featuring a group of great writers, and pitch perfect art from Joe Infurnari and colorist Jordan Boyd. This is a rare experiment with four different writers working in tandem to tell one serialized story. With an extra sized first issue, you’ll get some bang for your buck from this one. 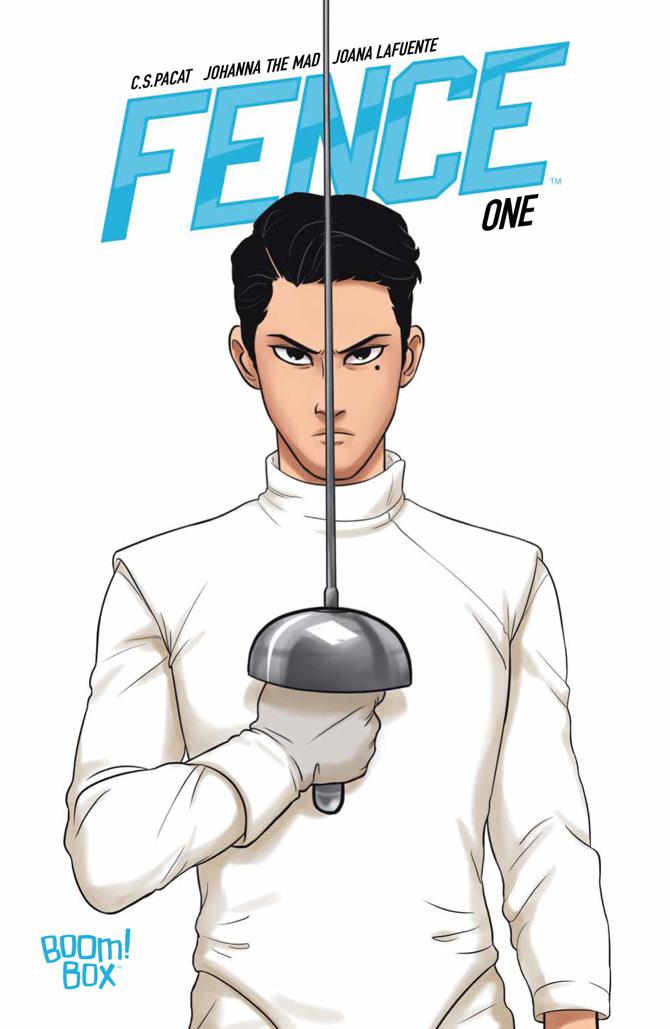 Novelist C.S. Pacat (Captive Prince) and fan-favorite artist Johanna the Mad team up for a new series perfect for fans of Check, Please! and Yuri!!! on Ice. Sixteen-year-old Nicholas Cox is an outsider to the competitive fencing world. Filled with raw talent but lacking proper training, he signs up for a competition that puts him head-to-head with fencing prodigy Seiji Katayama…and on the road to the elite all-boys school Kings Row. A chance at a real team and a place to belong awaits him-if he can make the cut!

Why It’s Hot: You can add another winner to the BOOM! Box imprint with Fence. As you can see above, the solicitation mentions Yuri!!! On Ice, and the comparison is a good one. If you were a fan, and who wasn’t, of the anime that took the world by storm then Fence is for you. If you weren’t a fan of, or haven’t heard of YOI, this book still may be for you. Pacat introduces readers to the world of competitive fencing and an intriguing cast of characters brought to life by the perfectly matched art of Johanna The Mad. This comic is not your traditional superhero fare, but has the opportunity to be a huge hit if it can reach the right audience. 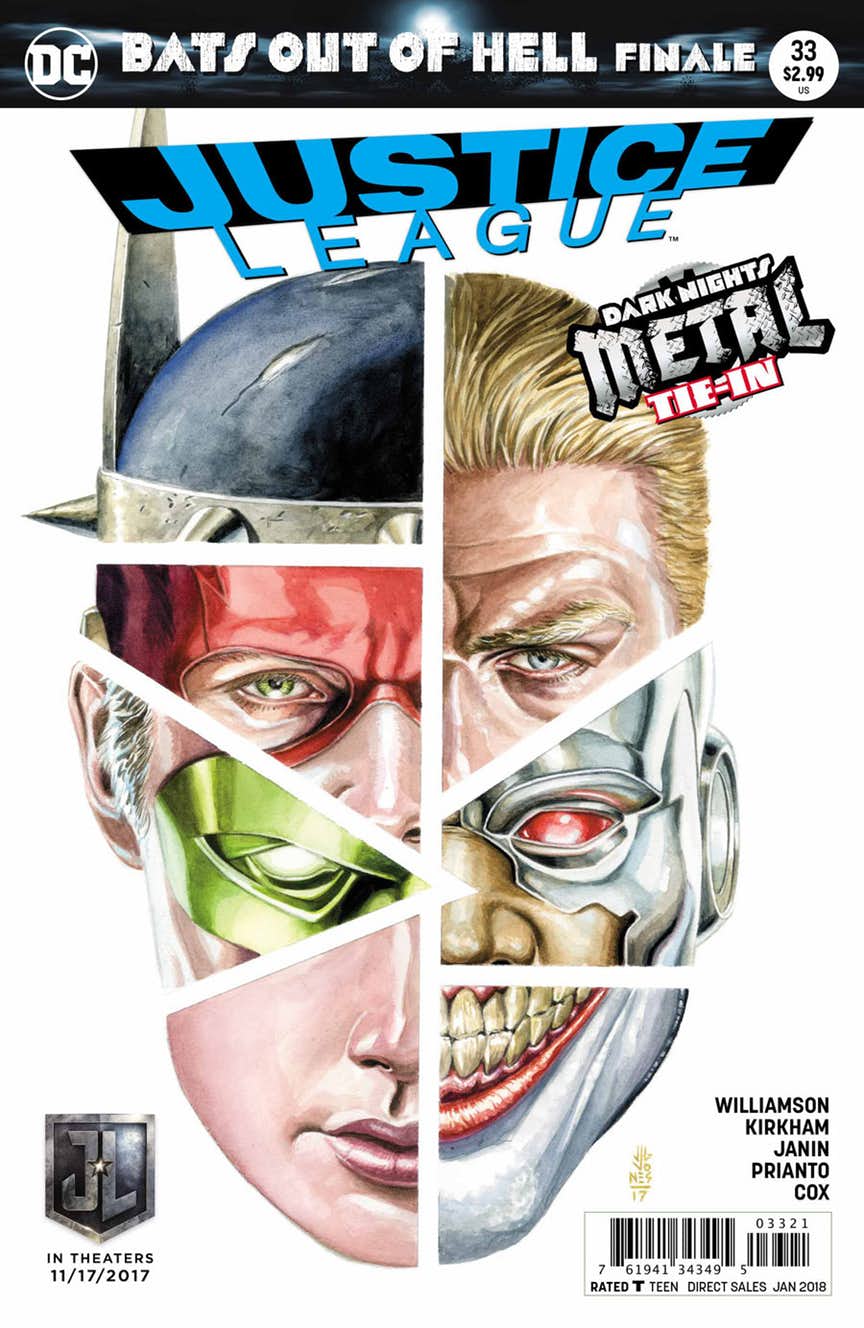 Why It’s Hot: The Bats Out Of Hell crossover concludes with an action packed issue of Justice League that arrives just in time for the big movie opening this weekend. Regardless of whether you’re reading the Dark Nights: Metal event this is issue is a must read for DC fans, and Cyborg fans in particular. Just days before he makes his big screen debut, this issue features some of the best moments the character has seen on the comic page in years. 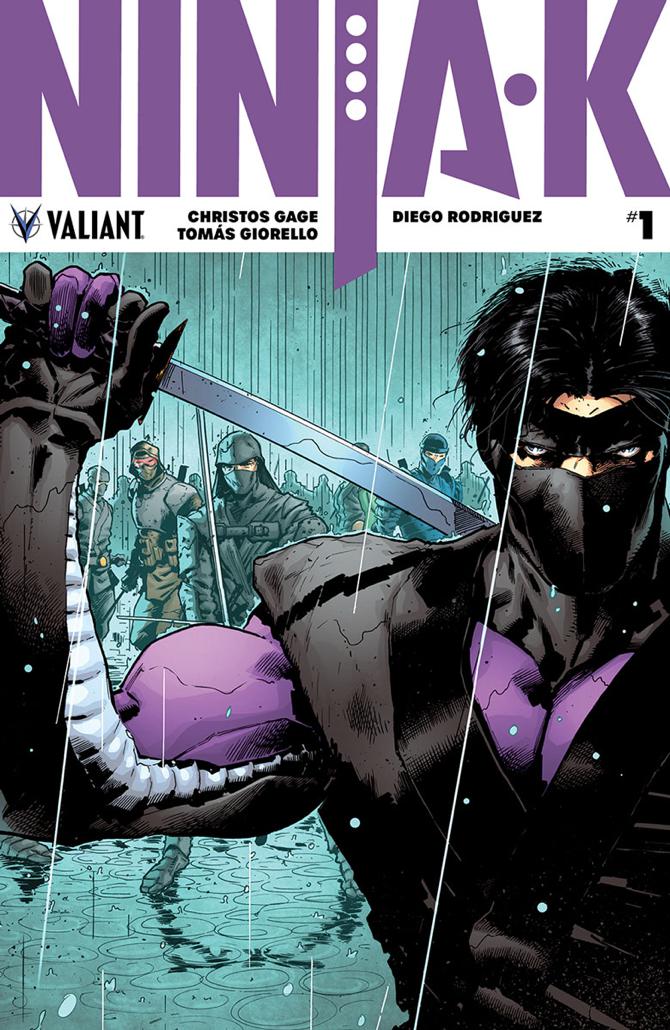 A NEW CAN’T-MISS ONGOING SERIES! From acclaimed writer Christos Gage (Netflix’s Daredevil) and superstar artist Tomas Giorello (X-O MANOWAR), the United Kingdom’s most dreaded intelligence operative delves into the cold, calculating world of espionage and international intrigue!
For nearly a century, MI-6, the most elite branch of Britain’s clandestine intelligence service, has honed a ruthlessly effective, top-secret division – THE NINJA PROGRAMME – into one of its nation’s most finely wielded weapons. Tasked as the first and last line of defense for queen and country, this small shadow army of agents and assassins has produced a succession of notable assets, including NINJA-A, the Queen’s silent weapon of World War I; NINJA-E, the globetrotting secret agent that pulled the Cold War back from the brink of armageddon; and, most recently, NINJA-K, aka Colin King, a brash but fearless instrument of lethality that has saved the world from madmen and terror at every turn.

Why It’s Hot: One of Valiant’s premier characters gets a bold new series for a bold new direction. Veteran scribe Christos Gage, and artist Tomas Giorello are here to turn Colin King’s life upside down. If you like ninjas, or spies, or ninja spies and haven’t been reading Ninjak you’ve been missing out, but it’s okay, as this new series serves as a great jumping on point for new readers!

* Batman #35: The Cat comes face to face with The Bat’s deadly ex with hopes of clearing her name. The stories that Tom King has been telling have been great, but Jöelle Jones being brought in on art is one of the best decisions Team Bat-Family has made.

* Batman Who Laughs #1: The Dark Nights: Metal one shots featuring the origin stories for the Dark Knights of the Dark Multiverse come to an end this week. This is one of the most disturbing Batman comics you will read this week, year, and quite possible ever!

* Mech Cadet Yu: The first arc comes to an end, but thanks to the overwhelming response this isn’t the end! This is the perfect time to get caught up on this wonderful comic from the minds of Greg Pak and Takeshi Miyazawa.

* The Mighty Thor #701: Mangog is back, and who knows what kind of mayhem he will unleash upon all ten realms, as one of the best Thor runs in history continues.

* The Punisher #218: It’s a big week for Frank Castle. Matthew Rosenberg and Guiu Vilanova bring the character into Marvel Legacy, and give him War Machine armor. The Punisher with a weapon like that at his disposal? Things can, and probably will, get wild. Also this’s week, Jon Berenthal brings the character to life in his own Netflix series.

* WWE Survivor Series 2017 Special: A collection of stories about great Survivor Series moments. Yes, including that one. If you ever wanted to read a kayfabe take on The Montreal Screwjob this is the comic for you!

* The Wicked + The Divine #33: While the buzz seems to have quieted on #WicDiv, make no mistake, this comic is still one of the very best the medium has to offer!