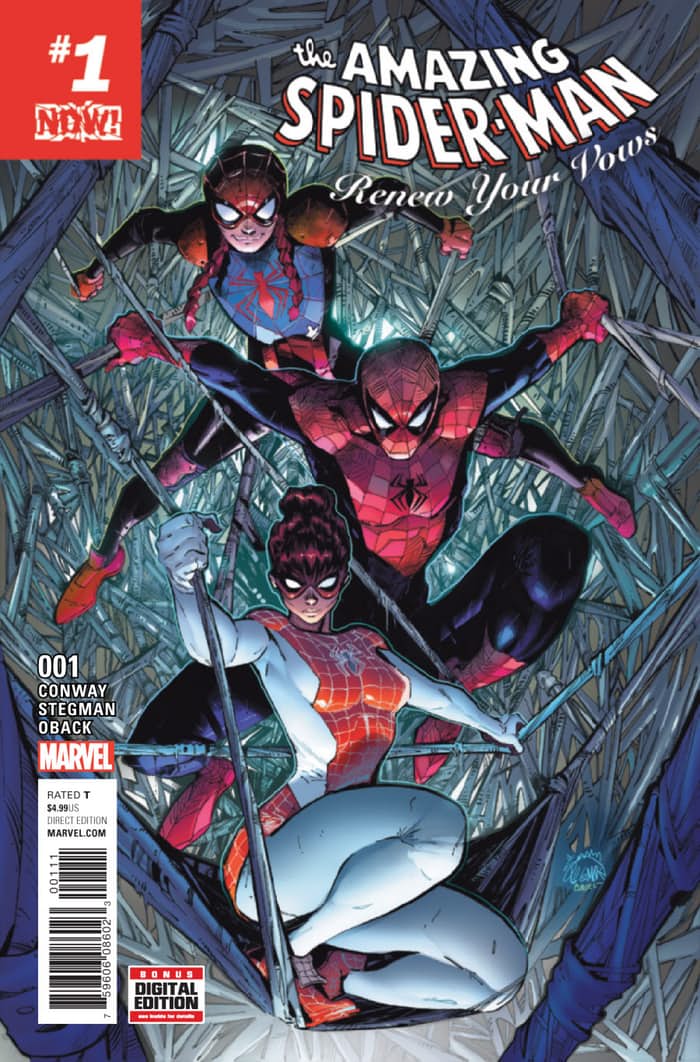 The Parker family is web-slinging and wall-crawling their way into your hearts and into comic shops later this year! Life is good for Peter Parker and Mary Jane; their daughter Annie is their pride and joy, they’re both working and (barely) making ends meet, they’re keeping the streets of New York City safe from super villains…you know, normal family stuff. Oh, did we mention MJ and Annie have Spider-Powers — just like Peter?! Being Spider-Man just became a family affair…

Why It’s Hot: The popular Secret Wars miniseries is back in a full fledged ongoing featuring the Parker Family… all three of them! Legendary Spider-Man writer Gerry Conway has proven over the past few years that he still has the chops to write a solid comic, and Ryan Stegman has been one of the more consistently good artists over the past several years.

Writer ROXANE GAY (Bad Feminst, Hunger) spins a Wakandan love story – its tenderness matched only by its brutality. You know them now as The Midnight Angels, but in this story they are just Ayo and Aneka, young women recruited to become Dora Milaje, an elite task force trained to protect the crown at all costs. What happens when your nation needs your hearts and minds, but you already gave them to each other? Illustrated by industry veteran ALITHA E. MARTINEZ (Iron Man, Black Panther).

And in a special backup story, acclaimed poet YONA HARVEY (Hemming the Water) explores the true origins of The People’s mysterious leader Zenzi. Black Panther thinks he knows who Zenzi is and how she got her powers, but he only knows part of the story… Illustrated by rising star AFUA RICHARDSON (Genius).

Why It’s Hot: There are so many reasons this comic just might be the most important comic Marvel releases this year. There’s the black women on the creative team, and the LGBT leads that make it one of the most diverse comics ever to be released by Marvel. Beyond that even, Gay, Coates, and Harvey might be the single most accomplished group of creators ever to work on a comic together. World Of Wakanda is an important step for superhero comics in several directions.

From the violent streets of Chicago, a new armored hero rises! Clad in her very own Iron Man armor, Riri Williams is ready to show the Marvel Universe what she can do as the self-made hero of tomorrow. But is she ready for all the problems that come with stepping into Iron Man’s jet boots? Where’s a genius billionaire playboy philanthropist

Why It’s Hot: Riri Williams has been one of the best new characters in comics this year. She stole the page every time she showed up in the last volume of Invincible Iron Man, and it’s exciting to see what she does with her very own title. This is also a big deal and leap of faith from Marvel, as they are replacing what is inarguably their most recognizable character in Tony Stark with a 15 year old black girl. That’s awesome, and a tad bit crazy. Hopefully readers help make sure the decision pays off.

Meet Violet Paige, a celebutante with a bad attitude and a temper to match, who no one suspects of having anything lying beneath the surface of her outrageous exploits. But Violet isn’t just another bored heiress in the upper echelons of Gotham City’s elite. Motivated by her traumatic youth, Violet seeks to exact vengeance on her privileged peers as the terrifying new vigilante known only as Mother Panic.

Why It’s Hot: Young Animal has quickly become one of the very best imprints in comics. Every single issue in the first three series have been phenomenal. Now the imprint sets it’s sight on Gotham City? I can’t wait to see what Houser and Edwards have in store for us with Mother Panic.

Steve Orlando (Midnighter, Virgil) brings us his only original series of 2016, a gripping story about the nature of identity.

Once every seven years, Earth overlaps with Ektae, a world where alchemy is not pseudo-science but the driving force of industry. For seven days, Ektae breaches our world, bringing dirty magic and ideas.
Jordan Molossus was born of Earth and Ektae and abandoned by both, but when he receives two cast iron urns containing his estranged fathers’ ashes, he’ll leave everything behind to put his parents to rest before Ektae disappears for another seven years.

Why It’s Hot: I don’t know how much more we can sing the praises of Steve Orlando here at Comicosity, but if he keeps producing the quality comics that he has been we will keep our voices ready. What makes Namesake special is that Orlando has been busy with his commitments to DC, so this comic is his only creator owned series on the year. If you became a fan through his work at DC this might be your first chance to check out his work beyond the Big 2.