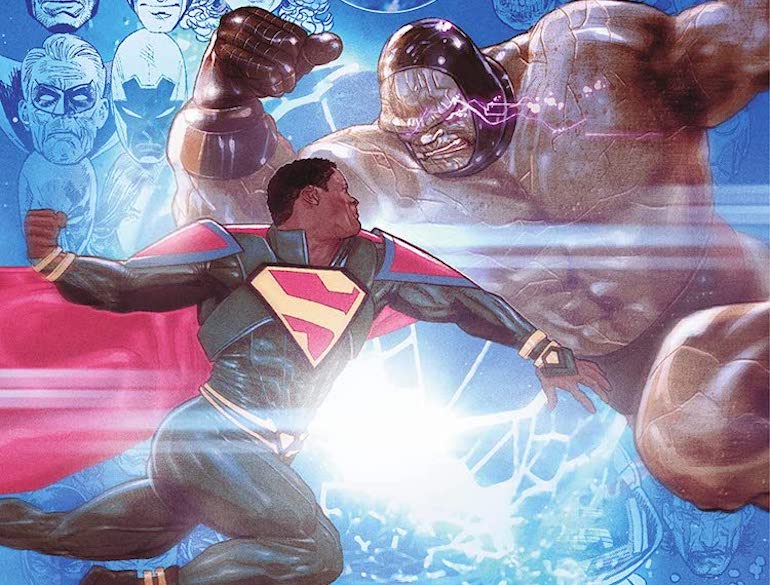 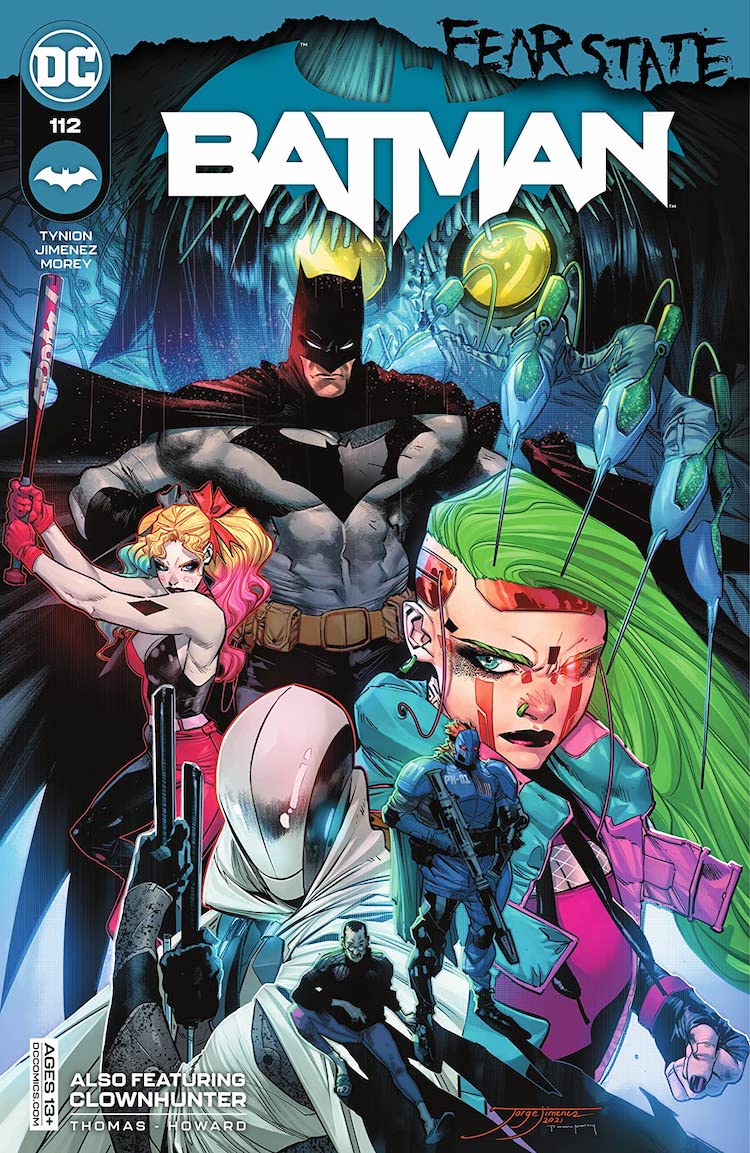 A story over a year in the making and set into motion with Infinite Frontier #0, Fear State begins! Batman played into the hands of the Scarecrow, who has unleashed a coordinated attack on Gotham City through his manipulation of Simon Saint and Peacekeeper-01! But there are other forces at work with the emergence of an Anti-Oracle spreading fake news across all channels and inciting terror and violence on the streets of Gotham!

Backup: Clownhunter has turned down help from Batman, Leslie Thompkins, the Red Hood, and everyone else who has offered it to him, thinking that he can handle being a vigilante on the streets of Gotham City by himself. But when he takes a shot at fighting the Scarecrow one-on-one, he’ll learn very quickly how much in this city he’s not ready for yet.

Why It’s Hot: James Tynion has spent the last few years cementing himself as one of the biggest names in comics, but it has been this run with the Dark Knight that catapulted him into superstardom. He has more than lived up to following in the footsteps of names like Scott Snyder and Tom King. We now know that he is leaving the title in a few months, and Fear State feels like even more of a culmination of his run than it already had. After months in the shadows Scarecrow’s plan to strike fear into the heart of Gotham is underway. 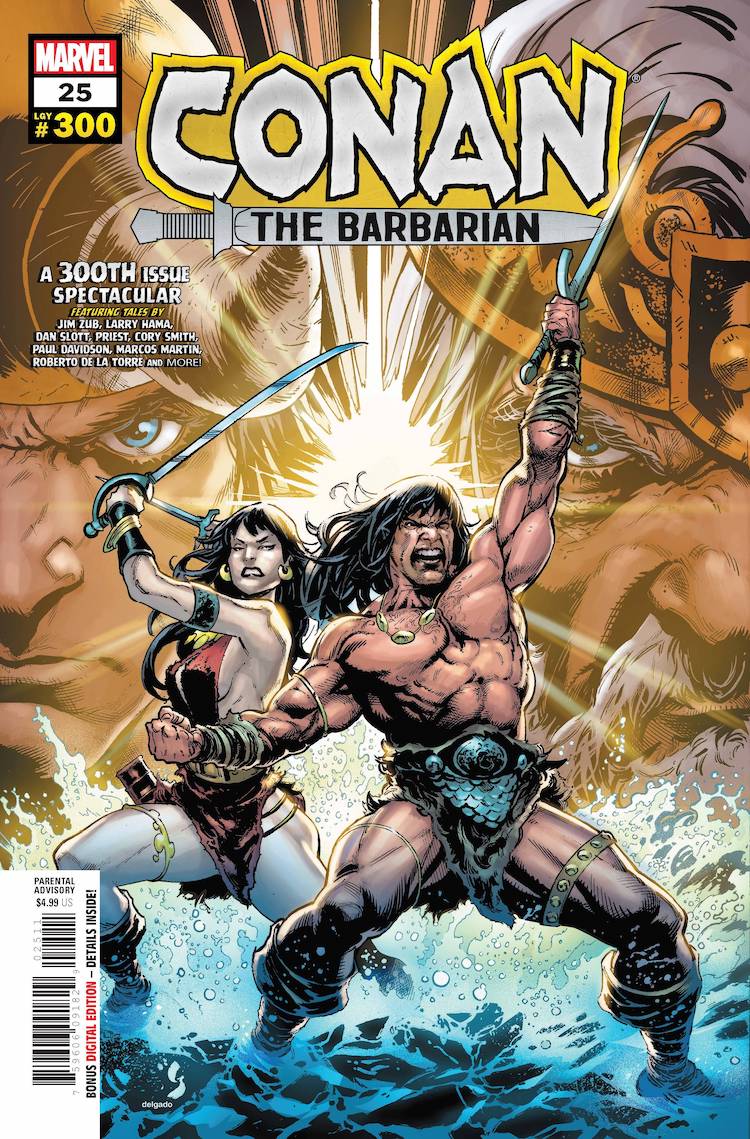 CONAN THE BARBARIAN #25
Written by Jim Zub & Various
Art by Cory Smith & Various
Published by Marvel Comics – $4.99
You can find it here: Amazon/comiXology

CELEBRATING 300 ISSUES OF CONAN THE BARBARIAN… AND THE RETURN OF BÊLIT!

By Crom and Mitra, it’s been 300 issues since Roy Thomas and Barry Windsor-Smith first brought the Barbarian to comics in 1970’s CONAN THE BARBARIAN #1! CONAN’s oversized 300th-issue spectacular kicks off with Jim Zub and Cory Smith’s ongoing saga, as we return to Conan’s much-lauded days sailing with the queen of the seas herself, BÊLIT! But – past, present and future will collide in ways unexpected and strange!

Sharpen your blade for three additional, all-new tales from across Conan history! Dan Slott enters the Hyborian Age with Marcos Mart n, for an untold NIGHT OF OBLIVION from Conan’s thieving days. Larry Hama and Christopher Priest at last return to the saga with their own new stories – from a hotheaded young barbarian in battle to an aged KING CONAN, who must defend his kingdom from the re-emergence of WRAARL, the DEVOURER OF SOULS!

Why It’s Hot: Conan has had a long and storied history with Marvel Comics, and this week finds the publisher celebrating the 300th issue of everybody’s favorite barbarian. A few of comic’s biggest names join Jim Zub and Cory Smith to put together a comic that fans new and old will not want to miss. 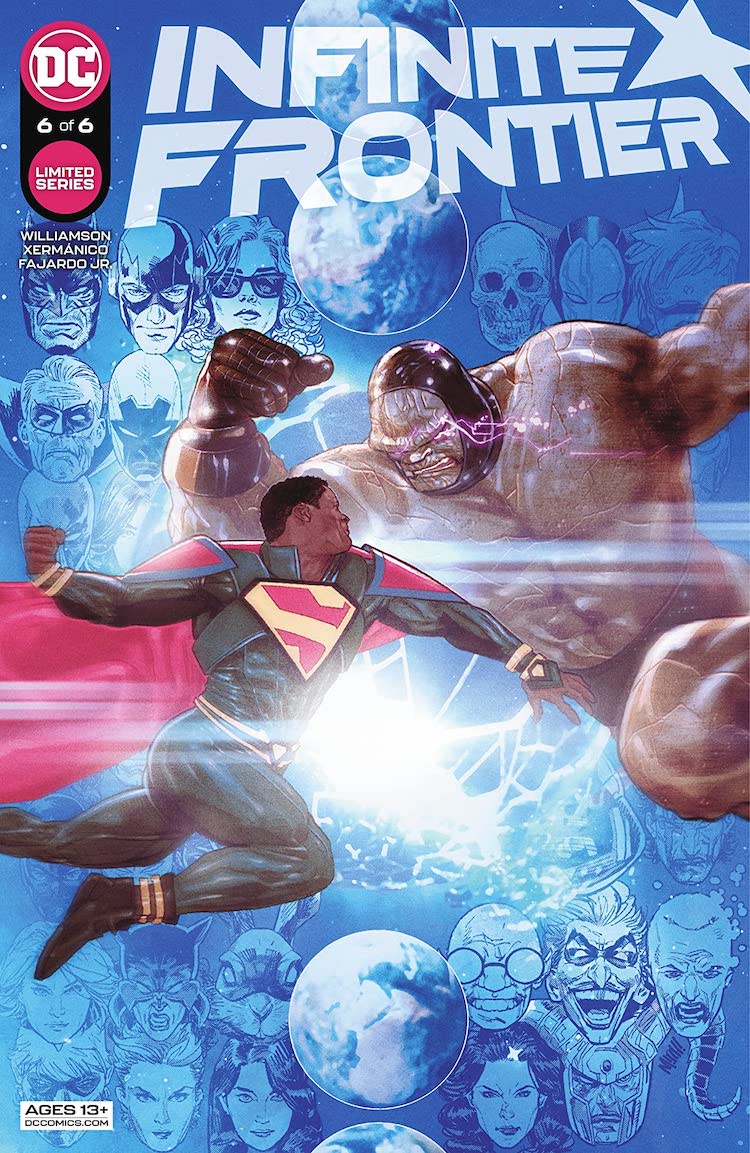 One story ends and the next phase of the DC Multiverse begins. We have one name for you: DARKSEID. Our heroes knew that someone had been pulling the strings this entire time, but are they prepared for it to be the biggest bad of all? As President Superman, Alan Scott, Roy Harper, and the rest converge for a showdown, the secret of Omega Planet is revealed. Plus, Barry Allen is put on a path he may never get off!

Why It’s Hot: Infinite Frontier, as both a mini series and line wide branding, has been a smashing creative success over the last several months. This has been the most cohesive and singular that the DC Universe has felt in literally a decade, and the funny part is that the multiverse has played a huge part in that. Josh Williamson has been smack dab in the middle of everything, and during a time of change at the publisher he has found himself as one of the architects of the line, and I’m here for it. Characters you love, big battles, shocking twists and turns… this comic has it all, and if you’re a fan of the DC Universe you will not want to miss it. 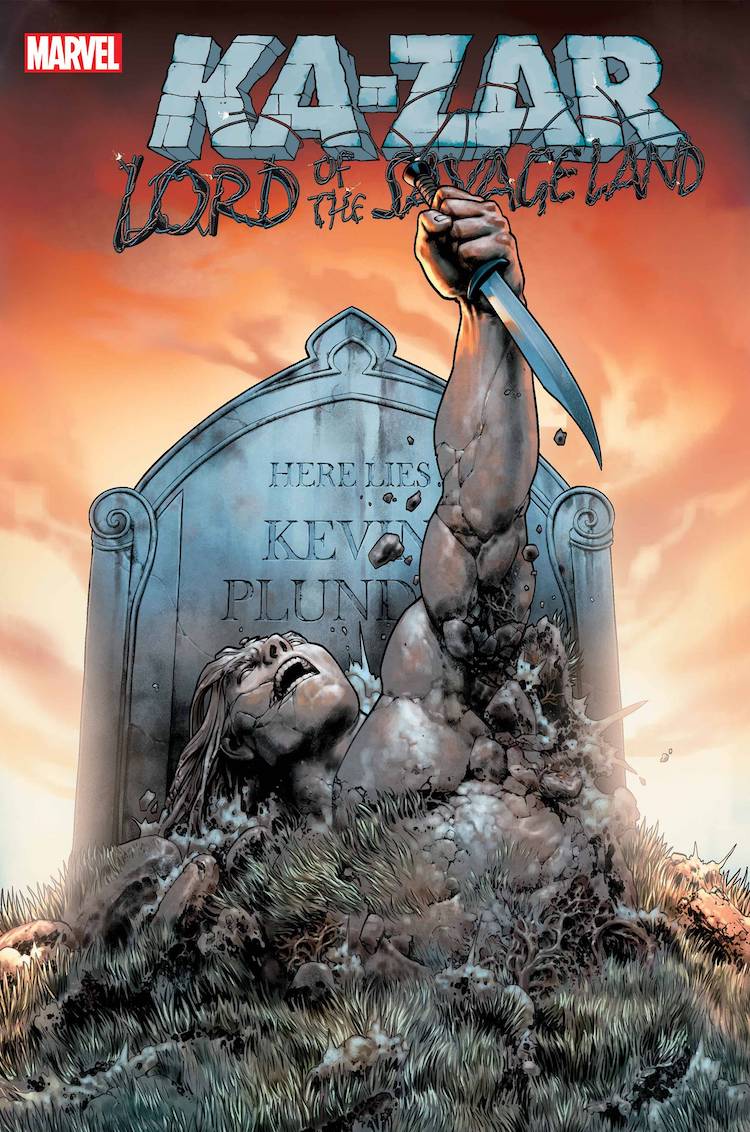 KA-ZAR: LORD OF THE SAVAGE LAND #1
Written by Zac Thompson
Art by Germán Garcia & Matheus Lopes
Published by Marvel Comics – $3.99
You can find it here: Amazon/comiXology

KA-ZAR IS BACK FROM THE DEAD – WITH A WHOLE NEW TERRIFYING SET OF POWERS!

The alien Cotati murdered him. The Savage Land brought him back. Lord Plunder has returned – with a vastly new perspective! Now united with Shanna the She-Devil in a mystical merging of life energies, Ka-Zar has new abilities, new needs…and new enemies. An ancient evil has surfaced in the Savage Land – one that is rapidly reshaping the forgotten world and its inhabitants. Ka-Zar and Shanna must fight together to protect their home and family! But their son Matthew has plans of his own… Don’t miss this spectacular adventure through the lost lands by Zac Thompson and Germán Garcia

Why It’s Hot: Since this column has been on hiatus Zac Thompson has started to really make his mark on the comic book world. Now he joins German Garcia and Matheus Lopes on what could very well be the next great comic from the House Of Ideas. Some of the very best books Marvel has done over the years have come from hungry creators working to elevate characters with potential for greatness. Ka-Zar is a character that fits this mold perfectly, and it’s going to be a blast to see what this creative does with him and his family. 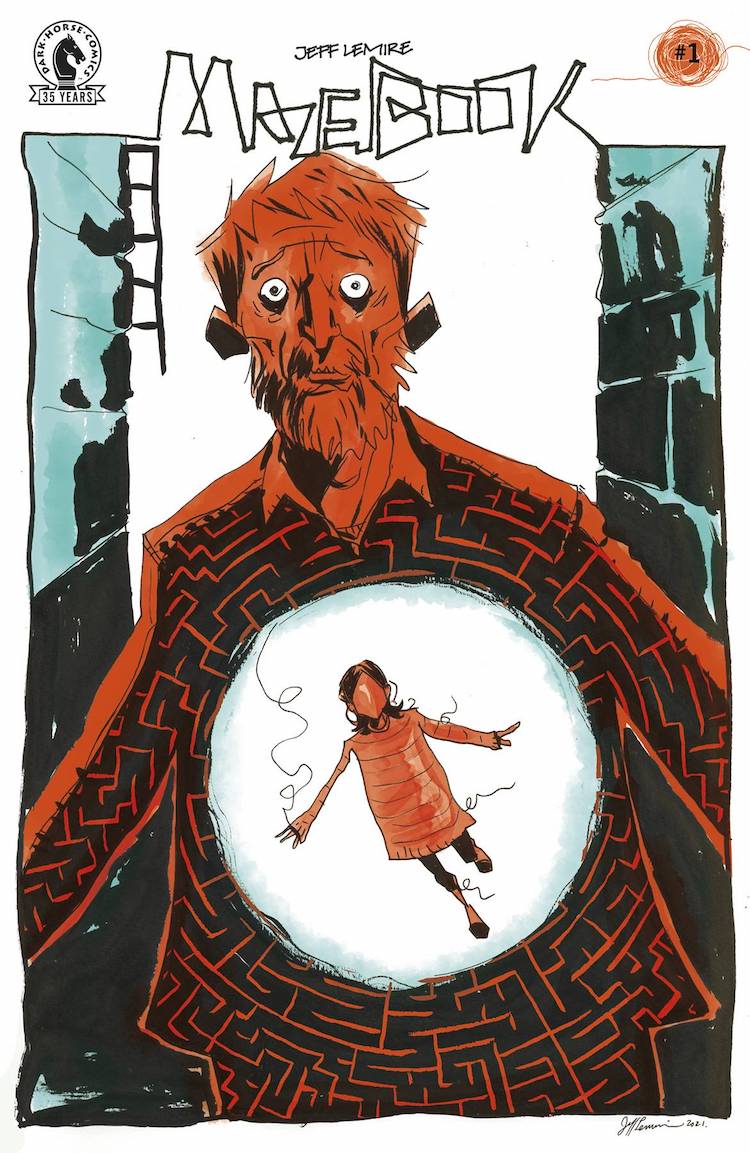 A lonely building inspector still grieving the loss of his puzzle-loving daughter receives a mysterious phone call one night from a girl claiming it’s her and that she’s trapped in the middle of a labyrinth. Convinced that this child is contacting him from beyond this world, he uses an unfinished maze from one of her journals and a map of the city to trace an intricate path through a different plane of reality on an intense and melancholy adventure to bring his daughter back home.

Why It’s Hot: Jeff Lemire, one of this generations greatest comic creators, has a new first issue out this week. ‘Nuff said.