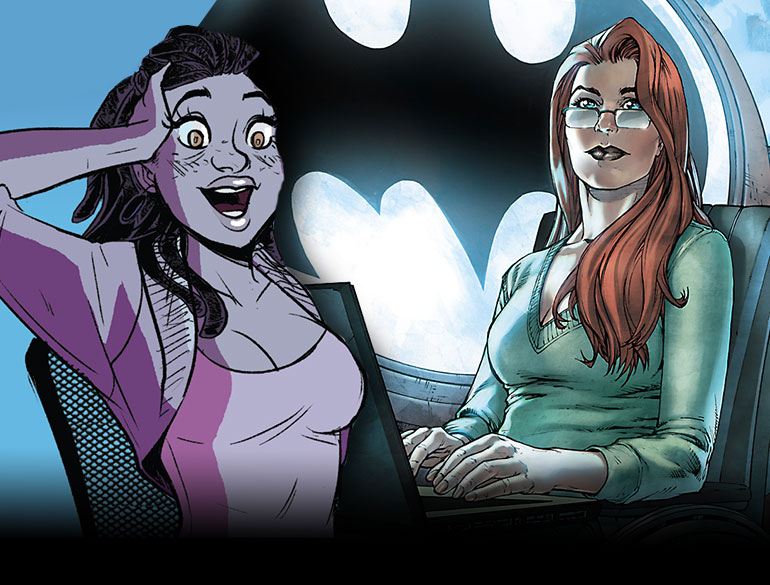 [This column contains SPOILERS for Batgirl #40]

Anyone who’s spent any time talking to me about Barbara Gordon knows that I love her, unapologetically, in all her forms. From my perspective, she is an icon for DC Comics in the same way Superman, Batman, or Wonder Woman is.

Just as The Dark Knight Returns can stand next to Batman: The Animated Series, there’s a malleability to her adventures that lets a book like Gail Simone’s Batgirl co-exist in a world with Chuck Dixon’s Batgirl: Year One — and it’s all still Barbara. She can be dark. She can be light. She’s as brilliant in a library as she is in Kevlar armor.

And she can also be the woman we came to know and love as Oracle. 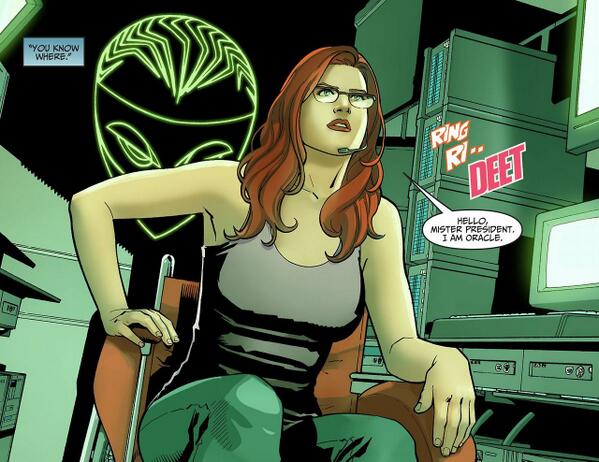 When the New 52 launched, I was immediately, exuberantly happy to see Babs return to the role she had when we first met — that of Batgirl. For 23 years, since the days immediately after Crisis on Infinite Earths, Barbara had never left the limelight, rising to prominence once again as the information broker and super-heroic hacker Oracle, thanks to the contributions of writers John Ostrander and Kim Yale. She was as much a force to be reckoned with — if not more — as Batgirl ever was, and found new a new friendship and bond with fellow Silver Age heroine Black Canary in the pages of Birds of Prey.

Flash forward to 2011, and Barbara Gordon, like many of the denizens of the DC Universe of the New 52, is younger, and returned to the role she had when she first graced television screens on her super-cute motorbike. Batgirl was back, and I couldn’t have been happier.

But that doesn’t mean I couldn’t recognize the loss. 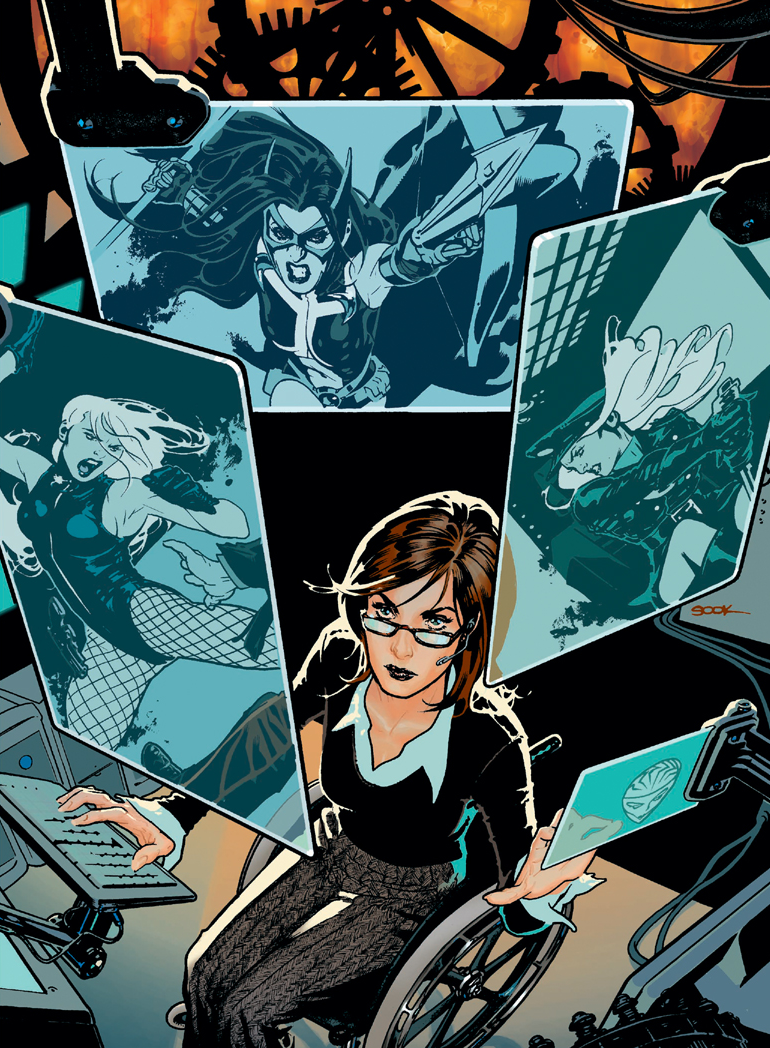 Oracle was not just another identity for a Barbara Gordon who had suffered against those who wished her the most devious of harm, both on the page and off. It wasn’t just a trade-off for her tights and cowl. Oracle was an evolution of characterization, and even more importantly, an evolution of character for the DC Universe (perhaps all comic book universes) as a whole.

Never before (and not really since) has a person with a disability — one that had no other powers to compensate for it — take a leading role and represent so many readers that had gone unrepresented for far too long. Oracle was an inspiration to thousands, someone who never let herself be defined by the concept of “less than” and soared as a heroine even without the use of her legs. I’ve heard countless stories about how much Oracle means to fans, some who were brought into the medium we all love so dearly by Birds of Prey and Oracle’s central role there, and in JLA.

I understood why the decision to return Barbara to the Batgirl role was made, and today, we see that character standing as a role model for an entirely new generation of readers in the same way she was for me as Batgirl in the early 80s, and that she was for readers for over two decades as Oracle. It’s rare that one character can mean so many different things to so many different people, and the degree to which we all hold her dear is extraordinary.

But fans of Oracle lost more than their favorite iteration of Barbara Gordon. People continue to this day to look to Oracle for inspiration as a person with a disability, and have found that version of Barbara to be very rarely represented (Injustice: Gods Among Us still features her, as will the upcoming Convergence crossover). But it’s not like there was a slew of other role models following in her footsteps either. 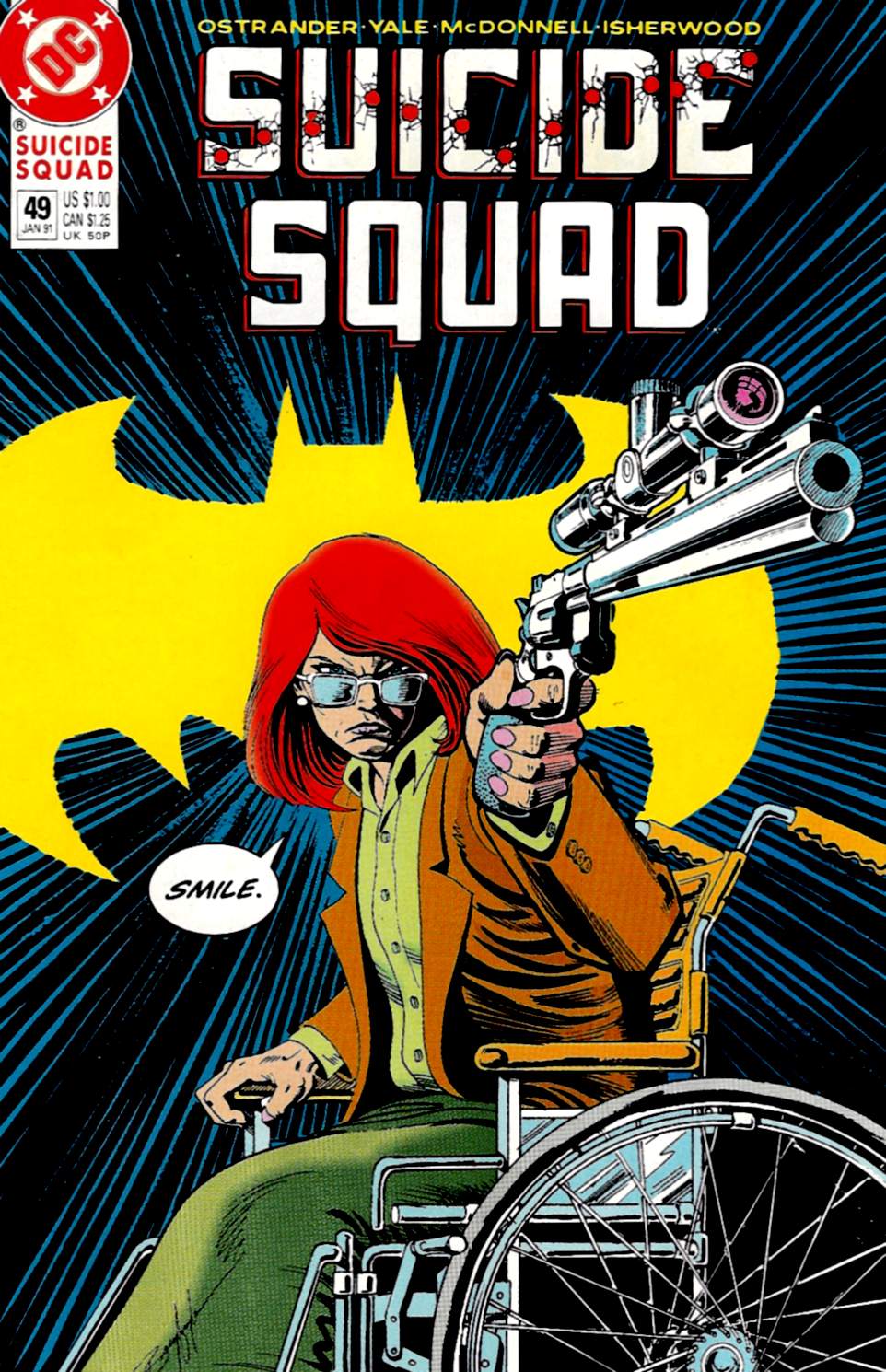 The central dilemma to creating a new Oracle for DC Comics is that there are some tricks you can only pull once. That Barbara Gordon even became the character we knew as Oracle instead of falling away into obscurity the way other Bat-women have over the years was something of a miracle, and owing exclusively to the vision of a husband-wife team that saw the greatness in Barbara’s persona to begin with, and brought her into their Suicide Squad title in order to compensate for what they believed to be a very grievous error in judgment.

But while Ostrander and Yale were in no way responsible for the tragedy that left their newfound character unable to walk, the condition of her disability became so central to the concept of Oracle as to be absolutely inseparable from it. We were always left with the feeling that if Barbara were to regain the use of her legs, she would never be any less smart or talented, but she would return to the togs and hit the streets as Batgirl in a second.

And so she did, briefly exploring the ideas of survivor’s guilt and PTSD in as thorough a manner as her disability was explored as Batgirl. But the cruelty of the act of crippling a woman like Barbara is not something you can justify twice. And so, once that genie of Batgirl’s mobility was let out of the bottle, it’s hard to imagine a way in which this character could develop that fate again without having to take a very long and hard look at the injustice of it all.

In other words, DC lucked out that Ostrander, Yale, Dixon, and Simone gave Barbara such a bright future despite — not because of — the fate that had befallen her. To commit that act again on purpose, to Barbara or anyone else really, is pretty unthinkable in my opinion. 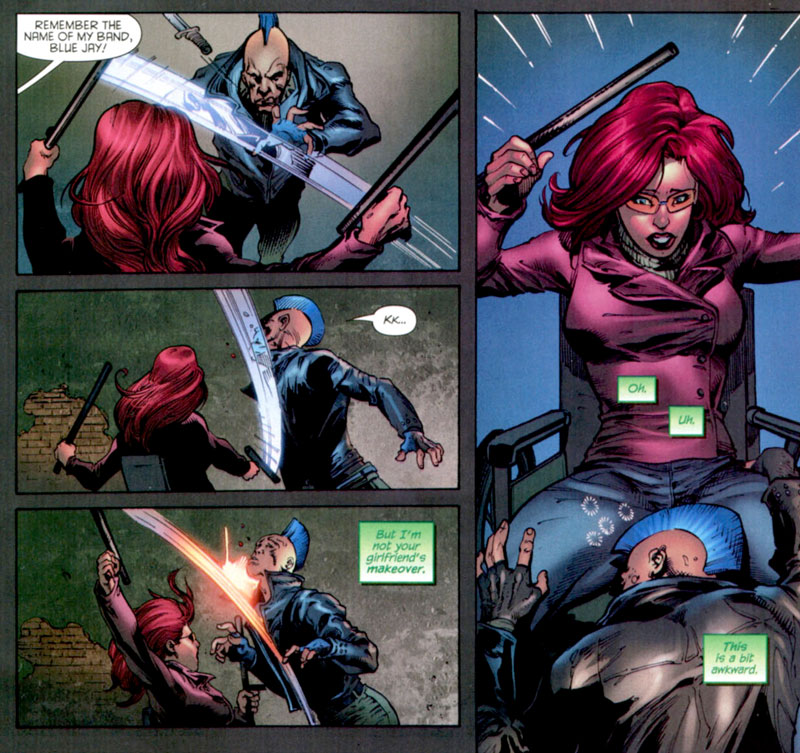 But because the idea of Oracle is so inextricably linked to such an underrepresented population, anyone taking on that role had to have a significant physical issue. Imagine introducing a character into the role who didn’t. It would be a slap in the face to everything she meant to thousands of readers. I adore the character of Felicity Smoak on Arrow, and many fans loved Chloe Sullivan on Smallville. Both have served in an Oracle-esque capacity, but to call either one by that name just isn’t kosher.

So, in my mind, this is the corner DC Comics backed itself into:

Given these factors, I didn’t believe it possible that Oracle could be returned to the pages of a rebooted universe. I’d pretty much written it off, without saying so, knowing that I gained something back at the expense of a sincerely important representation. 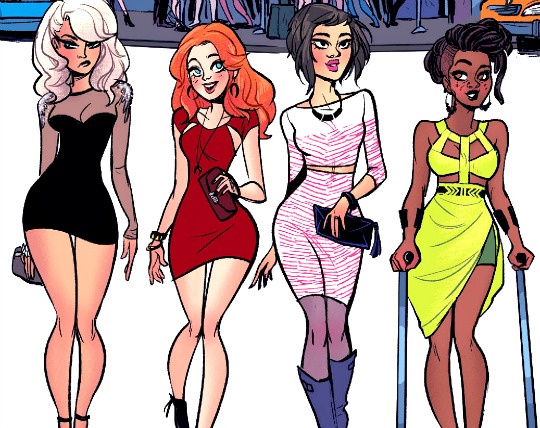 Introduced in Cameron Stewart and Brenden Fletcher’s first Batgirl issue #35, Frankie is Barbara’s new roommate (and old friend) upon her move to Gotham City borough Burnside. Illustrated and colored respectively by the enormous talents Babs Tarr and Maris Wicks, Frankie immediately stood out as outspoken, stylish, brilliant — particularly in her job as app developer — and beautiful. A woman of color in addition to being bisexual, Frankie added another layer of diversity to Barbara Gordon’s experience that helped give the new run a fresh feeling and modern spin.

What wasn’t as apparent immediately was Frankie’s own struggle with muscular dystrophy, a degenerative condition that while not confining her to a wheelchair at 23, would eventually do so. She walks with the aid of crutches most of the time, and met Barbara in college when both were undergoing physical therapy. She also immediately bonded with Babs, not over the fact that they were both in wheelchairs, but because they both had an unbelievable talent for coding and programming. And a great eye for the latest tech. 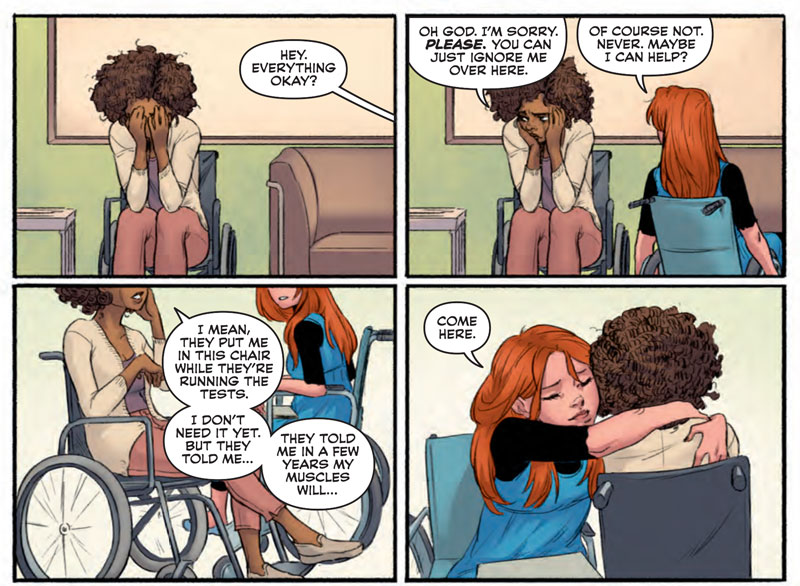 I don’t know why it never occurred to me until I read this week’s Batgirl #40, the final chapter of Stewart and Fletcher’s inaugural story, that DC had found its Oracle.

In retrospect, it’s really perfect. Here’s a character who is defined by so many things and represents such a diverse swath of the readership today, but is also incredibly likable — both to the readers and to Babs herself. Her intelligence and ability is unquestioned. And she, like Alfred Pennyworth to Batman, is a confidante now privy to the secrets of Batgirl, who can be a sounding board for Barbara.

And like Alfred, she is different enough and interesting enough a character to stand on her own, with the potential to be so much more as the years go on, both in-story and without. 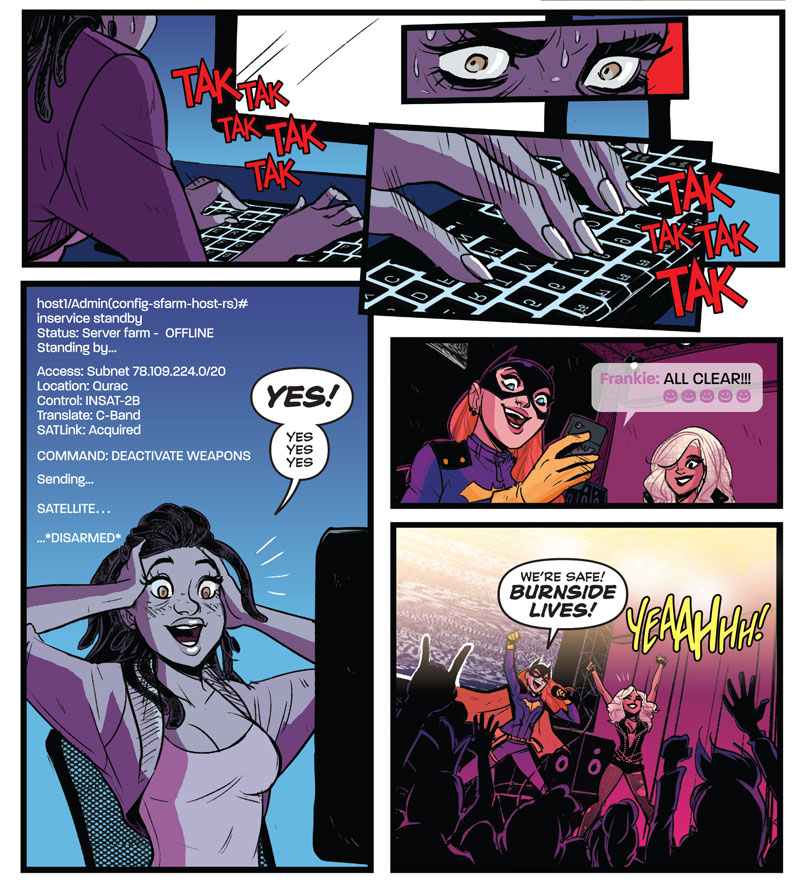 This final story before the Convergence break ends with Frankie being just as responsible for the averting of a crisis as Babs herself, proving her grace under pressure. Ingenuity kicked in when Frankie revealed that she had managed to retrieve Barbara’s algorithm (that brain scan gone wild) and wipe it clean of its malicious code. We are now left with a predictive program, presumably graced with the name Oracle, that Frankie knows as well as its originator does.

And with this adventure comes the desire for more, and a willingness on the part of Batgirl to welcome her other best friend into this small club she and Dinah occupy. Call it the Birds of Prey, or just an expanded friendship, but it seems like the Black Canary may be teaming up with Batgirl AND Oracle once again — for the first time, at the same time!

Could I have predicted this was the path DC and its creators would take to return the concept of Oracle to 2015’s slate of brand new comics? Maybe I should have. With the upcoming returns of Renee Montoya (Detective Comics) and Kate Spencer (Gotham by Midnight), as well as a slew of female-led, person of color-led, and LGBT-led titles debuting or continuing in June, the idea that DC’s premier role for a hero with a disability being left unfilled should have seemed untenable.

But the challenge wasn’t insignificant. Oracle needs to grow organically all over again, this time not out of the ashes of a narrative break, but a metatextual one. Hopefully the fans will see in Frankie the qualities we all — no matter what one’s introduction to our lady of the red hair — admire in Barbara Gordon: genius, friendship, ingenuity, and a sheer determination to never give up.

Oracle has returned. Time to start improving the world a little bit at a time, once again. 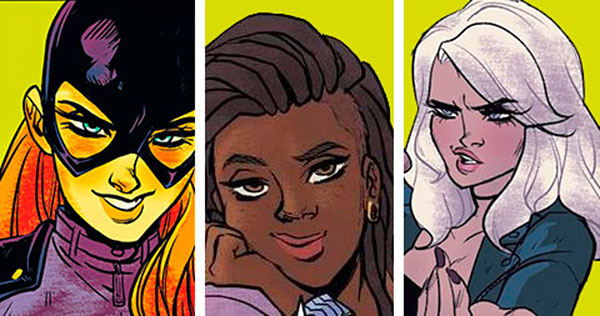 Is this the brand new (but kind of already familiar) Birds of Prey? Time will tell!