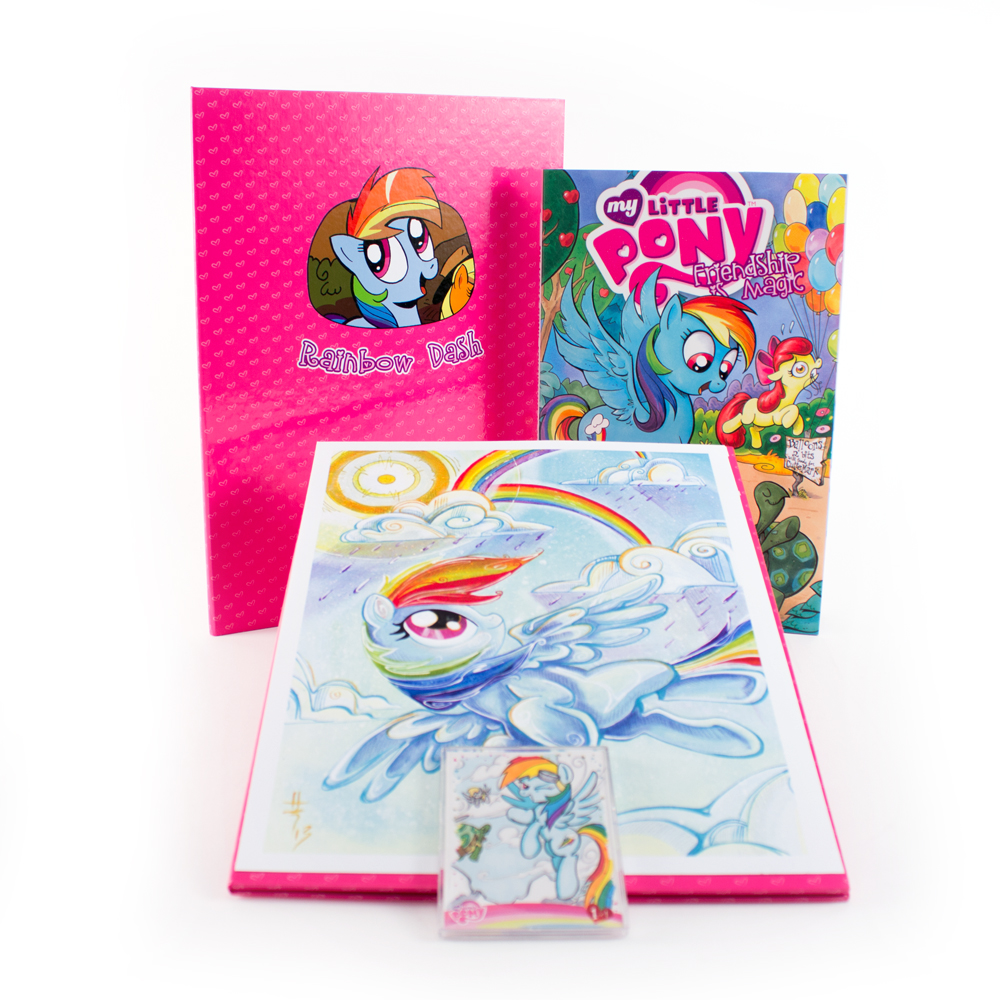 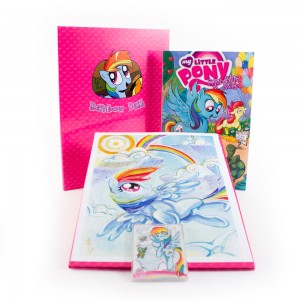 San Diego, CA (August 5th, 2013) – With joy in their hearts, IDW Limited announced plans today for a deluxe hardcover version of MY LITTLE PONY: Friendship Is Magic, Vol. 1. In order to celebrate what is their biggest book project to date, they’re doing something extra

special. The book will be custom designed in six ultra-exclusive variant offerings, one for each member of the hit animated TV series core cast. Starting Monday, the site will begin taking pre-orders on one variation of the book beginning with RAINBOW DASH, and continuing with TWILIGHT SPARKLE on Tuesday, and rounding out the week with FLUTTERSHY, PINKY PIE, APPLEJACK and RARITY.  (www.idwlimited.com/series/mylittlepony)

“Working on the MY LITTLE PONY comics have been an absolute blast!” said series writer Katie Cook. “Each of the ponies has such a distinct voice, they bring their own unique flair and excitement into any storyline. It’s great to see them each get their due with these beautiful IDW Limited books. Andy(Price) and I were happy to sign each one for the fans, because from day one these fans have been amazing, and it felt good to personally touch each of these treasured books so that we’ll always have that connection to each other.”

IDW Limited has examined every detail in the design of this book line. From hand-built color printed tray cases to exclusive covers and vellum overlays, every book will be a magical experience. Presented in three tiers of collectibility, fans will have their choice of the Red Label (limited to 100 books per character) which comes with a hand-drawn sketch card, Black Label (50 per character) which includes a sketch card and a 9” x 12” sketch plate with a hand-drawn illustration from an amazing stable of top talent including current MLP artists Agnes Grabowska and Amy Mebberson, or the Blue Label Edition (just 5 per character) which will come with an 11” x 14” original painting by premier MY LITTLE PONYcover artist Sara Richard!

“This is the biggest book we’ve ever done,” said IDW Limited director Jerry Bennington. “The most art, the most variants and the most custom components. If you’re a fan of Applejack your book is going to reflect that cover to cover. People connect on a deep level with their favorite pony character, and we want to make sure we’re offering something that fosters that connection.”

The MY LITTLE PONY: Friendship Is Magic deluxe hardcover is available for pre-order now. Dash on over to IDWLimited.com to secure your copy now! www.idwlimited.com/series/mylittlepony