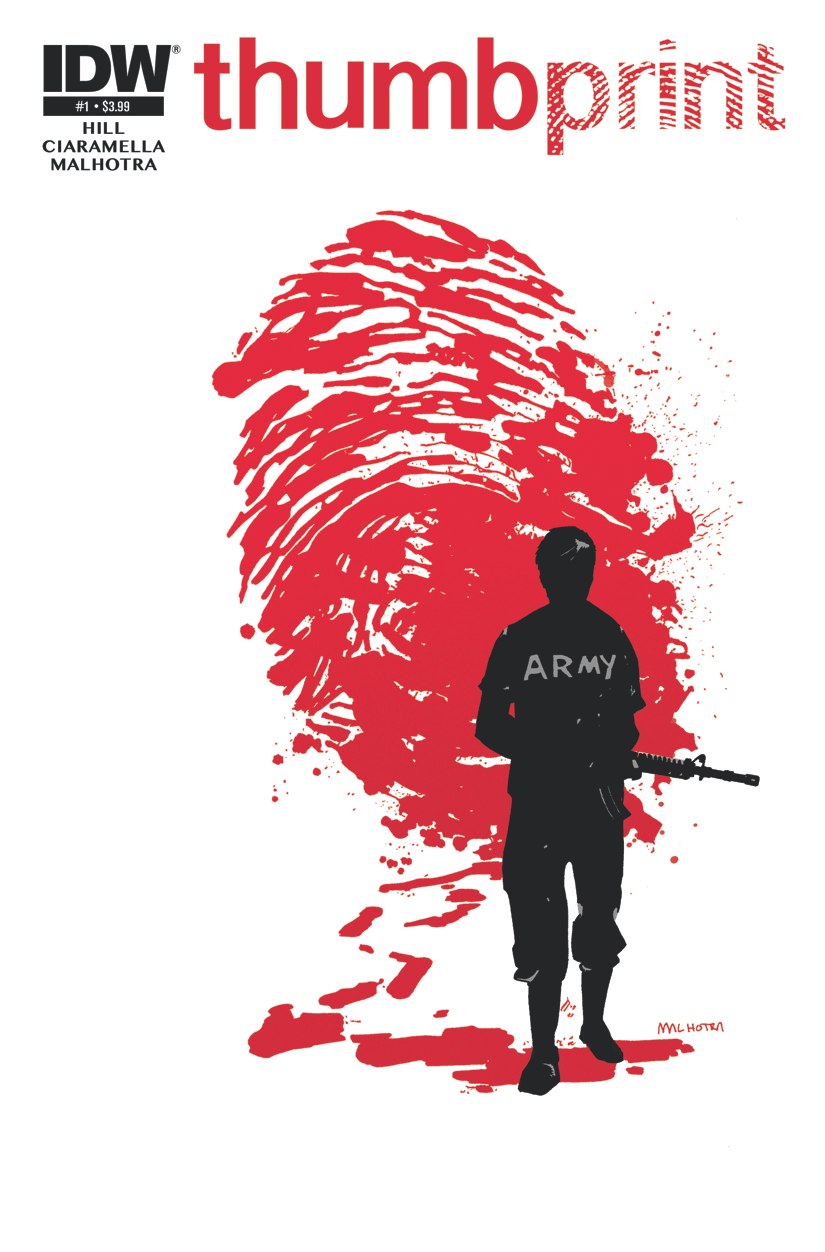 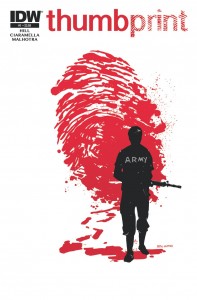 San Diego, CA (March 12, 2013) – IDW is pleased to announce a new project from the Eisner-nominated writing team behind The Cape, Joe Hill and Jason Ciaramella. Based on Hill’s original novella and featuring covers and art by superstar newcomer Vic Malhotra, THUMBPRINT is a twisted three-issue tale of fear, terror, and indelible remorse.

When Private Mallory Grennan is dishonorably discharged from the US Army, she hopes to start a new life back home, far away from the things she’d seen and done in Abu Ghraib prison. Mal’s crimes, committed beneath a harsh Arabian sun, throw a shadow long enough to reach all the way to the United States. What started there, will end here – in blood. Over THUMBPRINT’s three gripping issues, fans will truly feel what it’s like to be haunted… and hunted.

“Bringing THUMBPRINT to life was a challenge for me,” said writerJason Ciaramella. “Not because the prose was particularly difficult to adapt, but because the themes the story explores are haunting, and deeply disturbing. I had to step out of myself in order to capture the true horror of it without letting my personal agendas seep in.”

Author Joe Hill adds, “I was blown away by Jason’s work on The Cape, and wanted more.THUMBPRINT is right in his wheelhouse: Jay has a feel for the psychological flaws that lead a basically good person down the wrong path. And no one writes action quite like Jay – he turns brutality into surreal comedy and back again faster than a magician turning a scarf into a dove. Add to that an opportunity to work with an artist like Vic Malhotra – who draws with a severe grace, and brings to mind the work Mazzucchelli was doing in Batman: Year One – and I think we’ve got all the ingredients for something that can really explode off the page.”

The first issue will also feature a variant cover by Vincent Chong, the award-winning artist of theTHUMBPRINT novella. When THUMBPRINT hits stands this June, fans of the Eisner-winning Locke & Key can expect another in the long line of haunting thrills concocted by Hill and Ciaramella.