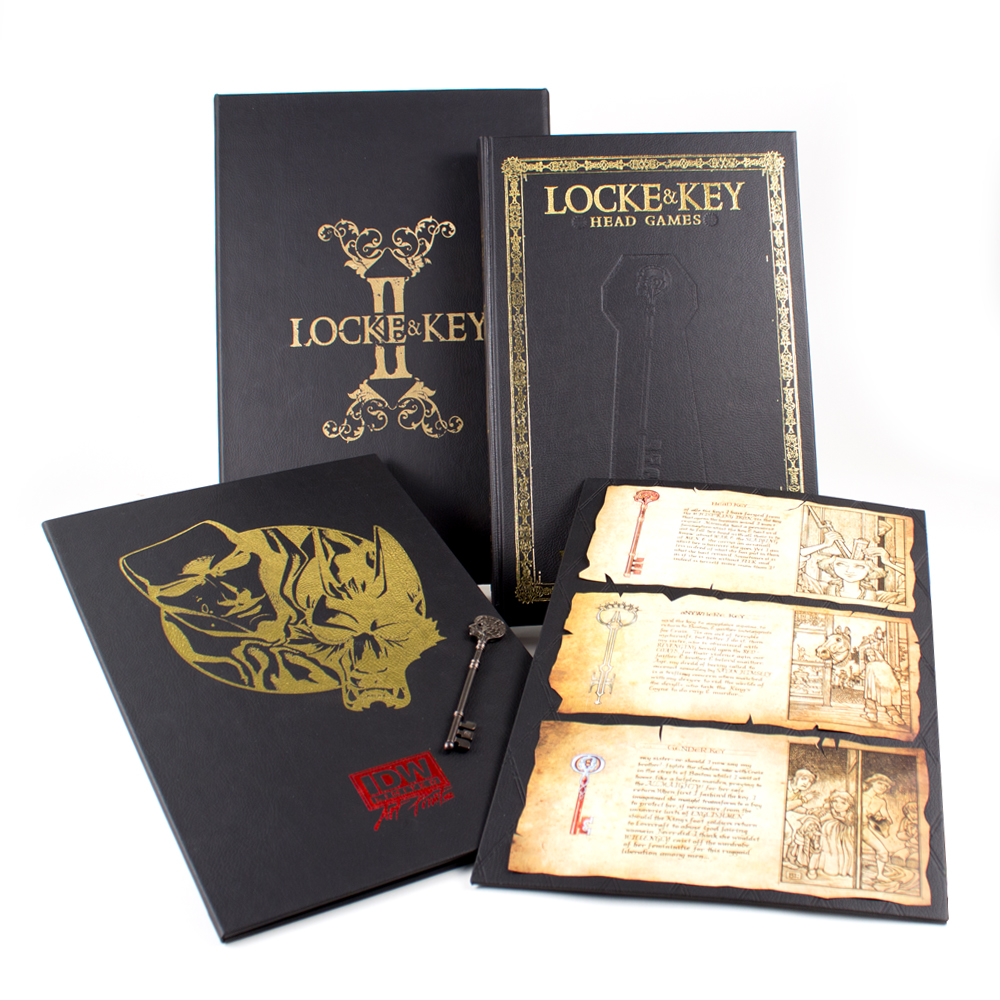 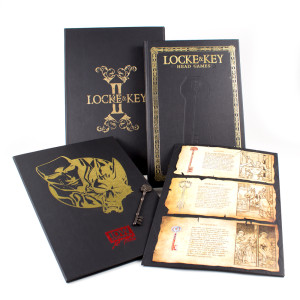 San Diego, CA (December 4th, 2013) The story of Locke & Key may be coming to a close, but IDW Limited is just getting started. Available today from IDWLimited.com, fans can pre-order Locke & Key: Head Games in a new deluxe, limited-edition format (http://idwlimited.com/series/locke-key.html). This oversized hardcover comes packaged in an exclusive tray case and cover only available through this release. Each book is packed with extras, including: an exclusive photo portfolio, a Head or Echo Key produced by Skelton Crew Studios just for this edition, and a secret compartment containing pages from the Locke family journal!

“As a writer, the IDW Limited Head Games is the stuff of daydreams, the kind of thing that seems like couldn’t exist in the real world,” said series writer and creator Joe Hill. “It’s a glorious presentation of Gabriel Rodriguez’s art, wrapped up in a giant, jaw-dropping, heart-breakingly beautiful hardcover. And that doesn’t even get into the extras.”

“It’s both an honor and a pleasure to see what IDW Limited is doing with these special editions of Locke & Key. The series went beyond our wildest dreams,” added Eisner award-winning series artist, Gabe Rodriguez. “To see these books made with such care and love, in this spectacular format, and with contributions from top-of-the-line artists, contributing their own fantastic and beautiful visions of Locke & Key’s mythology is a blessing. I hope readers will enjoy them even more as both Joe and myself are receiving this as a gift.”

Black and Blue Label editions of this limited-edition collection will feature original art from an impressive group of artists, including David Petersen, Langdon Foss, Alan Robinson, and Jim Mahfood. Black Label books (10 copies available per artist) will feature artists working on a sketch plate with a background by Gabriel Rodriguez, while Blue Label books (3 copies per artist) will come with a cover interpretation by the guest artist.

“Locke & Key has been a triumph of masterful storytelling on the part of Joe Hill and amazing visuals by Gabriel Rodriguez,” said IDW Chief Creative Officer/Editor-in-Chief and Locke & Key Editor Chris Ryall. “So for us to offer an IDW Limited edition of Locke & Key with art by someone other than Gabe, who has been the sole artist on the series for its entire run, we wanted to make sure we had a stellar line-up in place. And it’s been a blast to see these characters and the world Gabe’s created come to visual life in other talented artists’ hands. Add to that the deluxe package created around the art and it’s a great showpiece for passionate Locke & Key fans.”