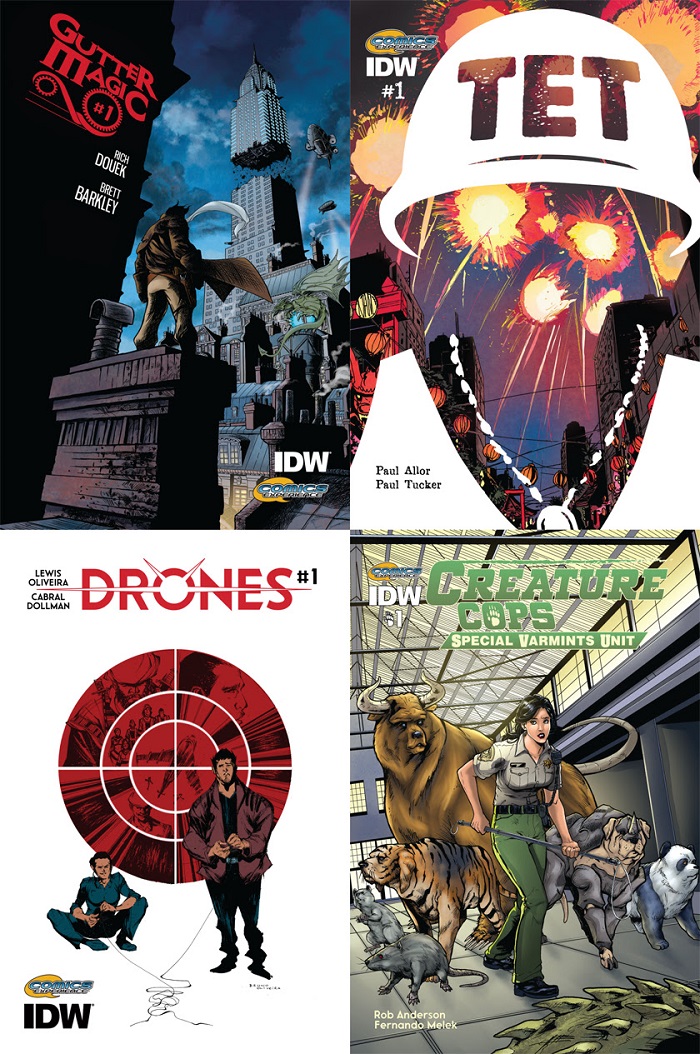 The mini-series announced today, the first of which launches in January 2015, include:
Drones by Chris Lewis and Bruno Oliveira, the story of two Predator drone operators on a bizarre journey that will take them to a terrorism-themed hotel in Las Vegas, in a war where terror and entertainment have begun to blur.

Creature Cops: Special Varmint Unit by Rob Anderson and Fernando Melek, about animal control officers in a near-future city who must deal with patchwork, hybrid animals, from gator-snakes to panda dogs.
Gutter Magic by Rich Douek and Brett Barkley, set in a world where World War II was fought with magic, and the heir to a powerful magical dynasty can’t cast a spell to save his life.
Tet by Paul Allor and Paul Tucker, is a story of hard-boiled crime and star-crossed romance, set at the height of the Vietnam War and the decades that followed.
IDW Editor-In-Chief and CCO Chris Ryall said, “IDW has been a strong supporter of creator-owned comics, from our very first title, 30 Days of Night, through to Locke & Key and beyond. We’re now excited to be partnering with Comics Experience to introduce the next wave of new talent to fans and the industry.”

Comics Experience President and CEO Andy Schmidt explained, “These are up-and-coming creators with properties developed in the ‘talent incubator’ of our online community. With this deal, we’re offering an opportunity for these creators and others like them to reach a broader audience with their diverse books.”