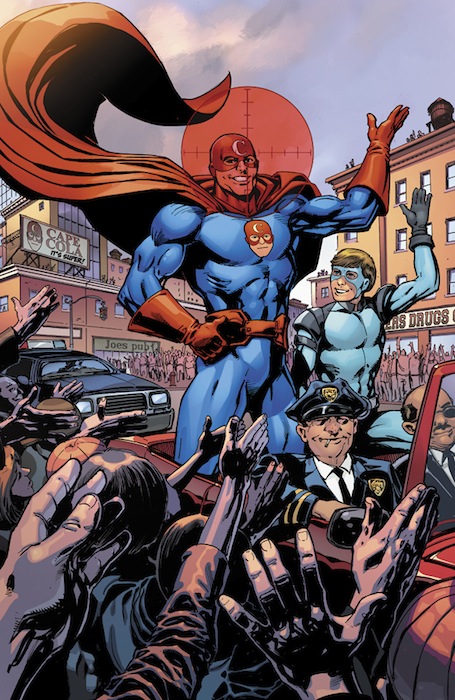 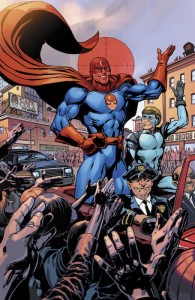 For three years, flying, nigh-invulnerable teenager Barry Chase was Flyboy, sidekick to the imagination-impaired but crime-fighting master The Red Cowl, and all was well, though Flyboy was the butt of a lot of jokes. Together, The Red Cowl and Flyboy brought peace to Sol City, fighting for truth, justice and some third goal that the Red Cowl could never quite put his finger on but was sure he’d figure out in time. But then the Red Cowl was defeated and killed — some say by the villain Terraform, others by one of the Moonglow sisters — and Flyboy was left on his own. It is at this point that SIDEKICK, the latest J. Michael Straczynski comic from Image Comics, begins.

The first issue of the second title from Joe’s Comics to be published by Image (TEN GRAND debuted in May to presales of nearly 70,000 copies), SIDEKICK, will be in stores on August 7 and is drawn by Tom Mandrake and Brian Miller, with a limited-edition variant cover by Charlie Adlard (THE WALKING DEAD) that will debut at San Diego Comic-Con, taking place on July 17 – 21.

SIDEKICK tells the story of nineteen-year old Barry, a.k.a, Flyboy, in the aftermath of his mentor’s death and his decision to continue his crime-fighting career, even though no one takes him seriously — not the good guys, not the bad guys, nobody. Any attempt Flyboy makes to improve his image backfires, and soon, unloved and unsupported, he descends into darkness.

“Sidekick is designed to turn the usual superhero tropes upside down,” said writer Straczynski. “Flyboy’s gradual disintegration into madness and crime is fueled by his desperate need for approval. His downward spiral slowly drives him to the dark side of the law, where he begins an affair with the villainous Moonglow Twins, who one night whisper something to him about the fate of his mentor that he could never have imagined possible. That secret may be the key to Flyboy’s redemption, or his damnation, giving him something to live for… and maybe, just maybe, something to kill for.

“Having worked extensively in the world of mainstream superhero comics for the last decade-plus, you are subtly informed that there are all these things that you can’t do to your main character, all these accepted rules for guys in spandex. The fun in Sidekick is in doing every one of those things that you’re never supposed to do. We’re going to spend a lot of time just beating the crap out of Flyboy until he finally snaps…and then the fun really begins.”

SIDEKICK #1 will be in comic book stores on August 7, and a special, exclusive edition will be available in limited quantities at Comic-Con International in San Diego from July 18-21, where Straczynski will be a special guest of Image Comics. It can be pre-ordered now from the June issue of Previews.