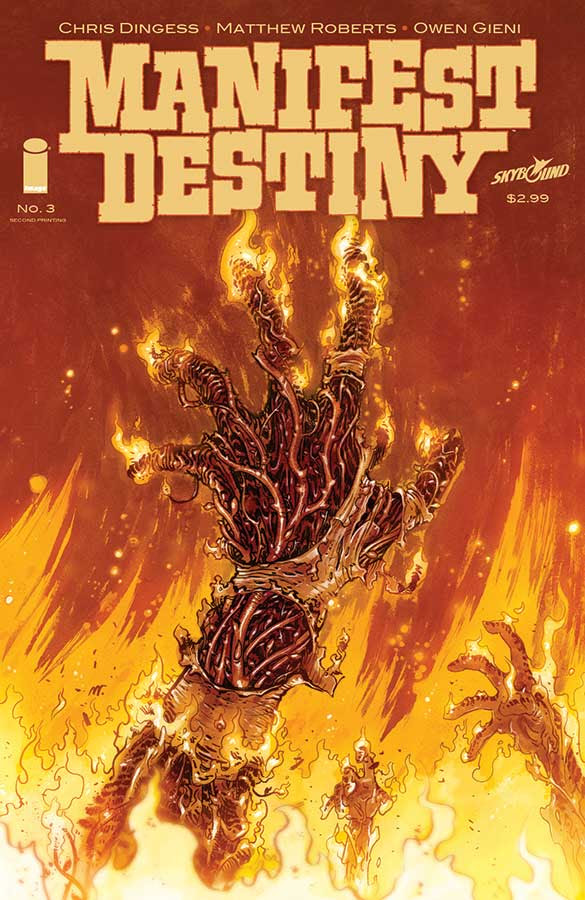 Image Comics has announced a second printing for the sold out Manifest Destiny #3. 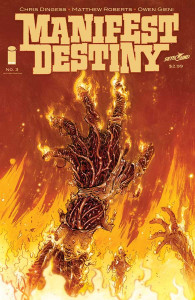 The third issue of Skybound’s MANIFEST DESTINY, created by Chris Dingess (Being Human) and Matt Roberts (BATTLE POPE), has sold out instantly at the distributor level, the third consecutive sell-out for this hit series! Readers and critics flock to the lush and mysterious escapades of Lewis and Clark reimagined.

Praise for MANIFEST DESTINY:
“Historical fiction can be a gamble in comics… By keeping it weird and focusing on their characters, Dingess and Roberts make a great case for how well it can work.”
—Marykate Jasper, Comic Book Resources

“Manifest Destiny #1 promises to be some really solid storytelling, focusing on a time when the world was still a mystery to those who thought themselves above it, and a world which too often valued the pioneer spirit above basic human decency.”
—Andy Hunsaker, Crave Online

“Dingess and Roberts have done a terrific job here, establishing the ugly side as well as the wonder of this expedition to the West. Manifest Destiny is looking to be one revelatory journey.”
—Michelle White, Multiversity Comics

“Salvation lies west, and Manifest Destiny is proof—taking a smart spin on otherwise barren narrative territory, Chris Dingess, Matthew Roberts and Owen Gieni have produced an opening issue that will pique your interest and get you invested in our heroes. This is the kind of trailblazing you won’t want to miss.”
—David Pepose, Newsarama

“An enjoyable start, Manifest Destiny #1 delivers two engaging protagonists that readers will root for. I want to see what monsters show up during this exploration into the American frontier.”
—Jorge Solis, Bloody Disgusting

“It is way too early to start making best comics of the year lists, but we can safely put Manifest Destiny on the contenders list at least. As a history buff and a lover of all things weird, kooky, and slightly off kilter, I can’t recommend Manifest Destiny enough.”
—Cody Ferrell, Comic Book Therapy

“If you are looking for a title that is a little bit different, yet full of adventure, excitement, and some elements of horror with stunningly beautiful artwork and writing, then this one is right up your alley.”
—James Anders, Comic Bastards

MANIFEST DESTINY #3 has completely sold out at the distributor level, but may still be available in comic stores, and is currently available digitally on the Image Comics website (imagecomics.com) and the official Image Comics iOS app, as well as on Comixology on the web (comixology.com), iOS, Android, and Google Play.

Image Comics is pleased to announce that this issue will be going back to print to meet customer demand. The second printing of MANIFEST DESTINY #3 (Diamond Code DEC138029) will release on 2/12/2014.