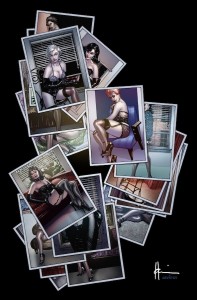 The first printing of SATELLITE SAM, the acclaimed new Image Comics series by Matt Fraction and Howard Chaykin, has sold out and immediately gone back to press for a second printing due in stores on August 7.

“Secrets and lies — particularly of the darkly sexual variety — never go out of style,” said Chaykin, “whether it’s the seamed hosed and merry-widowed world of the 1950s or the cut to the navel microskirts and stiletto pumps of 2013.”

The first issue of SATELLITE SAM was released on July 3 to considerable praise:

“The strength of the writer’s storyline deserves kudos both for its intrigue and period setting, but also for its ability to bring out the absolute best of one of the industry’s most talented and innovative artists. By publishing Satellite Sam, Image Comics showcases an excellent example of its charter by giving the industry’s best talent the opportunity to create their best work.”
– Comic Book Resources (4.5-star review)

“Fraction’s dialogue is quippy — almost Sorkin-esque — and perfectly period, and it meshes with Chaykin’s bold, expressive, retro art like a well-stirred martini. The murder mystery is icing on the cake.”
– Comic Vine (5-star review)

The second printing of SATELLITE SAM #1 is available for pre-order now (Diamond code MAY138256). It will be in stores the same day as SATELLITE SAM #2, August 7.