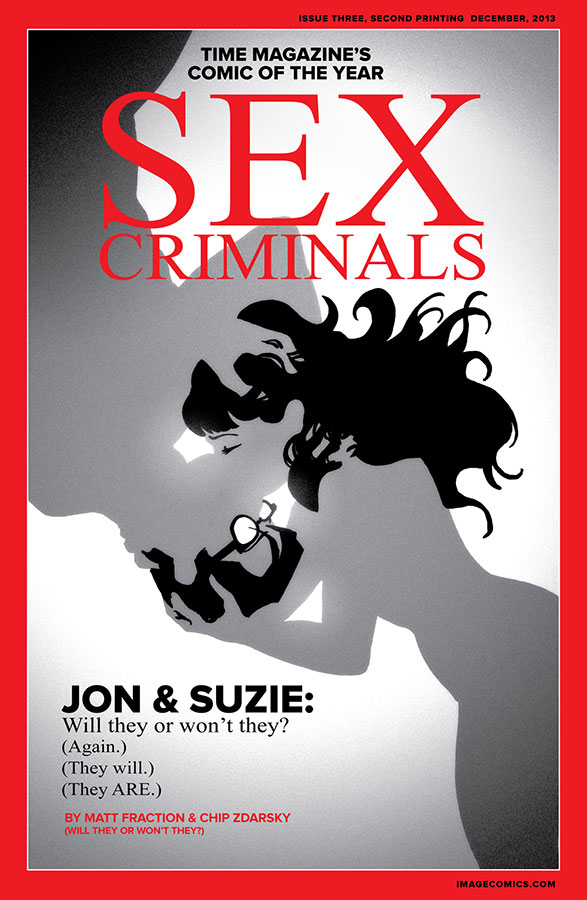 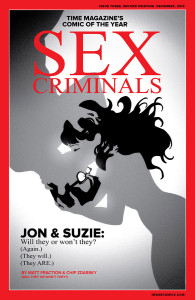 The third issue of the wildly popular series SEX CRIMINALS, created by Matt Fraction (SATELLITE SAM, Hawkeye) and Chip Zdarsky (Prison Funnies), has sold out at the distributor level. Critics and readers alike have flocked to the fresh new series that Time magazine dubbed the #1 comic series of 2013 and actor Wil Wheaton calls “one of the best things I’ve ever read, period.”

Praise for SEX CRIMINALS:
“This R-rated romp (about a bank-robbing couple whose orgasms can stop time) is his best work yet.” –Douglas Wolk, Time magazine

“It’s the kind of story that isn’t being told anywhere else in comics, and the perfect read for anyone looking for a captivating, unique title by two creators at the top of their game.” –Oliver Sava, A.V. Club

“They have given us a wildly original, wholly engaging delightful comic that keeps us howling just as much as it keeps us feeling.” –Justin Partridge III, Newsarama

“Easily my most anticipated book every month. Don’t wait any longer and pick it up ASAP. You wont regret it.” –Jimbus_Christ, Bloody Disgusting

“Sex Criminals is one of the least predictable–and most entertaining–series in print right now.” –Jen ‘Miss J’ Aprahamian, Comic Vine

“The tone is one of my favorite things about the series so far… I’m excited for the next issue, and I hope it stays as wacky as the first three.” –Marykate Jasper, Comic Book Resources

SEX CRIMINALS #3 has completely sold out at the distributor level, but may still be available in comic stores, and is currently available digitally on the Image Comics website (imagecomics.com) and the official Image Comics iOS app, as well as on Comixology on the web (comixology.com), iOS, Android, and Google Play.

Image Comics is pleased to announce that this third issue will be going back to print to meet customer demand. The second printing of SEX CRIMINALS #3 (Diamond Code OCT138244) will release on 1/8.

SEX CRIMINALS #4 releases 1/8 and will be available for pre-order with Diamond Code OCT130623.