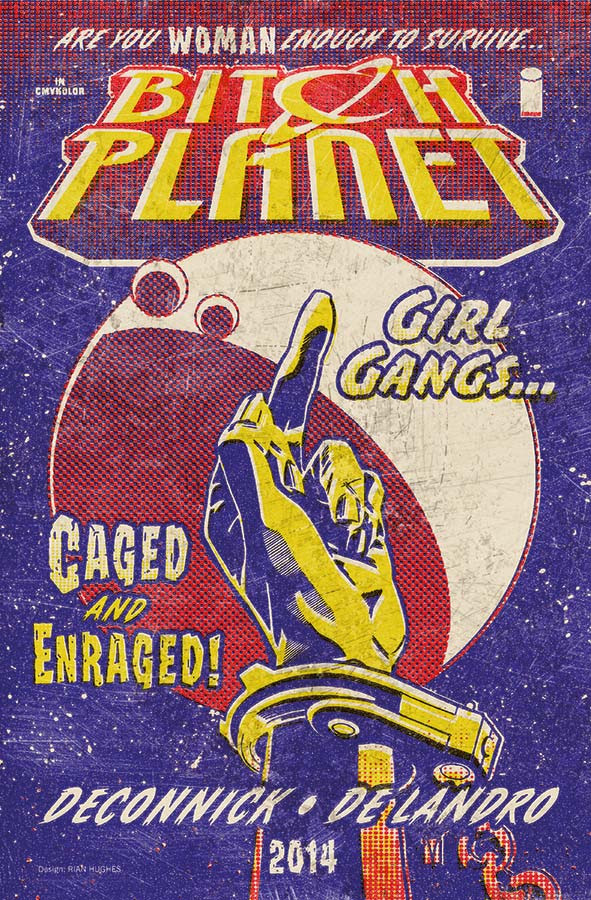 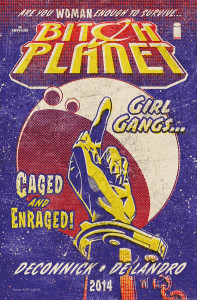 In 2014, Kelly Sue DeConnick (PRETTY DEADLY, Captain Marvel, Avengers Assemble) and artist Valentine De Landro (X-Factor) are bringing the Women in Prison trope to outer space in BITCH PLANET. Sure to be a campy, kick-ass adventure, BITCH PLANET is the story of five leading ladies ready to bust out of their prison cells.

DeConnick admitted the tricky dilemma she set up for herself in wanting to work with the Women in Prison trope but still honor feminism. “I have a profound and abiding love for exploitation films, but as a feminist, I also find many (if not most) of them deeply problematic—for reasons that are both obvious and that I can’t expound on without sounding like an academic paper,” said DeConnick. “These are two WILDLY mixed feelings. And I love mixed feelings. It happens that mixed feelings are the perfect soil composition for fiction.”

“Kelly Sue pretty much sold me on this with the title. It’s called Bitch Planet—how can you not love that?” said Eric Stephenson, Publisher at Image Comics. “But seriously, it’s a true pleasure to have Kelly Sue working on a second title at Image, and even better that she’s doing it with Valentine De Landro. Mark my words, this is your new favorite comic.”

A science-fiction take on the Women in Prison exploitation feature, BITCH PLANET follows five prisoners on an all-female penal planet, ready to make their escape by way of a gladiatorial exhibition against a team of visiting male prisoners. DeConnick summed BITCH PLANET up with, “there are five women, all ridiculous and real, and all very different. One shouldn’t be there. The other four are unrepentant and guilty as Hell.”