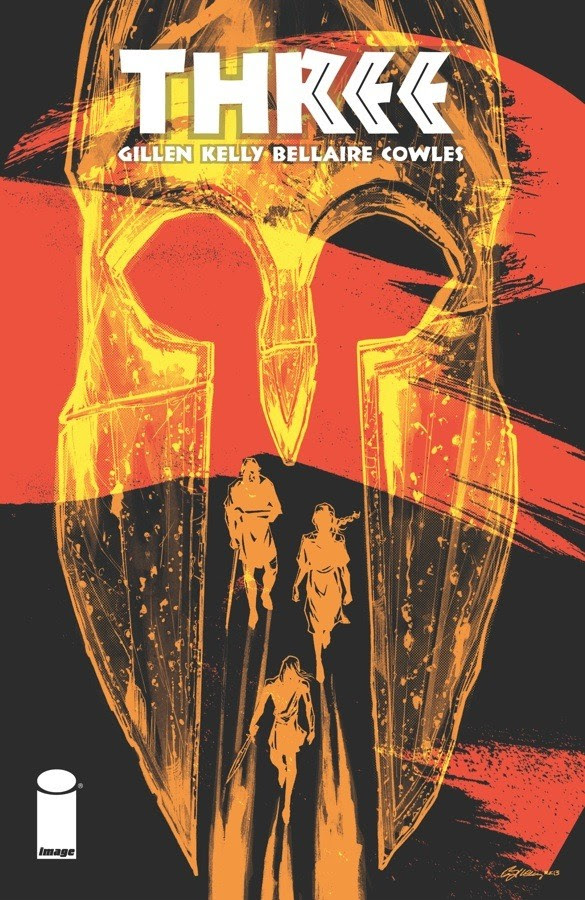 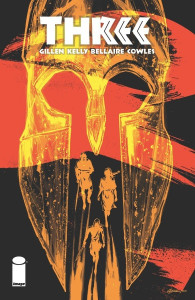 Nearly one hundred and twenty years after the 300 held off the mighty Persian empire at Thermopylae, three helot slaves do the unthinkable: In one blood-soaked night, they rebel against their Spartan masters. Three helot survivors — Klaros, Demar, and Terpander, the eponymous three of the April Image Comics graphic novel THREE by Kieron Gillen and Ryan Kelly — survive the slaughter and run. To save the reputation of Sparta, three hundred warriors set out to capture and kill them. The desperate helots and their determined, brutal pursuers leave a trail of blood across Greece.

Writer Gillen (PHONOGRAM, Young Avengers) and artist Kelly (Lucifer, Local) consulted with Professor Stephen Hodkinson from the University of Nottingham to accurately capture an era of Spartan history when the city-state’s power was waning. The graphic novel includes an interview with Hodkinson, as well as annotations. However, just as important as historical accuracy in THREE is emotional truth. With heavy inks and earthy colors splashed with red by colorist Jordie Bellaire depicting this story of violence, tyranny, and freedom, THREE is a work of intensity and humanity.

“[A]s a writer, you reach a point where you feel you have to write,” said Gillen of his research process in an interview at Comic Book Resources. “You immerse yourself in the world to a point, and then are basically pregnant with it.”

THREE collects the five-issue miniseries published by Image Comics in October 2013 through February 2014. It will be in comic book stores on April 9 and bookstores on April 22.

“The real reason you should pick up this book, aside from Gillen’s writing and Kelly’s art, is because it is a tribute to a long-forgotten people. “Three” is a rebellion against the swallowing void of history by way of enlightenment.”
– James Johnston, Multiversity Comics

“[it’s] a story that its creators believe in, a brutal action story with a meaningful core, a response to a familiar tale that they hope will take you somewhere unfamiliar and leave you enjoying the ride, and maybe doing some rethinking of the myths you’re comfortable with.”
– Sarah Jaffe, Comics Alliance

“Beneath this visual finery is the foundation that is Gillen’s work, made solid by extensive research and passion that’s unshakably part of every step the story takes and every word uttered by its players. Gillen cares about these helots, and so shall his readers, endeared by their strength in the face of certain death, their defiance, their humor, their history. Likewise, Gillen inspires hatred and frustration with his villain, wielding fate that is as cruel and stupid as life – and history – has always been.”
– MJ Feuerborn, Comicosity

“I’ve read many series with a great sense of movement — fluidity, drive, etc. — but few that have “Three’s” sense of moment. It moves like a drumbeat. Nothing flows quickly from one panel to the next; rather, each panel is a strong, distinct beat. It makes for heavy storytelling, amplifying the dread or importance of every action.”
– Marykate Jasper, Comic Book Resources