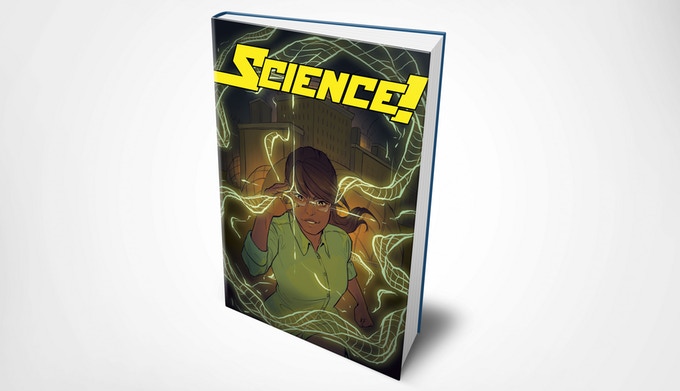 Los Angeles, CA – September 12, 2018. Husband and wife team, and creators of Jupiter Jet: Jason Inman (“Love is Love”, “DC All-Access”), and Ashley Victoria Robinson (“Apollo IX #1”, “Witchblade #175”), and artist: School of Visual Art graduate, Dez Pittman (known for her convention-favorite Zombie Portraits), have teamed up with Eisner-nominated Canadian published Beside Press (“The Secret Loves of Geek Girls”, “Enough Space for Everyone Else”), to create an 80 page Original Graphic Novel. Science! stars a teenage girl who is smarter than anyone reading the book, the science school she wants to tear down from the inside, and the cute roommate she is going to tear the fabric of space and time with!

“Science!” is the story of Tamsin Kuhn Trakroo, a fourteen-year-old girl who has just started studying at The Prometheus Institute. Like any school, Prometheus has it’s pros and cons:

Pro:
Tamsin’s cute roommate, Garyn.
Good friends that can help you.
Prometheus is the world’s most famous and prestigious science school!
Tamsin is in the perfect position to get revenge.
Con:
Garyn wants Tamsin to help her harness a dangerous power source with the potential to kill them all!
One of them will blow up the school with his rocket fuel.
It’s headmaster is Lucan Laveran.
She’s guided by her dead father’s consciousness that lives inside her glasses and … well … he has a habit for reminding her of just that fact at the most inopportune moments.

When Harry Potter meets Star Trek all wrapped up in a comic book package you get “Science!” this coming-of-age science fiction adventure will challenge your knowledge of space and time (all delivered through the mouths of an army of adorable helper-robots named Scientific & Technological Assistant Teachers or S.T.A.T.s), celebrate everything good and bad that comes with your first love, and leave you feeling smarter, happier – and maybe like you could build yourself a working pair of rocket boots!

Perfect for readers of all ages, but especially those who are fans of: Invincible Iron Man: Ironheart, Batgirl and the Birds of Prey, and Big Hero 6.

“A book about cosmic world changing science adventures has always been a dream. Couching that idea amongst a school full of angsty teenagers and floating robots made the idea even better. The book has always been about science, so of course, we couldn’t call it anything else.” Inman says.

“Science!” came to life in 2016 while walking in a park. Inman shared the basis of his idea with Robinson and together they jumped right in – naming characters, developing relationships, and brainstorming influences they wanted to glean inspiration from.

“I loved the idea right off the bat of a science adventure starring a group of young women,” says Robinson, “Figuring out what everyone’s specialty was going to be and how that would serve obstacles in the overall plot made me instantly want to dive right in!”

Dez Pittman is providing pencils and inks after tabling next to Inman and Robinson at Wizard World Portland and forging such a strong bond that they knew they would soon be working together. Becka Kinzie (“Cadaverific!”, “Gehenna: Death Valley”), is coloring and Ghost Glyph Studio’s Taylor Esposito (“Constantine”, “New Suicide Squad”), will letter.

The plan is produce an 80 page original graphic novel that will be released directly through Bedside Press.

“We are beyond excited to be working with Bedside Press,” says Robinson. “I’ve been a fan of Hope Nicholson for years and, as a fellow Canadian, have been looking for an opportunity to collaborate with her. She has such a diverse catalogue and I’m so proud that Science! will be joining!”

Kickstarter backers can pre-order the original graphic novel during an exclusive window before the books with a cover by Becca Farrow (“JEM and the Holograms”, “Lady Castle”, “WWE”) are sold to general public and they come with an exclusive print by Ryan Sands (star of Marvel’s Runaways), and Brent Schoonover (“Astonishing Ant-Man”, “Captain Marvel”, “The Punisher”), that will not be sold anywhere else. There is also the opportunity for backers to purchased signed copies of the book as well.

The Kickstarter launches Wednesday, September 12 and will conclude in 30 days. www.sciencecomicbook.com will take you directly to the campaign.

Jason Inman is a farm boy from Kansas, and since he now thrives in the superhero universe, it’s no wonder why Jason Inman is often mistaken as the last son of Krypton. His comic book writing has been featured in projects published by DC Comics/IDW, Action Lab Comics, Alterna Comics, and Not Forgotten Comics. He just finished co-writing Jupiter Jet, a five issue mini-series published by Action Lab Entertainment. Plus, his podcast, Geek History Lesson, a weekly show that explores the secret histories of everyone’s favorite pop culture characters, and various other weekly reaction and recap videos, can all be found on Jason’s YouTube Channel, www.youtube.com/Jawiin which has over 13 million views.
Jason is a frequent guest on Collider Movie Talk and hosted DC ALL ACCESS, the show that brings you all the latest announcements from the world of DC, for 4 years. Also, Jason hosted special features for Warner Bros on the Batman v Superman and Suicide Squad Blu-rays.

Ashley Victoria Robinson is a Canadian hobbit now living in the United States. Her comic book writings have been published through DC Comics/IDW, Top Cow, Action Lab Comics, Alterna Comics, Not Forgotten Comics and Colonial Comics. She is the host of the Geek History Lesson podcast (alongside Jason), any number of shows for the youtube channels including: Jawiin, Nerd Alert, Geek Bomb, Collider, Screen Junkies, DC All-Access, Comicbook.com, Geek & Sundry, Hyper RPG, Major Spoilers and many more. She is the co-creator of Jupiter Jet and The Red Shirt Diaries and has been featured in several international commercial campaigns including Intel alongside The Big Bang Theory’s Jim Parsons. Follow her antics on Twitter & Instagram @AshleyVRobinson

Dez Pittman Hello there!  My name is Desiree’ Pittman, Dez for short.  Growing up, I just wanted to create art all the time.  In 2001, I attended the School of Visual Arts in Manhattan where I studied cartooning and illustration and later graduated in 2005 with a BFA.

I currently reside in Portland, Oregon with my amazing husband, Jason, who is also a very talented artist.  On top of doing my own projects, I enjoy commission work and collaborations.  You’re most likely to see me at a Convention drawing Zombie Portraits and selling prints of my illustration work.

And just in case you wanted to know, I love food.  Food is pretty awesome.  And ice-cream, MAN do I love ice-cream.

Becka Kinzie is a freelance artist and colourist from Ontario, Canada. Some of her colouring work has been featured in comics such as Hacktivist (vol. 2), and the Gothic Tales of Haunted Love anthology. When not colouring, she’s drawing her own horror/darkly inclined comics and art. She’s currently working on her horror/sci-fi webcomic, which can be found on her website at thebecka.com.

Taylor Esposito is a comic book lettering professional and owner of Ghost Glyph Studios. As a staff letterer at DC, he lettered titles such as Red Hood and The Outlaws, Constantine, Bodies, CMYK, The New 52: Future’s End, and New Suicide Squad. Prior to this, Taylor was credited on numerous titles for Marvel as a production artist. He is currently working on a new batch of creator-owned titles, such as The Paybacks and Interceptor (Heavy Metal Comics), Heroine Chic, Dents, Mirror, and Finality (Line Webtoon). Other publishers he has worked with include Rosy Press, Zenescope, Valiant, and Dynamite. He can be reached at @TaylorEspo or @GhostGlyph on Twitter and taylor@ghostglyphstudios.com