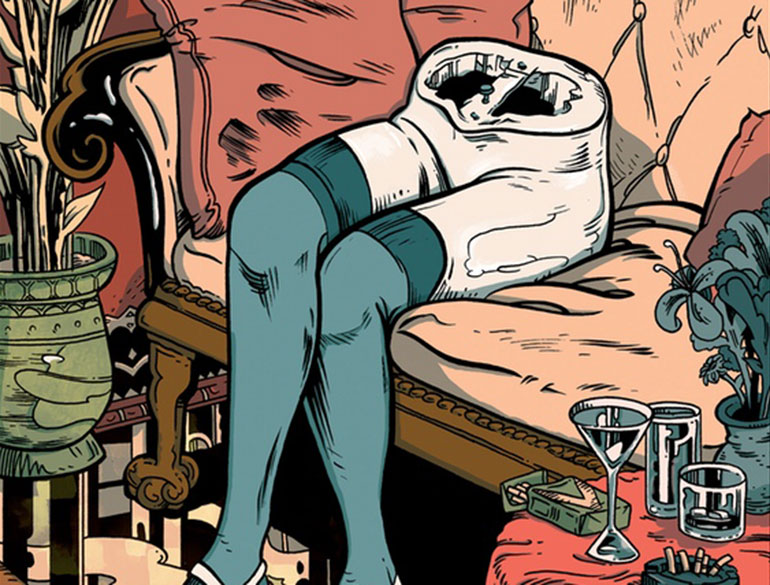 Josh Trujillo is certainly having a busy 2016. In addition to launching a brand new original graphic novel with BOOM! Studios for their Adventure Time series, Trujillo is Kickstarting a hardcover collection for the self-published series he’s been working on over the last three years: Love Machines. Taking romance comics through the intellectual lens of technology — low and high — Trujillo has a wide variety of stories to tell. And he sat down with Comicosity to talk about all of them.

Matt Santori: How did you come to be working on the new Adventure Time OGN, and what does it mean story-wise for you that it’s in the original graphic novel format?

Josh Trujillo: For me, these OGNs are an opportunity to expand on the characters and themes that are touched on in the regular series. For the most part, we’re stuck with these 12-minute vignettes, and we don’t necessarily get the deeper character stuff that we could with a longer piece. I know that these books appeal to both really young readers and people my age and beyond, so I wanted to use that dual-layer humor that I grew up with watching on Rocky and Bullwinkle and The Simpsons.

It’s a chance to tell a complete young adult story using the Adventure Time characters and playing in that world. 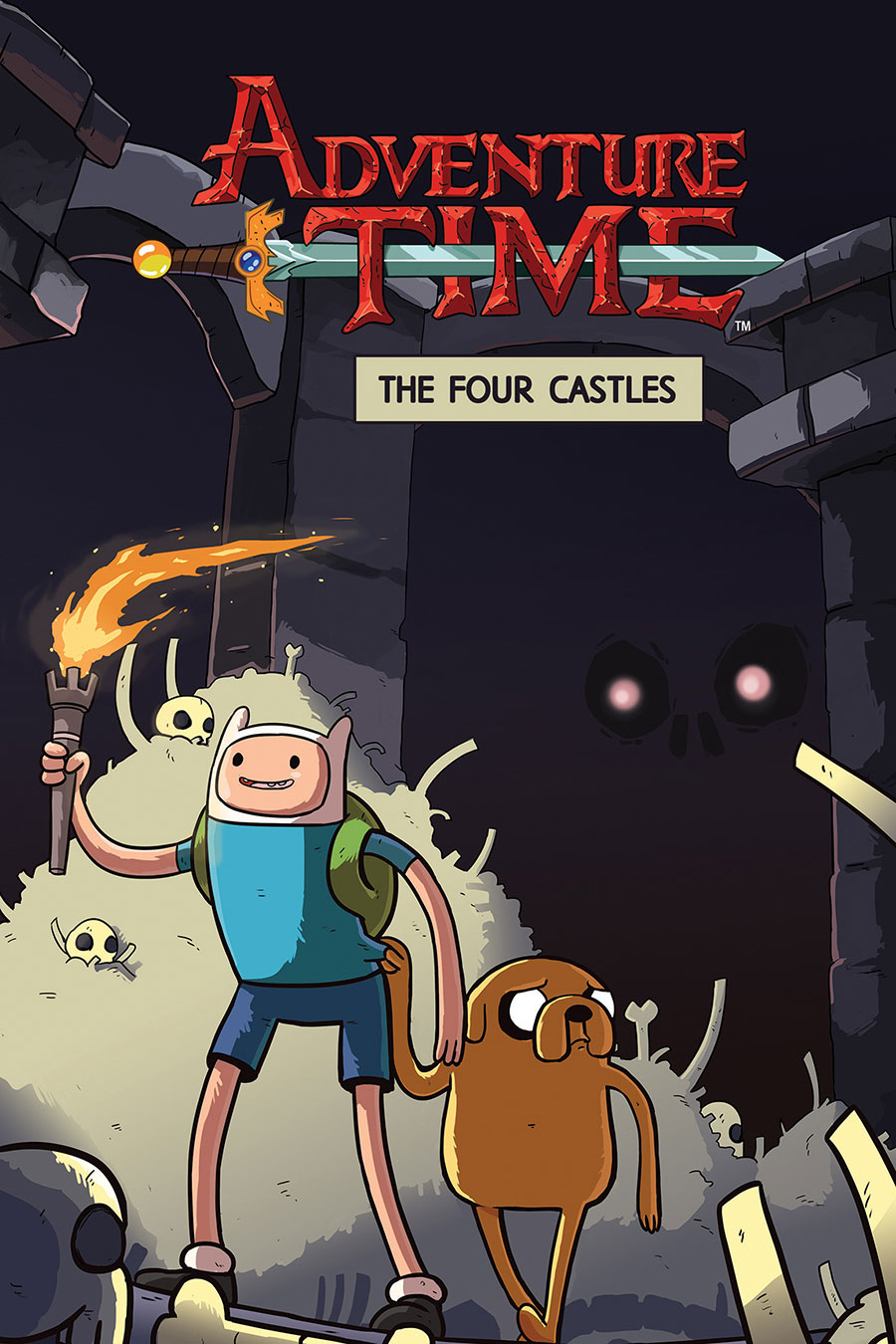 MSG: What’s the premise for this particular OGN?

JT: Adventure Time: Four Castles is about Finn and Jake starting to get some growing pains in their heroism. Jake might someday be outgrowing Finn. Jake has a family now. He has Lady Rainacorn. He has a lot of other things to do beside hunting for treasure and going out to fight monsters.

They’re approached by the Guildmaster of the Manyverse, and she offers them a chance to train to become better heroes. Jake sees this as a good opportunity for Finn. They both agree to do the “Quest of the Four Castles” and recover four magical objects. And along the way they learn that maybe they’re in over their heads in some regards.

JT: Yes! He is the veteran Adventure Time artist, doing the monthlies with Chris Hastings — which are hilarious. He’s done most of the OGNs, so he’s probably had to draw Jake and Finn more than anyone. Which is A LOT.

MSG: You mentioned having to instill that humor that ranges in audience from the very young to the fully adult. Do you find that to be a challenge, and how do you feel you’re fitting in with the Adventure Time “mold”?

JT: I’ve found writing for the youngins to be more of a challenge than writing for my age range or sensibility. I think the easy thing to do is to do a lot of gross out humor and pratfalls — and there is a lot of gross out humor in this story — but it’s interesting to play with a lot of comedic tropes and gear them to kids. Because they haven’t seen them before. It’s all new to them. 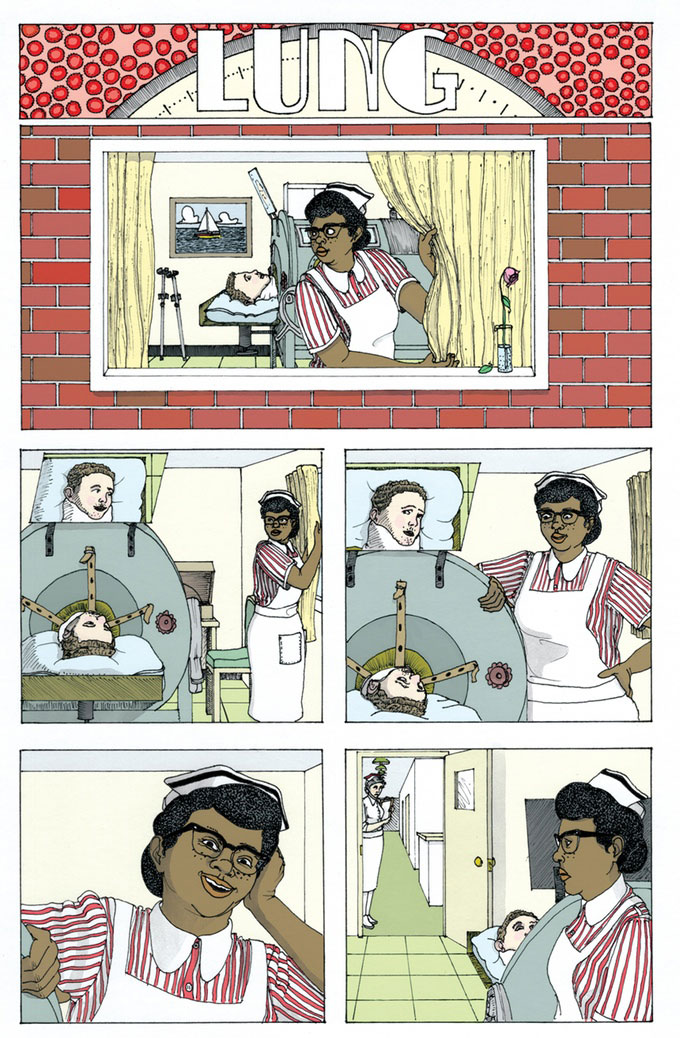 MSG: Switching gears, you self-publish the series Love Machines and have a Kickstarter going right now on the first collection. Tell me a little about that project and how it got started.

JT: I was an intern at Archaia Entertainment and Dark Horse Comics a million years ago, and always knew I wanted to do comics. But my art skills are very poor. I just released a sketchbook of all the presidents, and oh. You can see what a bad artist I am. [laughs]

I was looking for a way to explore the comic format, work with different artists, and come up with what “my voice” would be. I’ve always been interested in the ways in which we interact with technology, and how history informs our lives in ways that we are unaware of — because we are living in the moment. 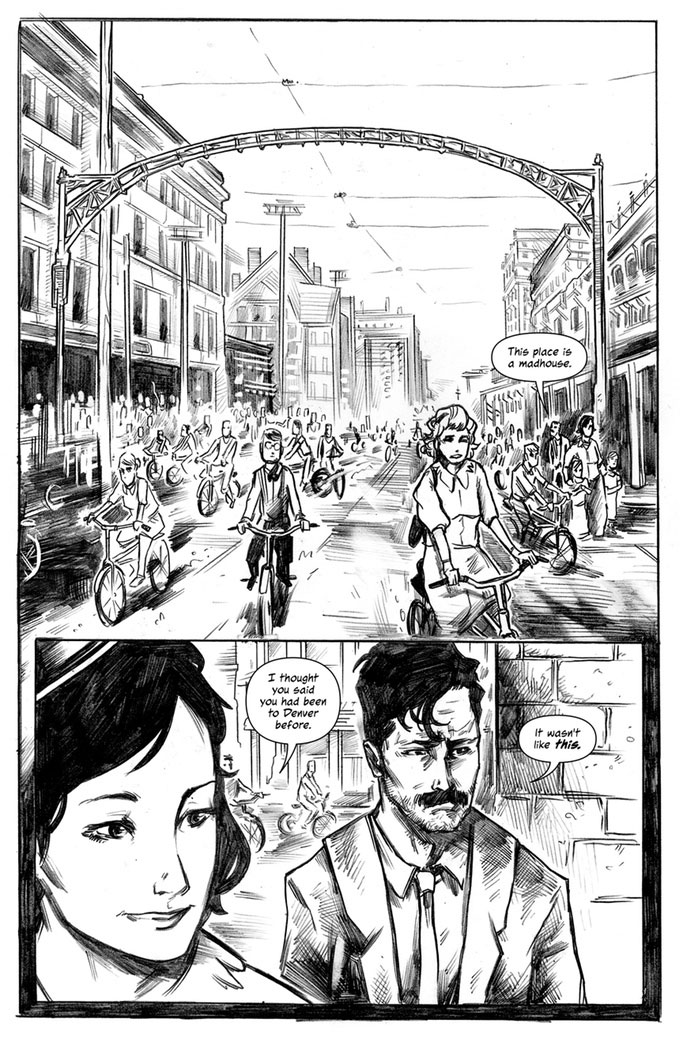 Love Machines is a really great sandbox to play in, in that regard, because I can tell funny stories about a girl working in a Japanese theme park. Or I can tell quiet, sensitive stories about how a bicycle influences a family in the late 1800s. And I can do everything in between.

For the past three years, I’ve been self-publishing single issues and taking them to conventions. Slowly but surely I’ve been winning over people on the concept and the stories themselves. And now I’m finally at the point that I have the first volume completely and can color them in a nice book.

One of the things that I heard a lot at conventions was, “Why aren’t they in color?” Well, now they’re in color! 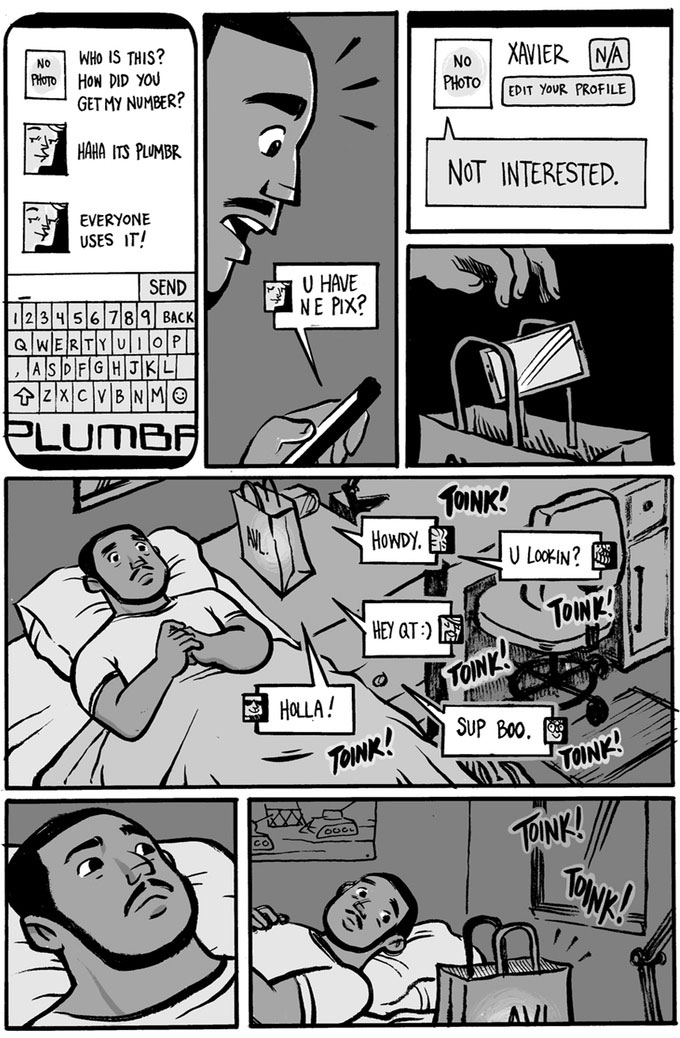 MSG: How did that process work for you? Are you coloring the entire volume? Do you have different colorists on each story?

JT: It varies. For more than a few of the stories, the original artist is also coloring their story. Kate Glasheen, who originally drew the story called “Hero and Leander” (about two supercomputers that go on an internet date), did her entire story in watercolor. We had just released the black and white version of that in single issues.

Other stories like Colin Andersen’s “Sandy Andy” or Ryo Kawakami’s “Workers of All Lands, Unite!” were expertly colored by Mike Dake. A few others will be colored by Chris Northrup, who did The Reason for Dragons and colors a lot of Image books. 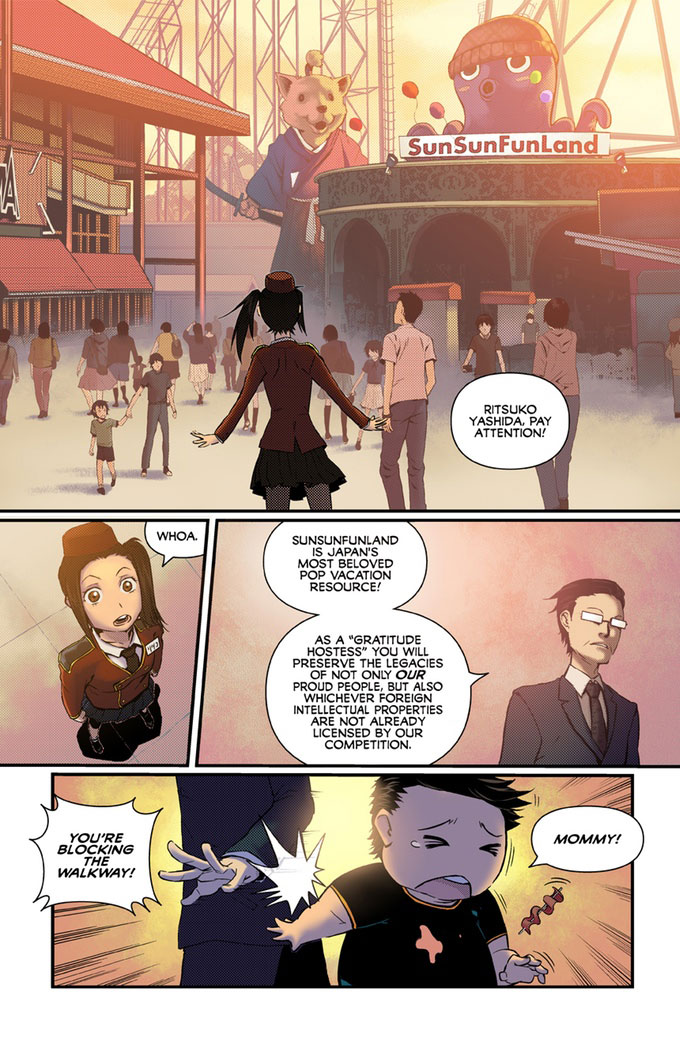 MSG: I noticed that every story has a pretty distinct style, both in colors and illustration. There’s a lot of diversity in the pieces you’ve put together.

JT: Yeah! I’m really proud of having been able to put together and work with as many talented artists as I have, but also artists from completely different backgrounds and styles.

Jonathan Bell Wolfe has a really minimalist, airy style. He did a story called “Solenoids” about a pinball game with the highest of stakes. 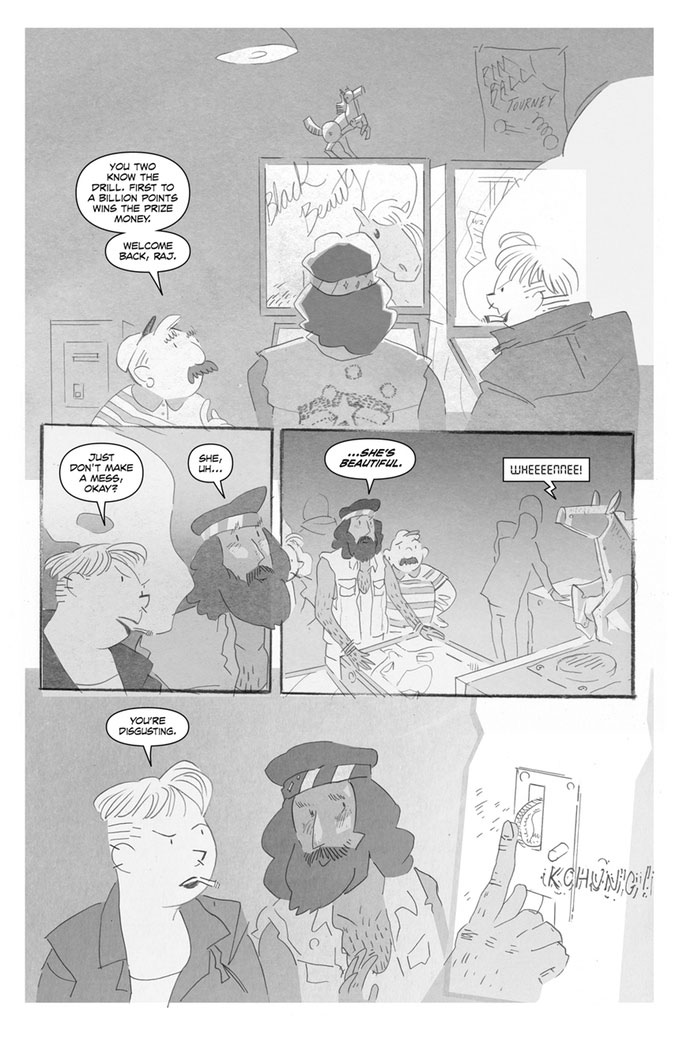 Wyeth Yates is a fantastic illustrator with incredible brushwork. He did “The Most Beautiful Girl in the World” about a famous mannequin, Cynthia, in the 1930s.

I’ve been spoiled! I think comics don’t go far enough to encapsulate all the art styles available to them in the mainstream.

MSG: How do you have the Kickstarter structured for Love Machines Volume 1?

JT: We’re collecting the first nine stories, which encapsulates the first five issues. These will be collected and colored in a hardcover volume. You can get a digital PDF ($9) of those stories if you don’t want to splurge on a hardcover edition ($30). If you want to go bigger than that, you can get both of those, plus a copy of Death Saves: Fallen Heroes of the Kitchen Table ($45), which is an anthology about fantasy gaming that I put together last year. 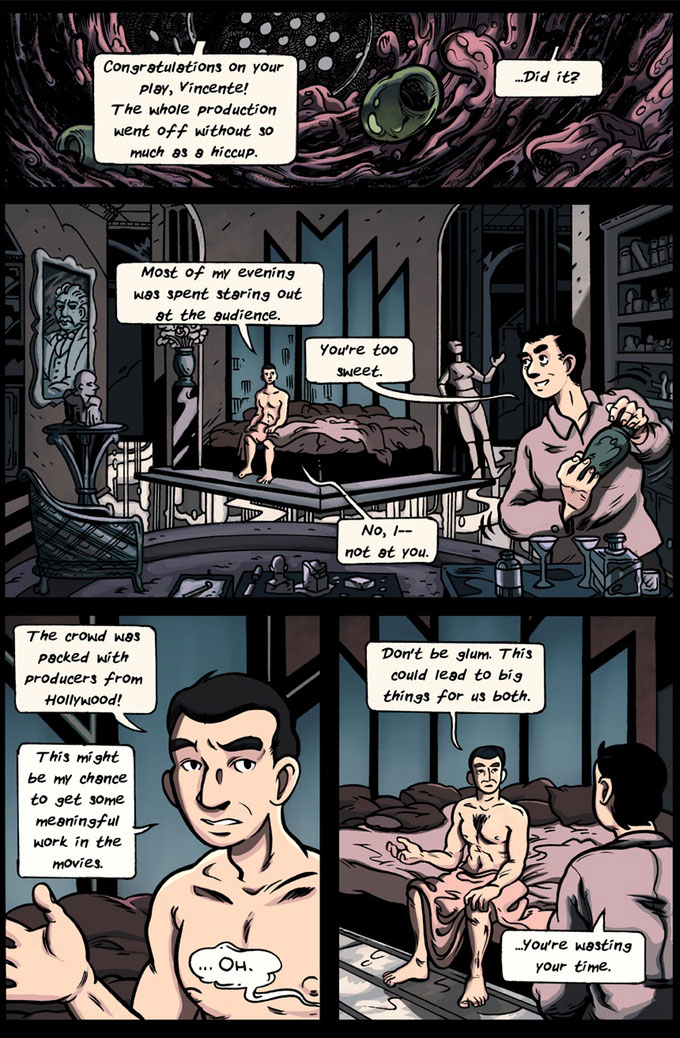 Or, if you want to go even further, we have what I call a Polyamory Pack ($60), which is two copies of Love Machines — one for you and one for the love of your life — as well as a copy of Death Saves.

We also have some original art done by Ben Bishop, who drew the story “The Velocopede.” He has these beautiful, pencil sketch, black and white pages that he drew them really small, but when you blow them up for printing, it’s amazing to see how much detail he put in there. 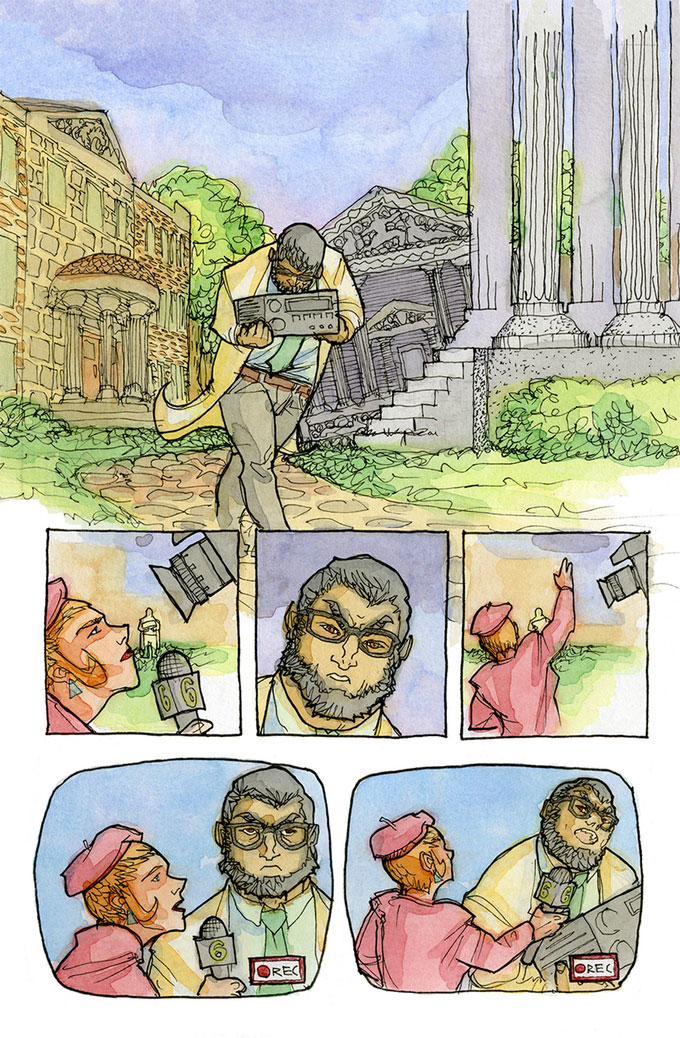 MSG: What are you plans beyond the Kickstarter for Love Machines?

JT: I haven’t quite figured out what format future stories or issues will take, but if the Kickstarter is successful, the first stretch goal is to add a new story called “Electric Moon” with J.T. Cole, that explores how electricity threatens the privacy of a forbidden romance between three people.

I have a whole list of artists I want to work with and boring objects I want to tell stories about! So I hope to keep doing that!

I think romance is the hot thing in comics right now, and I’ve been doing it for a few years. These are stories that aren’t about machines, but about the connections people have with each other. And how we use the objects in our lives and what they mean to us. It’s a wide genre. Let’s bring some more voices into it! 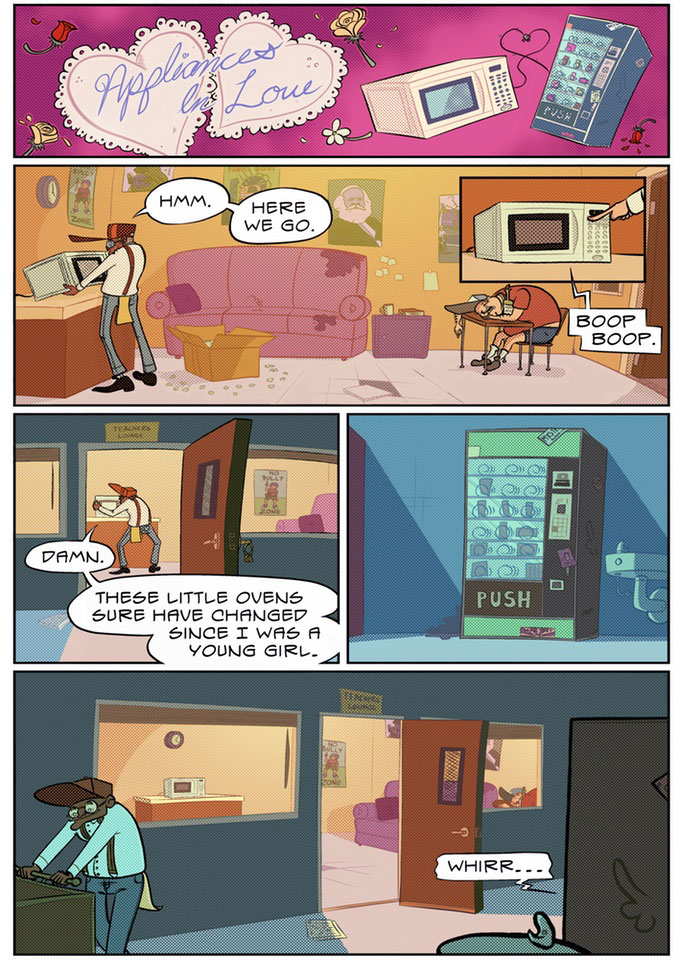 The Love Machines Kickstarter continues until Saturday, April 16. You can check it out and pledge here.