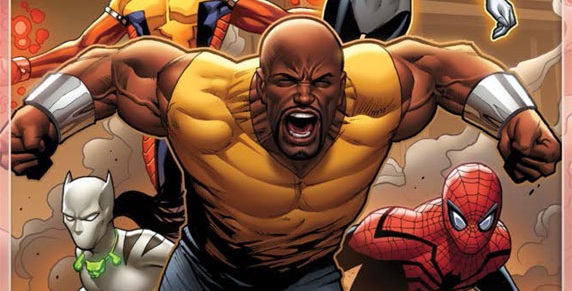 The Avengers have always been a team that comes together under dire circumstances and this September, during Marvel’s Infinity event, the Marvel Universe will call out for Earth’s mightiest heroes once again. Al Ewing will be assembling the Mighty Avengers during the event, led by the star of Bendis’ New Avengers, Luke Cage. Ewing’s diverse crew will be defending Earth from the troops of Thanos in the new series, which Ewing was kind enough to discuss with Comicosity. 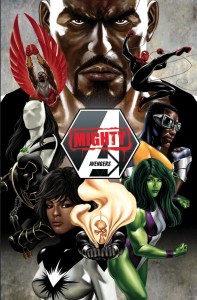 Aaron Long: In the Mighty Avengers you’ve got quite a diverse lineup coming together. Can you discuss the circumstances that pull these characters together under an Avengers banner?

Al Ewing: It’s your basic “there came a day…” scenario, in that something massive and terrible happens – Thanos’ attack on NYC – and there are people in the area who come together to stop it. It starts off as a tight core of Luke, Monica, Spidey and Ronin, and accumulates people from there as they get drawn in. And once INFINITY is over, Luke’s going to be bringing more people in to make his vision for the team a reality.

AL: Luke Cage left the world of the Avengers not all that long ago, and his time at the head of the Thunderbolts was a bumpy ride to say the least. What is his goal for this team, and how does he feel being active and in a leadership capacity again? How does Jessica Jones take Luke leading a team again? 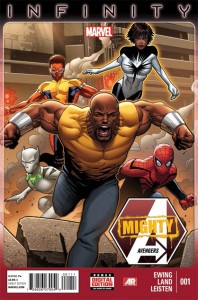 AE: Well, in the first issue he’s doing some serious thinking about how he wants to define himself – as a hero and as a father – and the Thanos situation crystallizes that thinking to an extent. The goal is pretty simple – to help those who need it, when they need it, how they need it. He doesn’t think Tony Stark or S.H.I.E.L.D. are going the right way about that – too much looking down from above, rather than standing shoulder to shoulder. Tony has a saying – “greater threats mean greater needs.” Tony’s looking at the threats. Luke wants to look at the needs.

Jessica’s obviously not that happy about this – especially since Luke goes out of his way to recruit old girlfriend Jen Walters – but, y’know, they’re in love and they’ll work it out. They’re not the only love story in the book, either.

AL: This team has some strong personalities on it, like the Superior Spider-Man, She-Hulk and Monica Rambeau. Cage is as tough as they come, but is he going to be able to rein in these characters when push comes to shove?

AE: Well, the only big problem there is Spidey. Luke, Jen and Monica are on the same page – they may not always agree, but they’re friends and they know how to deal with that. Spidey – or rather, Otto – is the one who needs reining in. Eventually, that’s going to be a job for Luke, and it’s probably not something they’re going to solve with calm, civil conversation. There will be some extreme physical discourtesy happening. 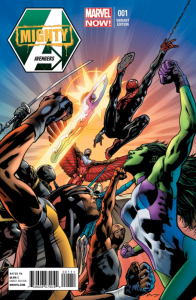 AL: The older members of the team are balanced by some very fresh rookies. What dynamic does White Tiger and the new Power Man bring to the table?

AE: They’re the next generation. It’s kind of limiting to say they’re the new Power Man and Iron Fist, but on the other hand, Luke’s a family man now, Danny’s busy with secret kung fu worlds, and it is kind of sitting there… Two very different fighting styles, two very different attitudes, hopefully if I’m doing my job right they’ve got the chemistry – all that and a possible romance connection Luke and Danny never had (Canonically.) Will they? Won’t they? Should they? I have no idea. I’m just going to write those two crazy kids and see what shakes out.

AL: Any special teases for Comicosity’s readers regarding Mighty Avengers?

AE: I’m bringing back a couple of my favourite childhood villains, and one of my absolute favourite big-time villains comes back in #2 to take on the team. This villain is… MASSIVE. And terrifying.

And we have loads of new bad guys too! At least TWO new world-shaking threats, one of whom will also make an appearance in Iron Man: Fatal Frontier. Who says this isn’t the Marvel age of cross-promotional synergy, True Believer?