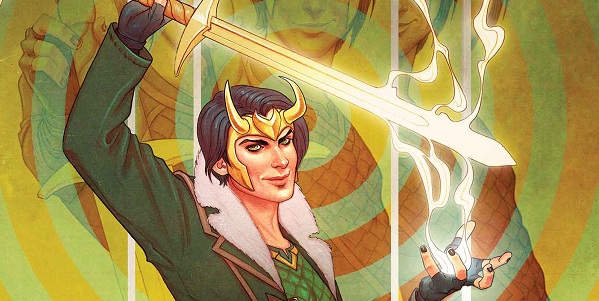 You cannot walk into a comic-con these days without tripping over at least seven varieties of Loki. Thanks to the popularity of Marvel’s Avengers and Thor film franchises, Loki is a hot property among the general masses. Long-time comics readers already knew that; recent series featuring the character have met with both critical and fan acclaim. Now, with the conclusion of Young Avengers, Loki is busting out into the world all grown up and starring is his own solo title, written by The Mighty Avengers’ Al Ewing and drawn by Lee Garbett. Loki: Agent of Asgard has the God of Mischief using his tricksy ways to carry out super-secret spy missions for the All-Mother, rulers of Asgard. Mr. Ewing was kind enough to answer some questions about Loki’s personal motivations, what we can expect from his new job, and who might be stopping by to say hello/exact vengeance.

Alison Baker: To start, the Loki you’re writing is not just an aged-up Kid Loki. This Loki ERASED Kid Loki, now in body as well as spirit. Please console me in 10 words or less.

I can’t! There’s no consolation to be had. There’s perhaps some mitigating circumstances – in that Kieron hinted at the end of his YA run that the Loki we’re following is in fact the third iteration of the character and is no more responsible for the death of Kid Loki than the gun would be if he’d been shot.

Does that absolve our Loki of blame? Is it even true, or just wishful thinking? We’ll have to see. But crimes have consequences, evil will out and fans of the late, great Kid Loki may get to see some measure of justice done. Or vengeance. Which might be more tragic than if he’d gotten away with it.

AB: This story is about Loki acting as a secret agent for the All-Mother. Are they the M to his James Bond? How pervasive a presence are they going to be?

AE: Fairly pervasive. They’re the mission givers, and they have a behind-the-scenes agenda or two of their own. Of course, while they might seem to be of one mind from the outside – ruling triumvirates kind of have to be – Freyja, Idunn and Gaea might find their agendas conflicting. Which could be interesting.

AB: The last time he did this for them, and Asgard found out, they were (briefly) deposed. Why are they taking such a big chance on him again? What’s different this time?

AE: He’s a more valuable resource now, being a big adult, and it’s pretty clear to most Asgardians now that he’s a new iteration. (Even though he might not be.) And the All-Mother has much bigger secrets to worry about, as we’ll see.

AB: What aspects of Loki’s personality are you most anxious to focus on, as far as sharing your take on him with readers?

AE: Possibly his rebellious nature. He’s fighting the tendency of the universe – at least the one he lives in – towards reversion to a status quo. He’ll fight his way out of that box, trick his way out, do whatever he has to to remain his own person. That’s something I think we can all identify with on some level.

And he’s a trickster. Tricksters are fun to write. So despite all the doom and gloom and King-Lear-against-the-storm suggested above, he’s very light and whimsical and mercurial in his day-to-day dealings. He’ll charm the birds out of the trees if I let him.

AB: Loki mixed it up with a lot of people over the course of Journey into Mystery. Some of that has come back to bite him already in Young Avengers; will we see more of it in Agent of Asgard?

AE: Well, there’s the Unforgivable Crime I mentioned earlier – that’s hanging there like some terrible low-hanging fruit, waiting to fall.

And every time I go back and re-read my JIMs and Thors for research, I find someone else swearing vengeance on him, so it seems silly not to have one of them follow up. I have a rough plan in place for the first year, and there’s a roomy spot in the middle of that where someone like Mephisto or Bor could make an appearance, but on the other hand I might decide to fill it with something sparkly and new – I can’t spend all my time surfing on the shoulders of giants.

AB: Is Secret Agent Loki more like James Bond or Sterling Archer/Maxwell Smart? (Is he more of a genuine smooth operator or is he succeeding in spite of himself?)

AE: He’s more Danny Ocean. There’s a very similar scene in both Tomorrow Never Dies – if I remember my Bonds rightly – and Ocean’s Eleven. It’s the ‘villain considers hero nuisance, sends him to special room for a beating’ scene. Bond straight up punches his way out of it, Ocean appears to take the beating – and then it turns out it’s all a trick. That’s how Loki operates. Except when he really is getting beaten up, of course. It’s not always part of the plan.

AB: How is Loki evolving visually, under Lee Garbett? Has there been any expansion of the new look since the project started?

AE: The moment I saw Lee’s Loki, the whole personality of him solidified. His Loki seems much lighter, much more insouciant, and I can’t help but respond to that at the dialogue stage. There are other sides to Loki that Lee’s also very good at drawing, but I’ll stick a pin in that for now.

AB: You’ve said in earlier interviews that you’re eager to continue telling the story Kieron Gillen started in JiM of Loki trying to break out of the good-or-evil paradigm. Another recurring message in that story, though, was “Loki must be Loki.” WHY does Loki keep trying to prove himself to people?

AE: This is what I was talking about earlier, to an extent. It’s not a matter of other people’s approval – quite the opposite – but as long as outside forces are crushing you into a certain shape or a particular future or forcing you to be a certain way, you’re not truly your full self. Loki must be Loki – but Loki must be the one to say what that means.

You can pick up Loki: Agent of Asgard by Al Ewing and Lee Garbett on February 5, 2014 anywhere Marvel Comics are sold.