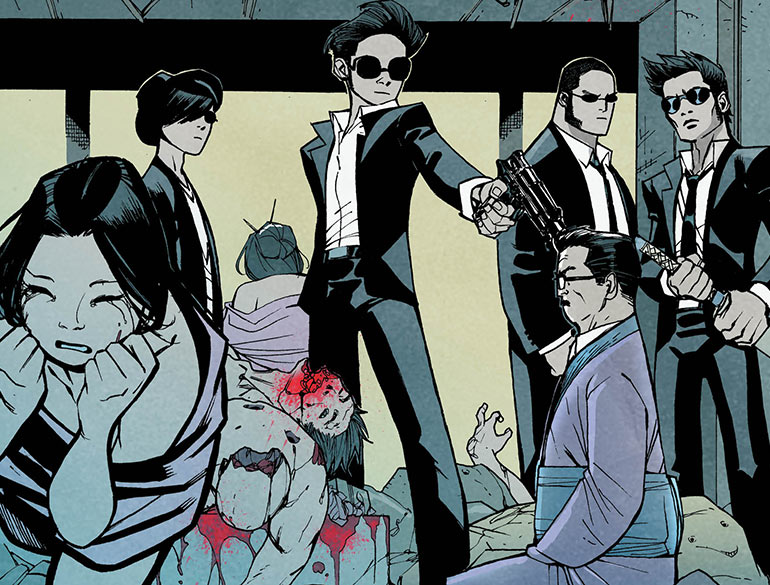 Nothing says “appetizing” like a few severed limbs at dinner time. Once again food critic and all-around star Anthony Bourdain and writer Joel Rose are teaming to bring a new chapter in the Get Jiro! story with Vertigo Comics. Only this time, they’ve enlisted artist Alé Garza to bring Jiro’s origin story to life in the prequel original graphic novel Blood and Sushi. We sat down with Garza to hear how the process of development went, what it’s like to work in this different genre, and a bit about his artistic process in detail. 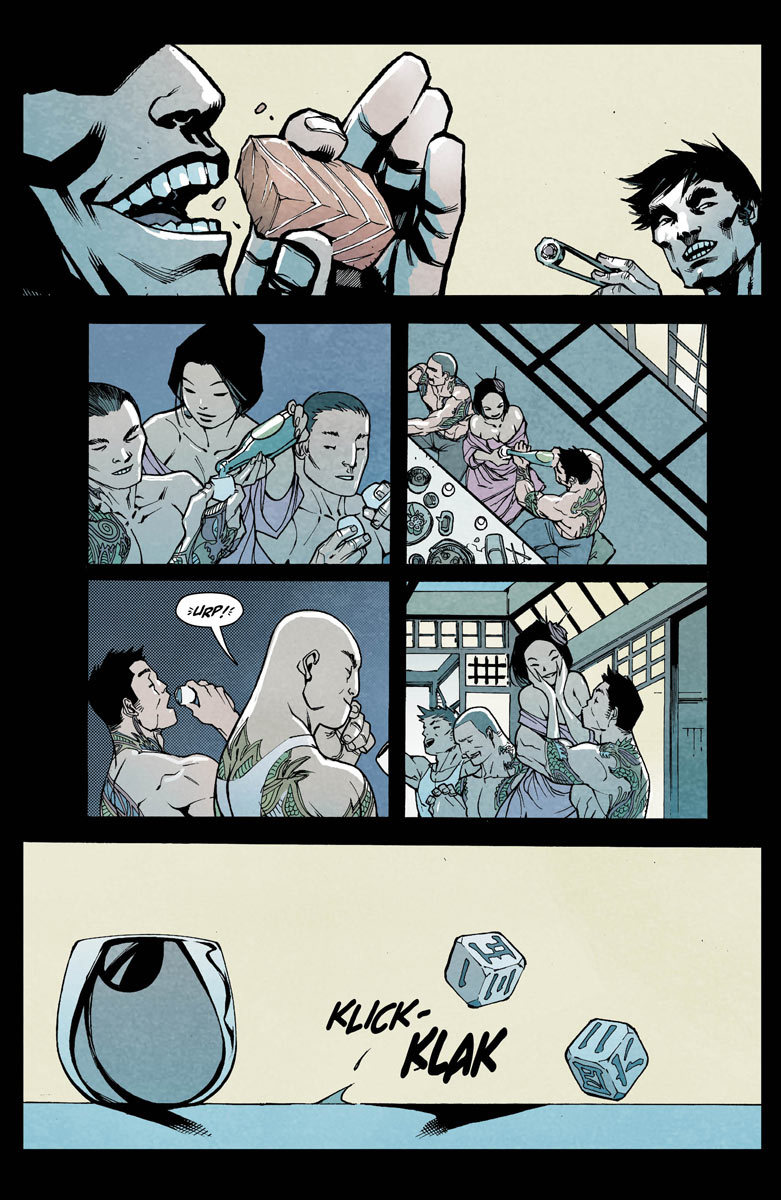 Matt Santori: Alé, how did you get involved in the second volume of Get Jiro!? Anthony Bourdain has spoken a little about why he wanted you on the book, but how you come to the project?

Alé Garza: [Editor] Will Dennis and I met last year right before San Diego Comic Con at one of the local bars down there and he broke it down for me. At first, I was like, “Are you kidding me?” But yeah! He said the writers were Anthony Bourdain (THE Anthony Bourdain) and Joel Rose, and that they both admired my work. They were wondering if I was interested in working on this.

It really caught me off guard, because I never expected in a million years that Anthony would be interested in my work. So, I immediately said, “Yes, of course!”

At that moment, I just dropped everything I was doing. Once I checked out the previous volume, I still asked, “Are you sure this is the direction you want to go?” Because my artistic sensibilities are a lot different than Langdon Foss’s. But I guess they felt that my artwork had a lot of energy and a lot of emotion, and that’s what they were hoping to get in this prequel, to create that back story for Jiro and the world that he came from. 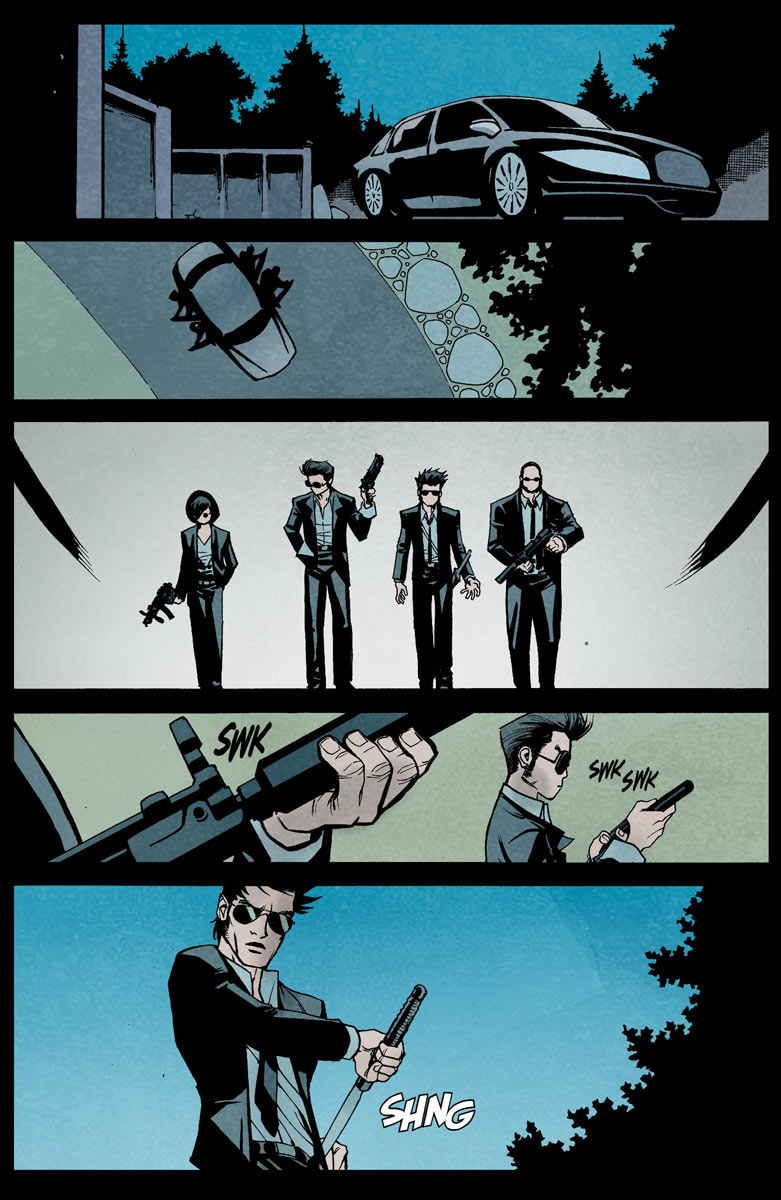 MSG: That’s one of the things I observed. You’re really known for working with a lot of younger characters and women-centered stories. How is working on Get Jiro! different for you in that sense.

AG: Yeah, it was completely re-defining for me. As you said, I’m known for stuff like Teen Titans or Supergirl, and the over-the-top storytelling that comes with drawing mainstream super-hero comic books. So the idea of doing something for Vertigo was like being asked to the cool kids table.

I’ve always known that the main point of drawing comics for me was to tell stories. When I read this great story, I knew what I would have to do to tell it. I would need to refigure my approach to a lot of things. I would need to tell the story from a place of much more decompression, having everything in every panel count in terms of emotion. Camera angles and details would ultimately drive the emotion of the story.

It was a challenge. But it was a good experience and I gave myself the challenge of just doing the best that I could. And after awhile, I had so much fun drawing Ichigo, Jiro’s brother — his emotions and his character. You find the things that you enjoy in each project and focus in on those. With this project, it was easy to do that. 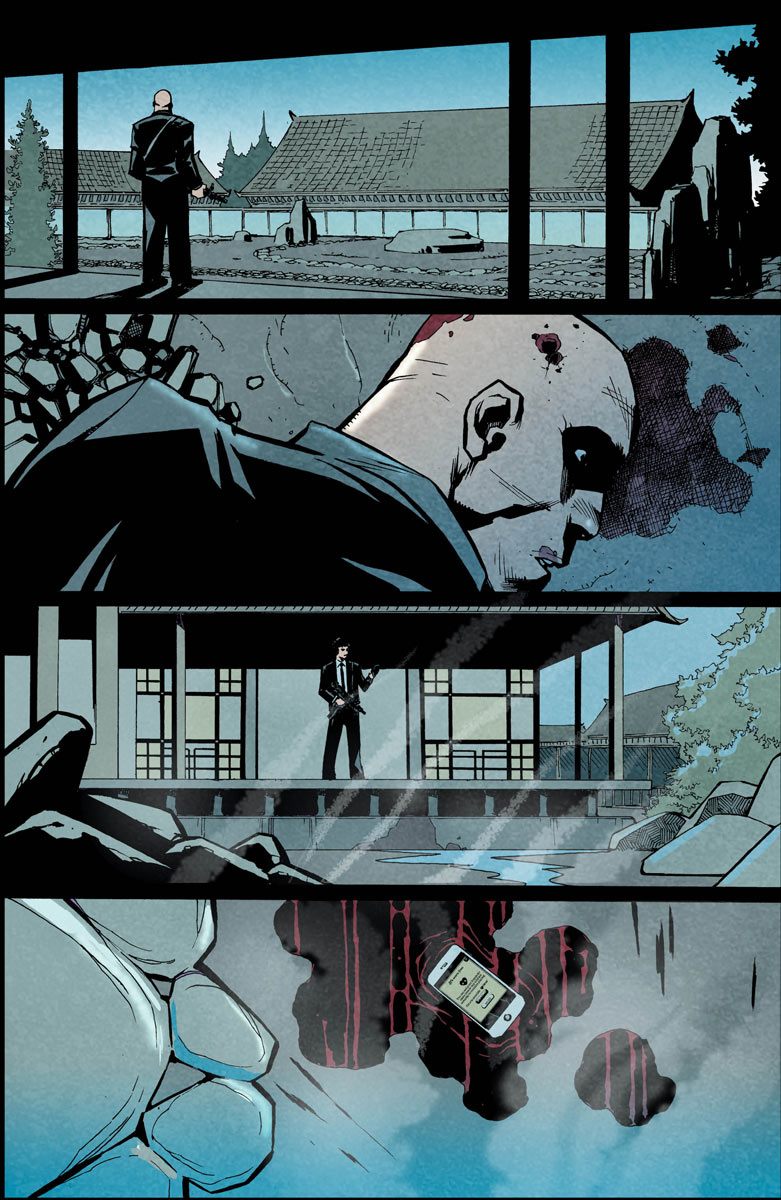 MSG: How much research did you have to go into to picture Tokyo or even sushi? Did you get reference from Anthony and Joel, or go out and do your own research?

AG: Anthony and Joel provided me with a lot of reference for things that they specifically wanted, but I took it upon myself to go out and create my own reference file. I have a little folder on my iPhone now of straight food reference. So, whenever it came to drawing a scene that involved food, it definitely added an extra step to the process than I normally have, to ensure Anthony and Joel were satisfied with the look of it all. It is definitely an integral part of the story, so it’s very important to get all the details spot on, right down to drawing the right kind of cabbage.

MSG: How was working with the guys in general?

AG: It was great! I never thought in a million years that Anthony would even respond to my email, but he always did. Both guys were always available and we had a great working relationship, not to mention with our editors Will Dennis and Jamie Rich.

Everyone was always open to ideas, and there were even a few ideas that I had that I got to throw in for fun.

MSG: Are you drawing traditionally with pencil and paper or drawing digitally these days?

AG: I am still old school, working with paper. Yep. Every couple of months, my assistant editor would have to send me a big pile of paper. [laughs]

But yeah, I still work with pencil and pen. 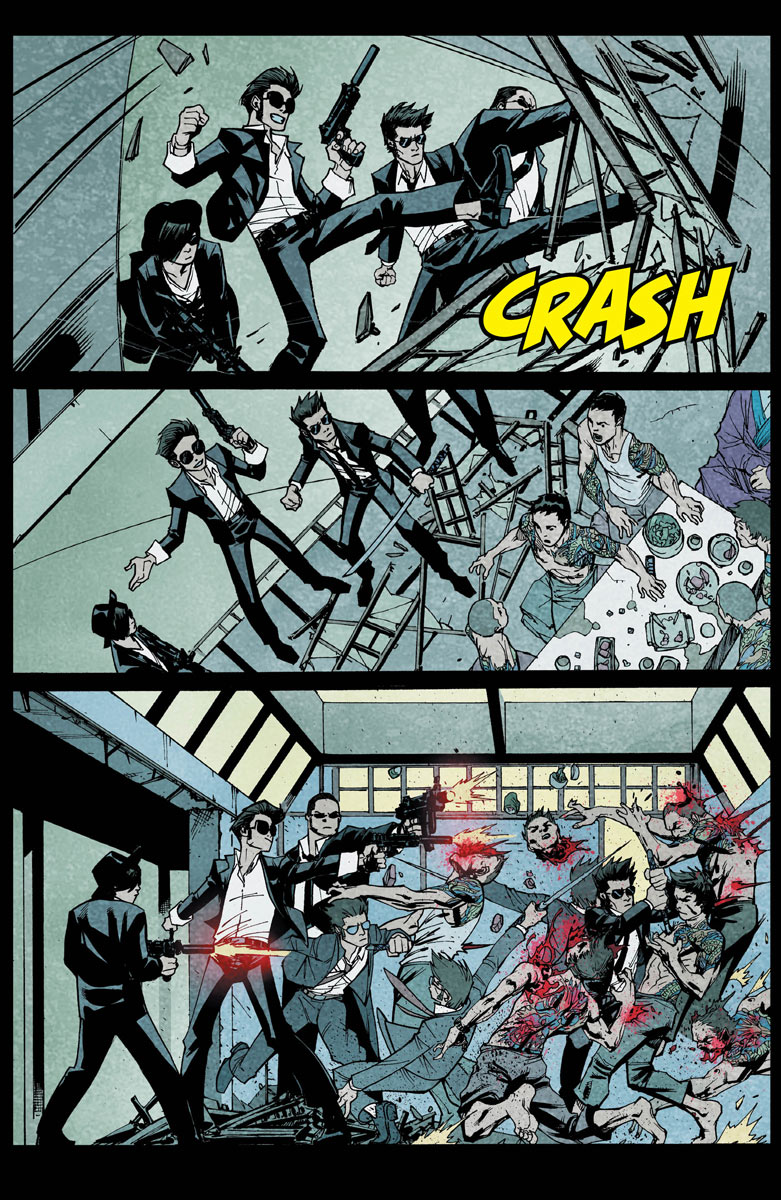 MSG: I know a lot of our readers are interested in the craft of illustrating comics. Can you talk a bit about the specific tools you use and your process in general?

AG: Usually all of my layouts are very detailed, but this is the most detailed layout book I’ve ever done. I have the whole book laid out on 4×6 squares. You can see the whole story in these little sheets. I do that to make sure everything is approved and that everything is there. Once that’s approved, I’ll just transfer that layout to Bristol board and block in all my shapes with an HP lead mechanical pencil.

From there, I usually go in with my brush pens and start inking straight from the breakdowns. Normally, I wouldn’t, but since I was inking this book myself, it was easier to go straight to the inks. But because I had down the breakdowns so thoroughly up front, there were no surprises for the editors. The information was all there. Well, not intentional surprises anyway.

MSG: Do you have a preference for inking yourself or not?

AG: It depends on the project. When I’m working on something like Deadpool and have to do more of a straight-up super-hero style, there are certain inking techniques that a skilled inker can pull off better than myself. For something like Get Jiro! that’s more emotion-driven to where inks are just finishing the thought process, it works well to do it myself. I did have Dan Green come in on a couple of pages, which was amazing to see him work over my pencils. I hadn’t worked with an inker in awhile, so that was really cool to see.

It comes down to the project. I just did some fill-in pages on The Flash that have Norm Rapmund as an inker and they came out much better than if I had tried to ink it myself. I’m not so good at inking the speed lines. [laughs] 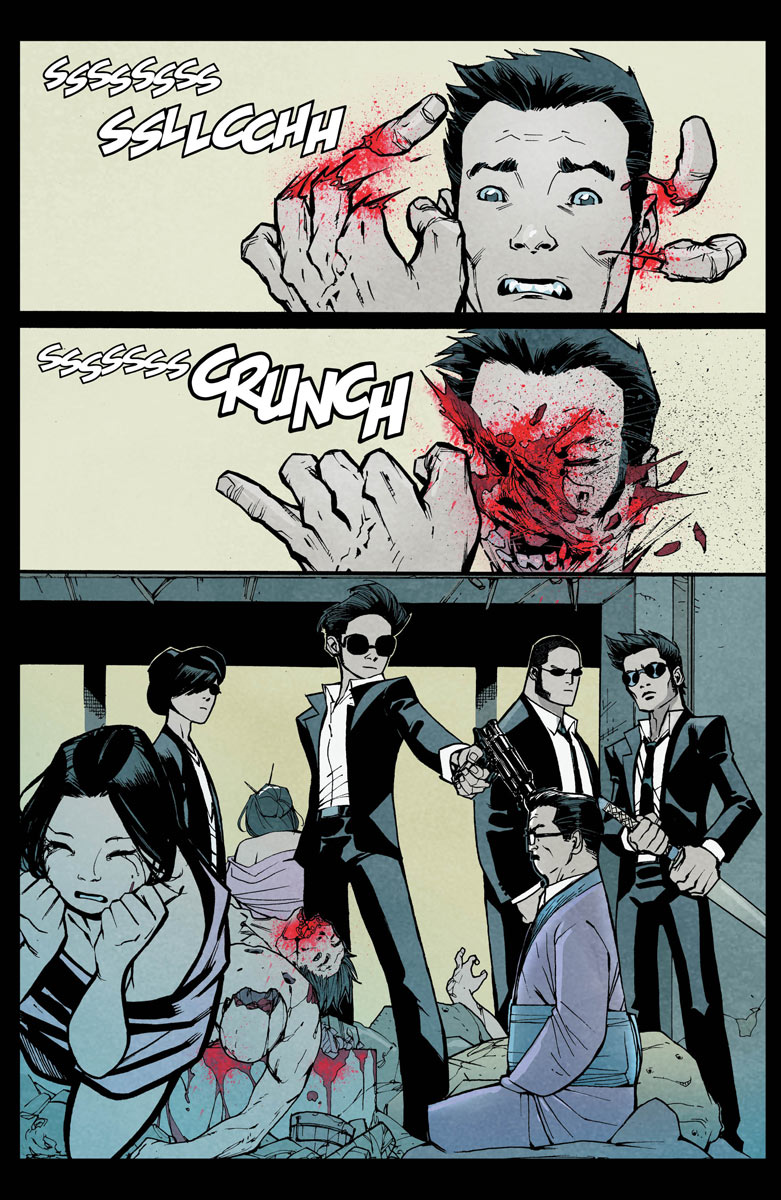 MSG: Without spoilers, can you share your favorite part of the graphic novel — either what you enjoying drawing or reading — as fans prepare to go out and Get Jiro!?

AG: Definitely overall, I really enjoyed the relationship between Jiro and his brother Ichibo. Ichibo was, for me, the most compelling character to draw. The dynamic between those two characters — with the father being thrown into the mix — and the contrasting personalities of all three characters is just something that I feel like I pulled off. We’ll see if readers feel the same. It’s those character moments that I hope everyone really enjoys.

The original graphic novel Get Jiro!: Blood and Sushi, illustrated by Alé Garza, is now available in comic shops and book stores everywhere and online!