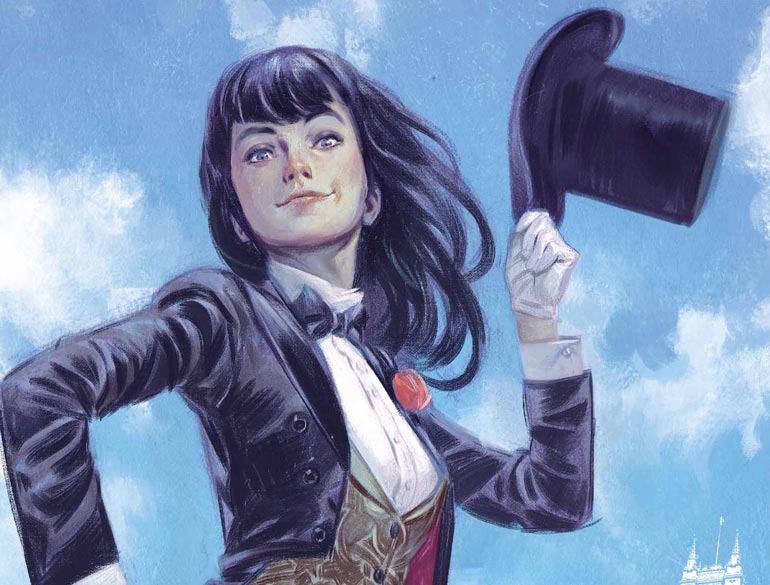 Ready to go back to school? Zatanna sure is, as she and a host of other magic characters in the DCU enroll in the new YA mini-series Mystik U. Written by Alisa Kwitney and illustrated by Mike Norton, Mystik U follows Zee, Sebastian Faust, Enchantress, Sargon the Sorceror, and new character Pia as they investigate a new menace hitting campus. Kwitney is on hand to share some thoughts on each character and how the world of YA is intersecting with the darker side of DC Comics. 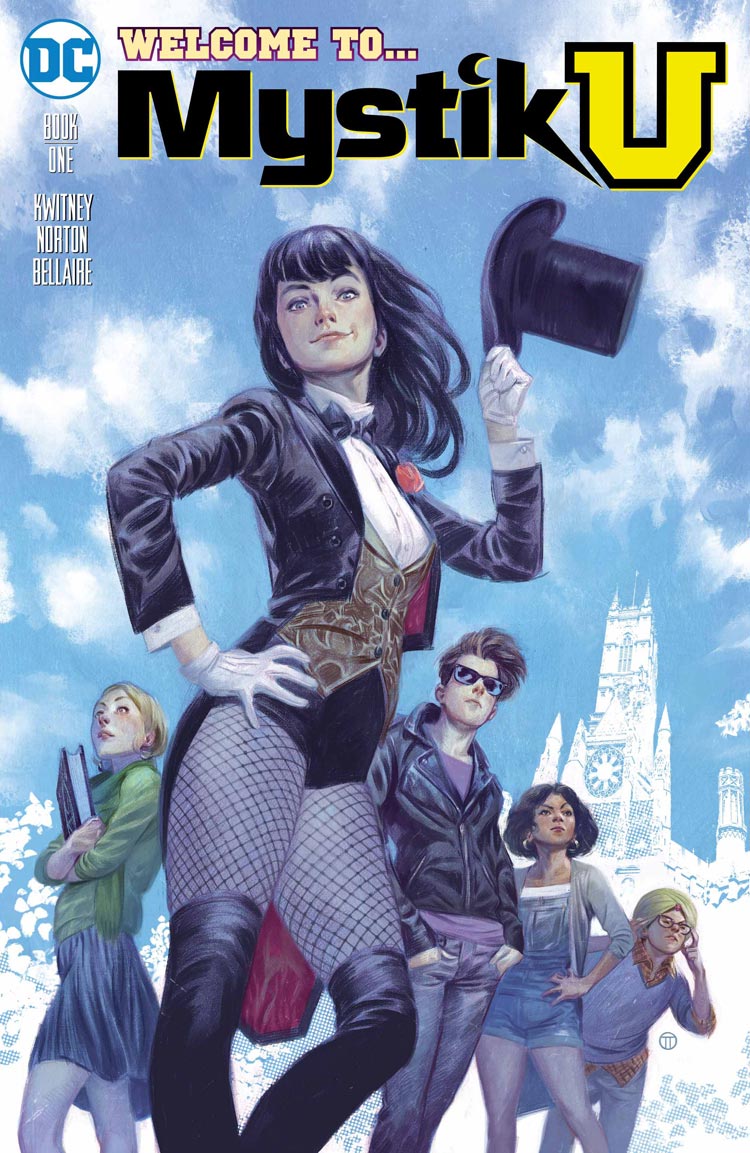 Matt Santori: Alisa, congratulations on launching Mystik U for DC Comics! It seems like the book was long in coming. Can you share a bit about how the project evolved into what we’re seeing in solicitation?

Alisa Kwitney: Thanks! I’m incredibly excited that this book is coming out after its long gestation. It’s been through quite a few changes. When this all began, about three years ago, I met Bobbie Chase and she talked with me about pitching some ideas. She mentioned this one idea that involved cosplay, and I thought that sounded really intriguing.

As I began to work on it, it morphed into a university and the focus shifted to watching students discover and grow their powers. As for who those students were, that was another change—originally, my mandate was to use mostly obscure and new characters. That changed, obviously!

What has remained the same is my take on college as a kind of theater where people go to improvise themselves. 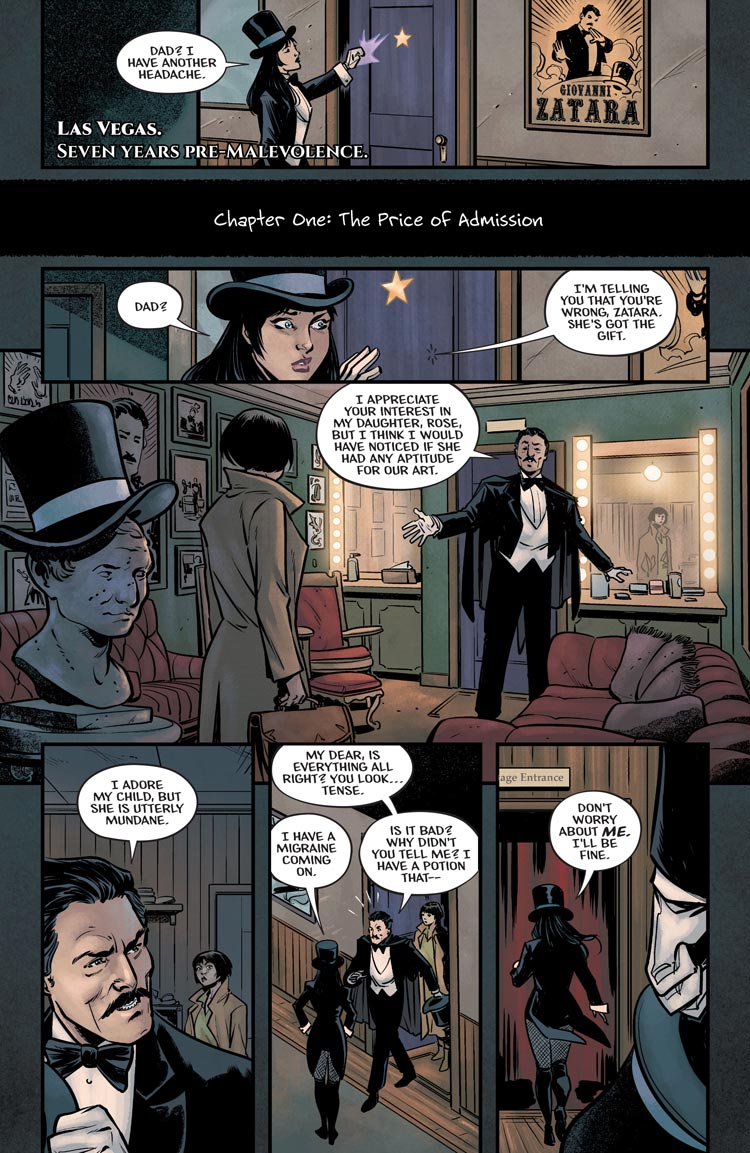 MS: The idea of taking some of DC’s most prominent magic-users and rewinding back to their early college years is a ton of fun! How are you thinking about that kind of transition period in their lives — and how does magic complicate that?

AK: Well, in the real world, you might go into college thinking that you want to major in music and discover that what really excites you is environmental studies. Or you could start freshman year with a passion for theoretical math, and then find yourself challenged by the material for the first time in your life.

At Mystik U, these kinds of discoveries are complicated by the fact that magick isn’t as contained as math. If you mess up an equation in class, it won’t send ripples through reality.

The other complication is that using magick is like being in the mafia. If you’re not in the mafia, mafia rules tend not to apply to you. But once you’re in, you are bound by mafia laws. Once you start studying magick, the magickal world sees you and responds to you—whether you know how to handle it yet, or not. 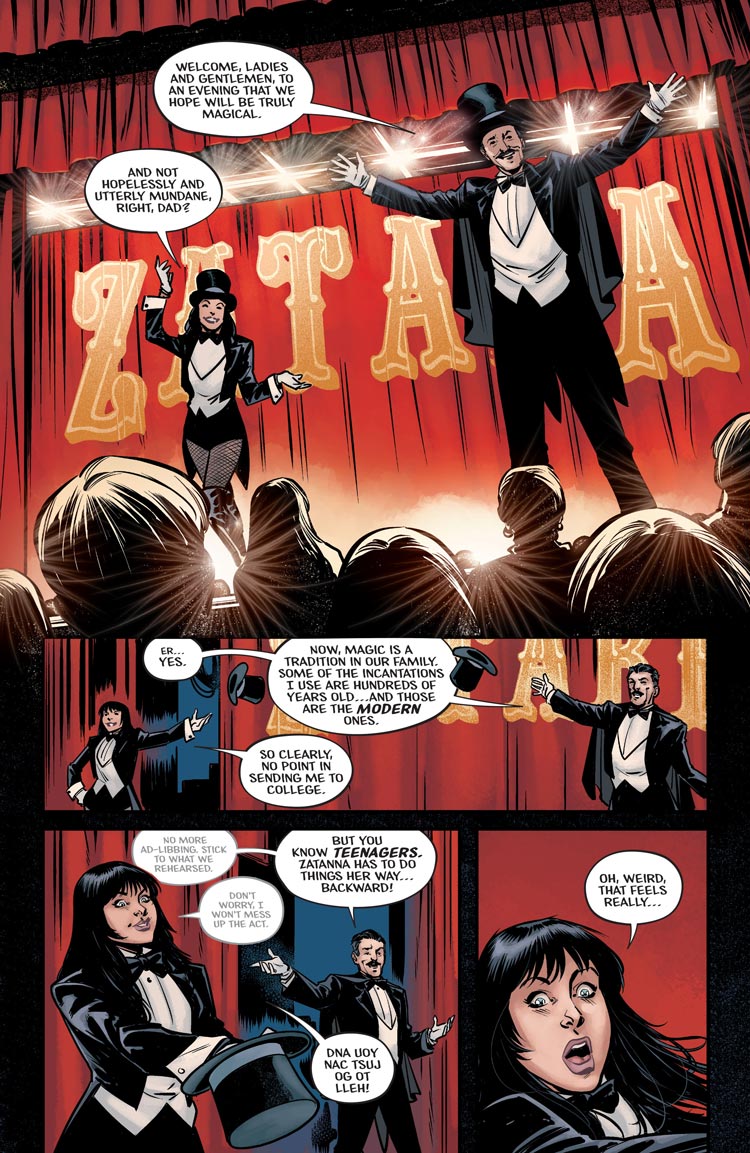 MS: Of course, the highest profile of the group is Zatanna, and to some degree, very long time fans have seen her path from teenager to wizened mage. Are you jumping off of old stories at all or re-envisioning Zee from scratch?

AK: I always approach characters from the inside out, so my Zatanna is going to be a bit different, but I’m also a longtime Zatanna fan, and part of the fun of writing her is honoring her history. So I’m sort of combining old stories and re-envisioning Zatanna.

MS: We also see Sargon the Sorceror, the Enchantress, and Sebastian Faust as central to the story. All three characters have a bit of a darker past, although a bit of the light as well. How does that play up at this age and stage in their development?

AK: I think college is a time when people can be incredibly serious and see things through a glass darkly one minute, and then switch gears and see the absurd aspect of things. It’s a time when you can feel like Cassandra, seeing a terrible fate and not getting anyone to listen to you, and then feel entirely preoccuppied with the unexpected connection between you and someone you just met. I try to convey that dichotomy with Enchantress, of course, but also with Sargon and Faust. 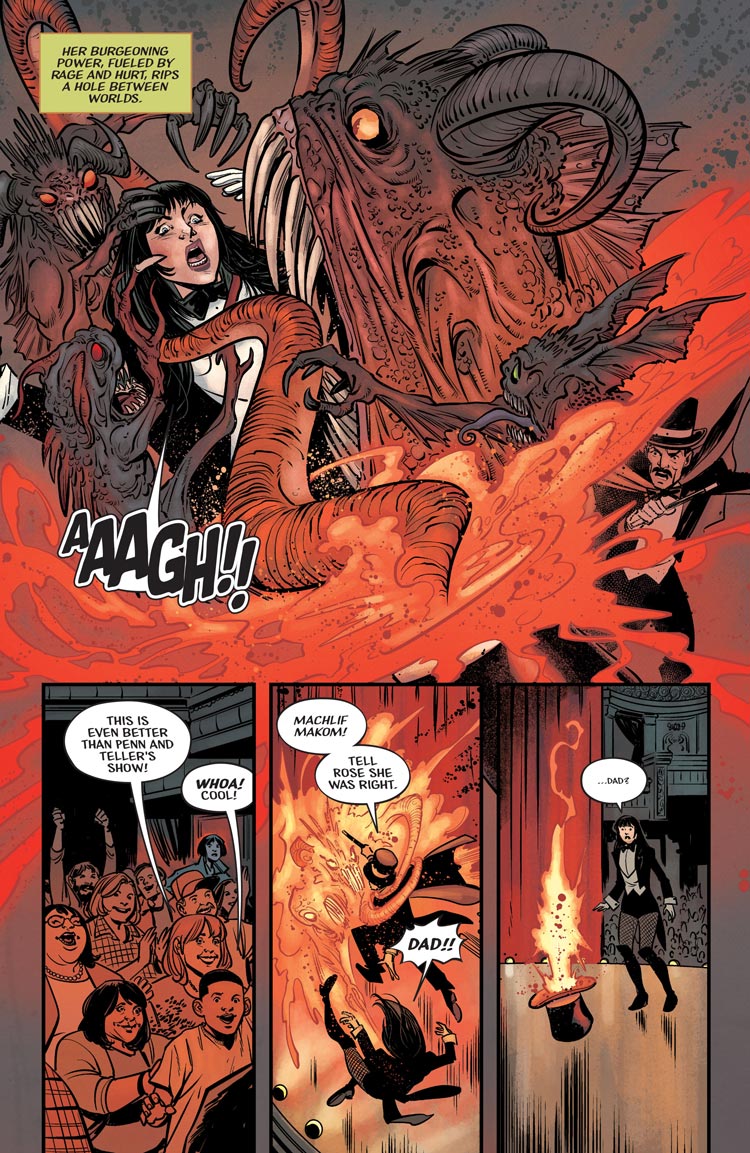 MS: You’re also creating a brand-new character with artist Mike Norton: Pia Morales. What can you tell us about her and what role she will play in the story (and maybe the future of the DCU)?

AK: Pia is smart and snarky and pretty self-sufficient. Her mother is a surgeon and her father is a lawyer, and she sees herself as a healer—but as we’ll see, she’s inherited some of her father’s talents as well. (In a magickal context, of course.) I should also add that her power manifests in kind of a gross way.

MS: How is the collaboration with Mike going, and what about his work is surprising or exciting you as you move along in the book series?

AK: Mike continuously surprises and excites me. One minute, he is drawing a hell creature dripping with foulness, and the next, he is capturing the nuances of the dynamics between Sargon and Faust, or between Pia and Zatanna. He draws the most amazing sets—you can just feel how much he loves getting into the feel of this ancient, magickal place.

But the biggest surprise has to be the way that he caught on that Faust is the beefcake of this book. I particularly love how he found a way to suggest Zatanna’s iconic costume while keeping her looking like a legit college student. Faust, on the other hand, has his shirt off twice in the scripts I wrote—and Mike just threw in a third time. 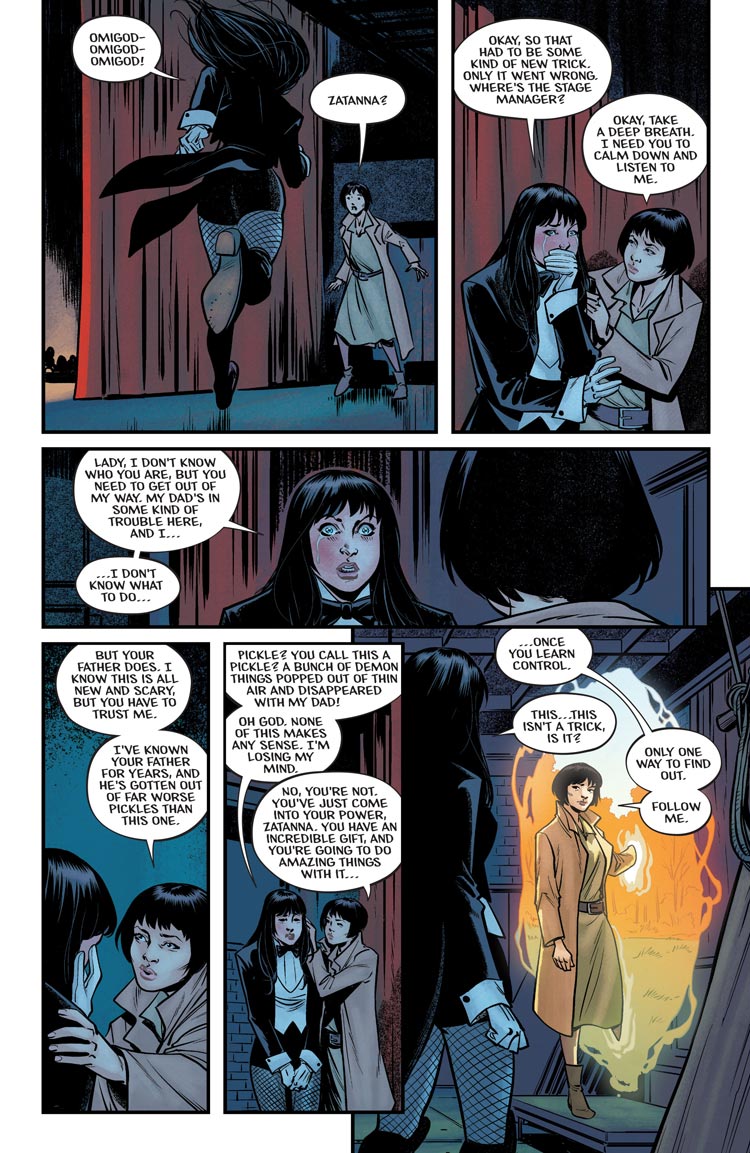 MS: It strikes me that Mystik U is very similar in some ways to the recent prestige series, Supergirl: Being Super by Mariko Tamaki and Joelle Jones — taking some of the DCU’s characters and looking back at formative years, maybe even for a teen audience?

How much of the aim of the title is looking for that YA or teen flavor?

AK: I read and write YA (I wrote Token for the Minx line, and my first YA novel Cadaver & Queen, is coming out this February), and for me it’s less about aiming for a teen audience than being aware of what makes YA work. In my opinion, YA’s special sauce is that it combines a lot of focus on the psychology of characters and their interactions, while still sending those characters on adventures that take them out of their routines. 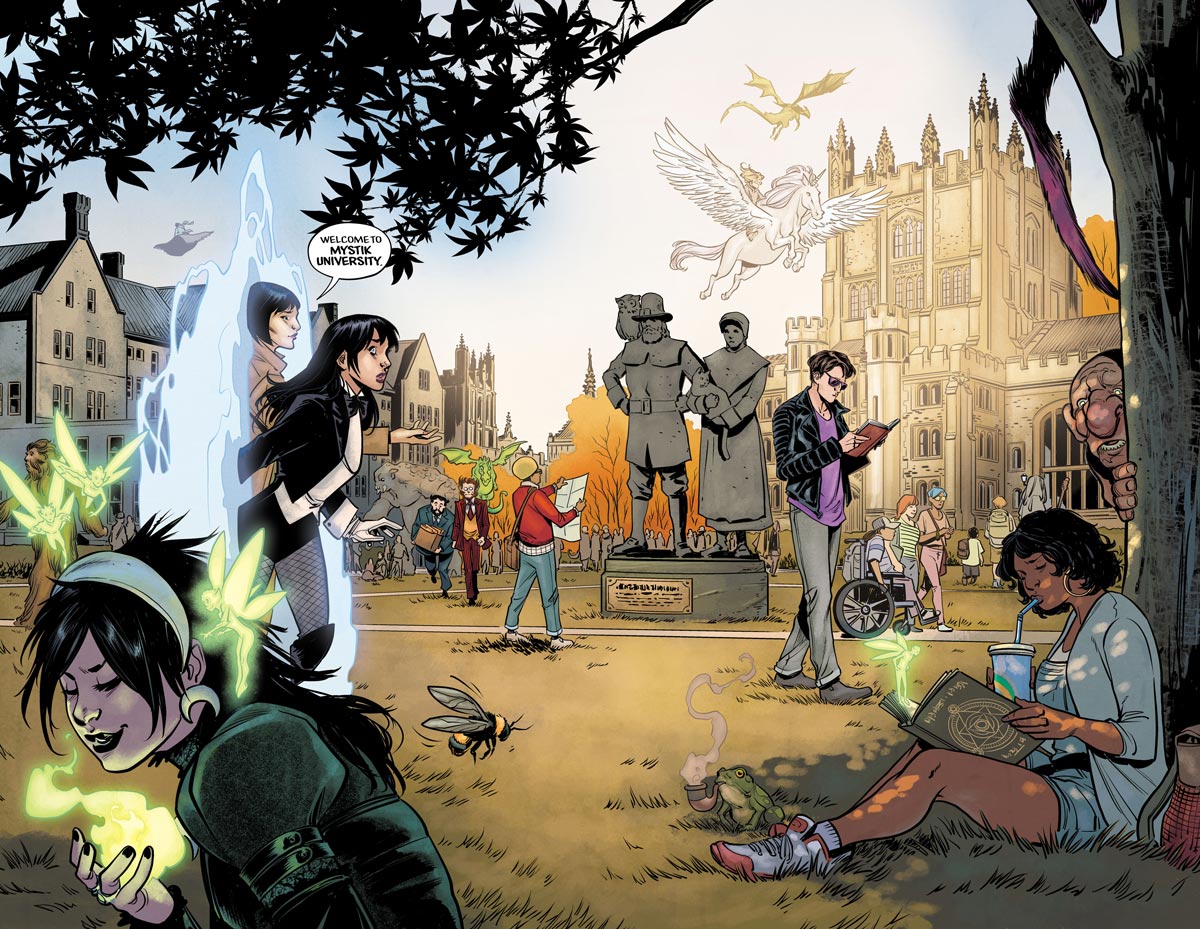 MS: What else can you tell me about the school itself — it’s actually a fairly rare setting for the DC Universe, outside of the recent Gotham Academy series?

AK: Mystik University is located at a nexus of ley lines in Mystik, New York, which is somewhere between Poughkeepsie and Red Hook. The dean is Rose Psychic, who shares a body with Dr. Occult, and a lot of old DC magickal folks teach there. You can spot Vanessa Van Helsing and Donovan Caine, for example. And the Three Witches.

MS: Any final thoughts or special teases for the Comicosity audience pending the arrival of Mystik U?

AK: There’s a new character introduced in the first issue that is a bit of an homage to a weird DC horror title from the seventies. It was also influenced by a short story Joe Staton drew around the same time. The fact that Joe is drawing even better now than he did then is making me think he may have made a pact with Nebiros, though.

Check out the prelude pages here, all illustrated by Mike Norton, Jordie Bellaire, and Deron Bennett: 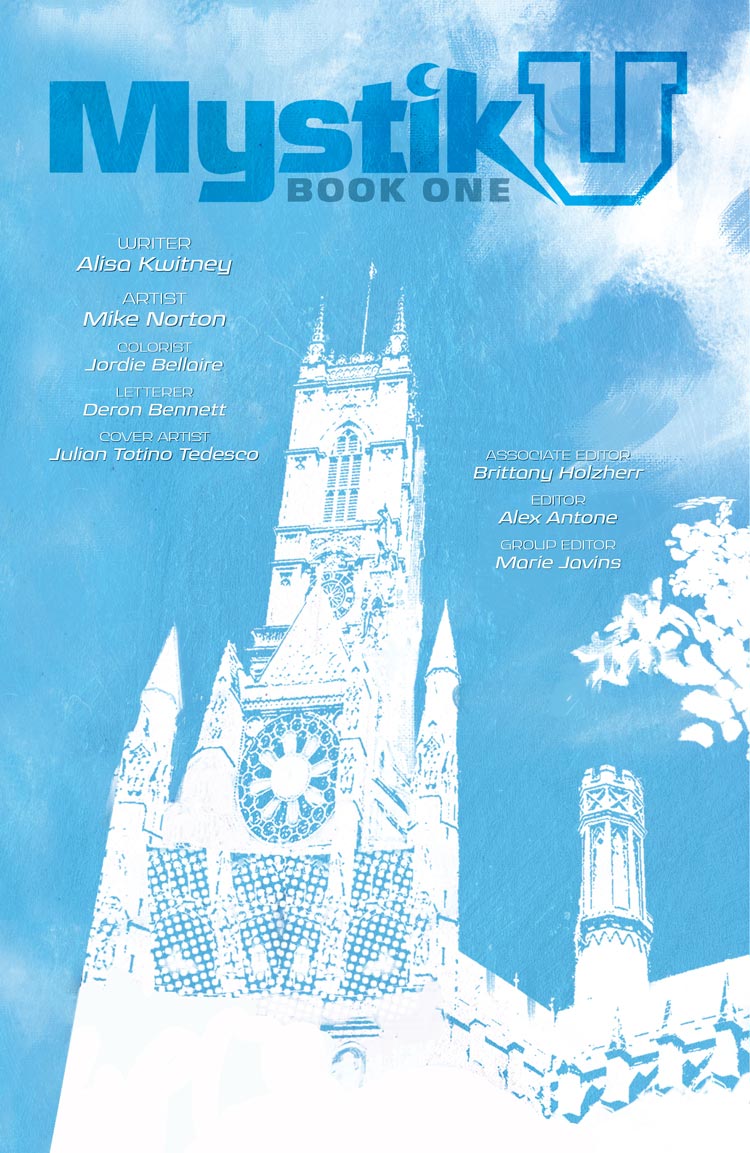 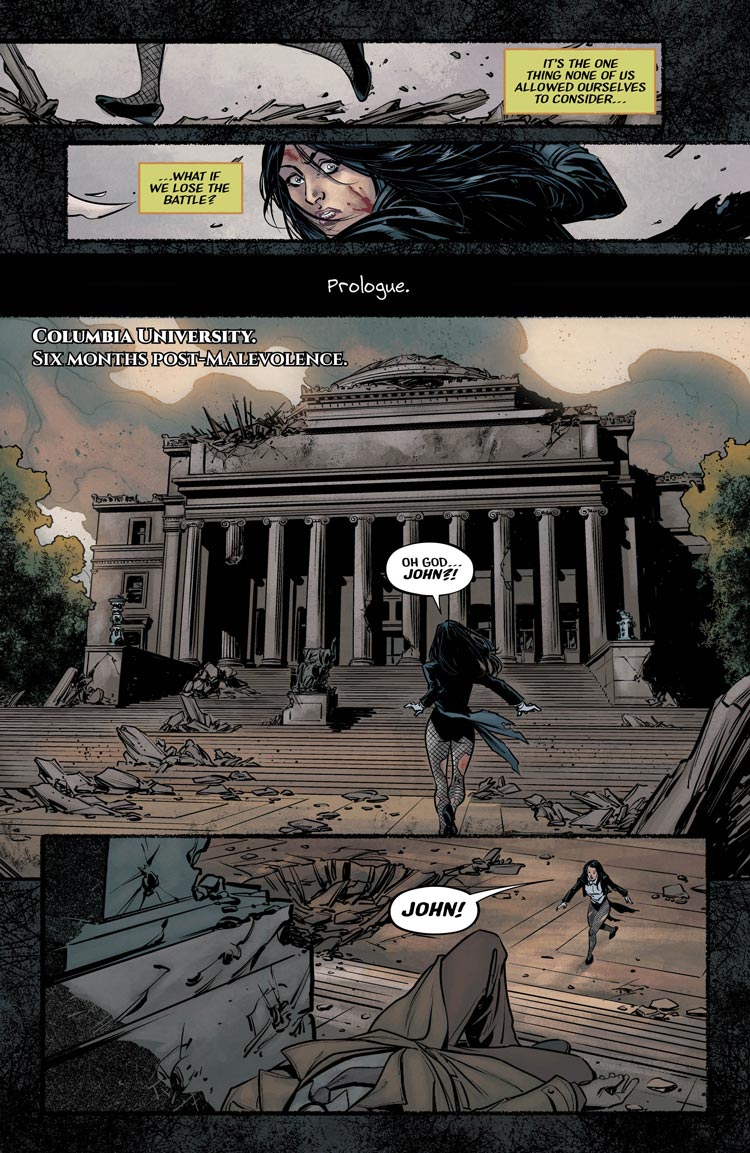 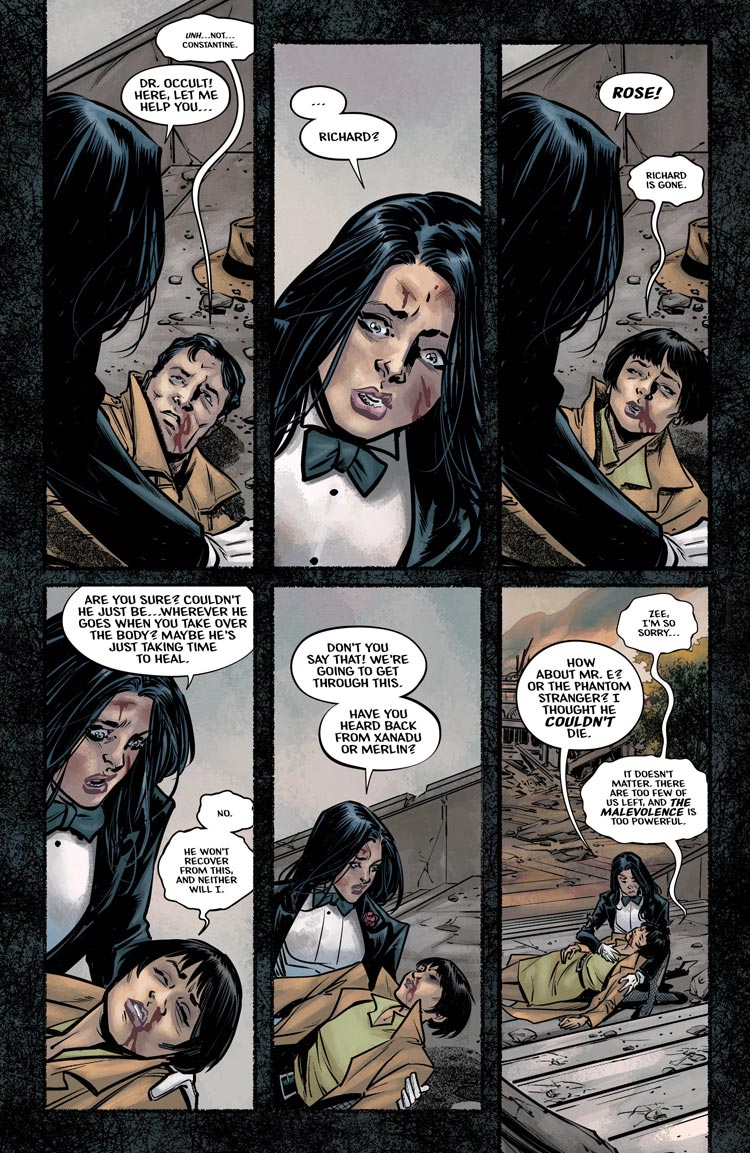 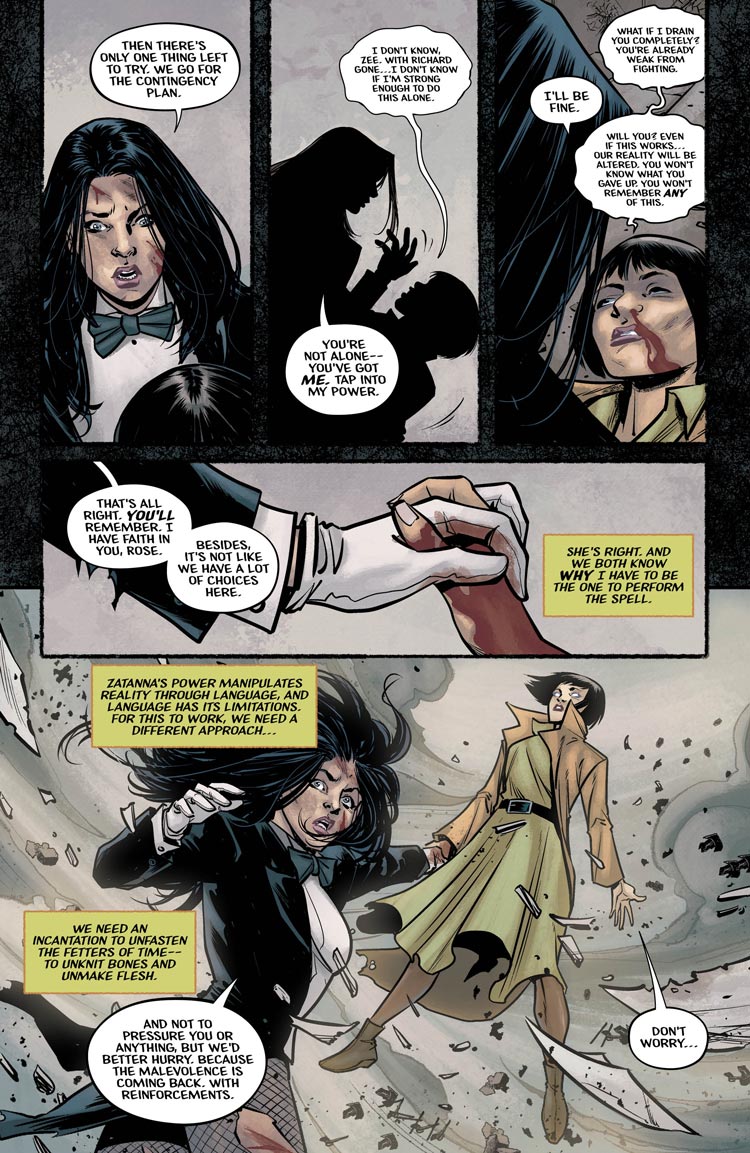 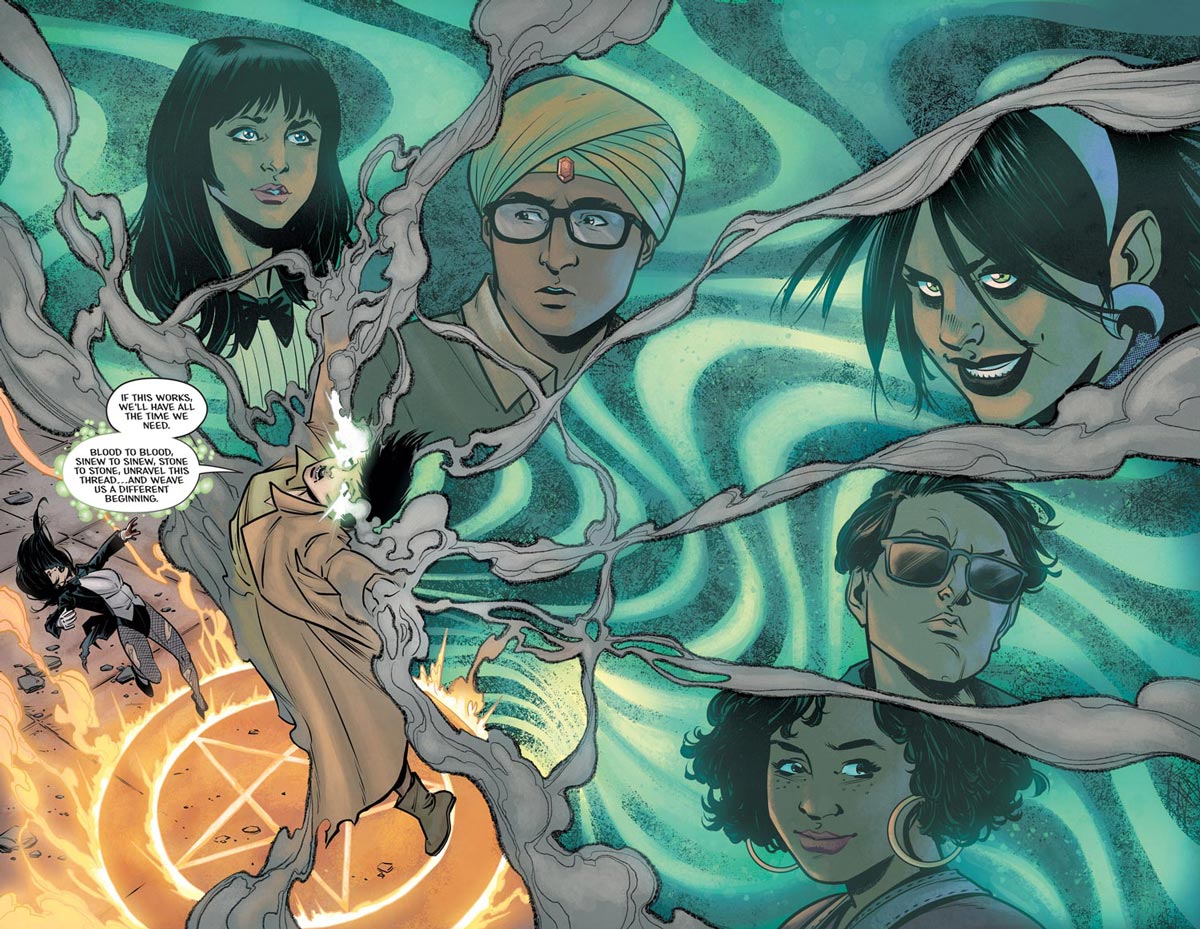