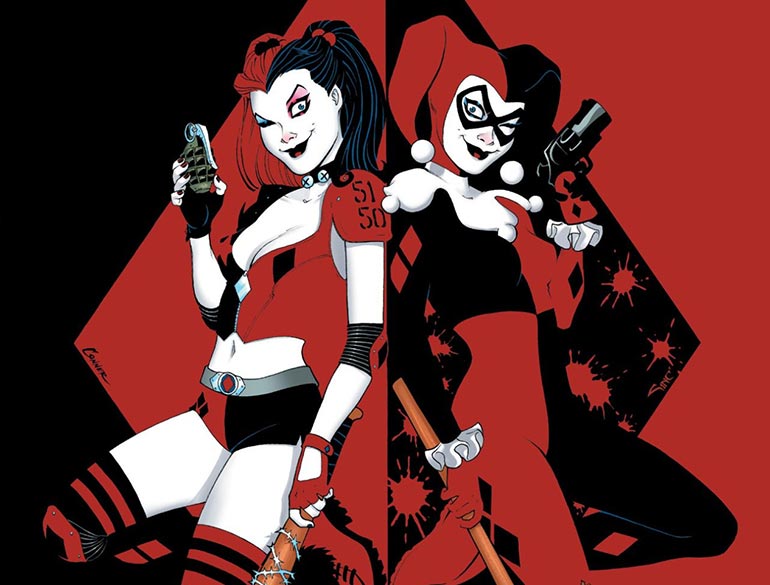 There’s no one in comics like Jimmy and Amanda.

With a single comics week featuring new beginnings, at least one ending, and one book that’s a little of both, Amanda Conner and Jimmy Palmiotti would dominate even if we didn’t love them so much already. Sitting down with Comicosity to discuss — in rapid fire succession — their new releases, we get the inside scoop on the first story for their next ongoing, The Jetsons; the final issue of Harley’s Little Black Book; the start of two new storylines in Harley Quinn (out NEXT week); and their entry in the Kamandi Challenge.

Matt Santori: I want to talk about The Jetsons. The first story making its debut this week is kind of unnerving!

Amanda Conner: Why thank you! [laughs]

MS: How did you come to this translation of the property?

AC: We both loved the Jetsons when we were kids, so we wanted to do THAT, but take it further. Make it fun and just a little more wronger, which is what Jimmy and I really love to do. That’s how the whole Rosie concept came about.

Jimmy Palmiotti: It made sense. We were thinking about Rosie the Robot and we didn’t want to do exactly what the cartoon did, because you can go watch the cartoon, you know?

AC: And they did it so well!

JP: They did it so well. And if technology shows this is where we’re going to be going 400 years in the future… like, where is the world going? I’m a science new nut. I read science and technology news every day. So everything in the book is based on what the world might be one day and where it’s going. 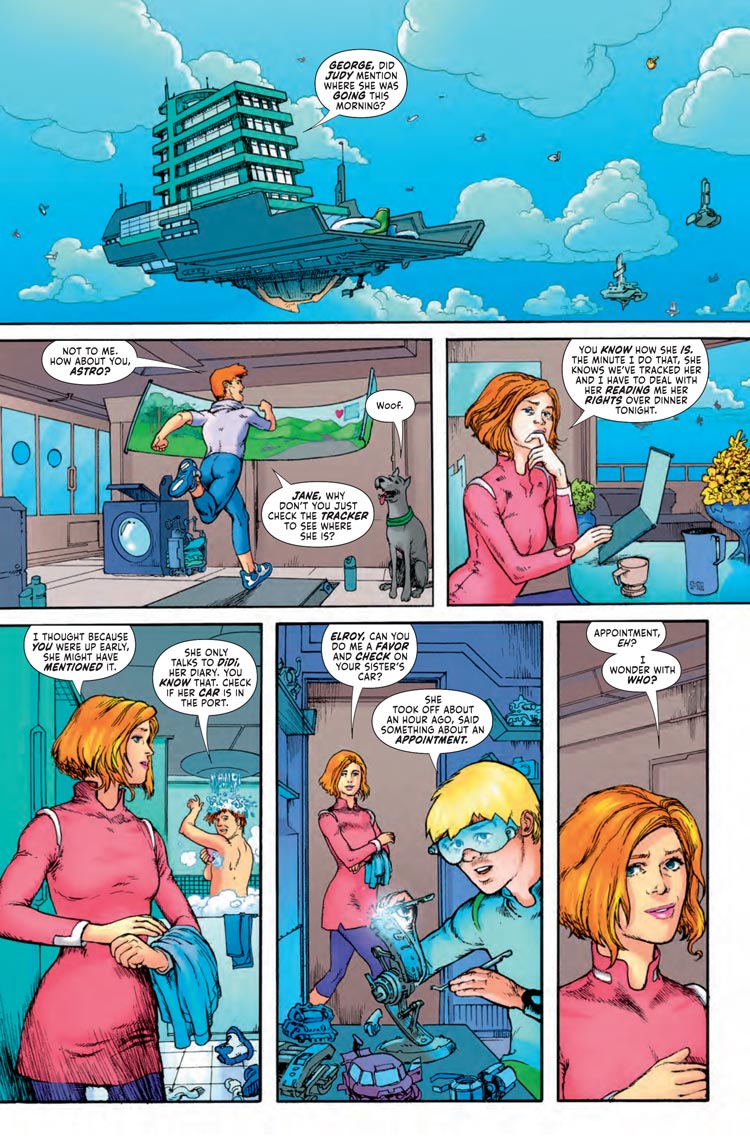 In that short story, we sort of establish what’s happened to the planet, where it’s going, what everybody does. And then the idea of Rosie being George’s mother made us laugh. We thought it was kind of crazy. The idea that your mom never leaves you as an adult is kind of hellish, so we thought it would be fun to put George in hell for awhile.

Even though it’s sweet, it’s still your mom picking up after you — and you’re in your fifties. [laughs] I don’t know if that’s a dream for some people or the worst thing that could ever happen.

AC: [laughs] I imagine it’s different for everybody.

We’re looking at that and the world around them and felt like, we have to take this further. And we have to go a little more dark in some ways, but still keep it light. Pier Brito and Alex Sinclair keep a nice, beautiful looking palette on it. We’re trying it out!

MS: Right. It’s definitely not dark. It’s sort of like Outer Limits “off.”

JP: Somebody said Black Mirror to me and I started laughing. Yeah, that’s usually darker to me, but I get it. 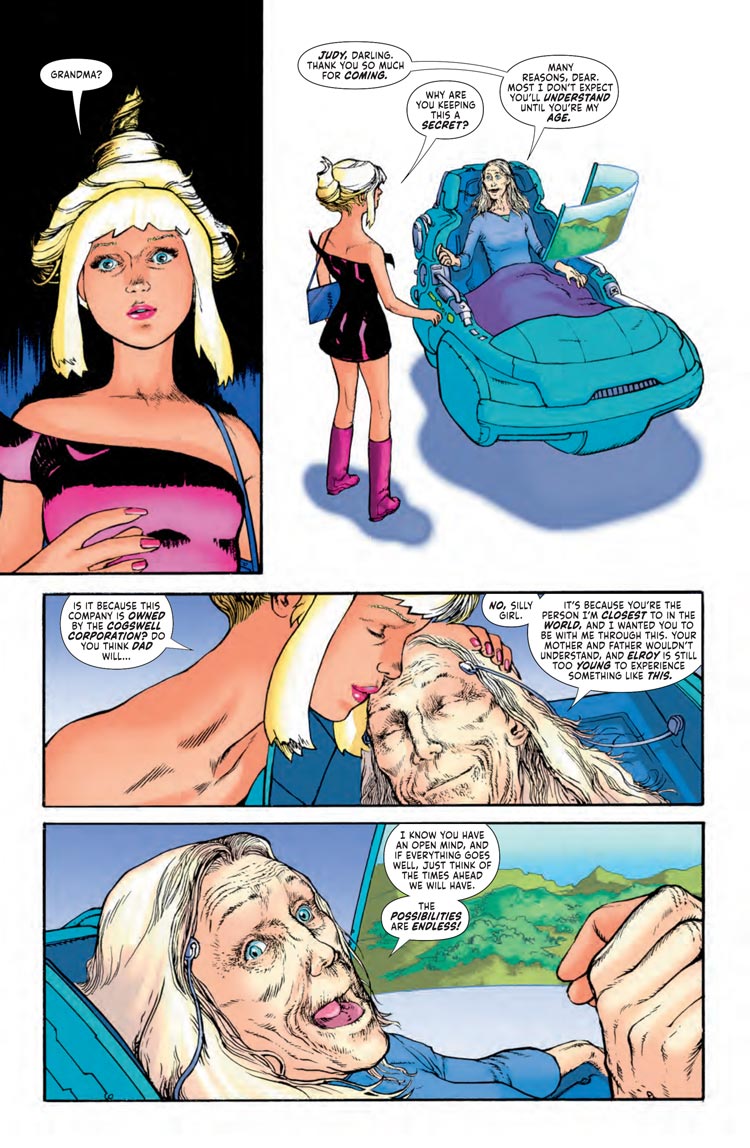 MS: This story has Judy as a central figure. When you get to series, will the entire family be used in point of view, or will we just be seeing it through her eyes?

JP: We’re going to see the entire family’s take. When the original series was created, George and his wife were very conventional. George went to work, and his wife was at home. The kids were at school.

AC: It was very George-centric, I felt.

JP: Yeah, it was George’s point of view.

We open up the series with Elroy and we go from there. But we’re going to get to know all of them and see the world through each of their eyes. It won’t be just George. It will be the whole lot — even Rosie in a way.

I think that’s the fun of exploring it. We don’t want to take you where you’ve been. We want to take the next step and it’s really important with these books to do that.

MS: Cool. Now, you also have a book ending this week with Harley’s Little Black Book #6. And you know, it took me until Emma Houxbois commented the other day: you’ve written an entire series just around who Harley Quinn wants to bang.

JP: [laughs] It’s funny that you caught that.

Well, this issue certainly doesn’t shy away from that, does it?

AC: Yeah! Harley actually gets to do it! Wait. Does she? 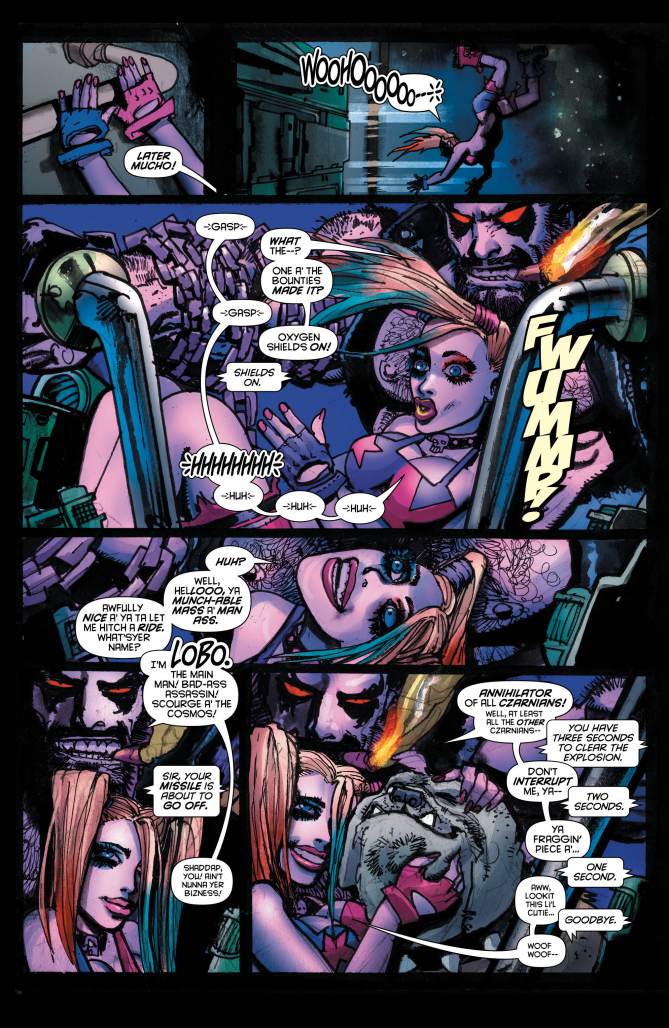 So, it’s her little black book, right? It’s supposed to be her diary of her adventures with other people. When we thought about Lobo, we thought they were really similar in a lot of ways.

AC: I didn’t really get that until we started doing it, and I was like, man. These two characters are a lot alike!

JP: It makes sense that their adventure would become intimate at some point. I gotta say, we were writing it and it’s probably the easiest Harley book we’ve written. We were just laughing out loud and saying, “Oh no. We HAVE to go there.” We just kept saying that and waiting for DC to say, “You can’t do that.”

And the funny part was, there was nothing DC said we couldn’t do. And then Simon [Bisley] took it to another level, and thus the little red flags that run around in the book at one point.

AC: Yes! The little red flags are easier than trying to tell Simon, “Oh no! Don’t do that!” [laughs]

JP: It’s a fun and unique book. I think the classic Lobo fans are going to be REALLY happy with it, and Harley fans are going to have a new appreciation for Lobo, if they didn’t have one already. Honestly, if I was a fan, I’d be laughing my ass off over it. I just think it’s going to hit people the right way.

Or they’ll get angry and we’ll become the internet’s horrible people. 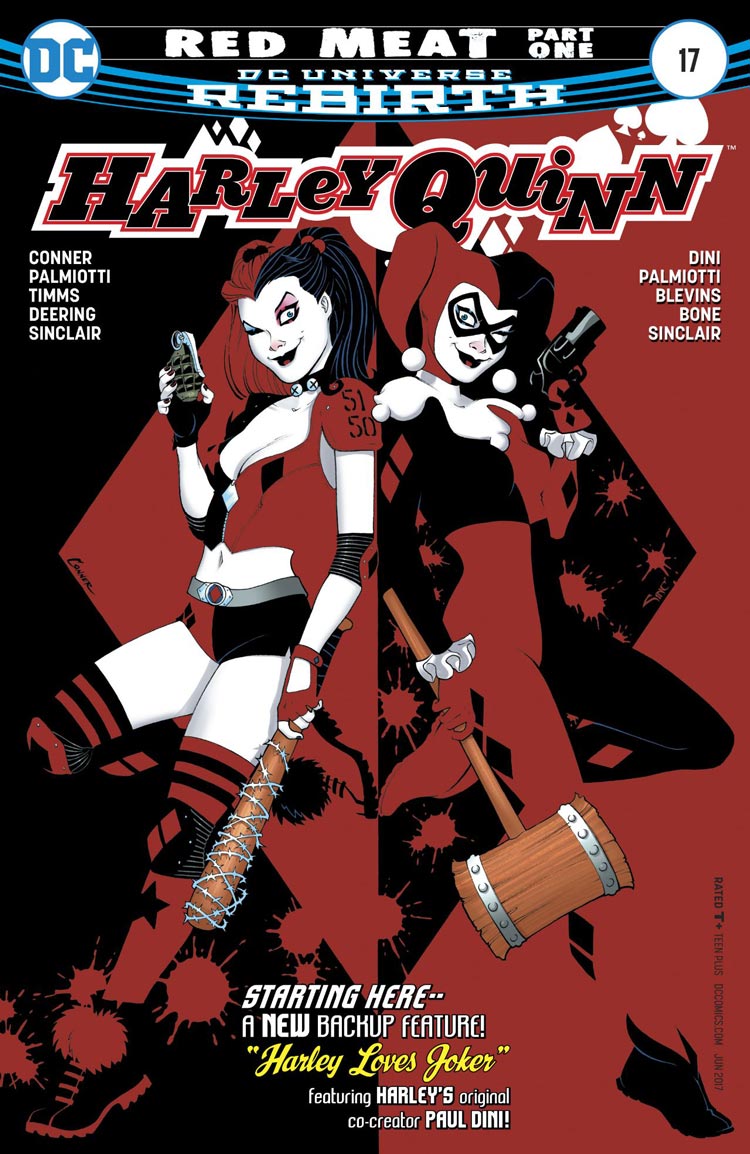 MS: And you’re also launching a new storyline in the regular biweekly Harley Quinn title, with her investigating the disappearances of homeless people. What inspired that story?

JP: It’s kind of a funny story. We were in Woodlands, and they have a homeless situation. There’s homeless people all over the place. It’s kind of sad, but they’re all ages — young, old, in all kinds of different situations. Some with mental health issues, some runaways. There’s a whole lot of things.

JP: We were talking with some of the locals, asking how did they deal with this situation? Why don’t they just build shelters? And the answer was, they don’t want to live in shelters. They don’t want to be there. They want to have their freedom.

I made a joke that the only way for the city to get rid of them is to have cannibals come in and eat them all. It was just some random thing we were laughing about, and then we went, “hmmmmmm.” You know, that’s kind of a fun storyline. Like the Mayor of New York can’t figure out what to do about the homeless situation, so he hires cannibals to come in. And eat them.

AC: A lot of horrible stuff happens in a Harley comic!

JP: Exactly. So, Harley goes after them, going undercover to try to flush them out. And then the story gets even crazier.

We’ve had it in the last couple of issues for a couple of pages, here and there, and now we’re dealing with it head-on in #17, 18, and 19. And then we have the back-ups starting with this issue as well. 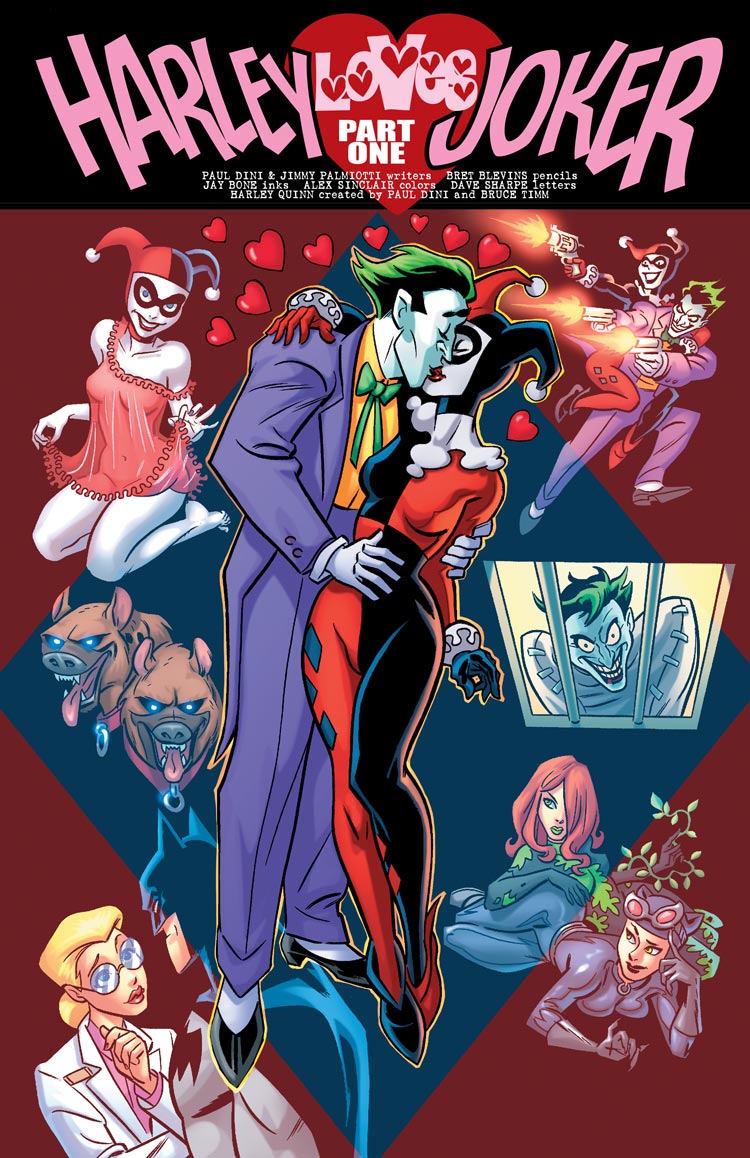 MS: I was just going to ask about that. So, how is it writing classic Harley Quinn with Paul Dini and how did that come about?

Honestly, it was an idea we were bouncing around, like, what if Bruce Timm and Paul Dini did back-up stories with classic Harley — a Harley Loves Joker type of thing. Bruce Timm was too busy, and Paul and I started talking on Twitter. Then we came to the point where we pitched it as a back-up story. We got Brett Blevins and Jay Bone and Alex Sinclair. And they went for it.

It’s fun to mix it up and throw people off. To try something new with the book. That’s what we’re always trying to do. We’ll see how people receive it. We have to experiment at all times.

People who love the animated series are going to love this. It’s visually similar, but a little more lush. And has the tone of that. It happens in past, at a time when the Joker and Harley were in a relationship and going on their little crime sprees around Gotham. 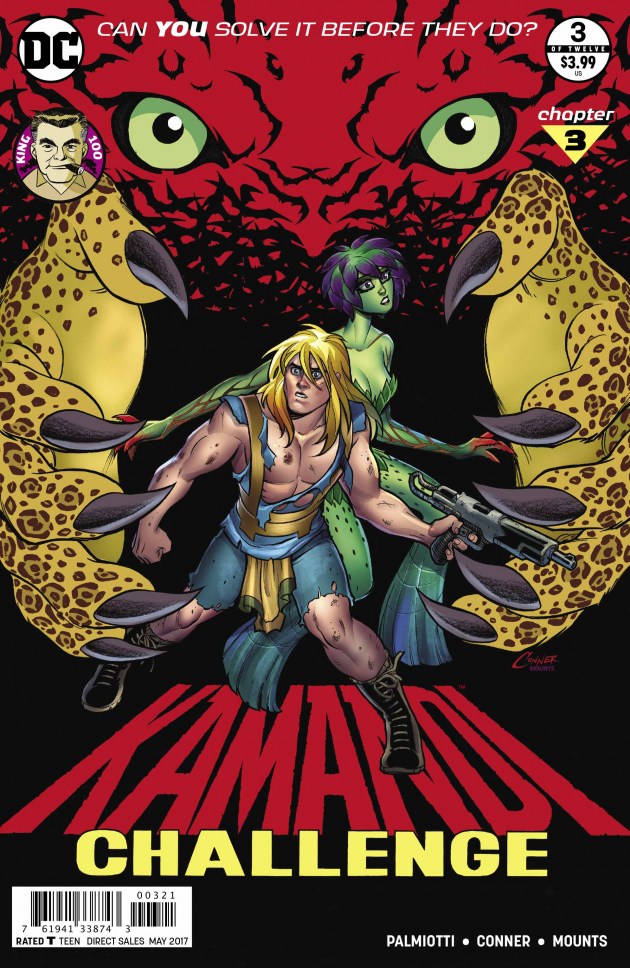 MS: Lastly, I just want to say, your Kamandi Challenge #3 is really wonderful. That must have been a lot of fun to work on.

AC: I had a blast on it. I don’t get to draw interiors that much anymore, and I didn’t realize how much I missed it until I started doing it. I had never drawn Kamandi before. I didn’t even read Kamandi much when I was little. And I didn’t realize that he was going to turn out to be one of my favorite characters to draw.

That and being able to draw humanoid, upright, and walking animals? I just had a tremendous amount of fun on that book. I want to do more of that.

JP: And for me? I got to work with my favorite artist.

JP: I got lucky, because we got randomly picked. The guys at DC were laughing when Amanda and I got matched up as writer and artist. It was random. We didn’t know who we were going to be teamed up with. Then they were like, “Well, you’re kind of stuck with Amanda!”

And I was like, “Perfect.” Because I know what she likes to draw. And that issue is a whole lot of what Amanda likes to draw. Everything I wrote was basically that. Humanoid characters. Big cats. All of it.

The eight-page introduction to The Jetsons, ongoing series coming soon from DC Comics, can be found in today’s Booster Gold/The Flintstones #1.

And Jimmy Palmiotti’s collaboration with Paul Dini begins on the Harley Quinn back-up series NEXT week!