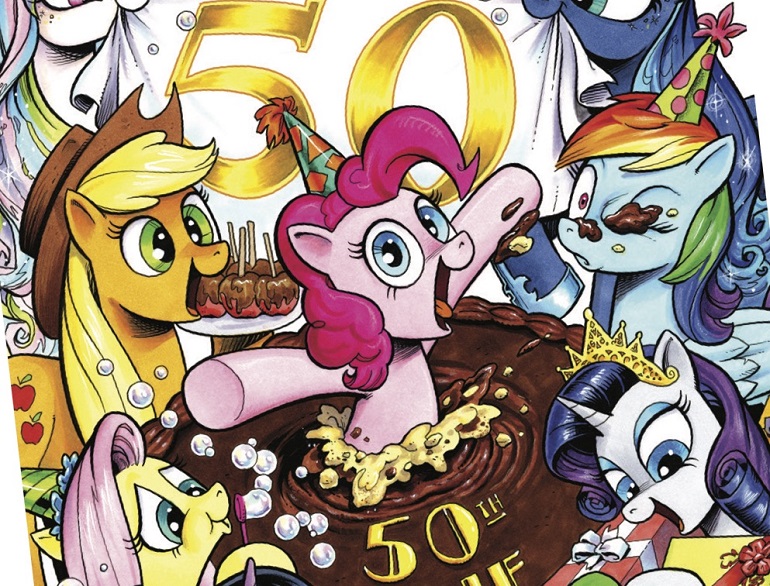 I used to wonder what friendship could be, until you all shared its magic with me. You know what that line is from. It’s in your head now, and you’re welcome. Today, Comicosity is proud to present writer Ted Anderson and artist Andy Price talking about the final issue of the “Chaos Theory” arc, the landmark MY LITTLE PONY #50. 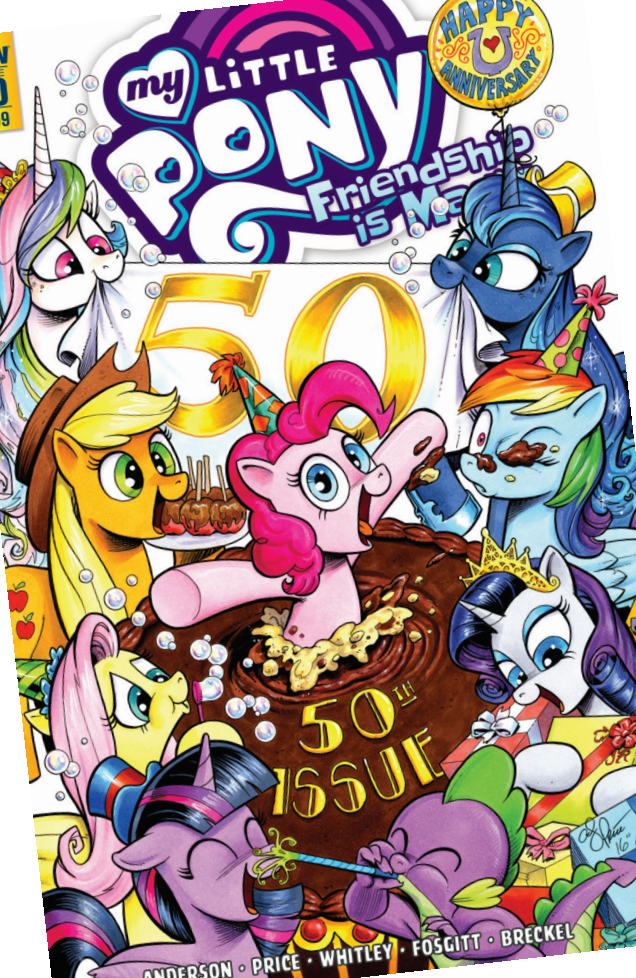 Aaron Long: Chaos Theory wraps with the landmark 50th issue of My Little Pony. Knowing this arc was going to finish in such a big issue, was the decision say to center the arc round the iconic Discord?

Ted Anderson: For me personally, I liked the idea of doing a big story centered on showing how a former villain of the series has reformed and changed, and show the effect the characters have had on others. I also wanted to provide something of a retrospective, showing where our characters have come from and how they’ve changed; there are a couple sequences in the issue where we look back on previous adventures, both in the comic and the show. This issue isn’t the end of the My Little Pony comics, but it is a landmark issue, and I wanted to make it a commemoration of what’s come before!

AL: With this arc you have had Discord pull a 180 and become Accord. What have been the most fun aspects of flipping this mainstay character around?

TA: I haven’t actually written anything with Discord before, so it’s been doubly fun: first, getting to write Equestria’s biggest trickster; second, writing Equestria’s biggest square! Discord has gone from being villain to friend and quasi-hero, but kept the, chaotic energy all along—and now that he’s changed, our heroes are remembering how much they liked the old wacky Discord. Flipping him around like this makes him a villain again, but in a very different way.

Andy Price: With Accord, I wanted his design to reflect his switch to order, and in every manner- clothing, demeanor, physical stature. Unlike Discord, Accord was drawn standing upright, with little to no curve to him. His scraggly beard was exchanged for a dapper mustache, and I made sure his clothing was orderly and tame. His wings are hidden to separate his look as well. The monocle and derby, with his waistcoat and pocket watch reflect a completely radical departure from the whackiness that is the character’s trademark. However, I gave one tiny clue to the fact that he still is a threat, although only eagle-eyed observers will spot it: Accord’s wolf-head cane is the same as carried by Lon Chaney Jr’s character in 1941’s The Wolfman. It’s a physical representation of his submerged side, and shows that he’s more of a threat than what he appears to be. 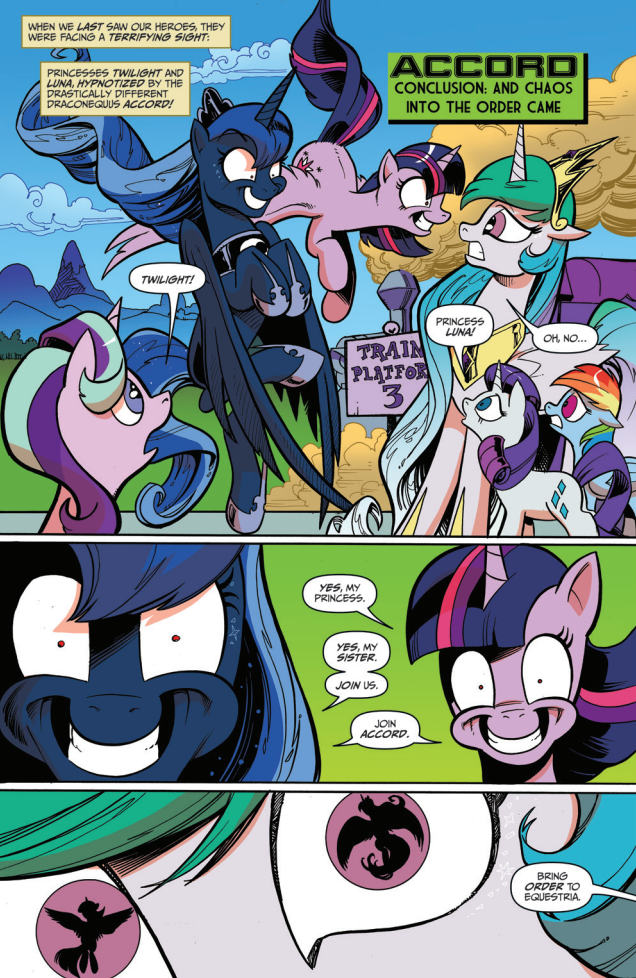 AL: Issue #49 ended with two of the most powerful My Little Pony characters in Equestria under Accord’s influence. Can you discuss what the rest of the characters will be up against as this story comes to a close?

TA: This may be overblown for a series about colorful MY LITTLE PONY characters, but I wanted to end 49 on a genuine cliffhanger and a moment when the stakes are as high as possible. It’s a moment of great crisis, and I wanted to send our heroes back to basics in order to save Equestria. But the real threat in this story arc isn’t order—it’s unfriendliness. And our heroes have had plenty of practice fighting that!

AP: For the most part, the cast kind of reviews the basics of who they are, story-wise. Visually, there are some nice tips of the hat towards things that have come before, which lends a nice touch of history. The rest of the MY LITTLE PONY characters are dealing with not only trying to discover a way to stop Accord’s twisted logic, but they also have the threat of his spreading influence to deal with.

AL: Andy, you’ve drawn your fair share of Ponies, what parts of the Chaos Theory have been your favourite to pencil?

AP: Accord has been unique and a fun challenge to make sure he comes across as anything but Discord. There are some flashbacks which were delightful to revisit. There’s a two page spread of Accord’s mind that I colored by hand, which was fun.

AL: Who are your respective favourite MY LITTLE PONY characters to write/draw and whose personality do you identify with most?

TA: I’ve always said that Rarity is my favorite character, but I identify with Twilight the most. But the last couple issues I’ve written have given me a soft spot for Starlight Glimmer, too, as a reformed villain trying to make things right. And any issue with Applejack is always a treat—her accent is so much fun to write! 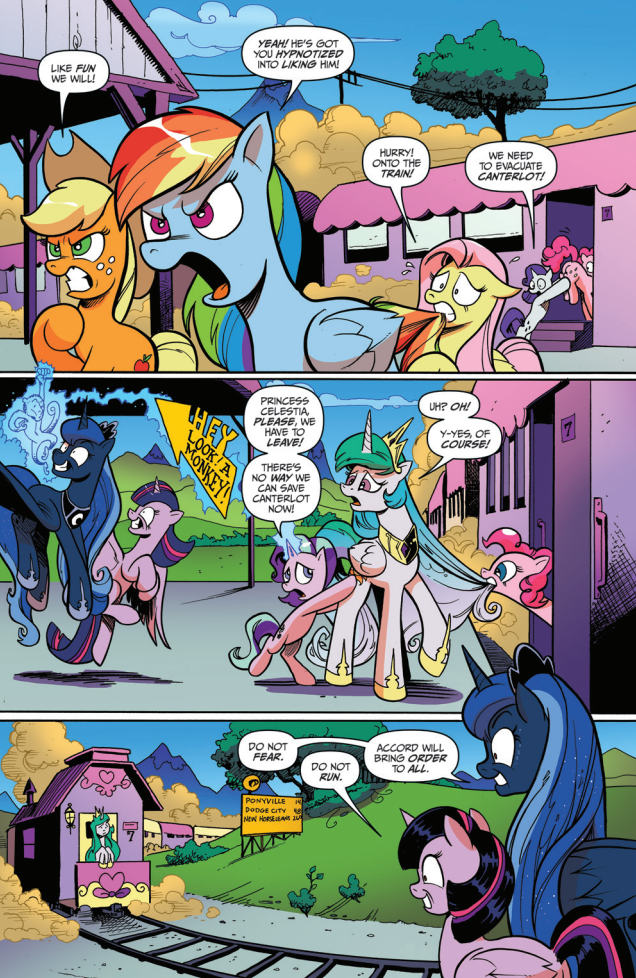 AL: I watch a lot of My Little Pony with my daughter and my favourite character is Big Macintosh. So, I have to ask: is this the arc where Big Mac saves the day and becomes one of the greatest heroes Equestria has ever known?

TA: Not this time! But as we all know, Big Mac is the series’ true hero.

AP: Big Mac is actually an alien spy. The real Big Mac has been missing since 2014. The invasion will begin any day now.

AL: Any final words for readers about My Little Pony #50?

TA: I hope everypony enjoys it! There’s more stories to come, and I’m proud to be a part of it!

AP: It has been an incredible joy to work with these characters, ever since issue 1- and the last page of issue 50 shows that. I have more plans for the My Little Pony characters, and I hope to see another 50 issues!