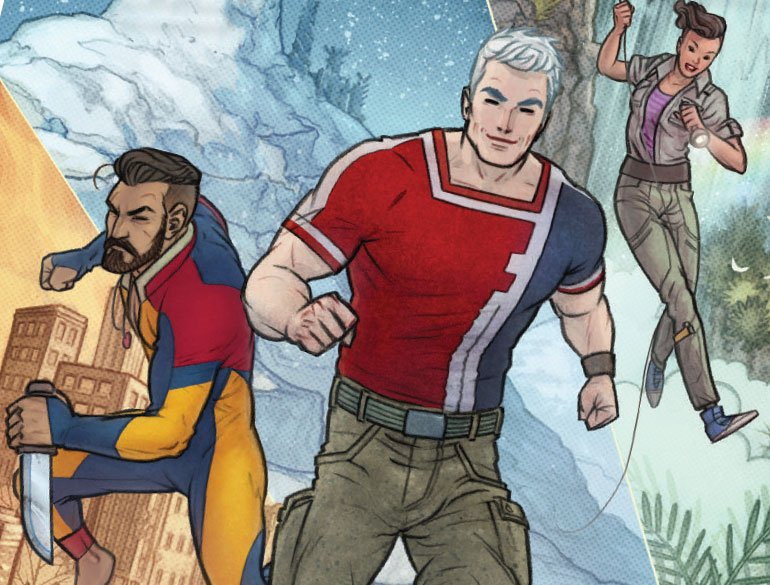 But what about Lance Valiant?

One of Canada’s earliest Golden Age heroes — and one whose absence from the comics scene has been protracted enough to return him to the public domain — Lance Valiant, a.k.a. Freelance, has returned to the stands at last from Canadian publisher Chapterhouse Books. And leading the charge on his return are writers Andrew Wheeler and Jim Zub, with artist Vaneda Vireak. Wheeler sat down with Comicosity for a two-part interview to discuss the Canadian legend’s return, how the opportunity to return him as a gay man presented itself, and how the first volume sets up a brand new adventure for Lance and his team. 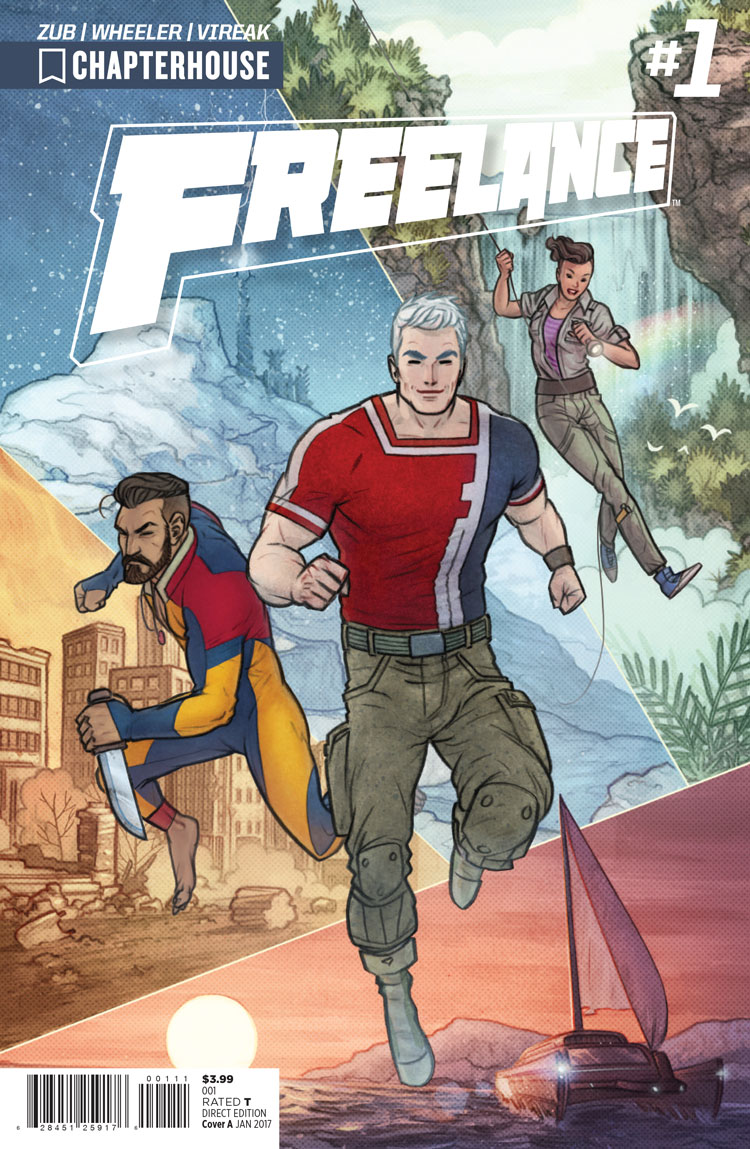 Matt Santori: How did you come upon the character of Lance Valiant for the book? Obviously, Freelance is a little obscure in Golden Age comics history…

Andrew Wheeler: It was actually Chapterhouse that came to me and my co-writer, Jim Zub, with the idea. They’d been looking at this group of characters from the Golden Age of Canadian comics, that are referred to as the “Canadian Whites.” It’s a bit of a peculiar phrase, but it refers to comics produced in the Canada during World War II, when importing comics was considered a luxury and was not allowed.

In order to serve the domestic Canadian market, they started publishing these new characters. The first Canadian super-hero was a guy named Iron Man — completely different from the Marvel guy. And Freelance (Lance Valiant) was the second Canadian super-hero ever created.

In creating this Canadian universe of super-heroes now, Chapterhouse wanted to harken back to the classic days, and bring at least one hero from that era up to the present day and reinvent them for a modern audience. Since Iron Man was off the table, Freelance was the guy they picked. 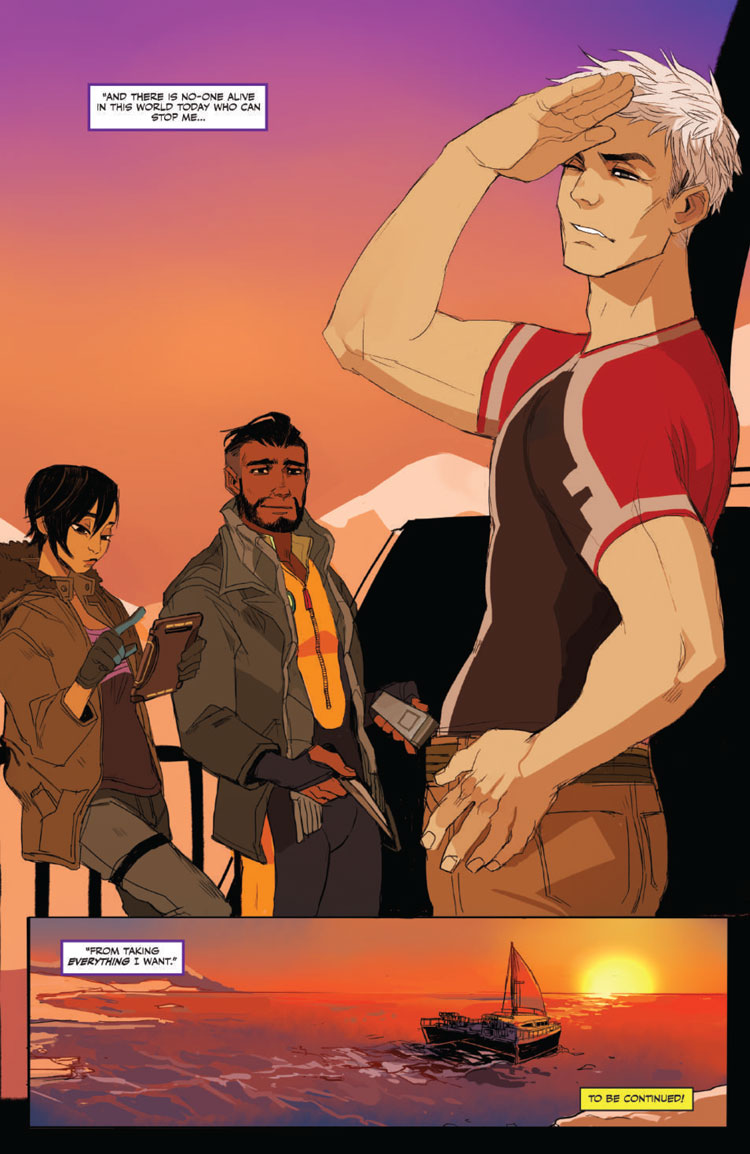 MS: I think this focus on Canadian characters really separates what Chapterhouse is doing from a lot of other shared universe publishers — and Freelance especially. Comicosity is a Canadian-owned site, so we’re really curious how much of a focus that is for the company, if you can speak to that.

AW: The company is really the first Canadian publisher to try to do this shared super-hero universe thing, alongside the creator-owned books they also publish. I think a lot of it is taking these Canadian books and characters and creating a legacy that was never there.

The history of Canadian comics is really sporadic. So, you have these characters from the 40s, but you also have characters like Captain Canuck from the 70s, Northguard from the 80s, and Human Lizard from now. They’ve all sort of sprung up from different attempts to create an indie comics movement and a super-hero movement in Canada. So Chapterhouse has acquired the rights to all of these and brought them together with characters like Freelance, who are in the public domain.

It’s really about bringing them together like a Marvel or DC, if there had been such a continuous thing in Canada. And honoring characters who represent the Canadian ideal.

In the case of Freelance, the character himself is not born in Canada. He doesn’t have Canadian citizenship. He doesn’t have any citizenship, in fact. But he represents a very Canadian ideal of self-sacrifice and going out into the world, trying to fight wrong-doing wherever you see it. It’s that sense of how Canadians like to see themselves — this kind of aspirational ideal.

He fits really neatly into that, even though he, like I, was not born in Canada. 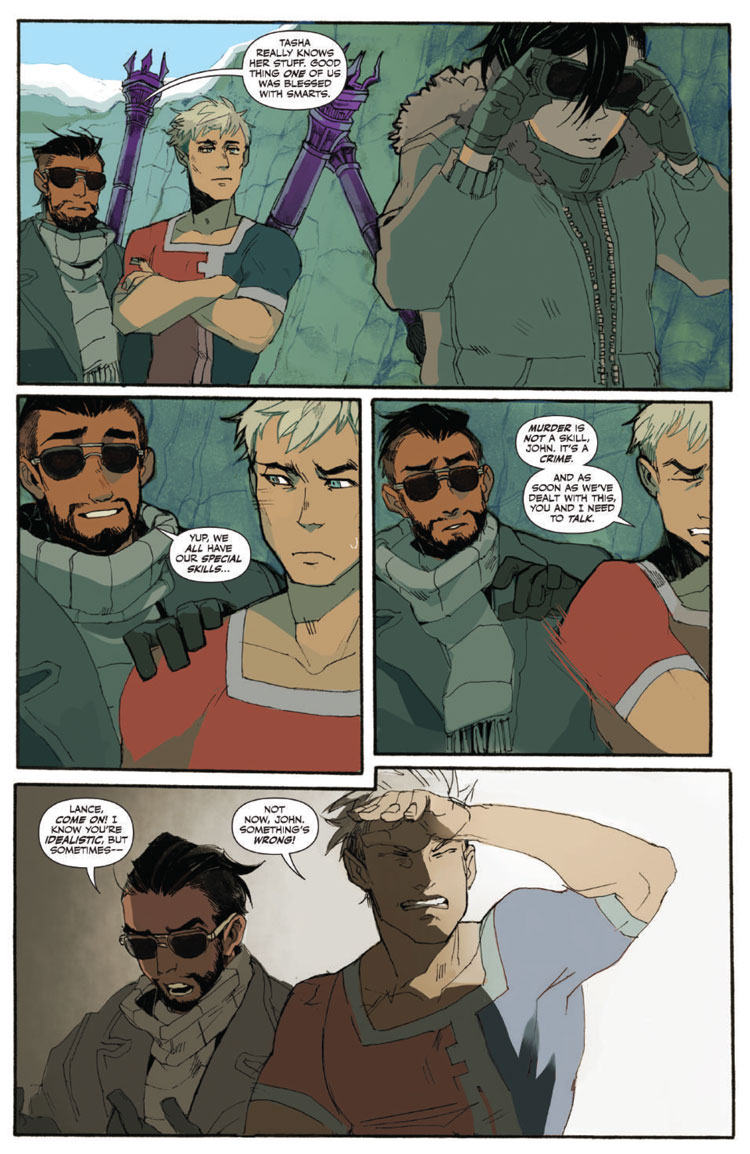 MS: That really stood out for me in the four issues being compiled into the first collection of Freelance. Valiant almost out-Supermans Superman here.

AW: Lance definitely fits into that paragon mold of heroes. He is a Superman. He is a bit of a Doc Savage character, too. That sort of square-jawed hero that existed early on and represented a set of ideals, ready to put himself in the line of fire first.

But also, there’s that very Superman ideal that he has to be that good because he has all that power. He’s stronger than anyone else.

Lance is not exactly Superman. His experience is rather different. He doesn’t know where he came from. He’s in constant fear that maybe he hasn’t always been a good person. He doesn’t know what he’s done in his past. He’s trying to live up to being as good as someone with his strength could be, because he doesn’t know who he was.

And that creates this difficult distance between himself and the humanity that surrounds him, which John represents. John is really this reformed bad boy character, but he represents humanity at its best and humanity at its worst. Which is something Lance finds very attractive and compelling. But he’s also slightly afraid of it. 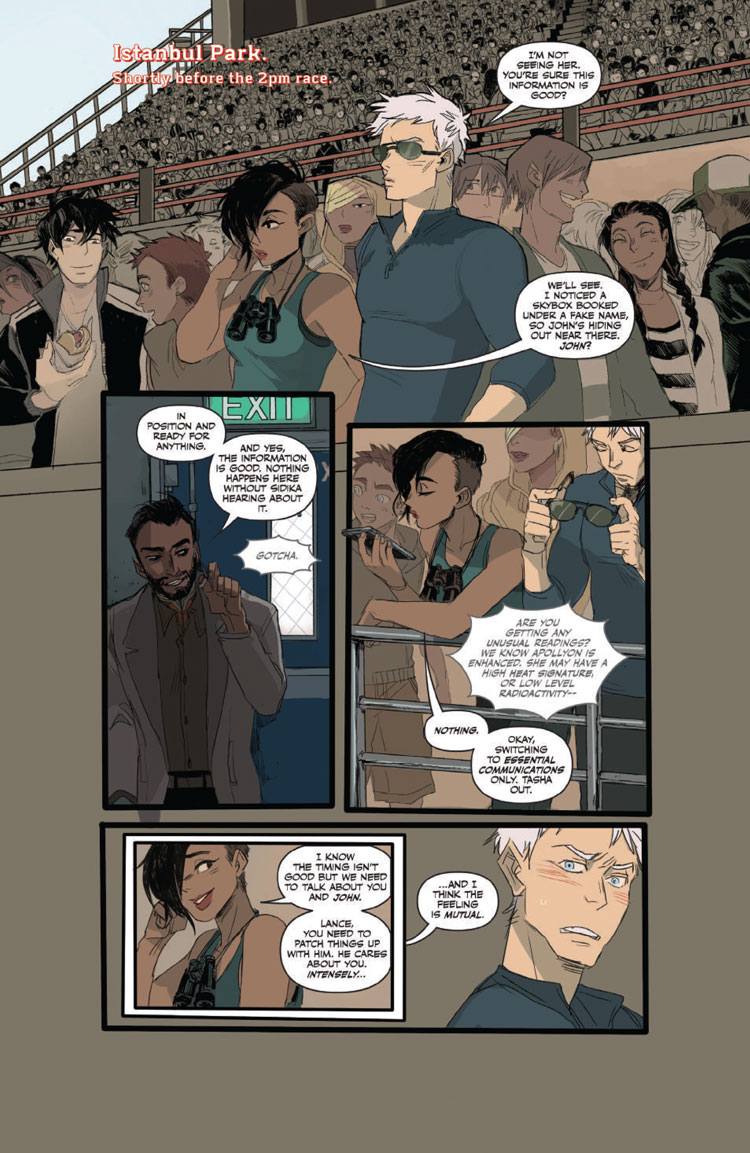 MS: I don’t want to get too into spoilers for readers who haven’t read the four issues yet, and may want to check out the compilation, but there is a scene toward the end that is pretty important.

We’ve seen it in a few books of late, but it’s this idea of the crescendo — the Big Gay Kiss — that you don’t get in comics very much. And you’ve woven it into the plot here pretty importantly.

AW: Yeah, it’s interesting. The character as originally conceived in the 1940s by Ed Furness and Ted McCall was not gay. But he was quite a campy character. The men were really beautiful with these gorgeous eyelashes and these Teutonic jawlines.

So, there’s something really homoerotic about the original comics, without speculating on the creators’ intentions at all. But I think it’s quite something to celebrate when you discover this kind of male beauty in vintage comics. It’s there in a lot of comics of that era, I think.

Chapterhouse wanted to create a universe that reflects the world that it is today, rather than the world as it was conceived by creators in the 1940s or the 70s. So, they thought, “What if we made this character gay? What would that mean?” And they approached me as a gay writer and Jim Zub as an experienced comics writer to collaborate on bringing that to life.

It was important to both of us that a kiss be part of that first story. If we had gone to Chapterhouse with this outline and they’d said, “We want this storyline and the gay dollar, but not the kiss,” we would have had to walk away. That would have been baiting the audience in a pretty significant way. 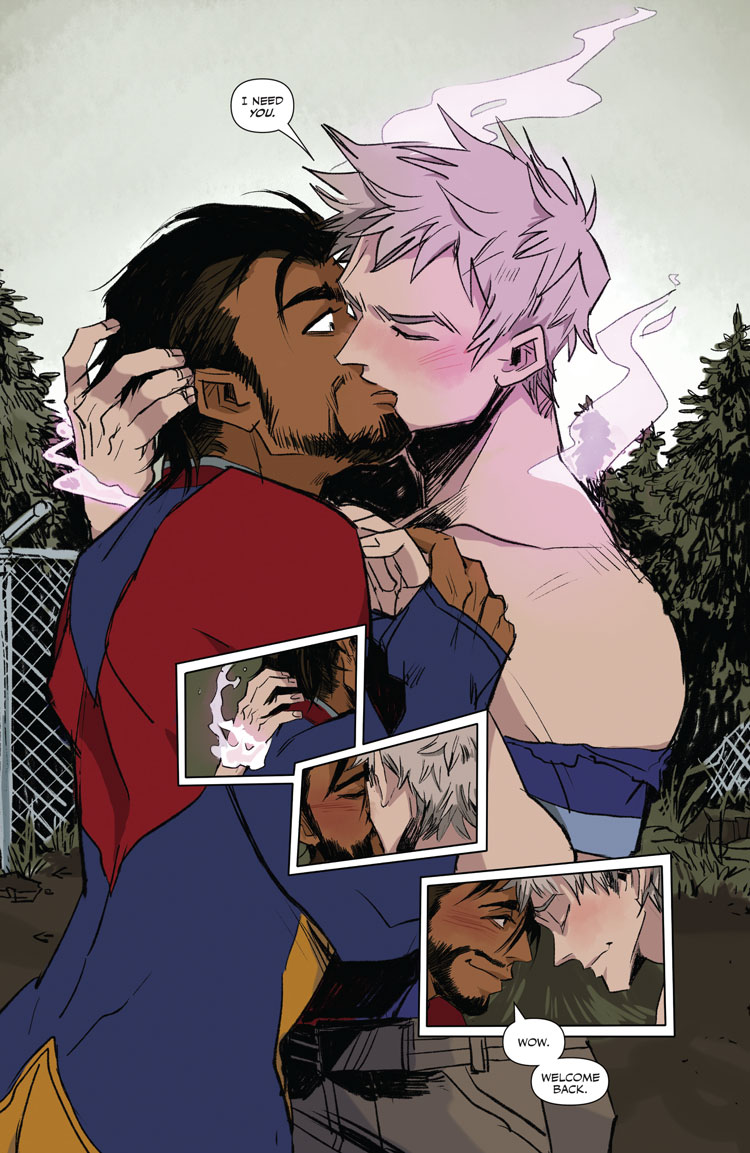 Because it is a romance story, and the kiss as written is so much a part of the action of the story. It’s not just a kiss for the sake of having a kiss. It’s part of the journey that both Lance and John are on as the story progresses.

That’s not to say there won’t be other kisses in future storylines that are entirely gratuitous, because that’s fun, too. But it was really important for me to say, “This is a gay character.” without any lip service.

Although “lip service” may not be the right phrase, because we literally are paying lip service. [laughs]

It was really important for me to get that on the page, and give the audience what I as a gay audience would want to see, too.

Come back tomorrow for Part 2 of this conversation for more on the characters and world Freelance is re-introducing to modern audiences.