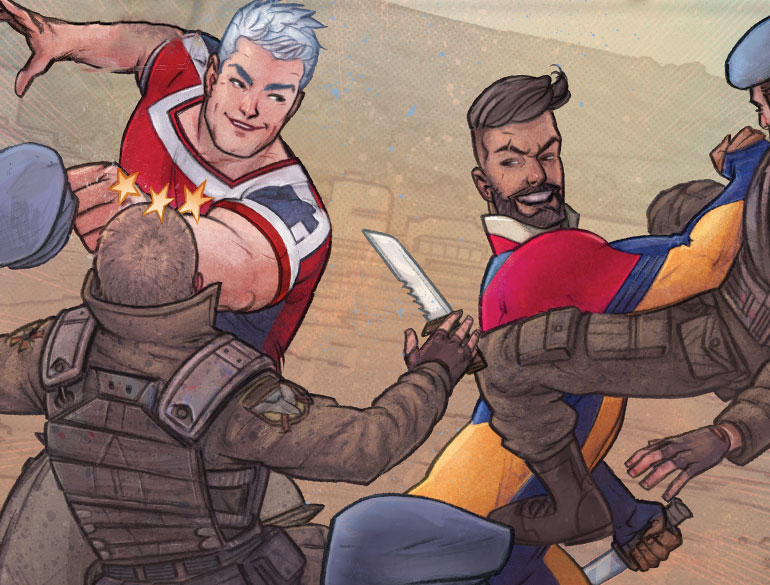 Yesterday, we sat down with writer Andrew Wheeler to chat about the first volume of Freelance, Chapterhouse Books’ revitalization of Golden Age hero Lance Valiant. No stranger to analysis and criticism of queer representation himself, Wheeler continues in conversation with Senior Editor Matt Santori to chat about writing gay characters, introducing their sexuality on the page, and how the art by Vaneda Vireak helped develop that representation. 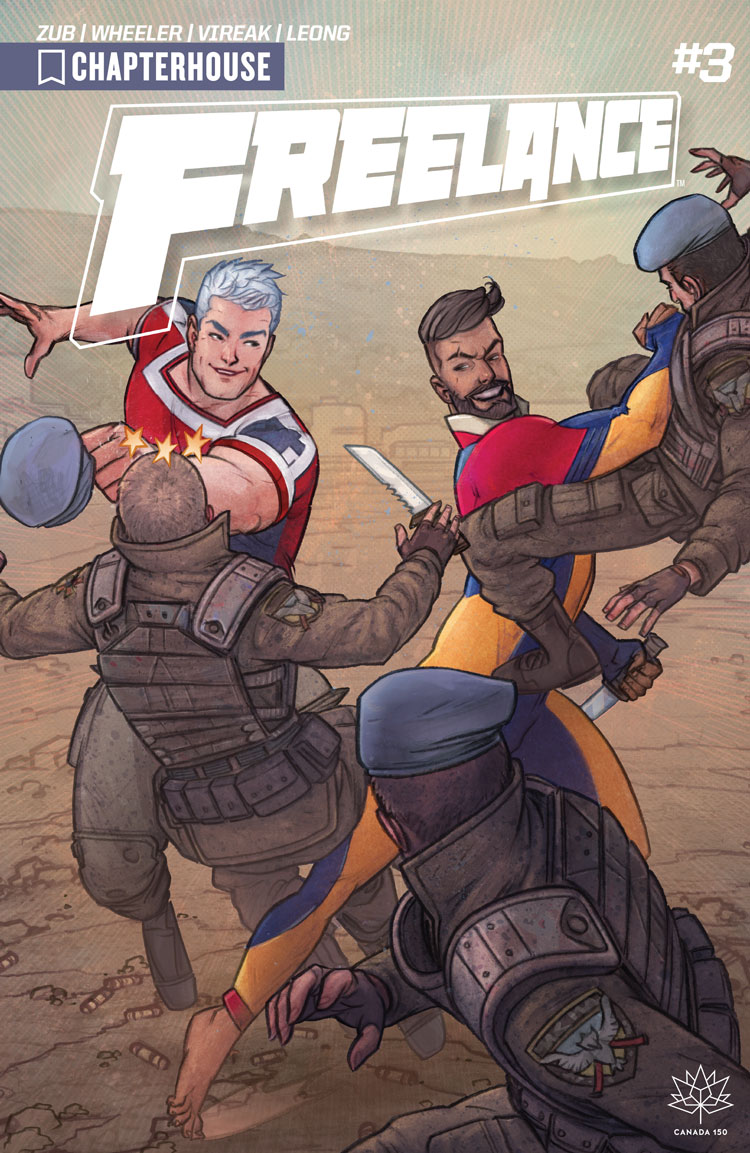 MS: Not to get too off-track, but this is a great opportunity in talking to someone who hasn’t just written comics, but also written extensively about comics — and specifically about queer representation in comics.

There is a lot of discussion about introducing gay characters and how one should go about that. Is it a big reveal? Should it be subtle? Should it be handled matter-of-factly? Does it need to be stated outright?

AW: It was something I had to think about a lot, because when you’re doing a book like Freelance, you could read maybe even the first three issues of the story and not acknowledge that Lance is gay and John is bisexual. You could very easily say, “Oh, well, they’re just bros being bros.”

There’s this constant worry as a writer that you want people to know. You want to say it, but you don’t want to contrive it. So, the question was, do I have an obligation to use the word “gay” or the word “bisexual” in the first issue?

I chose not to do that, but it was a question that plagued me throughout. It’s kind of a situation where you feel like it’s a compromise to do it and a compromise not to do it. And in this case, I knew that the fourth issue would settle it. No one is going to think they’re just bros macking on bros.

Then the question is what other ways do I sell him being gay? This is a book about a guy who exists outside of culture, so there aren’t really pop culture ways that I can establish Lance as a gay man. He doesn’t go to nightclubs and he doesn’t live in a gay village. He doesn’t watch TV or listen to the music that I listen to. He’s a focused hero, and we don’t really have time in the four issues to explore his private life in a significant way.

But hopefully, as you read the four issues, you get it. It’s not a book about being a gay man in contemporary society today. It’s a very genre book. 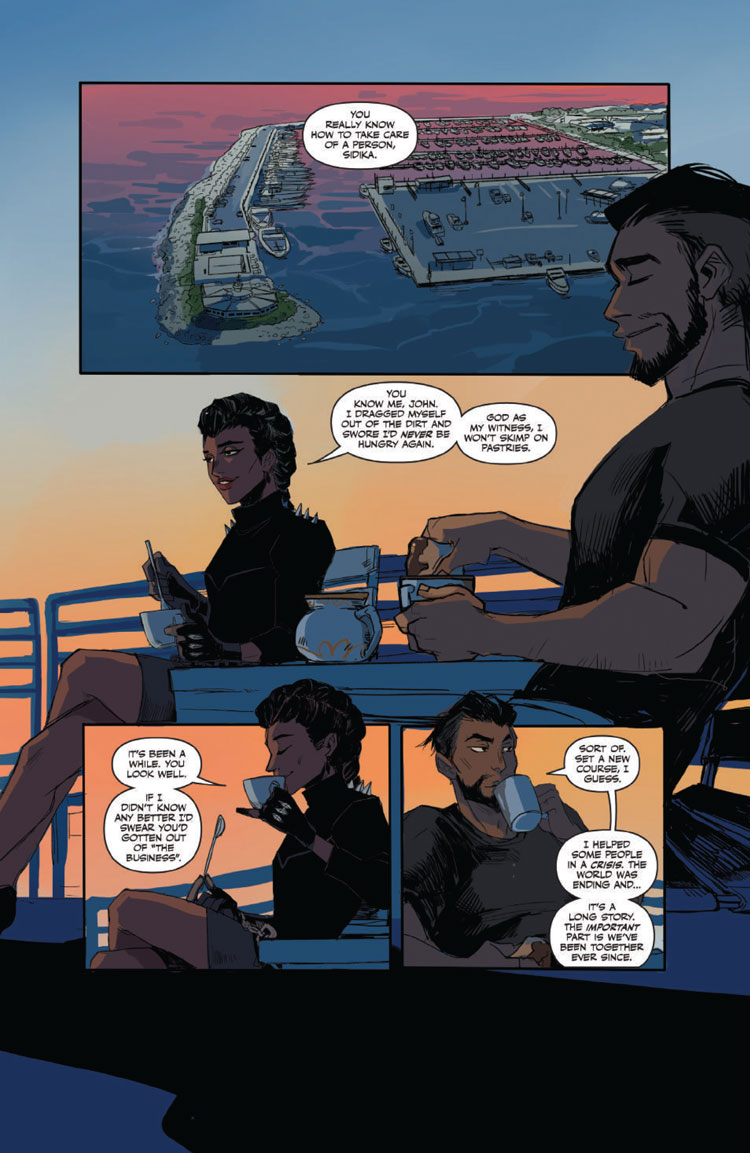 MS: I think you get a lot of that in the first three issues, not directly from Lance, but through John’s gaze.

AW: John is such a fun character to write. He has grown up with a very disadvantaged life, which we’ll get to explore more as the series heads into its second volume. He is someone who came from nothing and struggled to find his place in the world.

He understands things in a way that Lance does not. He understands that if you live in a world that doesn’t treat you fairly, you need to take things rather than expect them to be given to you. He comes from an entirely different universe than Lance.

But at heart, John is this positively upbeat romantic person. He’s utterly devoted to Lance and Lance’s vision of the world, even if he sees different mechanisms of building that world.

So, it was important to me to open up the very first page of the first volume of the book with John describing Lance with these glorifying terms: he’s “more than human.” He’s “beautiful” and “captivating.” That first page is a mission statement that this is a book where a man can find another man beautiful. That’s the driving force for what these characters are and how this story will progress. 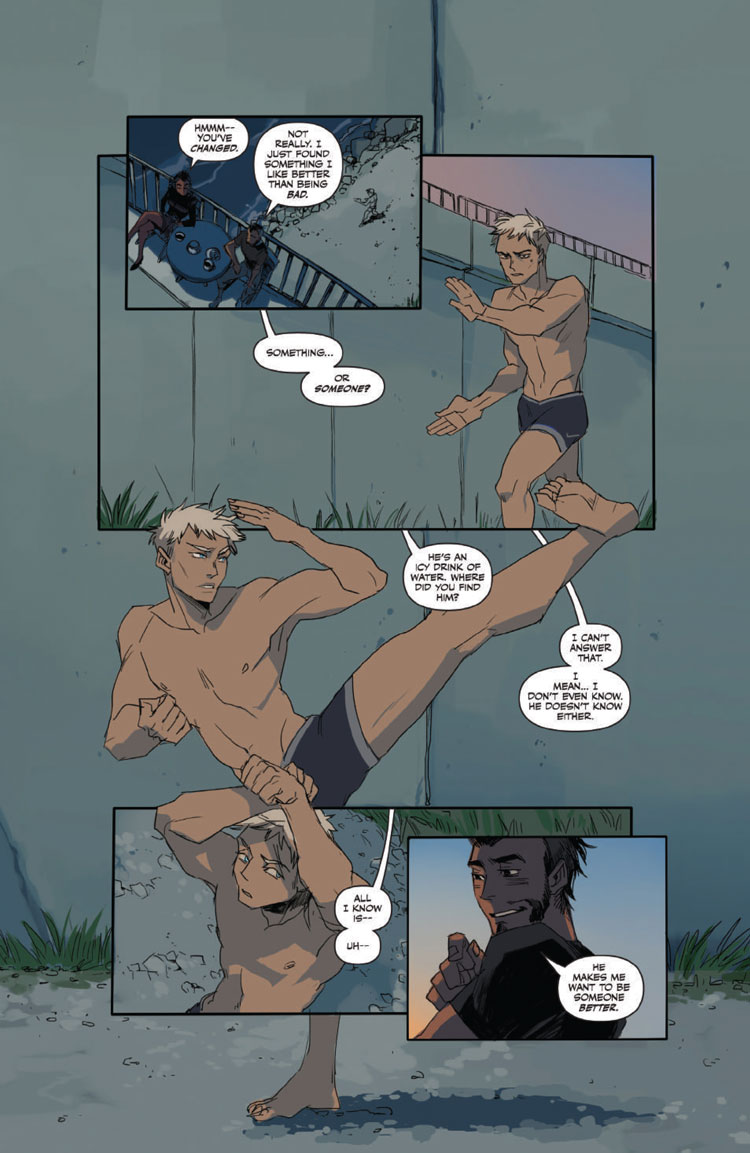 MS: So key to all of this is the art from Vaneda Vireak. From the very first page, you’re really getting more of a sense of Valiant from John than you’re getting of Valiant himself. And so much of that is in the art.

AW: With Vaneda (and Cindy Leong, who provides finishes from the second issue onward) onboard, we didn’t want a house-style super-hero book. We didn’t want it to look like the grim-and-gritty, grinding-your-teeth-together art that a lot of super-hero books embrace. We wanted that comic aesthetic informed a little by manga and a little by cartooning.

Vaneda actually comes from webcomics, and has a series called 51Hundred that Chapterhouse is going to be bringing into print as well. Her style is such a breath of fresh air for super-hero comics. It has a glamour and vitality to it.

Her line is a little unexpected in charming and sexy ways. It makes the characters as beautiful as they need to be, but also as human as they need to be. These are not untouchable Greek statues of men. This is a much more familiar sort of aesthetic. 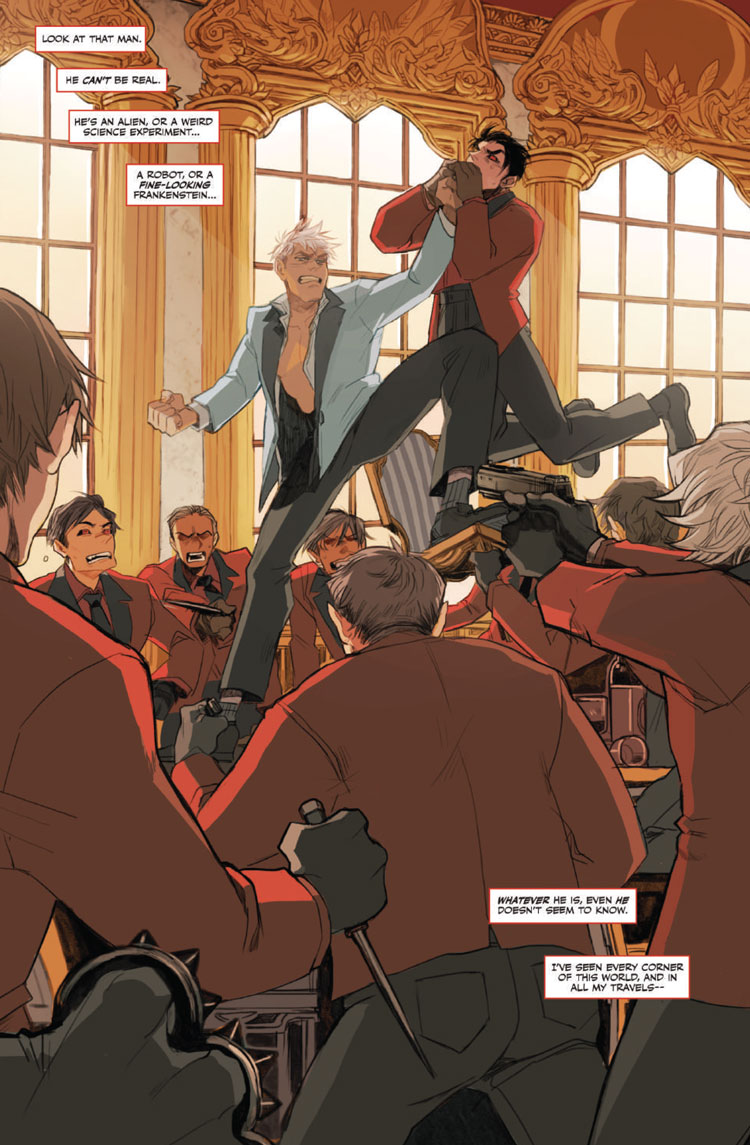 MS: I also want to talk about Natasha. She’s a really interesting factor in the relationship among the three, almost the leader in some ways.

And her background is really important too, as more Canadian creators have made a point of bringing in Indigenous characters to comic narratives.

AW: Yeah, in the original comic from the 1940s, you had a similar dynamic between the characters of Lance, John, and Natasha — except that it was Natasha that was in love with Lance, and now it is John. There was some talk early on that Natasha might have feelings for him too, but I didn’t want to do that. It felt like an unnecessary complication.

And in the original comics, Natasha was a Russian spy, so when you combine her name with that background — well, maybe in the 40s that still felt like it was worth exploring, but now it’s such a cliché. We wanted to do something fresh with it.

AW: Ha! Yeah, in our story, she had gone undercover as a Russian spy, and we’ll see a bit of that in future volumes. But now, her name is now shortened to Tasha. She’s an Inuit woman and a genius scientist. And she is by far, the smartest one in the group and probably the smartest person in the universe that we’re building.

I wanted to have a character in the book that was Canadian, because otherwise, we’d be one of the only books in the Chapterverse that had no actual Canadians in it. It was important to me that she was an Indigenous woman, especially as one of the smartest and most capable people in that world.

It allows us to present a picture of an Indigenous person that we don’t get to see very much. It takes us away from a lot of the stereotypes that we see in comics. And I think Canada is beginning to reconcile, in small steps, the way that it has abused its Indigenous population. Canada 150 is going on right now, and that has thankfully given rise to a conversation about the colonialism that’s at the root of Canada as a nation.

So, we’re trying to be conscious of that, although there’s much more to be done in that regard. Especially in finding more Indigenous talent to tell Indigenous stories in Canadian comics — and in North American comics in general. 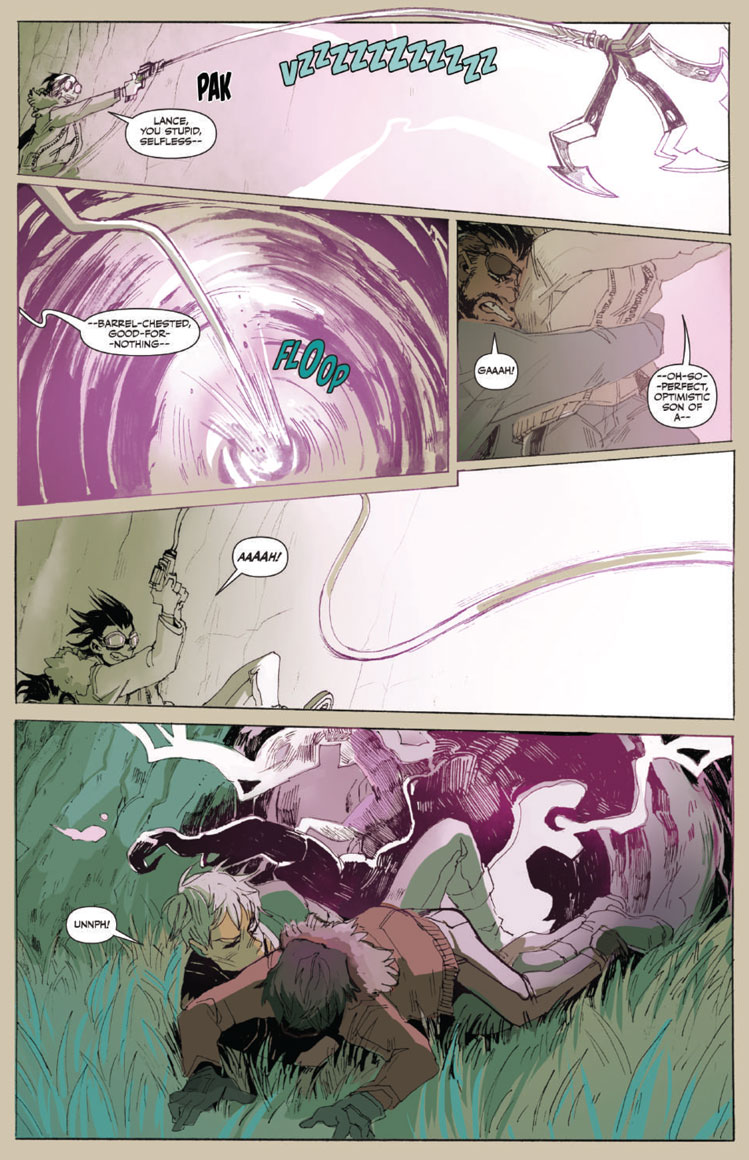 MS: I just want to touch a little on the mythology of the book. There’s this sort of mystical undercurrent of a threat Lance Valiant and the team are dealing with. How did that form for you?

AW: We wanted to create a world where there were mysteries to explore for Lance and his team. Something that would keep them globetrotting, and tie into whatever it is that makes Lance special. As we’re building this new, shared universe, we’re looking for these little places where we can add color and complexity. Where we can add to the complexity of the world without bogging readers down and make them feel like they need to pick up every book to understand what’s going on.

So, the idea of this mystic-seeming rift energy that lies beyond our world, that people have tapped into over time to give themselves power, is very much a key element of Freelance. But it’s also going to inform the Chapterhouse Universe in different ways here and there.

The best approach to magic for me is that it’s science you just don’t get yet. That’s where I’m at. It’s very mystical in its manifestations, and that’s the language people use for it, but there could be a scientific explanation for it all.

Or we can just fudge it. [laughs] It can be what the story needs it to be. It’s a super-hero universe and we want to have these fun, pulp elements we can draw on.

MS: What’s the outlook for more Freelance past this collection of Volume 1?

AW: We’re working on Volume 2 right now. That should be out starting in January 2018.

The Chapterhouse model is to these short seasons and revisit them on an annual basis, until we’ve told a story. We can build a library that way and it allows us to put out multiple books in a year that serve different audiences. And that way, we don’t overload people’s budgets, making them have to pick up five books every month. Or twenty books every month, just to follow a story.

So, you’ll get more Freelance next year. It’s been in the works already, but you’ll have to be a little patient!