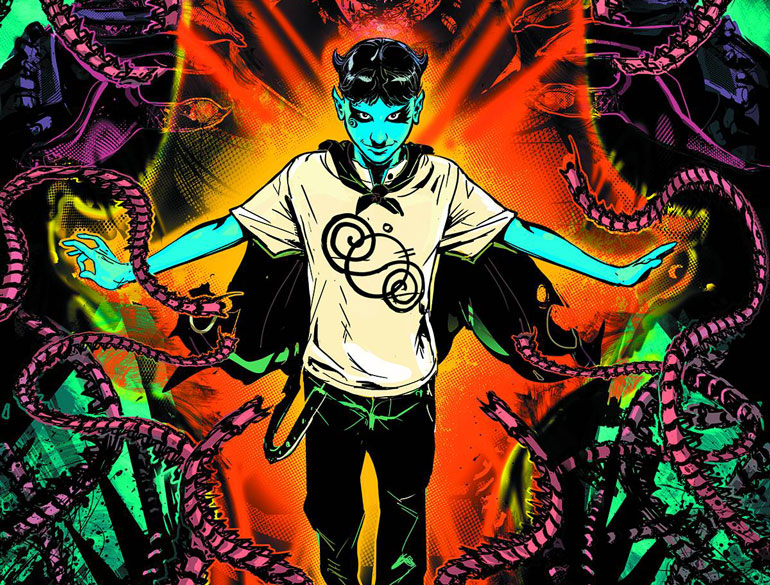 October brings a storm of new and renovated titles to DC Comics’ Batman family line, but at least one familiar face will be sticking around — albeit in an entirely new capacity. Catwoman writer Ann Nocenti is making the move over to a new title to launch Klarion, the new adventures of Jack Kirby’s infamous witch boy. Nocenti took a few moments out right before the book’s arrival in stores to share some of her thoughts about what’s to come in this strange, new world she’s crafting.

Matt Santori: After taking on Catwoman, Katana, and Green Arrow for DC Comics, what drew you to Klarion the Witch Boy as a character? 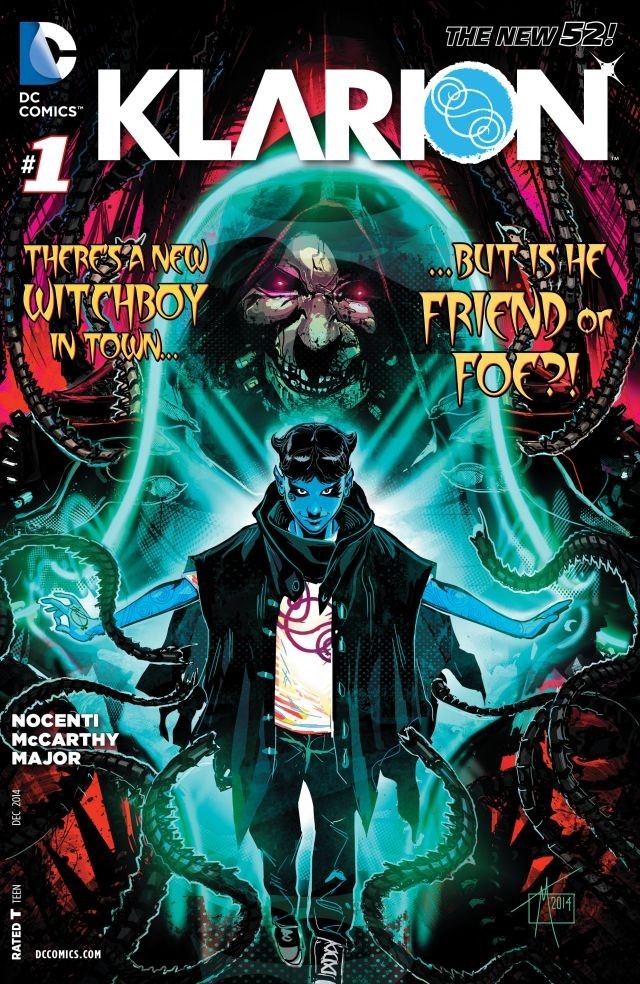 Cover to issue #1 by Trevor McCarthy

Ann Nocenti: First off, that Klarion is a Jack Kirby character. I love all things Kirby.

And in thinking about wizards and magic, I started remembering what drew me to the occult when I was a teenager. I think it was for a way for me to think about things I didn’t understand. And the supernatural genre is a place where fear can be explored. I have fears about where the world is going, especially anxiety about new technology, and my own love of new tech.

And for me, in comics, it’s all about the artist. Bob Harras sent me a link to Trevor McCarthy’s wildly inventive art. I knew there would be a lot of world-building work, since I wanted to create a special world for Klarion, and Trevor’s style has a huge range and his imagination is off the hook. We started shooting ideas back and forth, and our editor Harvey Richards gave us enormous freedom, and he really got into the process, shooting us images and ideas to spark us along.

At the center of that was Klarion himself. How evil is he? Is he really evil at all? He such a wild card, and no matter what angle I tried to look at him from, there he was, grinning back with that sly little smirk of his, egging me on. 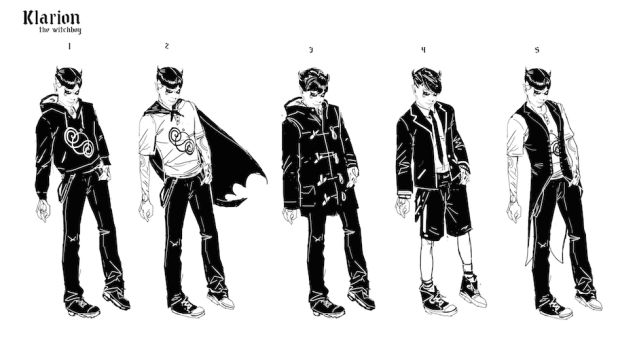 MSG: Klarion has had quite a diverse set of depictions over the years, from Jack Kirby’s original, to Peter David’s depictions in Young Justice, to Grant Morrison’s reinvention in Seven Soldiers. Is there a single depiction that resonates with you most, and how will your take be different from the ones that came before?

AN: I looked to Kirby first, of course. I got the feeling that Kirby found his own creation, Klarion, to be annoying, which I liked. Who knows? Maybe Kirby met a bratty kid and stuck him in a comic. Trevor had dug up a link to an old news story about the real kid Klarion’s face was based on. He looked like a sweet kid. So this bratty but sweet kid started to assert himself in my imagination. Trevor started drawing a range of versions of Klarion, and he hit on a great look. 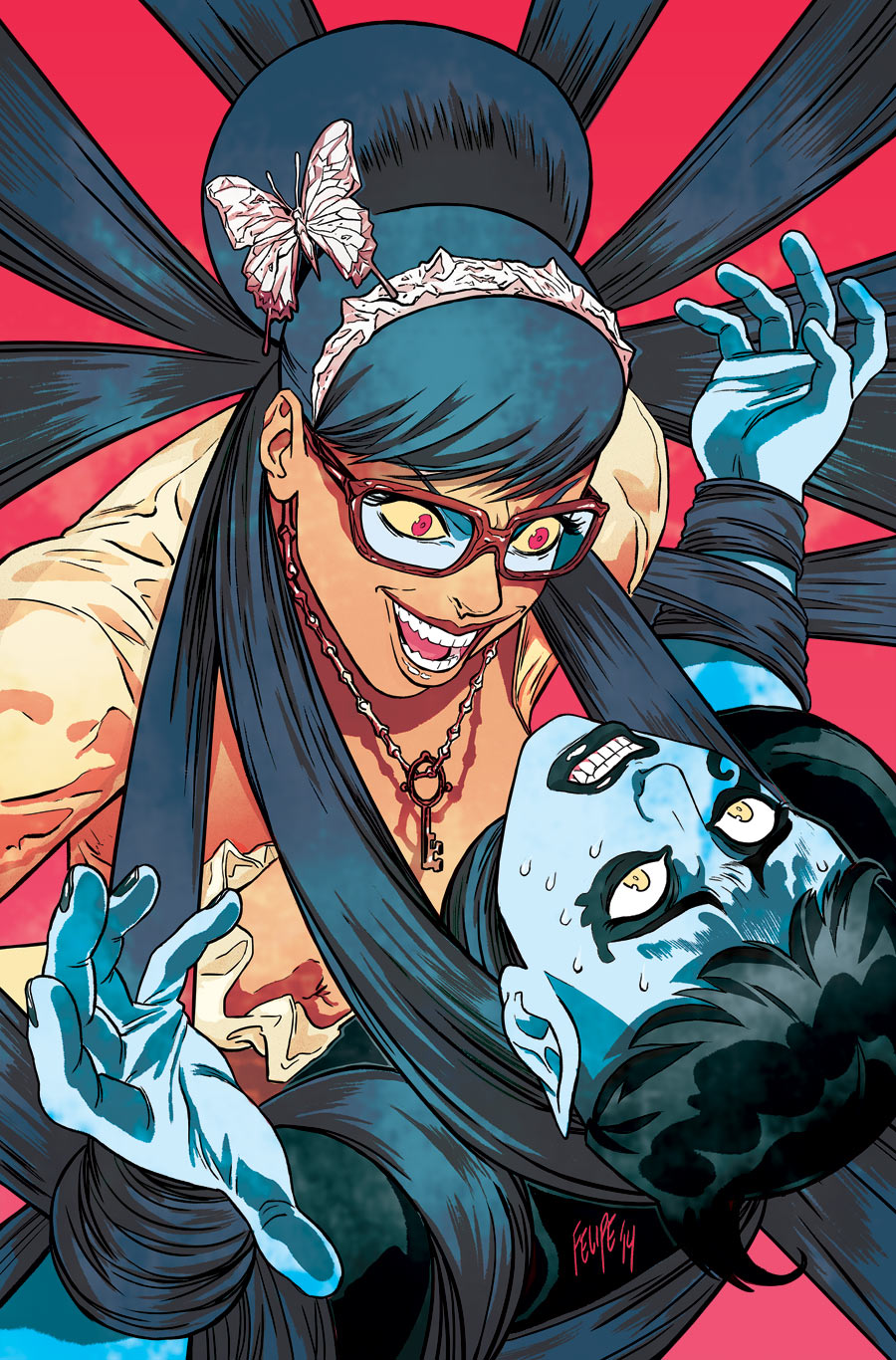 Cover art for #3 by Felipe Smith

And I read the Grant Morrison mini-series, which I loved. Morrison created a universe that seemed to be an extension of Klarion’s personality, as if Klarion were warping the world around him, which I thought was a great understanding of the occult.

I still haven’t read Peter David’s Klarion, but I like his work so I will track it down. And I watched Klarion’s cartoon appearances, which were fun. He’s snarky and snide but charming too.

MSG: Already, solicits seem to indicate a split between magic and technology in your upcoming stories. Are these factors completely separate or are they intertwined in the world you’re developing?

AN: They’re very intertwined. So much of new tech feels like magic to me. Little nano-particles capable of replicating? 3-D printers making skin grafts? Driverless cars? Wearable and ingestible tech? Being able to stand alone on any spot on the planet and be connected to the whole world? New tech is accelerating so fast.

Just what’s developed in the past few years is astonishing. It’s a leap, like the industrial age, that is changing life in radical ways. Tech also feels like magic in how little the average person, like me, can understand it. Before digital and virtual tech, I could fix the things lying around my home. Re-wire a lamp. Lift the hood of my car and tinker with the engine and get it going again. Now everything’s controlled by chips and coding that feels mysterious and magical to me. 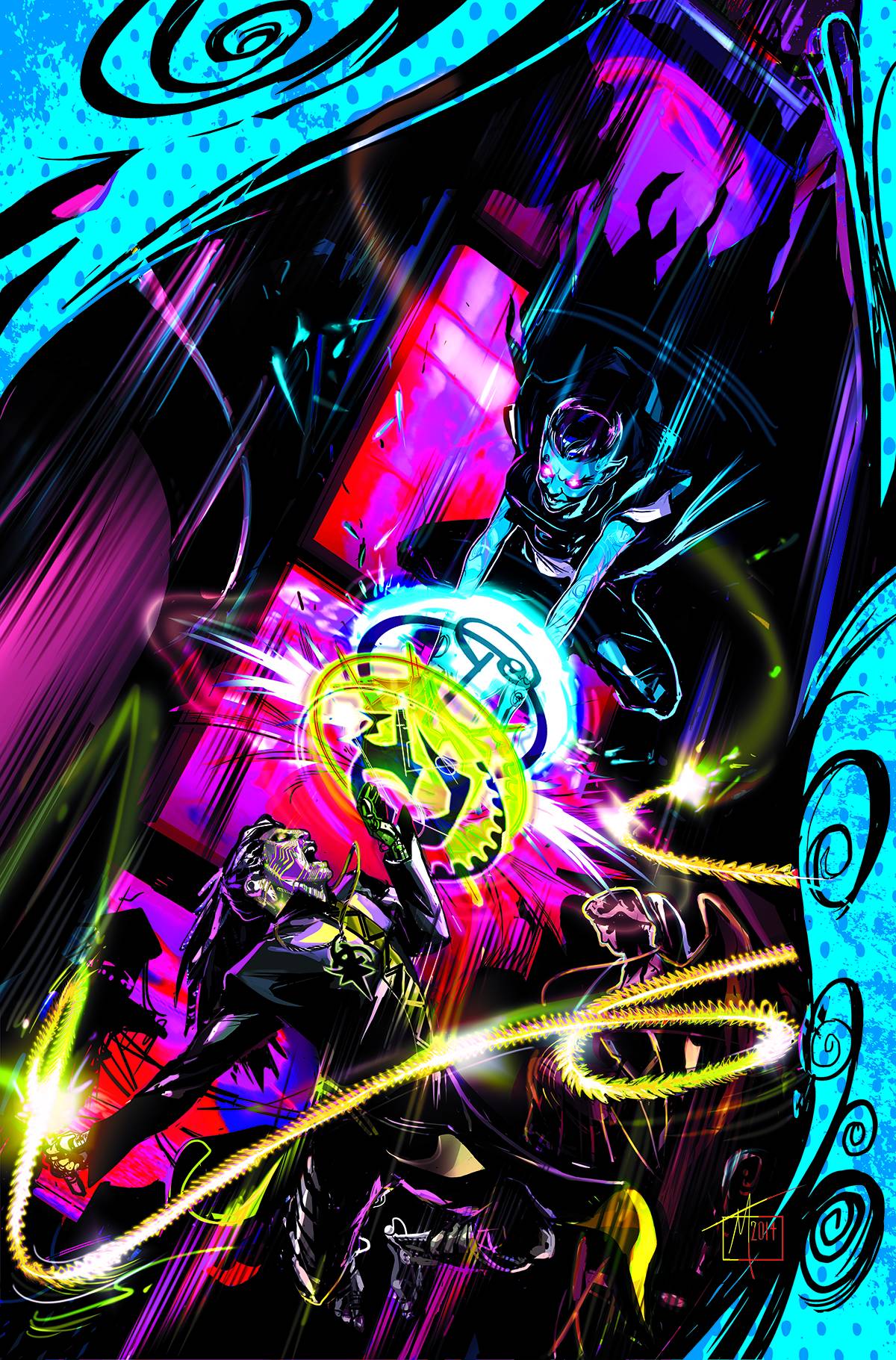 Cover art for #2 by Trevor McCarthy

So Klarion is a mash-up of genres. I guess I could call Klarion a sci-fi horror approach to magic. I also have a love of monsters, the spooky and the macabre, which figured into the setting, The Moody Museum. So we’re trying to make Klarion a full immersion experience, like entering a waking dream. None of which would be possible without Trevor’s fabulous imagination and craft. He’s drenching the pages in his own special magic.

MSG: Will Teekl, the feline familiar of the Witch Boy, still be along for the ride, and how do you see their relationship?

AN: I don’t want to spoil Teekl’s journey in the series, but Teekl has a sneaky role, and she’s on a slow boil. This early in the game, she’s just starting to reveal herself to us, and show us her power. I’m fascinated by the idea of a familiar, and there’s a curious way that our love of and dependence on tech is our modern familiar, so again, tech and magic will be close buddies.

MSG: The opportunity for a large supporting cast of supernatural characters seems to be present for Klarion. Who are some of the faces — new or old — fans can expect to see in the first few months of the series?

AN: At first I wanted to use so many of the DCU’s great supernatural characters. Trevor, Harvey and I talked about Black Adam, Zatanna, and The Spectre. And of course the Demon because Klarion has history with him. But something felt off about bringing in the big guns so early in the game.

So we decided to have Klarion slink around the city a bit, and stir up trouble before getting noticed by the big guns. He’s landed at The Moody Museum, inspired by the Mütter Museum in Philadelphia which I visited once a long time ago and the medical oddities on display there just stunned me. I’m also inspired by my own upbringing in a family of scientists and doctors, which gave me an early fascination for specimens and apothecaries. All of this felt perfect for spells and spell brewing and spell casting.

I wanted there to be strong female characters, so we came up with Piper and Zell. And I wanted there to be a sense of an odd family, so Piper and Noah are the sort of lackadaisical parents, with Klarion, Rasp and Zell the uncontrollable teenagers. But yes, we’re hoping, after we get our footing in Klarion’s world, to bring in some of DCU’s supernatural characters. 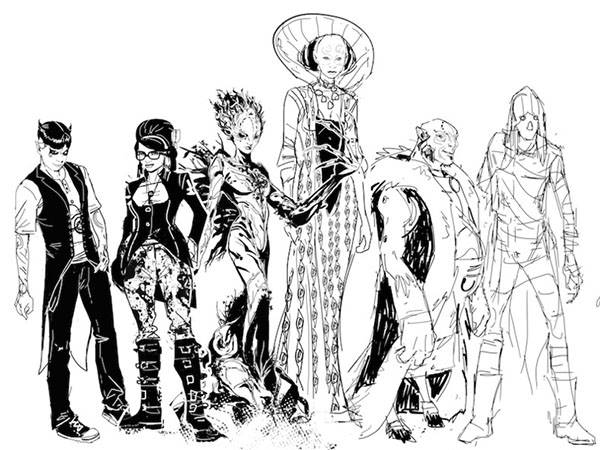 MSG: Why Gotham City for the setting of this series? Is there something special about the city that draws the Witch Boy to earth for the first time?

AN: We ended up setting the series in New York City, which I’m not sure matters because Gotham and New York City are somewhat interchangeable. Klarion wants to get away from his world, where witches are common, and head somewhere he can be special, and experiment with his powers. So he uses the internet to find occult spots around the planet, and is eventually drawn (and perhaps guided) to New York as a place of occult possibility.

MSG: How has the collaboration with artist Trevor McCarthy been evolving, and what do you think he brings to the character of Klarion specifically?

AN: Trevor and I are emailing or on the phone a lot, and he constantly astounds and surprises me. He’s using the art to foreshadow, very early on, things that don’t happen until later in the issue or even later in the series. The collaboration has been fabulous, a writer’s dream, really.

As for what he brings to Klarion, he’s the director, actor, and cinematographer. He animates Klarion, storyboards and creates the world, and then works with Guy Major on the lighting and special effects. I just do the blueprint, the screenplay, then bow out and Trevor runs with it. Interior art for #1 by Trevor McCarthy

MSG: Any final thoughts or special teases on your debut of Klarion for the Comicosity audience?

AN: Well, of course we’re wild with excitement and anticipation. This is our baby, and we’re tossing it out in the world hoping readers like it. Feedback is very important, so we’re hoping readers get into the stories and characters and have insight and ideas for us!

The first issue of Klarion from DC Comics arrives in stores and online TOMORROW!