This Wednesday, Dark Horse Comics will fire up a new series in the Star Wars expanded universe with Corinna Bechko and Gabriel Hardman at the helm. Star Wars: Legacy Volume 2, set 138 years after A New Hope, will focus on the adventures of young Ania Solo, picking up after the conclusion of Ostrander and Duursema’s original Legacy series focusing on Cade Skywalker. Bechko and Hardman were kind enough to take time to answer questions about what readers can expect from this new series focusing on the future of the Solo bloodline. 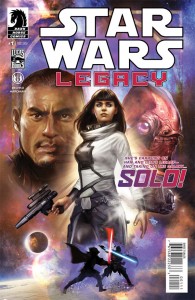 Aaron Long: Best to start at the beginning: how did you become involved with Star Wars: Legacy? What drew you both to this series?

Gabriel Hardman: We were approached by Star Wars editor Randy Stradley who asked if we were interested. Yes. Yes, we were. We had speculated on what we’d do with a Star Wars story in the past and this seemed like the perfect opportunity. I’m a life long Star Wars fan and the idea of telling a story in that world sounded like too much fun to pass up.

Corinna Sara Bechko: I’ve always been a Star Wars fan so having the chance to work on Legacy is an opportunity I absolutely couldn’t pass up. I love the fact that our story is set in the future, with new characters, so we have the chance to really explore some corners of the galaxy that haven’t been seen before.

CSB: Ania is brash and a little bit impetuous, but fiercely loyal to her friends. The burden of her legacy doesn’t weigh on her the way it did on Cade simply because the galaxy at large is mostly unaware of her existence. For a little while, at least…

GH: Also, exactly who she is and where she came from is a bit of a mystery at the beginning of the series. We find Ania running a junkyard moon in a remote system, virtually cut off from the rest of the galaxy. She’s not a character who rubs shoulders with the senators and royalty, she’s on the bottom rung when we start the series.

AL: With this series you will be following up on the previous timeline established in the Ostrander/Duursema Legacy series. Can you describe what the state of the galaxy is at the outset of Legacy #1? Will any characters from the previous Legacy series be making an appearance in Ania’s world? 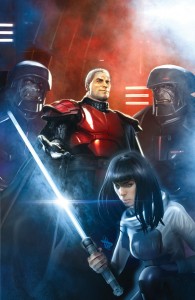 GH: Our Legacy series is set not long after the end of John and Jan’s series, approximately 140 years after A NEW HOPE. The galaxy has just come out of a huge war that saw the defeat of the Sith. In the aftermath, a power sharing government is established between the benevolent Empress Fel, the remnants of the galactic fleet and the Jedi. But this government is struggling to maintain legitimacy. The galaxy is a very unstable place at the moment. We’ll be seeing several characters that were featured in John and Jan’s run but the bulk of the series will focus on new characters.

AL: The cover for Legacy #1 features some characters we have yet to meet. Can you shed some light on the cast that will be surrounding Ania in the series?

CSB: Ania’s confidant and closest friend is a Mon Calamari refugee named Sauk. Ania also has an old friend named AG-37, a decommissioned assassin droid that keeps an eye on her welfare. And of course Star Wars: Legacy wouldn’t be Legacy without Imperial Knights!

AL: Your love of the Planet of the Apes franchise is well known from your work at BOOM! Studios. What has each of your relationship been with Star Wars? Were you fans growing up?

GH: I saw A New Hope in the theater when it was just called Star Wars. It was one of my tent pole obsessions growing up and I’ve never tired of those movies. I love the arc for Luke, the redemptive arc for Vader and I still find the core ideas loyalty and friendship very moving. I will always smile and choke up a bit when Han comes back to save Luke in the Death Star trench, no matter how many hundreds of times I’ve seen the movie. 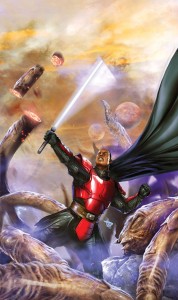 CSB: Definitely! I’ve been a huge Star Wars fan from about the age of 5. The first film had a huge impact on me. It’s a real honor to get a chance to work on a little corner of the Star Wars universe now.

AL: Gabriel, you will be penciling the series as well as co-writing. Is the Star Wars universe a place you’ve always wanted to sink your artistic teeth into? Are there any particular comics or moments in the film that have influenced your style for the series?

GH: One of the biggest visual influences on the look of Legacy is the design work that Ralph McQuarrie, Joe Johnston and Nilo Rodis did on the first trilogy. I love that used universe they created and even though Legacy is far in the future, I’ve used that aesthetic as a guide. We also went back and watched a lot of movies that were an influence on George Lucas when he was creating Star Wars in the first place. We re-watched all the Akira Kurosawa samurai movies and let me tell you that’s no chore. Those are some of my favorite movies of all time. I think Kurosawa’s style is a big influence on the way I’m approaching Legacy visually.

AL: Are there any teasers or tidbits of info about the first arc that you can release for Comicosity’s readers?

GH: Lightsaber battles, a treacherous impostor, a narrow escape from a sulfur vent creature and all around science fantasy adventure.