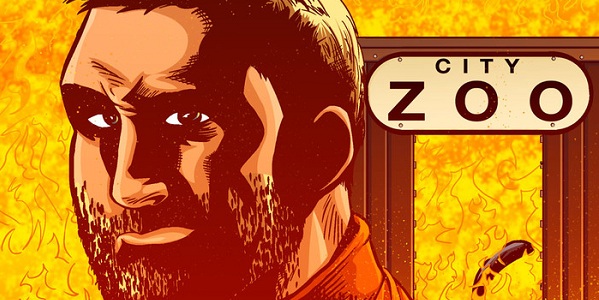 Benjamin Bailey is about to get Uncaged. The Captain Ultimate writer has teamed with artist Taylor Stauft to create Uncaged, an action heavy comic set in a Zoo. Bailey and Stauft are currently running a Kickstarter campaign to get the story off the ground, and Bailey gave us the details of what readers will be able to find in Uncaged. 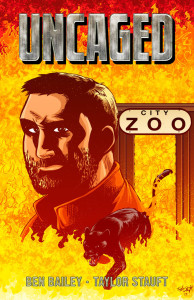 Aaron Long: You’ve described Uncaged as “Die Hard in a Zoo”…can you walk me through the process of how you and Taylor ended up crafting a Die Hard-style story set in a zoo?

Benjamin Bailey: What it really boils down to is our love of the action movies of the 80s and 90s. We are both huge fans of those films, and we wanted to make something as sort of a tribute to the genre. We wanted to follow the common setup of a lone guy trapped in an area with a bunch of bad dudes. Die Hard and the tower, Under Siege had a battleship, Cliffhanger has the mountains and so on. So, we tried to come up with the most insane location we could think of and zoo seemed like a great choice. It’s ridiculous, which makes it perfect.

AL: What can you tell us about Dakota & what he’ll be up against in the Zoo?

BB: John Dakota is the story’s hero, and he has all the hallmarks of a classic action movie hero; he’s a cop who doesn’t play by the rules. He was just recently suspended for using excessive force, so he reluctantly agrees to take his kid to the zoo for the day. Things quickly go to hell as a group of mercenaries attempt to steal a shipment of uncut diamonds that is being smuggled into the zoo with a new exhibit of jungle cats. The zoo ends up on lockdown and Dakota’s kid gets taken hostage, which turns out to be a big mistake on the part of the bad guys.

So basically, it’s John Dakota versus the mercenaries and the guys smuggling in the diamonds. 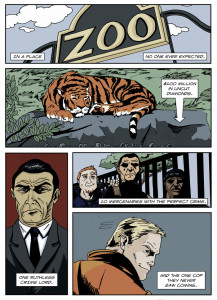 Plus, of course, the animals get in on the action, too.

AL: What are the long term plans for Uncaged? Is this a contained, one-shot story or, if things go well, is there a chance of seeing Uncaged with a Vengeance?

BB: Right now, it’s just a one-shot story, but these sorts of things lend themselves to sequels. Would like to do more Uncaged? Absolutely, it just depends on how people respond to it. We are currently a 100% focused on getting this issue funded; that’s all we’ve planned at the moment.

AL: Can you discuss what is available for backers at different pledge levels in your campaign?

BB: We have some great rewards and we are updating with new ones all the time! There’s a digital version of Uncaged, as well as a print version that comes with a regular cover by Taylor or a variant cover buy Johnathan Moore. There’s an opportunity to have Eisner Award winning editor Adam P. Knave edit your script with you. We have original art pages up for grabs and a few freelance writing jobs from me for your comic site or blog. The rewards have been going quickly, so check out now if any of that stuff sounds like something you’d be interested in.

AL: Any final words for Comicosity’s readers regarding Uncaged?

BB: I know Kickstarter can be a touchy subject for some people and everyone is afraid of getting burned, but I want to let you guys know that we are a 100% committed to this project. Taylor and I are already working on the book, and the letters and colors are being provided by the dudes I work with on Captain Ultimate. This isn’t one of those “hypothetical” books that we are waiting for funding to make; we are making it right now. It’s gonna happen and we would love it if you guys would be a part of it!

The Kickstarter page for Uncaged can be found here: http://www.kickstarter.com/projects/1459272970/uncaged