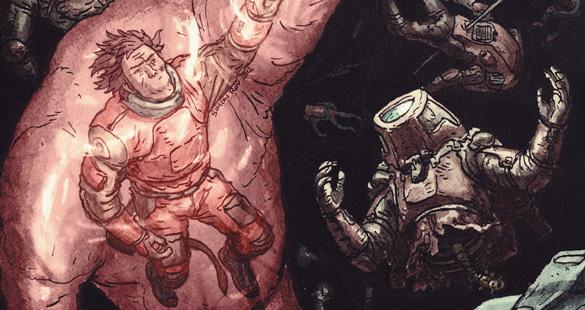 Back in January, Prophet, written by Brandon Graham, started off the relaunch of Extreme Studios titles with a bang. Critical and fan acclaim surrounded the title immediately and Prophet has been going strong since. Graham recently took time to discuss the world of Prophet, Sci-Fi, and pulling double duty as writer and artist with us. 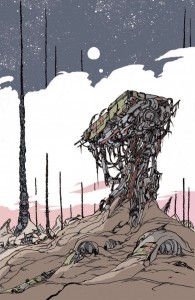 Aaron Long: Prophet was the first Extreme Studios relaunch book and has been met with the most praise of the whole bunch. Have you been surprised by the attention the title has received in recent months?

Brandon Graham: Yeah, I was thrilled that people have liked it as much as they have. I have a lot of faith in the guys I’m working with on it so on that end it made sense that people would like what Simon, Farel and Giannis’s did because I was really impressed by what they delivered.

I think I assumed that the kind of book I wanted to do with these guys wouldn’t click with everyone, and I’m sure it doesn’t but hopefully the like minded readers like where it’s going.

AL: Prophet is arguably the “purest” science fiction book in comics today. Is your Prophet run inspired by a personal enjoyment of science fiction or any authors/series in particular?

BG: At first it was just an attempt to do the kind of Conan comics that I missed that John Buscema and Roy Thomas were doing in the 70’s and 80’s. Hopefully it’s evolving into something of its own from that.

Me and the dudes are drawing from a lot of other science fiction that we’re excited by. There’s been a lot of watching 80’s Tom baker Dr who and looking at sci comics stuff by Fil Barlow (who did a back up in #22 and the cover for #29). Miyazaki’s Nausicaa manga and Matt Howarth’s work is a big influence on me.

I think Giannis is coming at it in his issues from a more cyberpunk and manga approach. He’s been pushing more of a Tsutomu Nihei’s Blame and Masamune Shirow look. And we’re all pretty deep into Moebius books.

I think as far as just approaching bizarre and alien cultures Carla Speed McNeil’s finder has been something I’ve been looking at a lot. I’d argue that she’s doing the best Sci fi book in comics today.

AL: So far in the series we’ve seen a few different iterations of Prophet. Will the different Prophet storylines be coming together at some point or will the series continue to be a collection of standalone Prophet tales?

BG: It’s getting more complicated as it goes. I feel like the book has to become something other than a Sci fi Conan, we’re adding a lot of new regular characters and the Prophets who have shown up are the ones that will stay. so we’ll show them evolve from tube clones into individuals. The plan is to keep the issues episodic but work them together so they’re all part of one bigger story.

AL: In issue #26 you’ll be pulling double duty as artist and writer. Can you discuss your process for the issue? Did you script the issue the same way you have for issues penciled by other artists? Or was your creative process different for this issue?

BG: Prior to Prophet I’d only done comics by myself so it’s what I’m used to. but I did want to approach it more like I do the other Prophet issues. There’s much less second guessing when I’m collaborating because you’ve got someone to back and forth the ideas with. I ended up reworking it a lot as I went, I changed the ending a couple times before I got to it. And it’s the first issue that’s been narrated by one of the characters.

Simon’s started working on an issue that he’s writing, drawing and coloring as well. (It’ll be #32)

AL: Any final words for Comicosity’s readers regarding Prophet?

BG: Sure. one thing I always want to impress upon people is how everyone that works on Prophet also does other books of their own.

I’ve got my King city and Multiple warheads, that’ll be out later this year. Simon has Jan’s Atomic heart and is working on something for DHP. Farel has Pop gun War and Giannis has Old city blues. The colorist Joseph Bergin III (http://sayunclecomics.deviantart.com/) and the letterer Ed Brisson (http://edbrisson.com/) both do their own comics too.