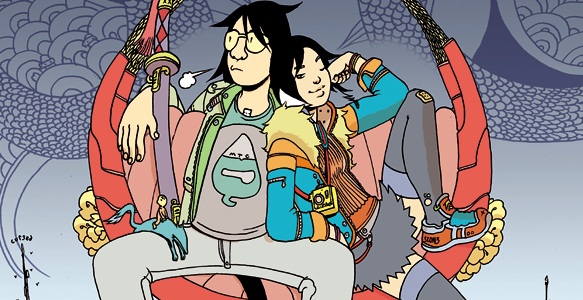 Brandon Graham is returning to his roots this month with a new Multiple Warheads series from Image Comics. “Alphabet to Infinity” hits stores October 24 and Graham recently took time from his schedule to discuss the mini-series and what readers can expect from the newest Multiple Warheads story. 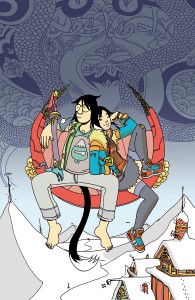 Brandon Graham: It is nice timing with Prophet getting me more attention, and me getting a lot of chances to work on really exciting projects but it’s important to me to always stick to doing the kind of work that’s most personal to me–and “personal” sounds weird when you see that I’m making fantasy joke comics. But that’s the kind of stuff that first clicked with me that got so excited about spending my life drawing and writing.

AL: For readers not familiar with Multiple Warheads, how would you describe the series?

BG: It’s set in a fantasy version of Russia following a woman who smuggles magical organs and her werewolf boyfriend as they travel across the country. And there’s a 2nd story line about a head hunter woman whose been sent out to find a guy whose head was cut off.

My whole style with this stuff is really to let myself go off the main track and explore the fictional places I’ve come up with.

AL: Sexica and Nikoli are on an odyssey in this series, can you describe what they will encounter on their adventure? 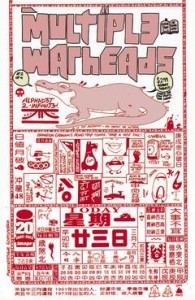 BG: A lot of their story is about Sexica trying to get away from this dangerous life she’s had and getting wrapped back into it again. They end up at a haunted city built into a wall that shouldn’t be there.

And there’s a giant dinosaur with a french palace built onto it’s back and a tea pot made out a war robots head who is plotting to build an army of tit-men and ass-men. It always sound ridiculous when I try to explain this stuff. I always feel like I’m getting away with something when I make books like this.

AL: This arc has been solicited as a four issue mini-series, entitled “Alphabet to Infinity”. Will this be the first of several integrated mini-series, or is it a self contained story?

BG: My plan is to put out a mini series of issues every year, that way I really put the work I want into it and color and hand letter the thing myself. Also part of it is that when I was teenager a lot my favorite books would come out as 4 or 5 issue chunks a year, Stuff like Adam Warren’s Dirty pair or Shirow’s Appleseed. so when I saw that a new mini series was starting it was an event.

AL: Any final words for Comicosity’s readers regarding Multiple Warheads?

BG: I hope people like it. My work might not be perfect for everyone across the board but I’m really proud of this stuff and hopefully it’ll be the kind of thing that will really click with some people.