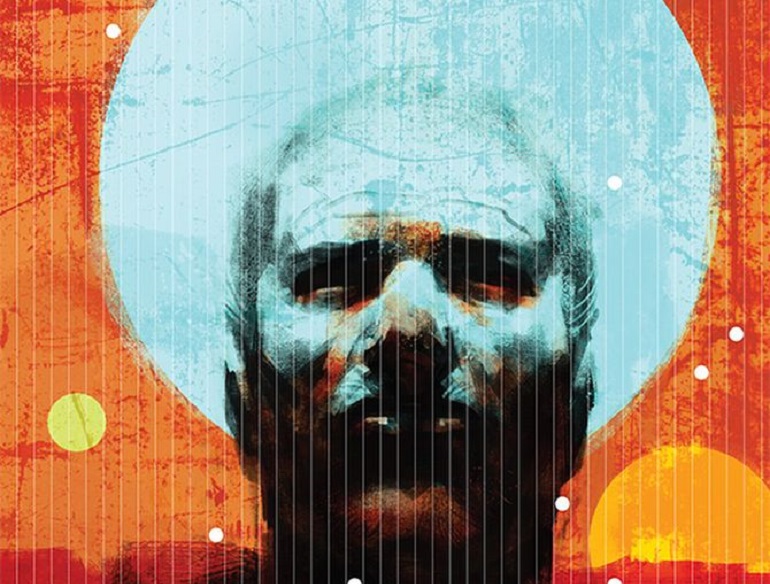 Image Comics’ latest venture into the space western genre is brought to us by Ivan Brandon and Nic Klein in the form of Drifter. It’s an ongoing series that follows protagonist Abram Pollux after barely surviving a crash landing on an unfamiliar planet where he discovers a great deal of things he wasn’t quite expecting. The first season, consisting of five issues, ended in March with the next one expected to begin a month after the June release of the first trade paperback, Drifter: Out of the Night. In anticipation of this release, Comicosity sat down with the two creators to talk about both their process and the tricky bits of working with genre tropes.

J. A. Micheline: The last time you guys worked together was a 5-issue run of Viking which was about—spoiler—Vikings. You’ve gone the other chronological direction with Drifter, which means you’ve left behind the realm of history and different narrative requirements. Sci-fi and fantasy demand a lot more world-building. How has that impacted the creative process for you both?
Ivan Brandon: I tend to buck at what people naturally expect out of a given genre and I think with Drifter—as with Viking—there are some aesthetic shifts, but hopefully the characters and their goals are recognizable as simple and human. That’s the intent, anyway. I always saw Viking as sci-fi in a sense, in that Vikings were kinda the original astronauts, leaving comfort behind to brave the unknown and explore. We have to design more new things in Drifter but their purposes are similar.
Nic Klein: For me, it basically boils down to the same thing, telling a story visually in a (hopefully) interesting manner. For Drifter I had to do a bit more designing/“making things up” than I did on Viking, for obvious reasons. On Viking, on the other hand, I had to do a lot more visual research on period clothing/weapons/etc. So it evens out.
JAM: You did a great interview with Multiversity that covered a lot of your artistic process, Nic, and I don’t want to re-tread too much of that, but I’d like to hear more about the sound effects in particular. You play with the spatial positioning of the sound a lot—and that’s especially true for some of the SFX that are key to the narrative. That seems like a choice you’ve made specifically for this book, comparing to how the sound effects are done in Viking and some of your Big 2 work. What’s special about this book that made you want to go that direction?

NK: I wanted the SFX integrated into the art. I think it’s less interesting when the SFX are just laid on top of the art. To me, they should be part of the art as a design element, but also as part of the storytelling. For example, if I place a SFX behind an object in a panel it reads as though the sound is coming from behind said object. That can only be achieved if integrated. Back in the day when comics were hand lettered on the actual pages this was normal, and if you think about it, it makes perfect sense. I also don’t use fonts for SFX in Drifter, they’re all hand drawn (well, on a tablet, but you get what I’m saying), the more organic the writing feels, the better.
JAM: Firefly was one of the first works in recent memory to really make the notion of a space western literal, and a big part of that was the stylistic dialogue.  You’ve chosen to go with stylistic dialogue for Drifter too. What do you think that contributes to the narrative and did you consider a version without it?
IB: I’ve been told most of my work is somewhat stylized… My friend Jason Latour told me once even the way I speak isn’t all that normal. It takes less deliberation than you might imagine. As best I can, I sorta squint my eyes to see the world through the character’s eyes and it mostly comes out on its own. I definitely wanted to sand down the gloss of sci-fi tropes and dirty it all up a bit.
JAM:  Nic, you’re doing the unusual thing and taking all the art duties on for yourself. That means a lot of work but also the guarantee that the comic is made exactly the way that you envision it. What has that meant for you in terms of schedule and the way that you and Ivan work with one another?

IB: Nic’s done full art for everything we’ve done. The only change here is the level of rendering slows Nic down to normal human speed.
NK: I do need a bit longer per issue then I would on something else, even though I’ve done all the art chores on almost all my books so far. Drifter‘s rendering does take longer, but that is why we’ve adopted the schedule of seasons, so that I have time between arcs to catch up and make sure the single issues come out when they’re supposed to. We knew this from the start, so we just built the work process around it.
JAM: Christianity plays a rather large part in the unfolding of Drifter and though you’re not the first to do it, it’s a kind of interesting thing to do, since it implies that it’s one of the things that stands the test of time in the future. What does the element of religion bring to the comic and what about it (or maybe what about us) guarantees its endurance to the far future?
IB: I think it’s less about religion and more about clinging to our rituals. Drifter in general—a lot of it is about rituals, about moving the pieces of a structure without the structure itself.  A lot of human behavior is ceremonial and I think the further we get from where we start out, the more that can become important. Father Arkady is a damaged man. He believes in God but that’s not what gets him into trouble.

JAM: Last questions are always a good space for lasting impressions, and I’m eager to find out what you think will leave the biggest imprint on the reader’s mind when they pick up your book—especially since I think one of the trickiest aspects of a genre comic is the balance between trope and innovation. If you could identify one thing, what would you say makes Drifter really stand out above the crowd?

IB: I can’t really speak for standing out, though obviously we’re doing our best. But what we’re trying/hoping for, and what we’ve been hearing a lot, is that the book doesn’t feel like any other books. That’s really one of the most important things for us. We want this thing to be a unique and immersive experience for everyone, for you to feel as thrilled/scared/confused/silly as any of the characters do in any given moment, but in a way that feels really surprising. Characters you recognize, on a world that you really really don’t. Every step in Drifter, the floor might give out underneath you. Some of my life’s best moments came from falling down.

If you’d like to catch up with Drifter before the series picks up again in July, Drifter, Vol 1: Out of the Night collects the first five issues and will be available for purchase on June 17. Check your local comic book shop for more details.
Sharing
Authors