This June, Brian Clevinger and Scott Wegener will unleash another mighty volume of Atomic Robo upon the world of comics. This arc, Atomic Robo and the Flying She-Devils of the Pacific, takes Robo to places readers have never seen before and continues the raucous and fantastic journey of everyone’s favorite atomic robot. Clevinger and Wegener recently took time to discuss the new volume, the future of Atomic Robo, and where you can get your hands on this awesome series. 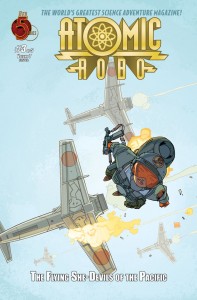 Aaron Long: You two have gone to some pretty crazy places with Atomic Robo so far….can you describe at a high level where Volume 7 is going to take him?

Brian Clevinger: Volume 7 introduces us to the post-WW2 Pacific.

The Pacific Theater is almost entirely forgotten in our popular consciousness, and we wanted to kind of play with that. It’s such a remote part of the world, it’s easy for people and things to be forgotten out there. But that doesn’t mean they’re gone. So, what kind of culture do you create when you mix people who want to be forgotten with dangerous technologies that were meant to be forgotten?

Naturally it creates the kind of setting where Robo crosses paths lady air pirates. And together they discover a secret mad science plot to destroy North America.

AL: Volume 7 is entitled Atomic Robo and the Flying She-Devils of the Pacific. That is one of the best arc titles I’ve ever read – where did it come from?

BC: It’s the kind of phrase your brain will spit out if you spend an afternoon researching real pulp story titles!

AL: Atomic Robo: Real Science Adventures was recently launched. Will any of the stories in RSA be connecting to Volume 7 at all?

BC: Oh, man. That would’ve been smart. Where were you six months ago?

Every Atomic Robo story tells you something new about the timeline and connects with other stories in a variety of ways, but there’s no story in Real Science Adventures to specifically tie in with the She-Devils. 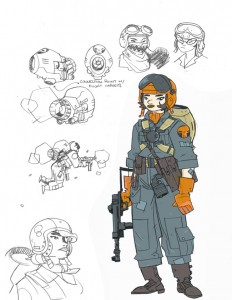 AL: Scott, Brian has had you draw some very…diverse locations and characters throughout the series. What has been the most challenging to pencil so far?

Scott Wegener: Everything I happen to be drawing right now. I’m always trying to be better at what I do, and I keep raising my own personal bar. In that regard, drawing a simple office in Vol.7 is a greater challenge than drawing a villain’s secret base hidden in the Italian Alps in Vol.1.

But there have certainly be some points along the way where I thought I would go insane; the insides of a clockwork pyramid tank for example. Trying to work out what a pyramid looks like, the angles, as seen from the inside across a two-page spread was very challenging. I had to build a little model out of card stock and stick my face in it to see how the walls appeared to slope.

The Lauftpanzers from Vol.2, which I think were my own dumb idea, turned out to be something that I was not really up to the challenge of drawing well from page to page.

The Quantum De-Computer from Vol.3, the harbor district of Tokyo in Vol.4, the insides of a partially constructed Empire State Building in Vol.5. And basically all of Vol.6. I thought my brain was going to liquify and run out my ears on each of those.

But sitting here now, I know I can do those things (or sort of do those things), so it’s the challenges of even the mundane elements of Vol.7 that are currently forcing me to learn new things and push my abilities.

AL: With Volume 7 on the horizon, do the two of you have a planned ending point for Robo? Or will he continue on perpetually?

BC: Yes and no? Right now we’ve got 15 volumes figured out in broad strokes. Though, come to think of it, I think Scott and I accidentally created two more in the last month. Anyway! Let’s say Volume 15 is the last one. Well, it wouldn’t be THE END. It’d just be the last Atomic Robo story we tell.

It’s something we wrestled with for a while. How to end it? Big tragic event? Quiet sad moment? A heroic triumph? It doesn’t work like that. Any kind of closure we’d propose to ourselves felt unnatural. At first we just hadn’t figured out the right note to hit. But eventually we discovered the theme of Atomic Robo is optimism. It just never occurs to Robo not to make things better even if he has every expectation it’ll kill him to do it. I think it represents a faith in the long, slow arc of justice over time.

So, the only ending that makes sense is the promise, even if it’s never fulfilled, of more Atomic Robo.

AL: Any final words for Comicosity’s readers regarding Atomic Robo?

BC: If you haven’t read Atomic Robo yet, check out our website. Of particular interest may be…

We’ve got six trade paperback collections out in the world now. You can start with any of them and you can read them in any order. No, seriously.

Most people just flat out don’t believe that’s possible, but here it is: y’know how you can read about The Depression without having to know how The Renaissance ended? It works like that. It’s the easiest comic in the world to pick up and enjoy. Give it a shot!