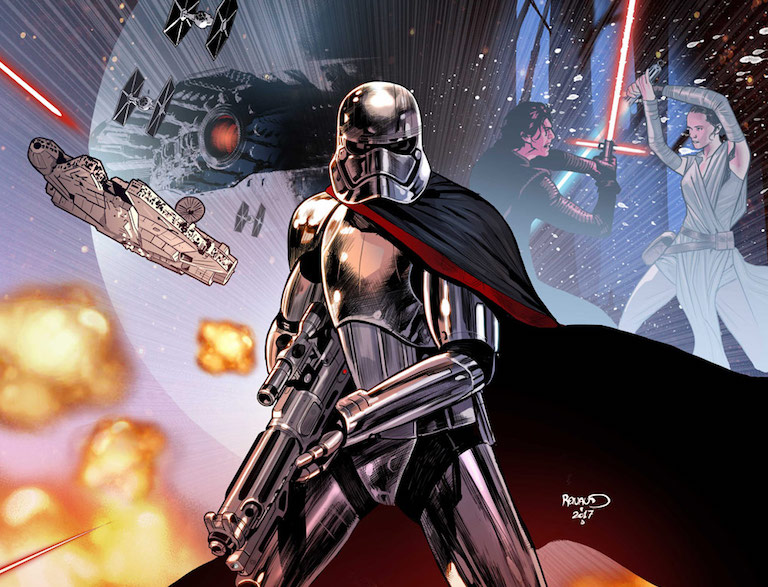 With Star Wars: The Last Jedi coming out this holiday season, fans are getting a chance to learn more about their favorite sequel characters. On the comics front, superstar writer Kelly Thompson (A-Force, Hawkeye) is getting a chance, along with artist Marco Checchetto, to show fans just how First Order badass Captain Phasma escaped from the garbage chute of Starkiller Base just before its explosive end. We got a chance to ask Thompson a few questions about the upcoming Journey to Star Wars: The Last Jedi: Captain Phasma mini-series. 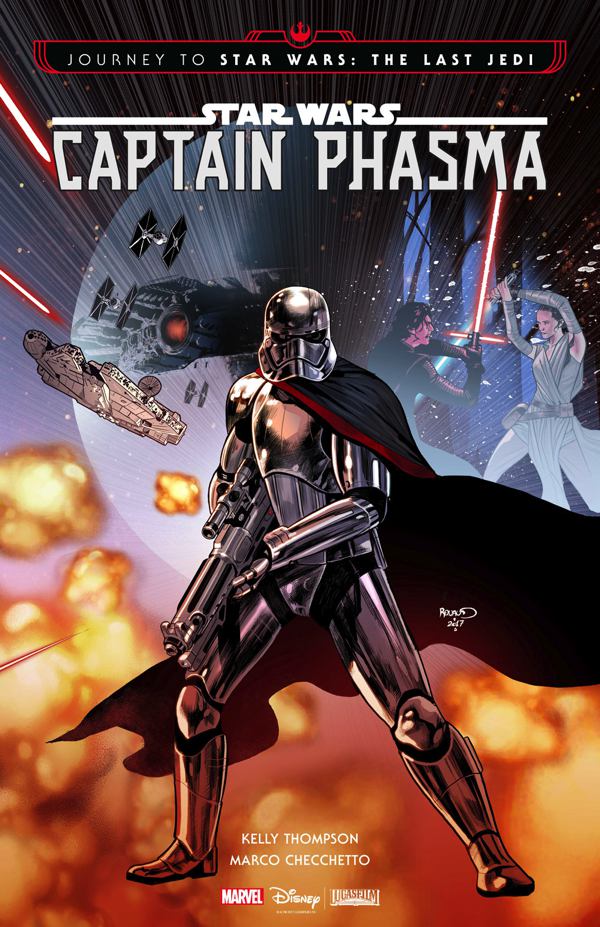 Jessica Boyd: The Force Awakens gave brief glimpses into Captain Phasma, however this comic is the first opportunity to take a hard, long look at the character. How does it feel for you and the creative team to have such a major role in crafting fans perspective on new Star Wars characters?

Kelly Thompson: It’s such an honor – and slightly scary of course  – when you’re given the chance to do something canon for a universe with the impact of Star Wars. But for Phasma, we not only got to create something canon, but something that bridged the gap between some of the most celebrated and iconic films of all time and that is…definitely terrifying! It’s such a responsibility. But it’s also one of the most exciting things I’ve ever gotten to do in my life. I hope I can do it justice, I know the rest of my team has as they’re turning in incredibly gorgeous and cool work. 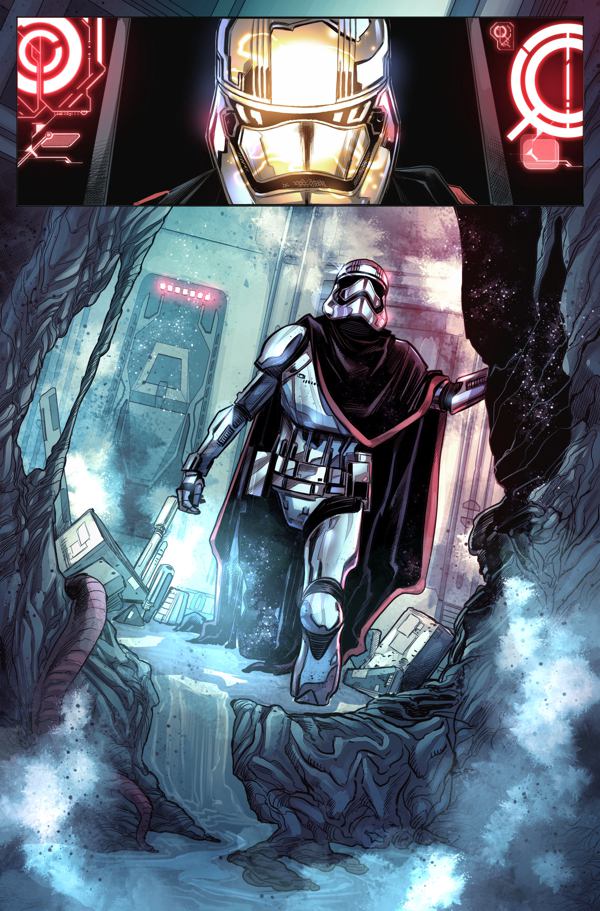 JB: You are a regular now in playing in the sandboxes of established characters and finding ways of telling meaningful stories, such as A-Force. Is there anything different or a different approach you have to take for Star Wars?

KT: I think that with a character like Phasma and a property like Star Wars, there are pretty strict boundaries you have to observe, but I think that sometimes the best work can come from those kind of restrictions. I really ended up loving that we tackled a small sliver of time – bridging the gap between films – and focusing on one character’s actions following one really big decision she made. I hope I brought some of myself to it, I always hope that with anything I do, but the more important thing is making sure I captured something true and real in the character. 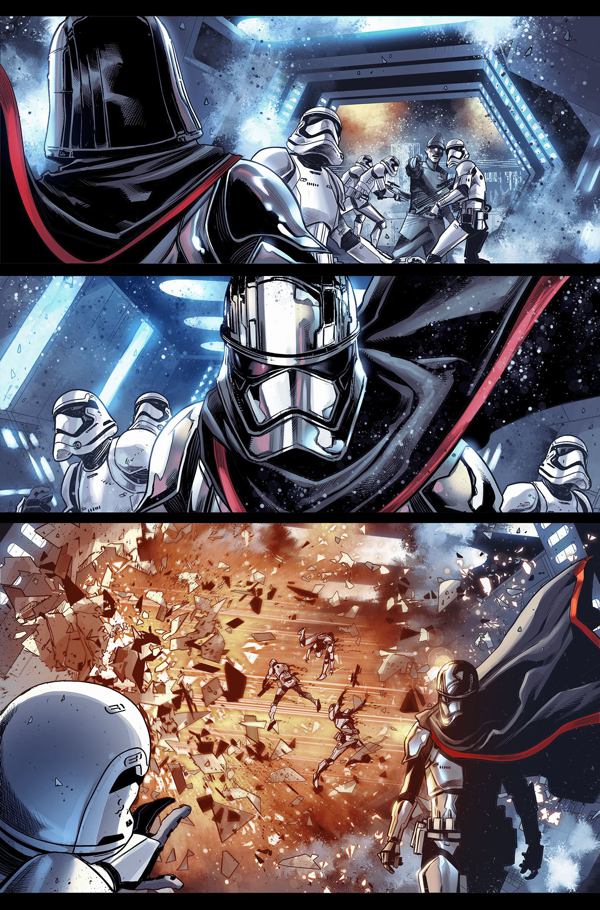 JB: This comic is coming out less than a week after the first novel about Captain Phasma is released. Is there any coordination on character, story or other matters between you and the novel’s author, Delilah S. Dawson? Does the Lucasfilm Story Group help with that?

KT: Well, yes, everything gets run through the Lucasfilm Story Group, so they are careful to coordinate, which is an impressive and daunting job, keeping all those incredible and far-reaching plates spinning. And I was lucky enough to get to read an early draft of Delilah’s novel, which is very cool, and was super useful in helping me to understand who Phasma was and where she came from. The novel does a deep dive into Phasma’s past and our comic just covers a small amount of time between films, so they’re very different stories, but the work Delilah did fleshing out Phasma’s past was naturally invaluable in building her future. 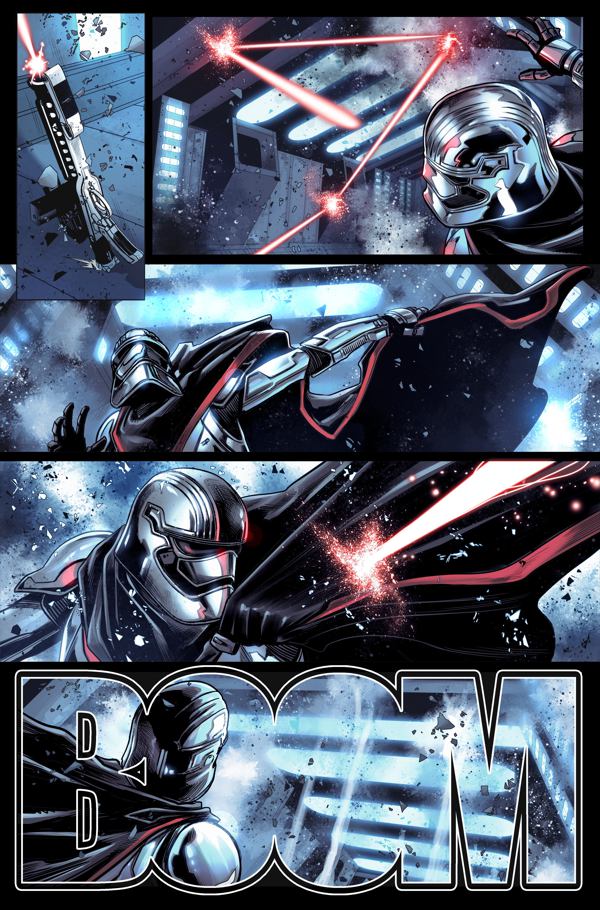 JB: How was it finally getting to work with Marco Checchetto?

KT: Awesome! I’ve been a fan of Marco’s work for a long time and we almost had a chance to work together on something once before that didn’t work out, so I was really excited that he was going to be illustrating this. He’s got such a phenomenal style for Star Wars, and he was more than up for the challenge of a character that never takes off her mask…which I think we can all agree takes a very special skill set.

JB: Will we see Captain Phasma out of her armor?

KT:  [laughs] See above! No way. As much as I wanted that – as much as we all want it – there was no way they were going to let such an epic moment happen off camera and that’s as it should be. As much as fans might initially be disappointed, I’m sure they would have felt robbed if we’d spoiled that moment instead of letting the glorious Gwendoline Christie have it…which is not to say that I know when/if it’s actually going to happen…but hope, she springs eternal! 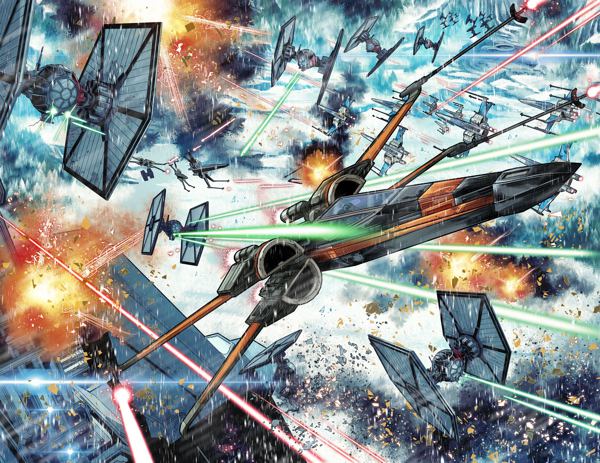 JB: Marvel has consistently shown they are telling Star Wars stories that matter. However, there are always those fans who either worry the comics will be a throwaway story or there still aren’t enough impactful women in the Star Wars universe. Will the Captain Phasma comic be something those fans can look forward to reading?

KT: Well, since we get to literally tell the story of what happens to Phasma after she escapes that garbage chute, I think this is a story that does really matter as it informs so much of who Phasma is. Phasma has tremendous potential to be an impactful character in the Star Wars universe, and judging by the fan response to her she’s already on her way. But the reality is that Star Wars is a massive ensemble piece, and Phasma is in no way the star, so I think it’s awesome that the powers that be recognize those limitations and are giving her the opportunity to be explored more deeply in other mediums to make sure that potential doesn’t go to waste. I think between her appearances in the films, and the comic book and novel fans are really going to get an excellent look at a fascinating and deeply complex character.

Journey to Star Wars: The Last Jedi Captain Phasma #1 comes out September 6, 2017. The final order cutoff date for your local comics shop is August 14, 2017. Make sure you give them Diamond Order code: JUL171161.