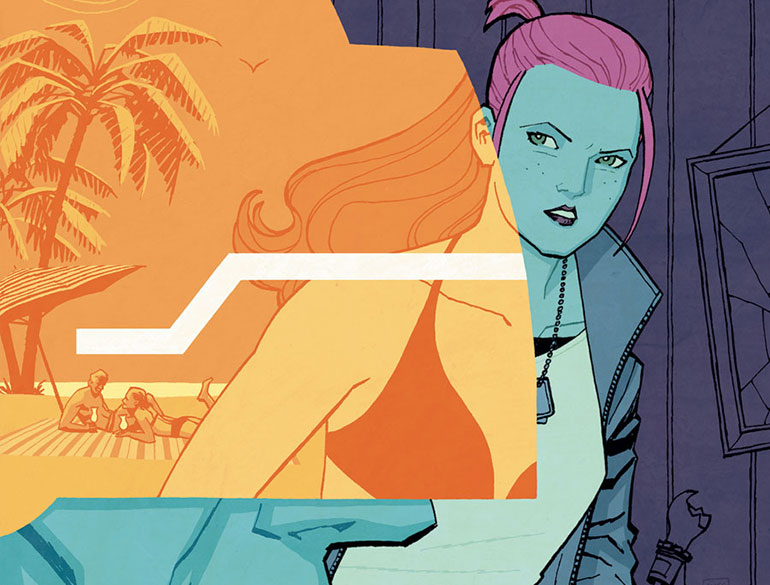 Usually, the return of a beloved series, like Elsa Charretier and Pierrick Colinet’s The Infinite Loop, a crowd funding darling and beautifully imaginative sci-fi call for solidarity with and among the marginalized, would be cause for major celebration but there’s a bittersweet quality to the occasion.

Since the first volume debuted in 2015, projecting a hopeful thesis towards a political philosophy that centered inclusiveness, long simmering tensions emanating from the political fringes came to the forefront of the political discourse in the form of the alt-right, fueling Donald Trump’s election to the Presidency, the successful Brexit referendum, and near victories for fringe candidates in France and Austria. It all adds up to a welcome home that looks like the notorious Community scene of Donald Glover returning to celebrate with a stack of pizzas to find a raging fire instead of a party. 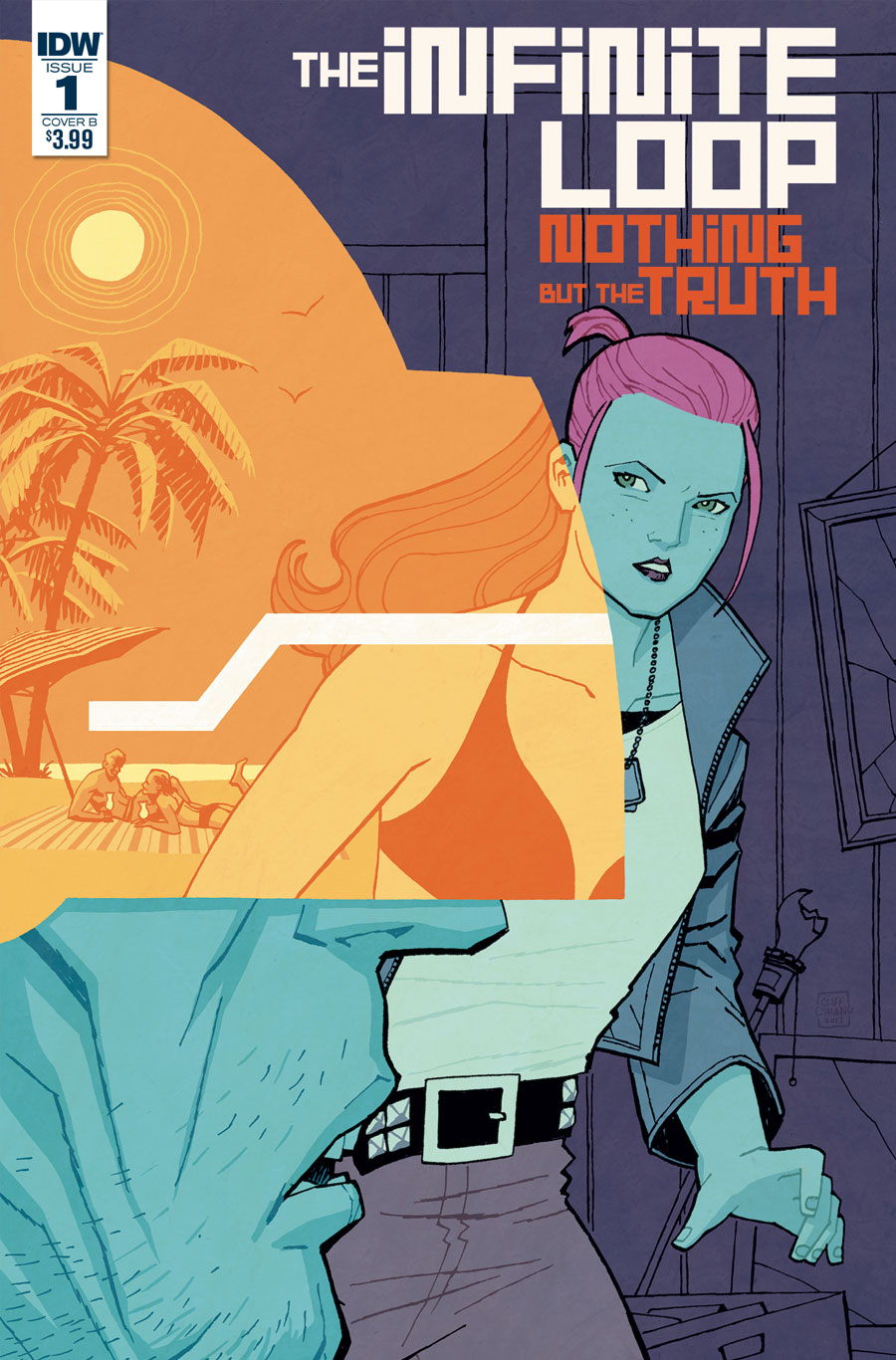 Charretier and Colinet remain undaunted, however, and laid out for me how they’re switching gears from creating a guiding light to a path through the darkness.

Véronique Emma Houxbois: Although it’s been a fairly short period of time since the last volume came out, the world has changed in some very shocking ways that tie directly into its thesis about othering marginalized populations for political and material gain.

The election of Donald Trump in the United States and the Brexit vote stunned much of the western world, and France underwent a dangerous repeat of history with Marine Le Pen coming even closer than her father did in 2002 to winning the Presidential election.

Has any of that altered the mission and tone of The Infinite Loop?

Pierrick Colinet: When we were producing the first run of The Infinite Loop, the general political and social climate -although far from imperfect- seemed like it was going in the right direction. It felt like overall, we were becoming better human beings. Same sex marriage was becoming legal in the United States and in France, and we were seeing more and more LGBTQ and minority characters in mainstream entertainment.

I even finished writing the first arc wondering if we weren’t a bit late on our time. That tells you how I wasn’t expecting the climate to drastically shift so quickly.

I see Trump and Lepen as consequences, not causes. They did surf the wave of hatred and fear, but for decades, governments have been fostering all this. Fear and ignorance allowed them to govern more easily, but they probably didn’t expect it to backfire. I have to say that even with a book whose title makes a direct reference to the endless repetition of events, I didn’t expect History to repeat itself that quickly. 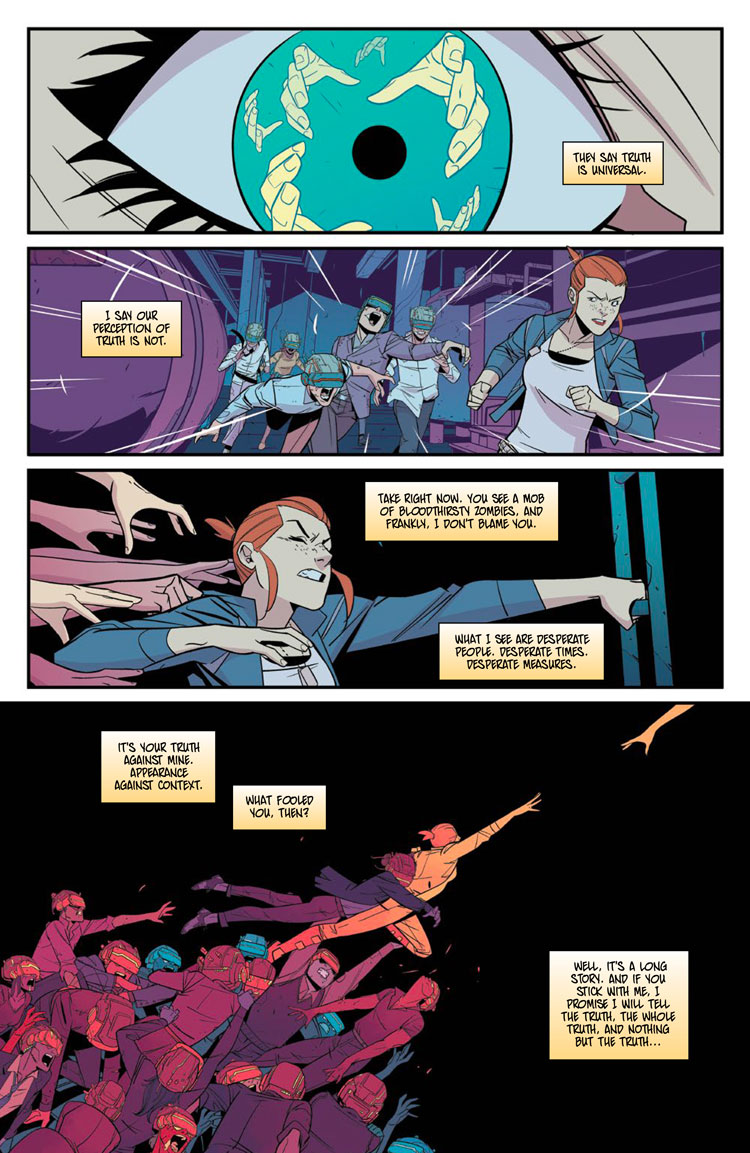 It had a deep impact on the tone of The Infinite Loop. Clearly, a humanist story, pastel, and full of hope wouldn’t have fit the current context and everything that’s happening around the world. I insist on “world”, because we talk a lot about Trump, but similar events are happening globally.

Our intent from the beginning was to do a stand-alone arc, an entry point for new readers. The new volume of The Infinite Loop is a completely new story and this drastic change of tone, in a way, made that easier.

VEH: Things have changed a lot for Teddy and Ano since we last saw them.

The first volume of the series was largely about them finding a sustainable way to be together, but the new volume is beginning with them having to separate to further their goals.

What went into that decision?

Elsa Charretier: Again, like you said in your previous question, the shock. Having them separate is deeply connected to that shifting, and the world going a certain way when everything indicated it was moving forward a different path. Same with Teddy and Ano.

We thought they had a clear path in front of them, to keep fighting for their cause, but it turns out it’s not that easy, and they’re going to have to fight through, even if it means having to resolve to tough measures. 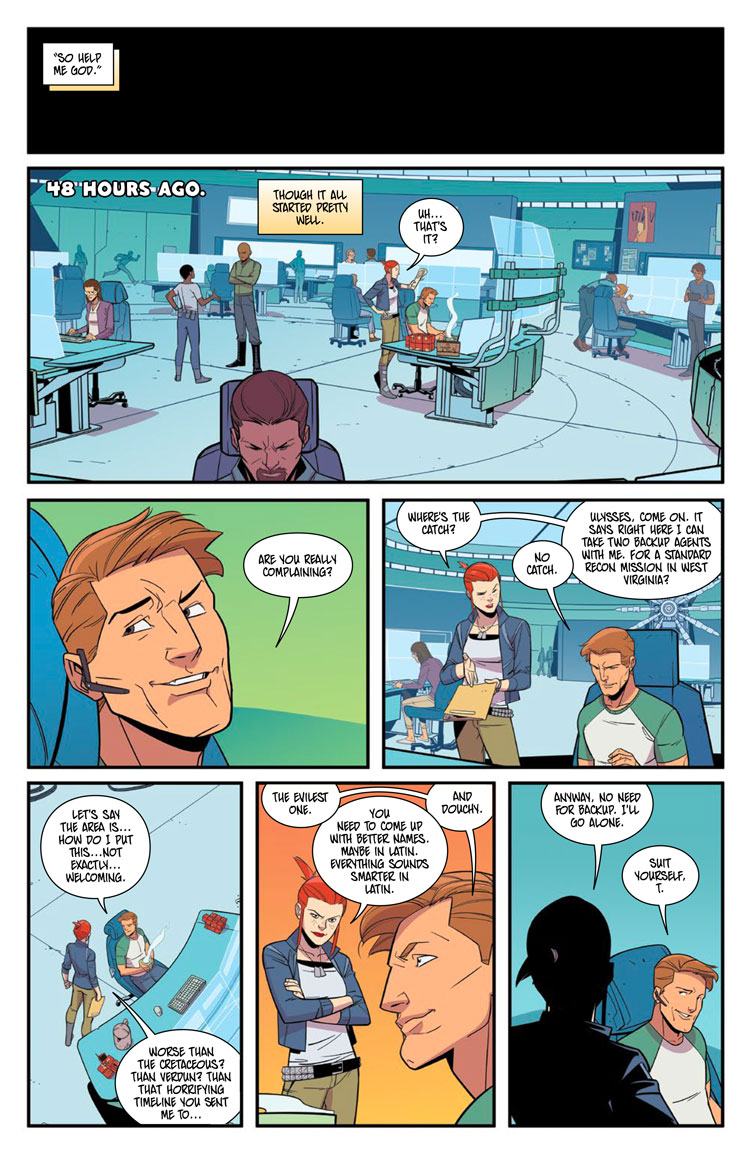 VEH: The main reason why they’re separated at the beginning of this volume appears to be so that Teddy and Ano can pursue different approaches to achieving the same goal: Ano is attempting to achieve the normalization of anomalies through legislative means, while Teddy has stayed off grid to pursue more of a vigilante angle.

Is there an intentional parallel to activist strategies in the real world?

PC: Is is intentional, absolutely. The Infinite Loop Volume 1 delved into famous Humanist movements, civil rights and the Philosophy des Lumières (which is seen as a common value in France), and it was idealistic in its form and close to the reality in its substance.

When we started thinking about Volume 2, we had numerous conversations about what is the best way to fight for your rights. Can we, as modern citizens, trust the system, its laws, its institutions, as they are today? Elsa tends to think we still can, and should, and I’m the other side of the fence.

And it fits our characters. Ano built herself through Academic knowledge and literature, when Teddy has a much more empirical approach. They want the same things, that all anomalies be considered and treated as citizens, not as second-class people, but differ on the method to get there.

Like lots of activists before her, Teddy is considered a criminal, until History proves her case. It deeply connects our theme of perception and truth, which are both at the center of the book. 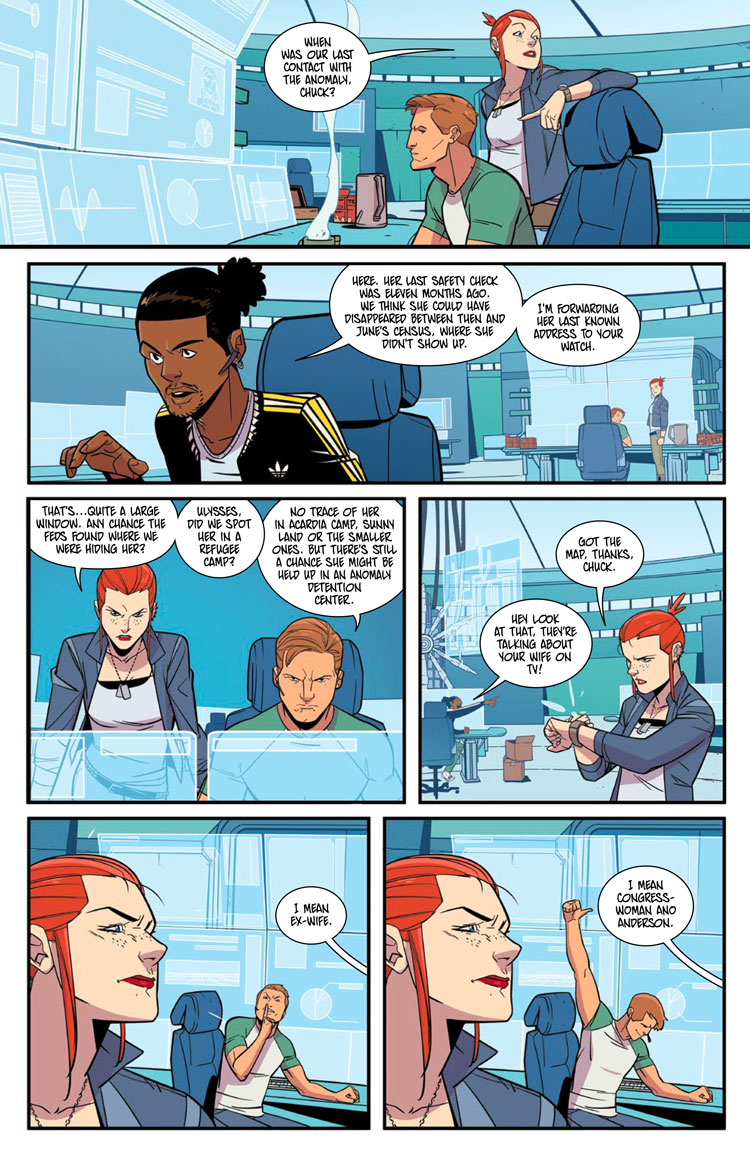 VEH: This volume is shifting from being about prejudice in a general sense to creating very specific allegory about addiction and targeted propaganda (or “fake news”). What are the pros and cons of shifting focus like that?

EC: The cons is that it forces us to take a closer look at things we’d like to forget or ignore. Reading countless articles about rural populations and how completely forgotten by governments they are, how so many people are kept in an endless loop of unemployment, drug abuse, and so many other terrible things happening every day makes it hard to stay positive sometimes.

But this allegory also shaped how this volume is written. Volume 1 was more about making our point of view as strong as possible and eventually having it win. For this story, we chose to have three characters, each one with a different point of view on this matter of truth (which actually root in different philosophical currents) and have them fight to defend their vision. 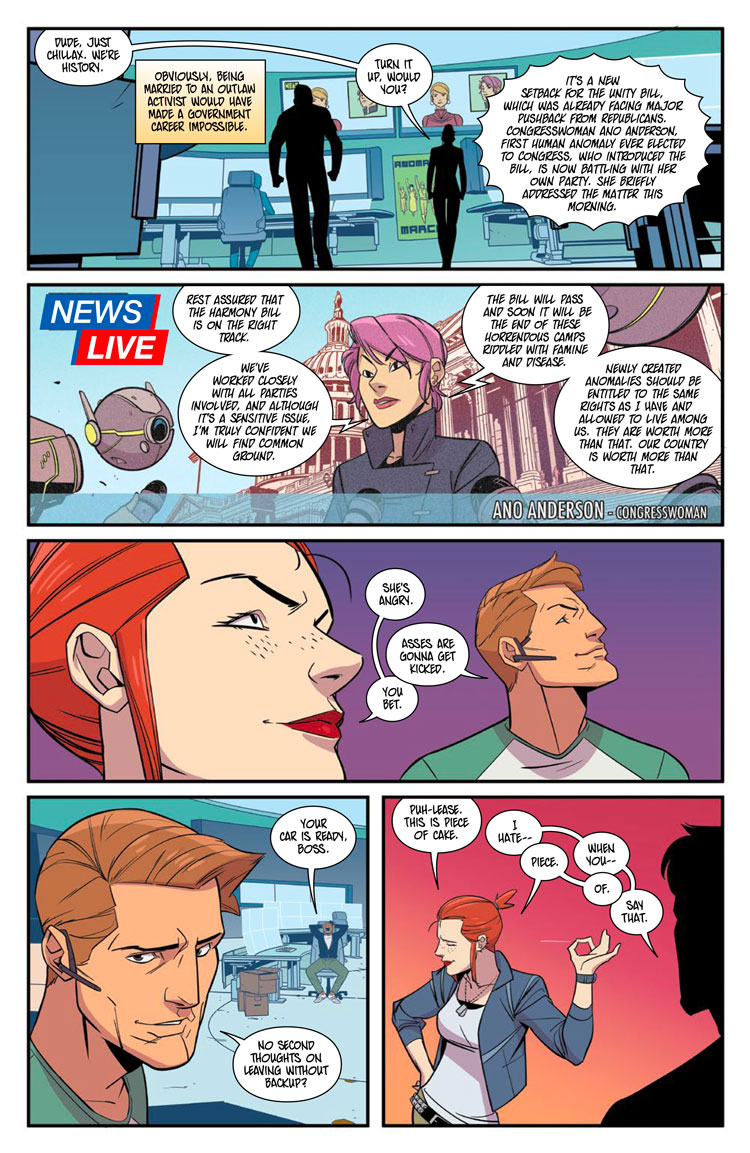 VEH: Elsa is changing roles to co-writer instead of being the primary artist on the series. What’s that transition been like? What does Daniele Di Nicuolo bring to the table?

EC: Simpler than I would have thought. I was already involved in the writing in the first volume, to as lesser degree. I mostly helped Pierrick finding solutions whenever he was stuck, and the peculiar storytelling we used on some of the pages was something we had to develop together.

So going from that to actually co-writing was a big leap. But we’ve known each other for a long long time and we’ve found a method that allows us to fully collaborate without stepping on each other’s toes. We plot together, going into details about each issue, each scene.

After that, Pierrick will write a first draft, and I’ll come back at the end, when we both re-work it. I also do another final pass to adjust storytelling details before sending it over to Daniele.

From the beginning, I was really existed by the idea of having another artist draw “my” character. We were rather specific in what we were looking for, and Daniele is a perfect match. He brings his wonderful style which still has that cartoony vibe but his line are also a bit more “dramatic” than mine, more “adult”, which definitely fits everything we talked about above.

And Sarah Stern’s colors complete Daniele’s inks perfectly. We’re lucky to have them both.

I do have to admit that writing for someone else, as an artist, has had its challenges. When we think of scenes, I can’t help myself but picturing them and think of how I would approach the storytelling. So when we get his pages, it always takes a minute to forget my preconceived notions of what the page could look like to let room for Daniele’s own interpretation. 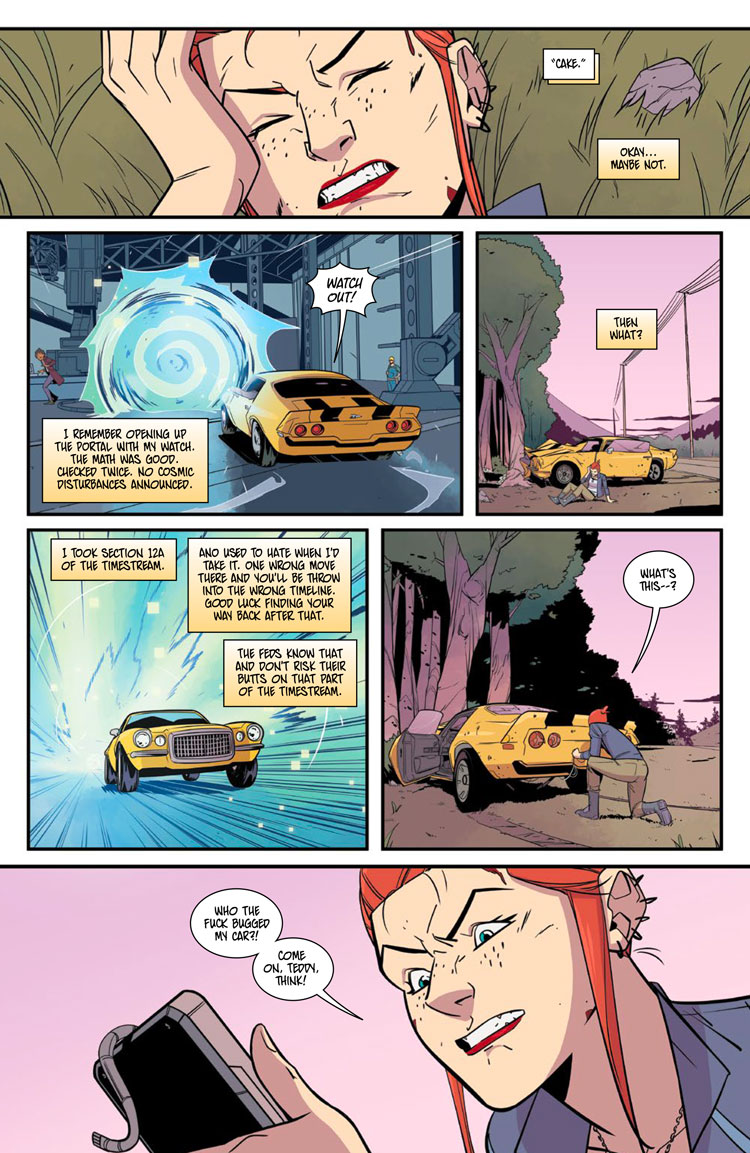 VEH: Finally, what should TIL fans be most excited for from this volume?

PC: So many things! I think they’ll love to see Teddy and Ano grow, interacting with new characters that will confront them, seeing them go through their darkest time and still, always, fight tooth and nails for their beliefs.

IDW Publishing returns to The Infinite Loop with Nothing But The Truth #1 (of 6), in stores September 27, 2017.