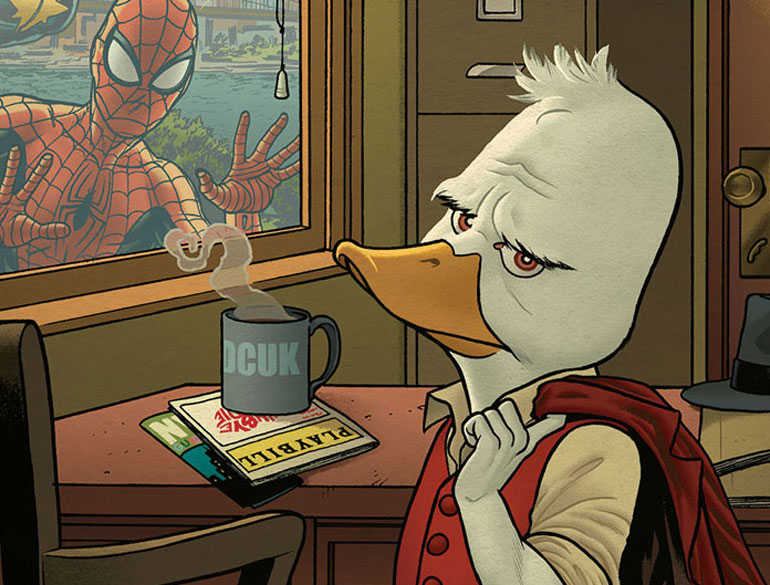 After a surprise appearance in a certain Hollywood blockbuster, Howard the Duck has been on the tip of the tongue for many comic fans on when, not if, he will be making his comeback to his own series. Chip Zdarsky (Sex Criminals) and Joe Quinones (Savage Wolverine) have been tasked with the reboot and hit the ground running.

Chip Zdarsky graciously took time out of his day to talk more in depth about if Howard the Duck will do more than stay on Earth and who he can expect to encounter in his day to day life of a private investigator.

Maxwell Majernik: It’s been awhile since we’ve seen Howard on the scene in a big way. How did the project first come about?

Chip Zdarsky: It was pretty straight-forward! I wish there was some sort of exciting story of how I saved the editor’s life in a bar brawl or something.

The editor, Wil Moss, was a Howard fan and asked me if I had any Howard ideas. I was really into the book as a kid, so having Howard ideas was not a problem. But it was funny, at no point did I actually think I had the job! I pitched ideas, he liked them. We talked about artists. I did a cover, a cover logo, wrote a script, etc. It just felt like a fun game of chicken, and next thing I knew there was a full issue with my name on it! It’s weird, man. Real weird.

MM: Howard the Duck will be a P.I. in this series. What type of cases will he taking on and will he possibly go beyond Earth to solve some cosmic mysteries?

CZ: Howard’s never been known to stay very still, so, yeah, cosmic adventures are in the cards. The cases may seem mundane; recovering jewelry, finding a lost cat, but nothing is ever straight forward. God, imagine if they were? I should totally do an issue where Howard gets a case to find a lost cat, he scours the neighbourhood, finds the cat, and returns it. NOTHING unusual happens. I smell Eiiiiiisner!

MM: From the preview pages released, there are many characters appearing from the Marvel Universe. Can you give away a few other Marvel residents that will show up?

CZ: Oh man, as many as I can manage. My assumption is that Marvel will come to their senses and fire me by issue three, so I’m putting in all the characters that I’ve wanted to write since I was a kid. Spider-Man shows up in issue one so I can at least have “wrote some Spider-Man dialogue” on my tombstone. Also, Spidey helped Howard kick off his original series! I’m a sucker for stuff like that.

MM: Howard the Duck has a past full of interesting villains (Doctor Bong comes to mind). Will much of Howard’s past affect him in the new series?

CZ: Yeah, a bit. I want to strike a balance between keeping it accessible to new readers while acknowledging what came before. It’s hard, man!

There’s also the thing of Steve Gerber, Howard’s creator, being so wildly imaginative with all the characters he introduced, that I want to maintain that tradition and introduce new characters as well.

MM: This is your first full comic writing gig for Marvel. Was there an adjustment from doing creator owned work to writing a character in a larger, shared universe?

CZ: Oh, for sure. On Sex Criminals it’s just Matt and I, really. With this, there’s a whole universe of characters and ramifications to consider. I mentioned earlier about using Spider-Man, so that request had to go through the Spider-Office for approval. Like, what if Doc Ock’s mind is in Spider-Man’s body that month? Nothing is ever straight-forward.

MM: You’re currently the artist for Sex Criminals, but for Howard the Duck you are on writing duties with Joe Quinones handling the art. How has it been flipping roles for the series?

CZ: Oh god, it’s the best. I write things and someone brings them to life! I AM LIKE UNTO A GOD NOW.

The only downside is that whenever I see Joe’s work on the book I’m reminded that I’m not a very good artist.

Howard the Duck #1 is on sale March 11th from Marvel Comics. You can also find Chip Zdarsky on twitter at @Zdarsky