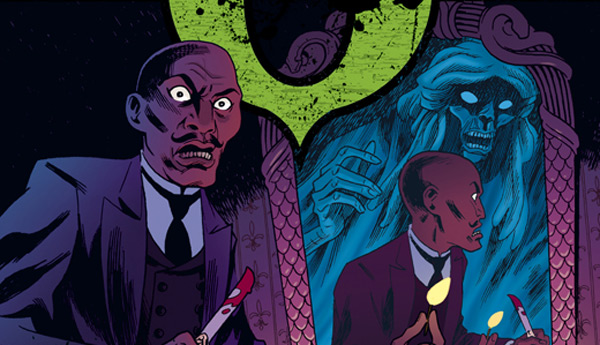 Welcome to the first in a series of interviews focusing on the Eisner award nominated titles from Oni Press. In this first interview, colorist Bill Crabtree discusses his fantastic (and Eisner nominated) work on The Sixth Gun.

Aaron Long: First off, congratulations on the Eisner nomination! Do you remember where you were when you got the news? 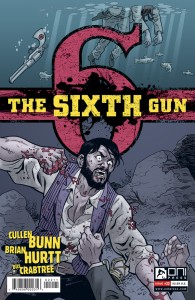 Bill Crabtree: I was in my house, coloring something or other when I got the phone call.

AL: Will you be attending SDCC and the Eisner ceremony?

BC: Sorry, no, I won’t be attending. But people can find me on Twitter: @crabtree_bill.

AL: The Sixth Gun isn’t colored like most westerns that stay in only brown tones. Was the choice of colors your decision? A collaborative choice with Cullen and Brian?

BC: When I started on the book, Brian was very specific that he did NOT want the book to be all browns and sepias. He had already colored the first five issues, so I had an idea of what he had in mind: some dark and somber colors, mixed with brighter “pop” colors especially when conveying the weird or supernatural, which obviously the book has a lot of. 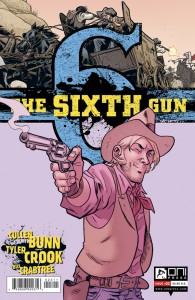 BC: Most difficult issue to color? That’s a tough question, but the winner would have to be either issue 6, which was the over-sized Battle of the Maw, or issue 21, the over-sized silent issue. To the readers’ delight and my chagrin, Brian doesn’t skimp on the details when it comes to drawing elaborate battles scenes and environments! My favorite thing about coloring this book in general are the various locales and moods that Cullen and Brian’s work calls for, be it a swamp or a snowstorm (spoiler alert!). I’m not sure I’ve had a favorite issue to color, in general the most recent issue to come out is the one I’m most pleased with. Or more accurately, the one I hate the least, perfectionist that I am.

AL: You’ve got The Sixth Gun you are working on, what else is on your plate that Comicosity’s readers can check out?

BC: In addition to The 6th Gun, I’m also coloring Bad Medicine for Oni Press as well as Mudman for Image. Stylistically it’s a nice variety for me, I use a more textured, painterly style on Chris Mitten’s expressive drawings in Bad Medicine, while Paul Grist’s elegant understated art is colored in gloriously flat tones on Mudman. I’ve also got something very exciting in the works with Jefferey Brown, which should be anounced later this year.